I now have 760pts of Dark Angels complete and despite the creative problems from the beginning with Dark Angels green I think I've managed to create a cohesive force. There's all sorts going on colour wise but I think overall they've managed to at least be consistently coloured. 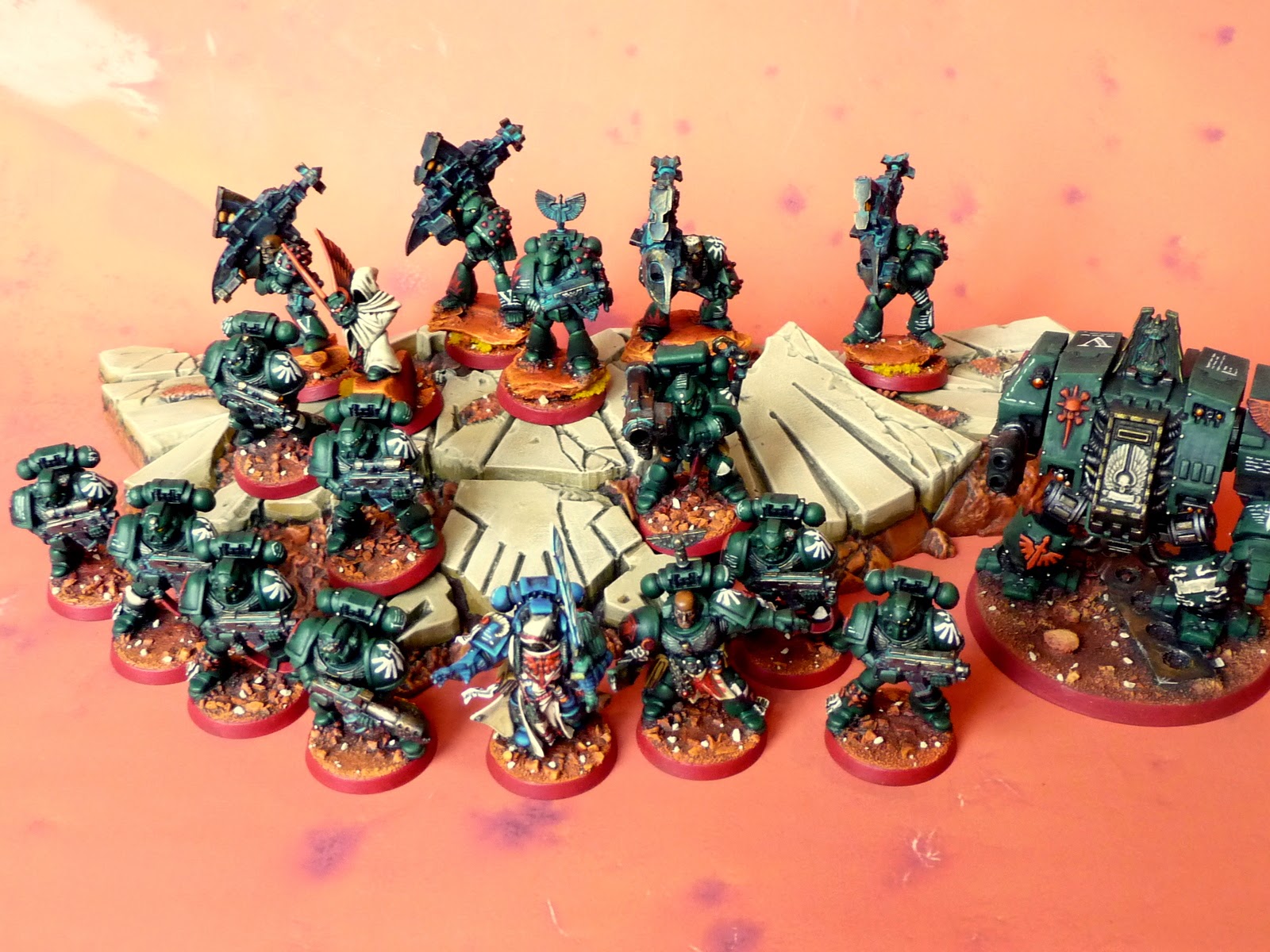 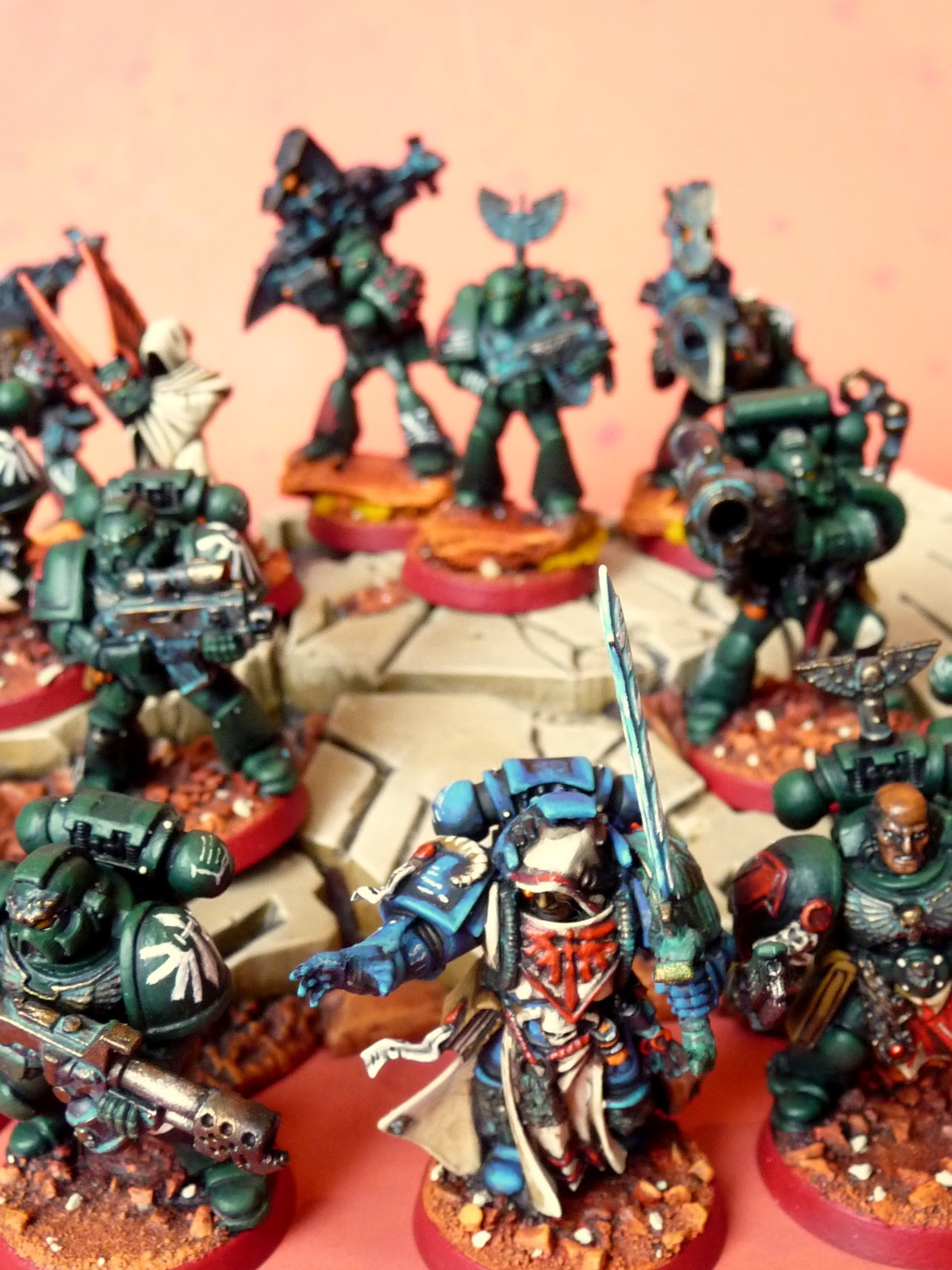 Thankfully the Tacticals and Devastators match up nicely. 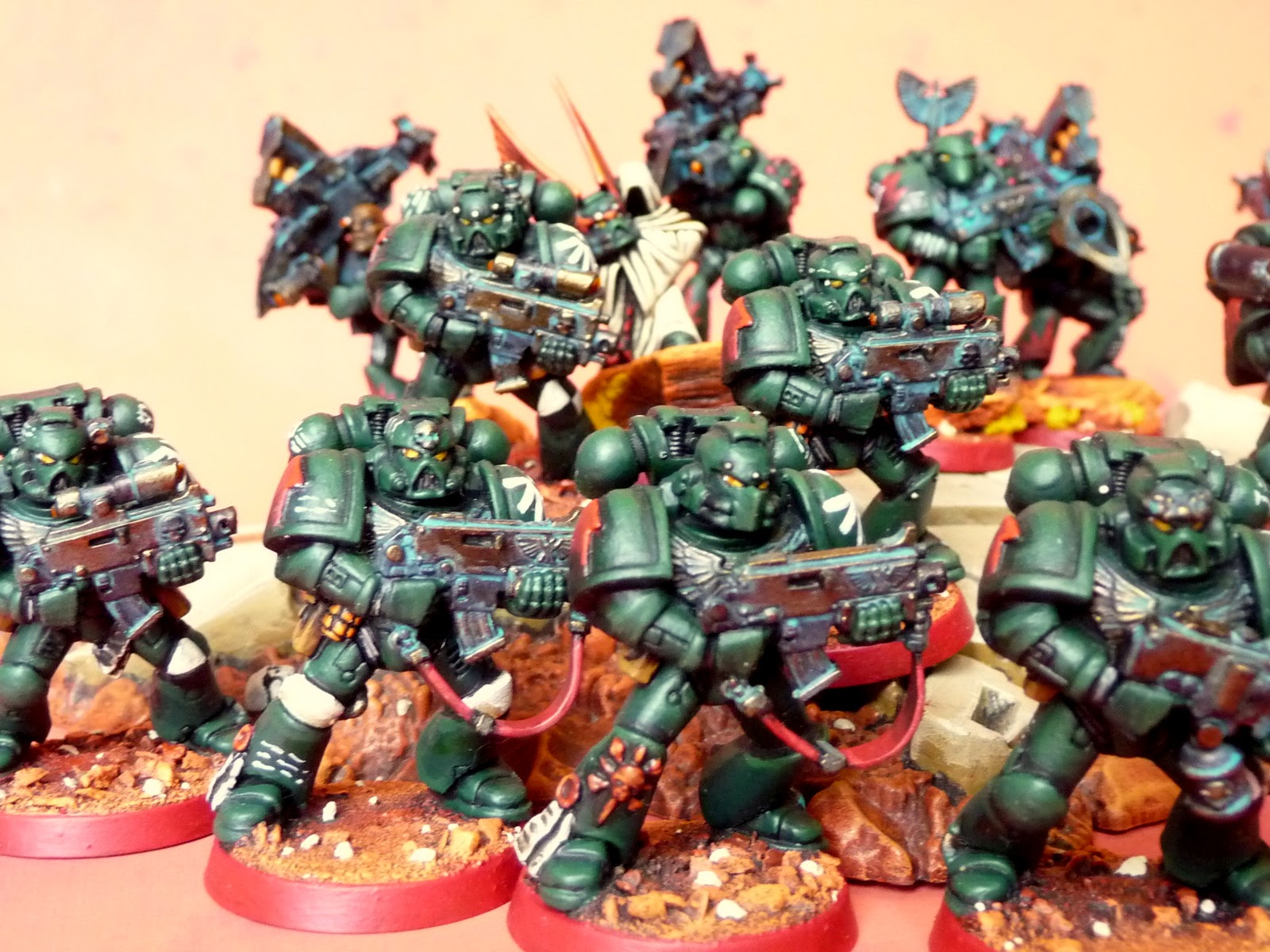 And they even fit in well with Brother Cask. 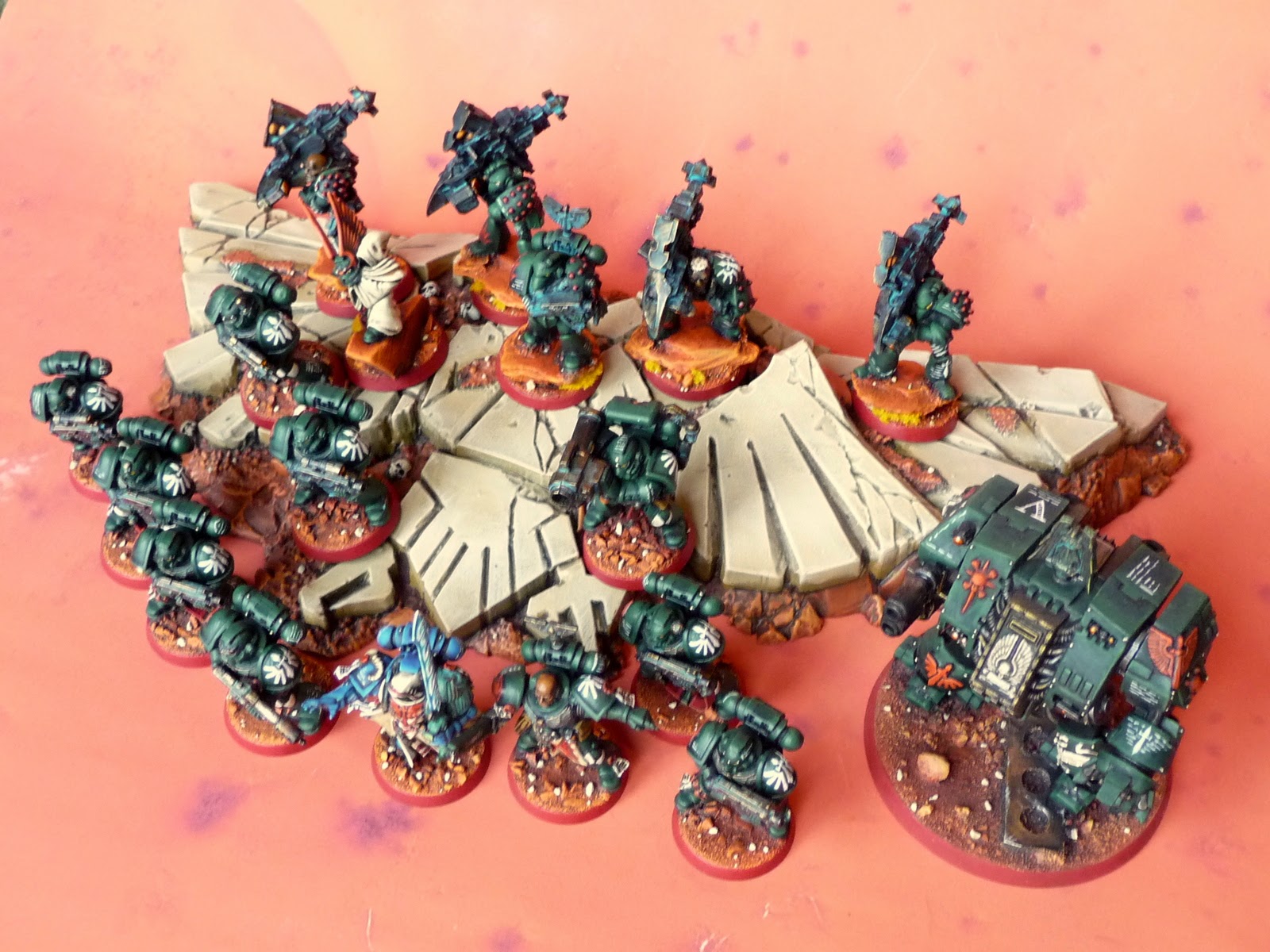 And the little Watcher too takes a place of honour amongst my 'green wing'. 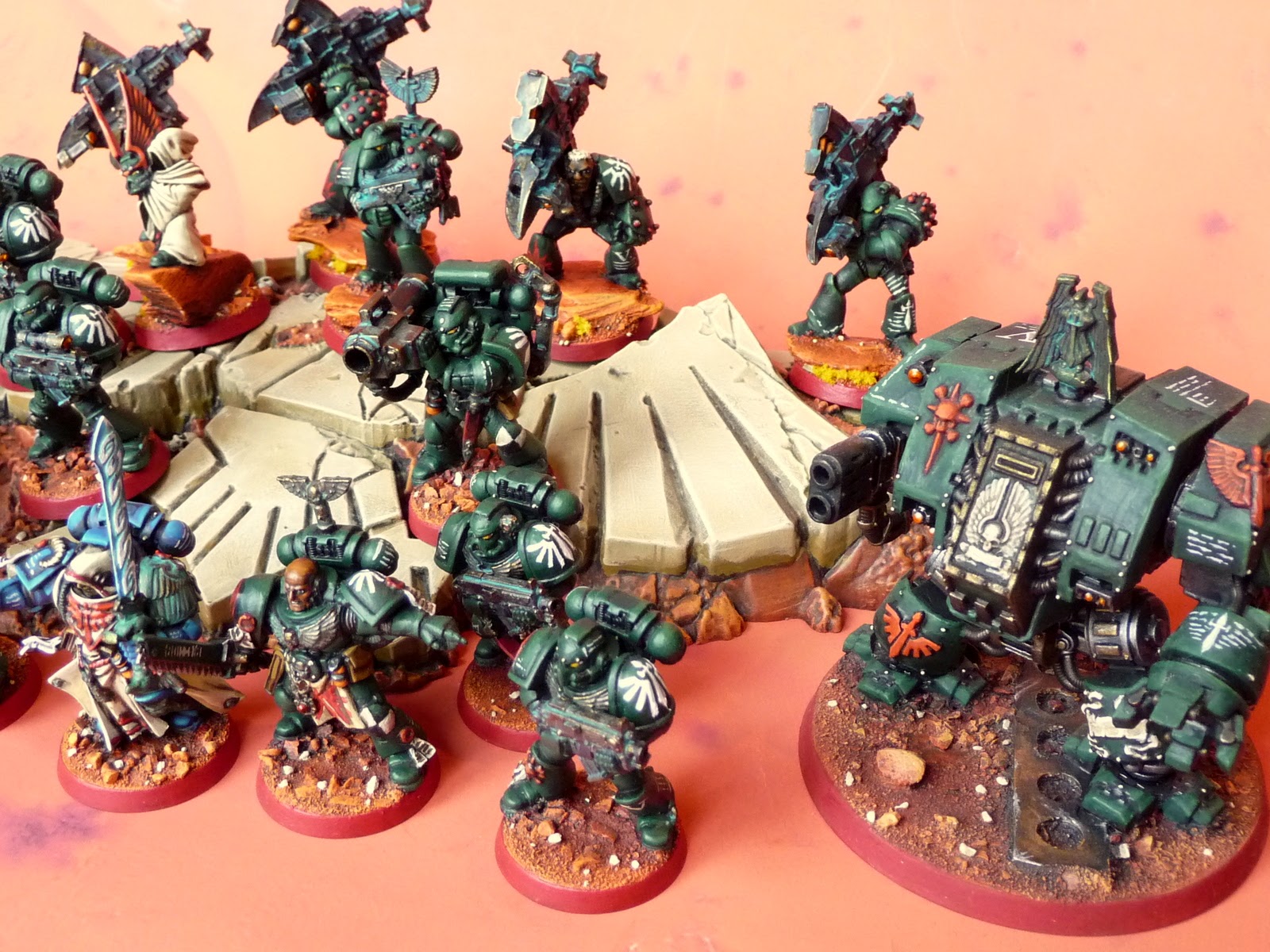 Together with the Deathwing they make a compelling force. 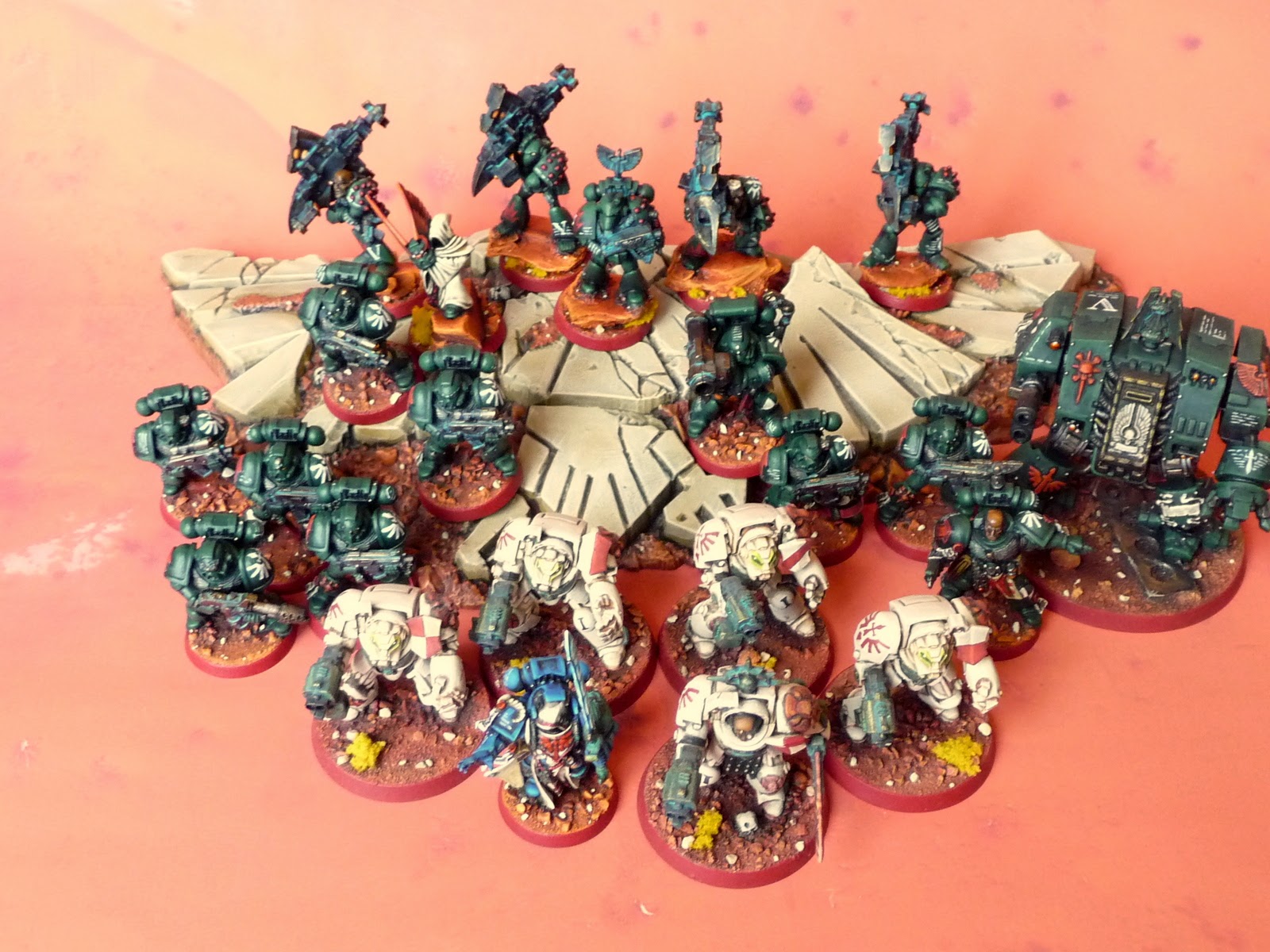 A subtle difference in the colours of the bases but I think that's to do with the later adoption of my Pumpkin highlight which I can easily add just a little to the older bases to make them current. At least the bronze patina and reds, both on the models and base edges tie the remaining colour elements together in this force. 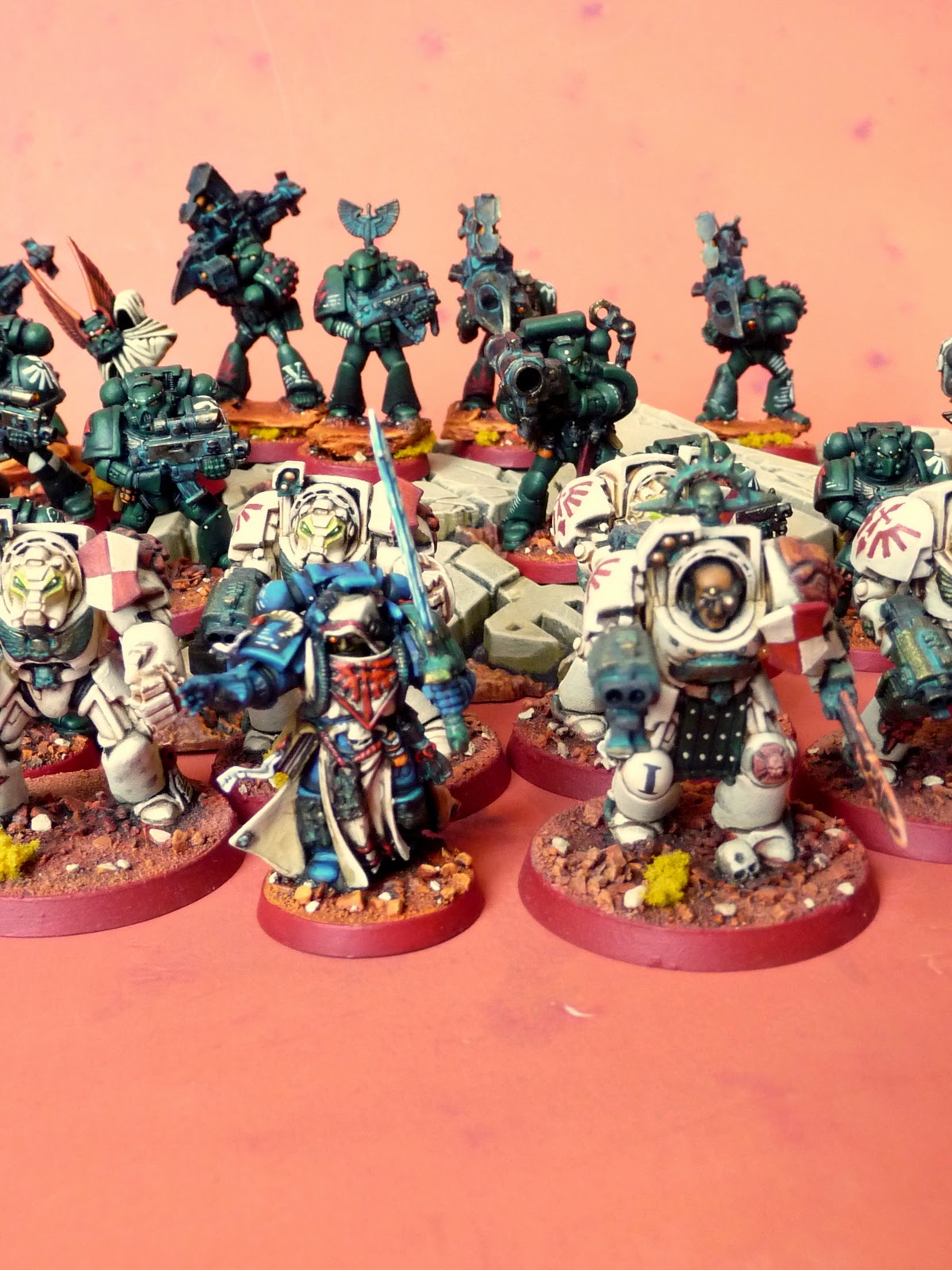 Still not happy with his green loin cloth and lack of markings on the scroll on his chest. I'm thinking of making his heraldry badge pure white [or a 'field of silver' as it's officially known, I think] with some more extra markings on 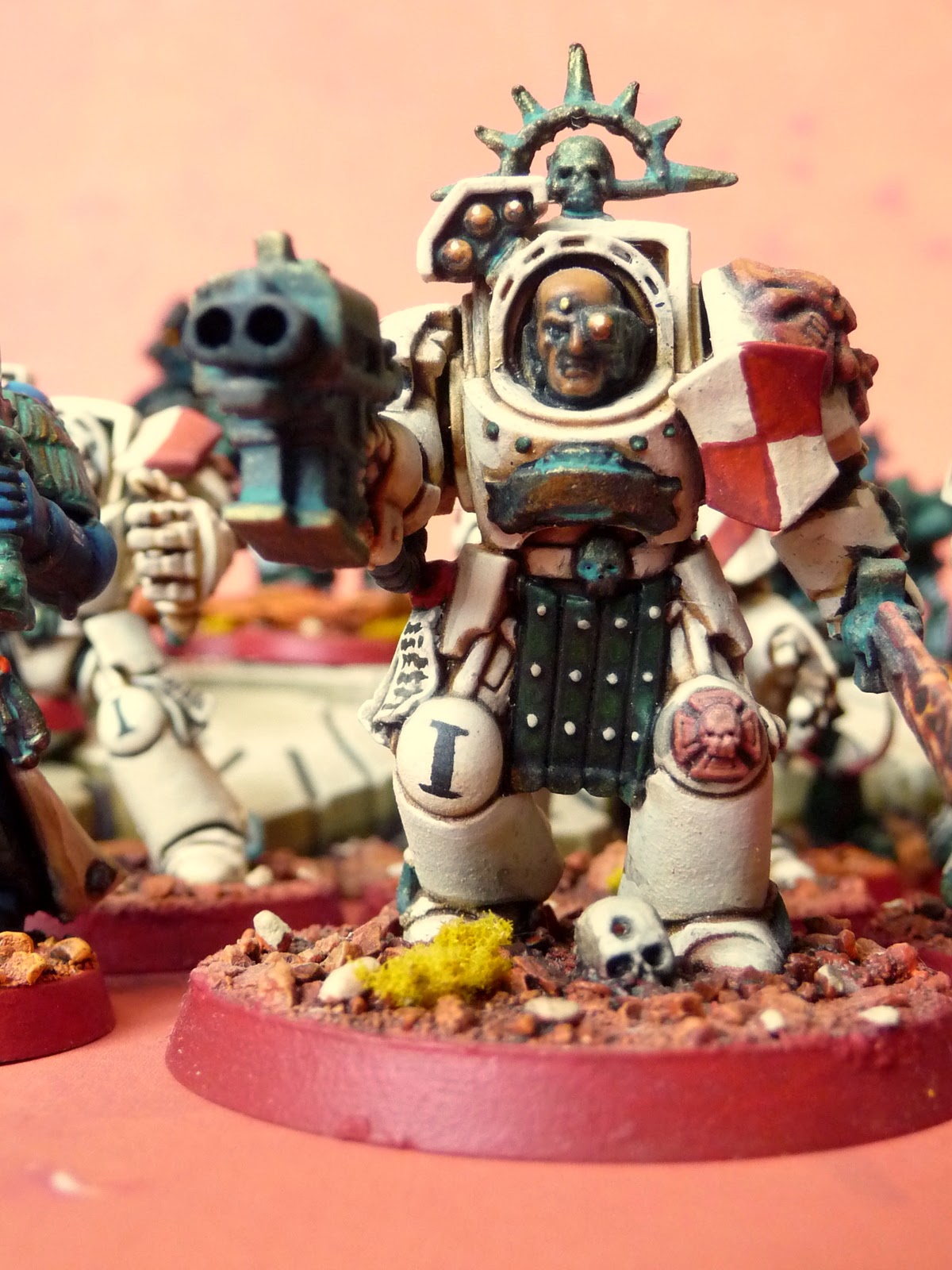 Just what is that Sergeant pointing at? I never realised until now how daft that pose was. 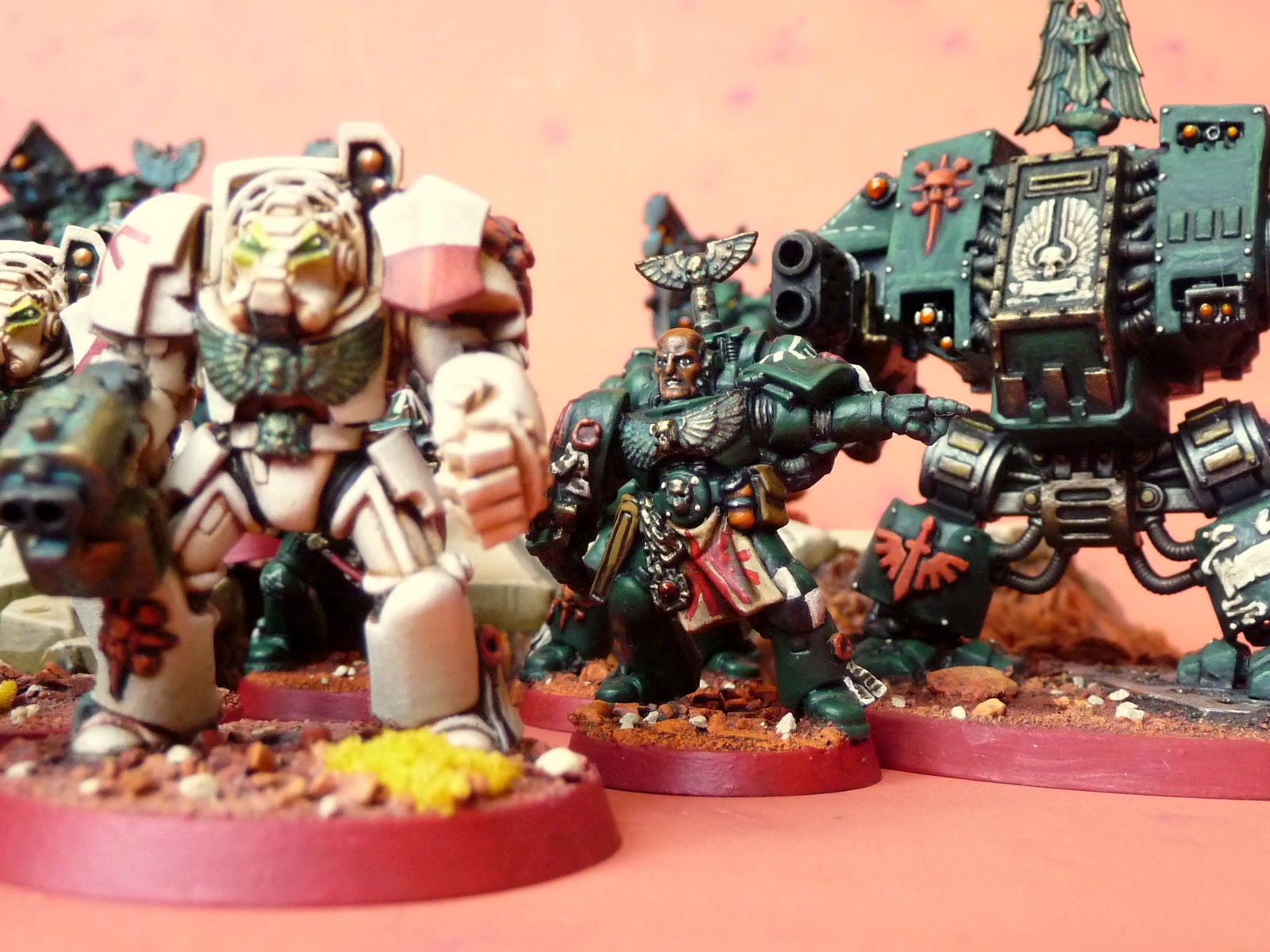 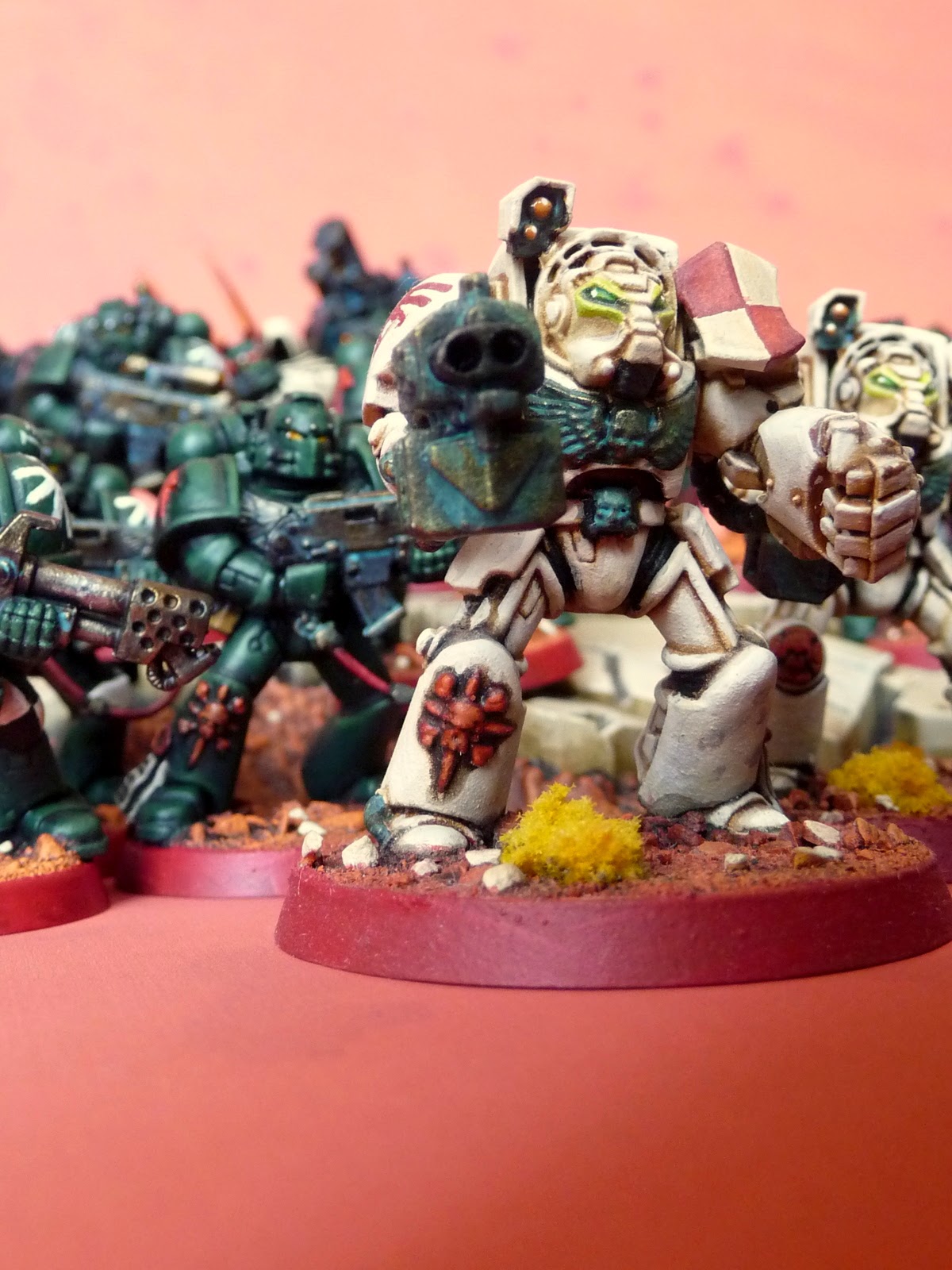 Oh yeah, the new missile launchers have so much character... 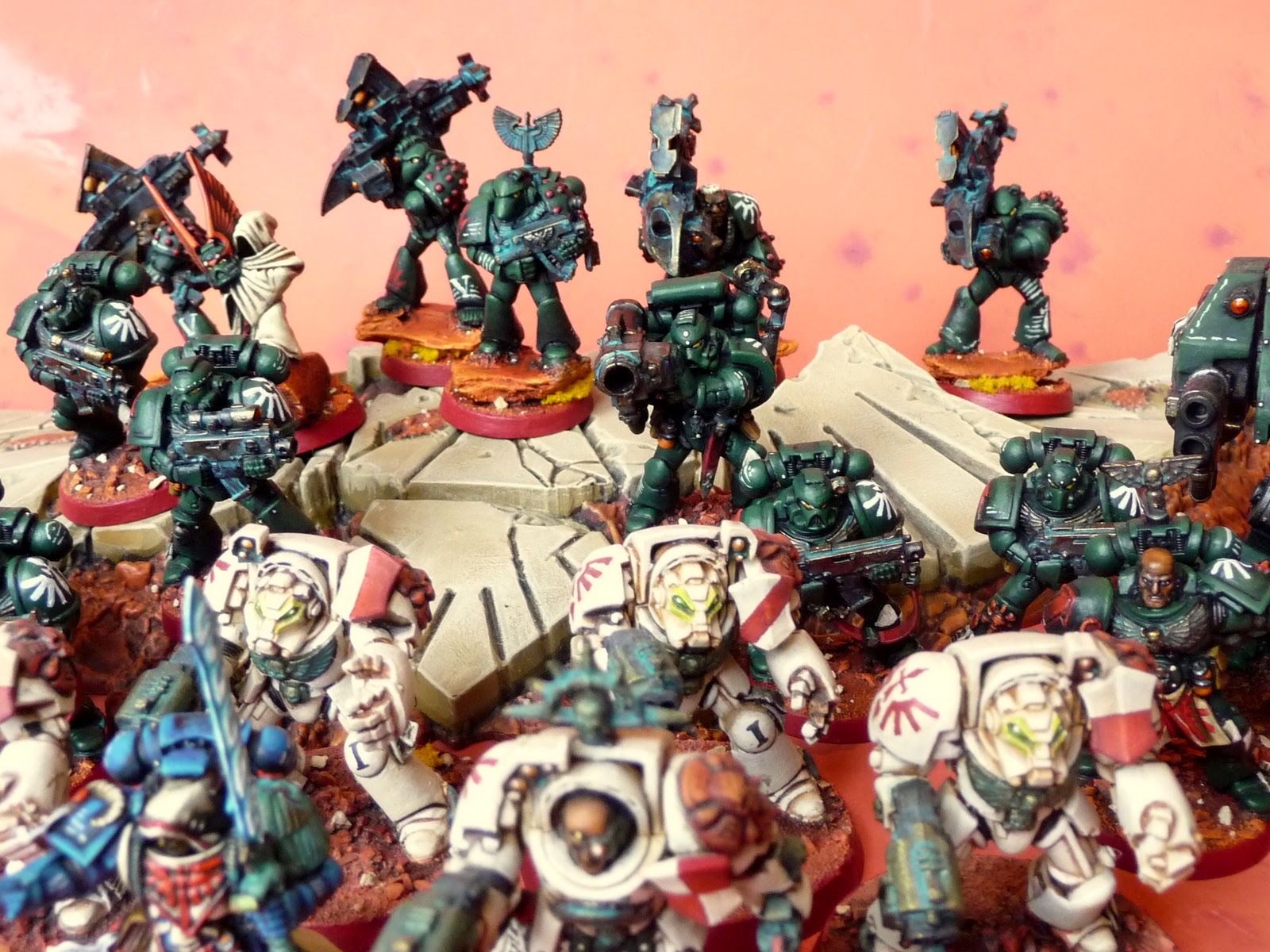 Cask needs his name on his shin guard. I have a fine technical pen but when I added Army Painter Anti Shine to seal it it did the opposite and made the archive ink run! I wonder if I should have had a glow effect on Casks vision slit? And you can also see the vagaries of Army painter Anti-shine in that Cask's base edges are super matt, while some of the other bases are almost satin. I may whip over the edge with another coat of Vallejo Extra Opaque Heavy Red. I've said before, it is in no way similar in opacity to the old Mechrite Red but three or four coats and it has a gorgeous richness that Mechrite never had. 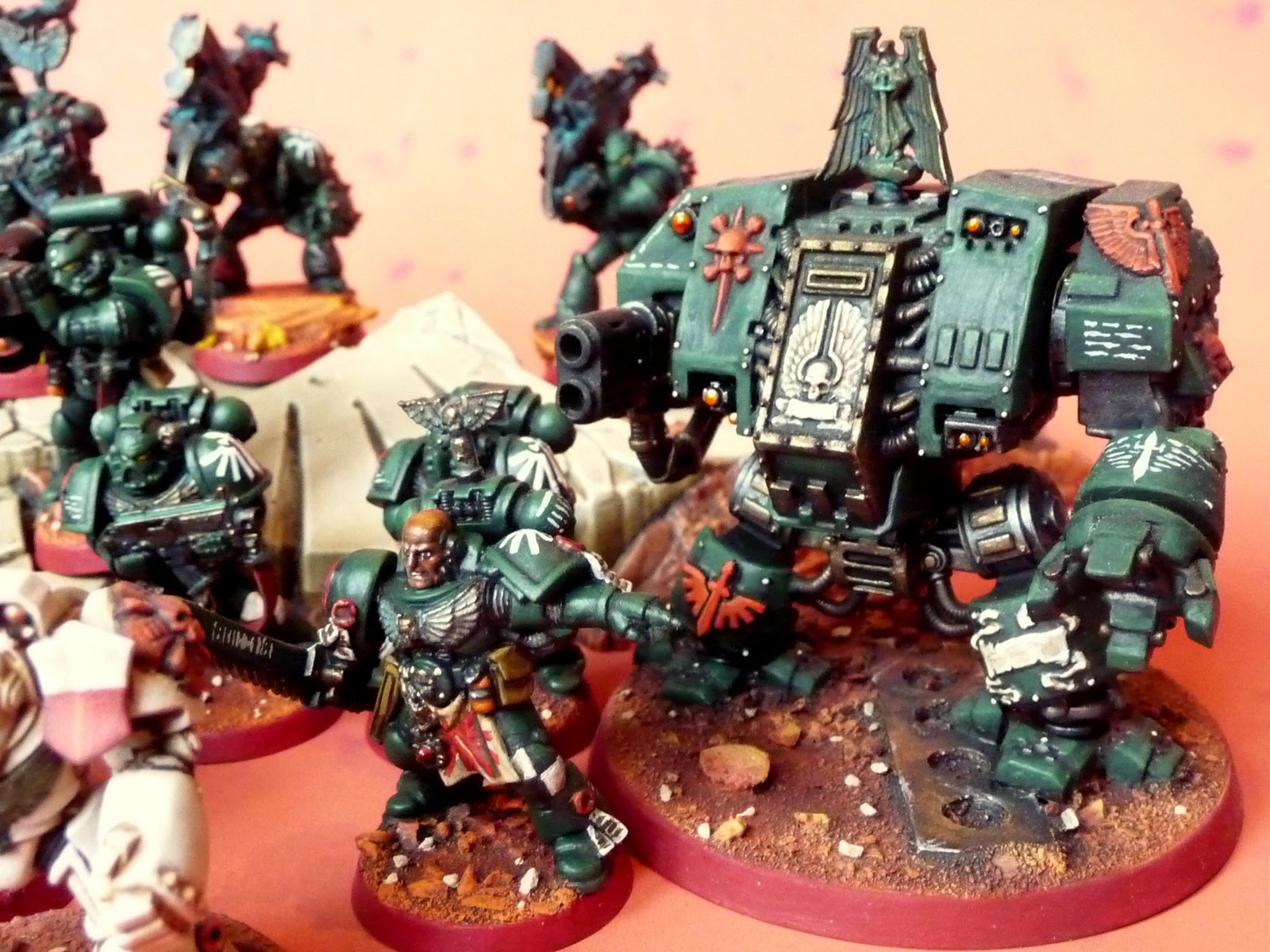 Now I basecoat the edges with Mechrite, for coverage and then add the Heavy Red. My various pots of Mechrite have weird properties too, some are matt as my original pot was, some are glossy. I think this is down to them needing a proper mix which unfortunately given the dwindling supplies makes that harder to achieve, hence why I now Mechrite and then Heavy Red. 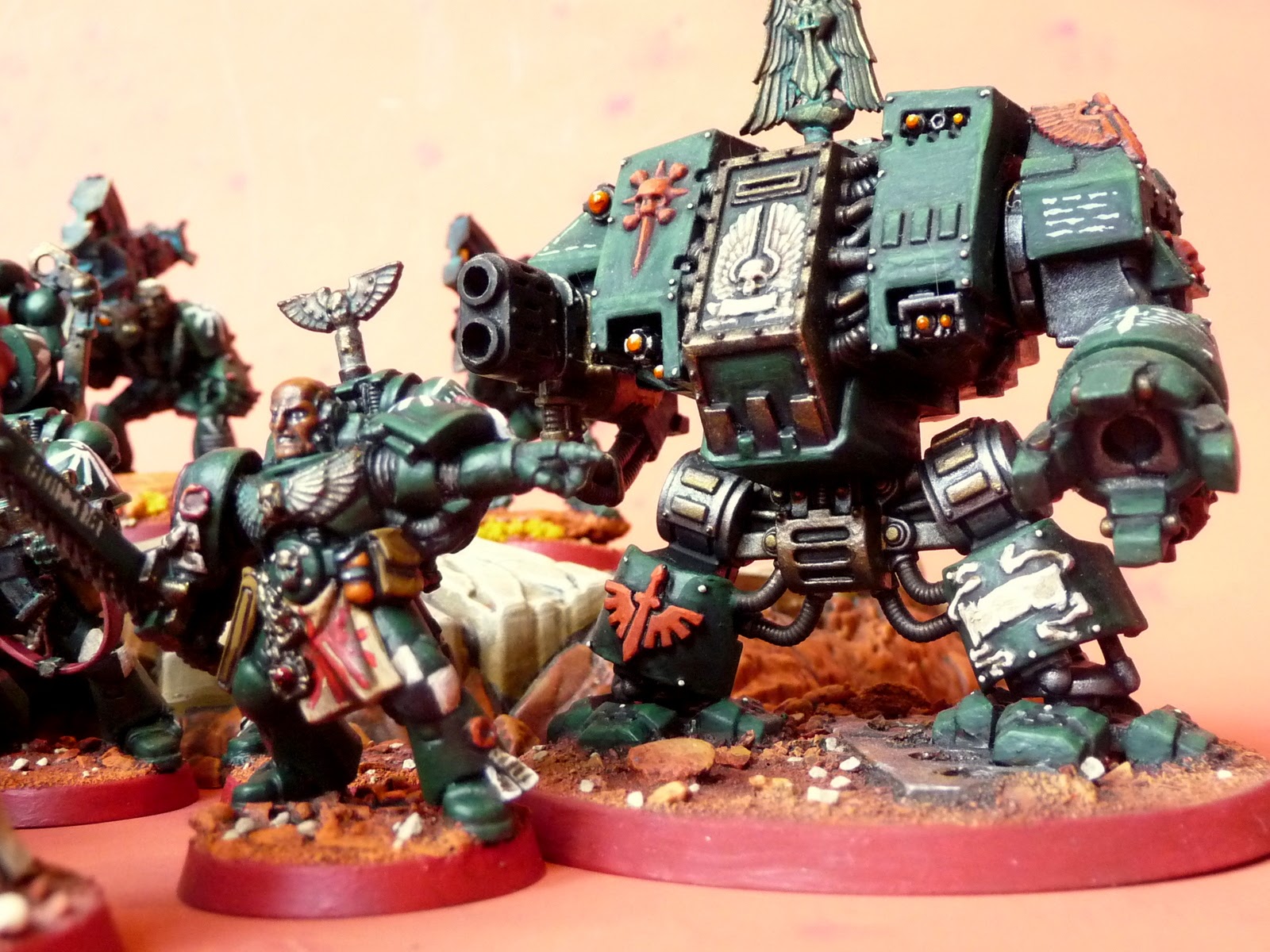 So, next up is the Dark Vengeance Tactical Squad, that's at the green highlights stage. Its laborious but I've found my cack-handed attempts at wet blending relatively simple. I can get one or two highlighted a night and then it's all the fun elements of adding details. I'm not sure why I've got these on my To Do list, they're not even part of my basic Army List. But they look cool and green wing is both interesting and less offensive to me [creatively] than the Ravenwing.

I've also got my Dark Vengeance Deathwing on the go and I'm up to the same point - main armour highlights, only Bonewhite this time, not Caliban Green. Again, not something I can afford in my list but having ten terminators gives me options, I just need to decide who gets the Cyclone Missile Launcher - on e of these guys or one of the less dynamic but more in need of making them look individual Assault on Black Reach termies...?

Then it's Ravenwing :( and also a look at some transports which thankfully are on both my lists, or at least some of them are ;) I can't believe I'm actually getting some of these done