When I started getting interested again in the hobby [read falling off the wagon] it was right at the last release of Space Hulk. I saw that it was a limited edition and I tried to weigh up getting it as it only had a few miniatures that my son and I needed to paint and would be an easy entrance into gaming for him. Alternatively I could get 5th Edition 40k which I knew I would ultimately want too.

In the end I waited and missed the boat. I always regretted that decision. I desperately wanted the cool Genestealers [although I have since got many of the more generic ones from the set] and the Terminators, though Blood Angels could have been converted to their Fallen brothers. Not to mention the many fond memeories I have of playing it with my mate Chris, back in First Edition. And it's a cool game to boot. Eventually my Mother-in-law gifted me 40k for Christmas and so my descent into hobby bliss continued. Obviously since then I've looked at many ebay auctions with envy and regret so to hear a re-issue of this edition was imminent was very exciting to me...

I'm pretty sure the reason I've lost interest is the price. From what I recall the previous limited edition was £60 [or £65] this new re-issue is £75, so we're talking a 25% increase on something that already exists, something that's unlikely to require new molds, thereby making better value of those already made. Now that's not to say that that's not still a bargain compared to ebay prices but those prices are only inflated due to the limited run from 5 years ago.

So that new price has gone over my tipping point, and that's baring in mind I didn't buy the hardback copy of 7th Edition or Stormclaw that I intended to, so I could argue I have the funds. Granted I bought other things instead but I just can't justify to myself that price, not at the moment, despite wanting it so badly.

Now ERIOCHROME posted this article the other day that echoes many of my own feelings but I can only reiterate the single biggest mistake in this is a limited run. It will make the ebay market a little more competitive, that's all. If it was still £60-65 and it was available all year I would definitely be able to plan ahead to take advantage of that but given the tiny lead-in time of a weeks notice then I can't shoehorn in a purchase of that scale. Sure I'm having a loft conversion done and that isn't cheap either but that is part of the problem, I'm seeing £100's and £1000's going out on a daily basis and I look at my office chair in the 'hobby room' that's been broken for about 3 months now which I've delayed replacing and in all good conscience I'd rather have that done, so I can paint/browse the internet in comfort than fork out for more plastic.

Oh and Mrs 40kaddict said no!

Anyway I do have some new Genestealers to paint and these are they. The funny thing is I never bought them, erm I didn't steal them either, although I thought I might have. What happened was they arrived in the post from Triple Helix Wargames, via what I believe is their ebay trading arm which is aa-wargames [or something like that]. I opened it and was really excited, had I won something only to forget? But I didn't remember paying for it either. Now I immediately though 'Free Stealers' but then I thought no, these aren't mine and someone would be expecting them and the sellers ebay rating would be affected. So I searched for completed listings and found the auction, found the seller and knew then that it was in error. So I rang Triple Helix and left a message and then also sent a message via their contacts page but never got a response so actually forgot about them over the last fortnight. 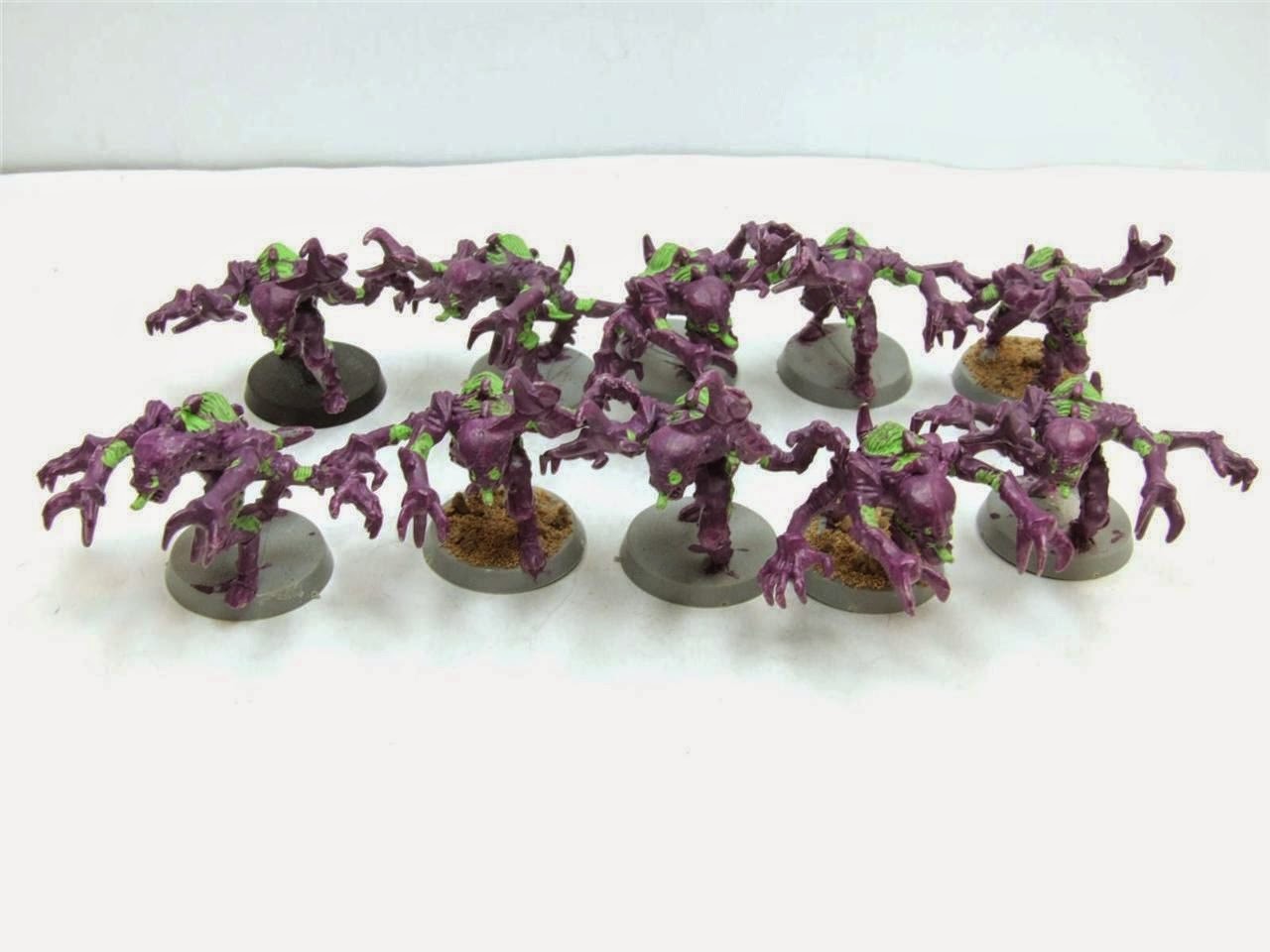 The funny thing is I started getting some cryptic messages from an old Kendo buddy Tom Widdows about bitey things and claws and teeth. Tom is an actual British Kendo Squad member and practices in Manchester. He's the guy on the left in the picture below with my friend Joe Willmott. This was taken at a fund raising event for the victims of the Japanese earthquake where we put on a demonstration and I first discovered Tom also had a passion for 40k, when I saw he had a copy of Gaunt's Ghosts with him. 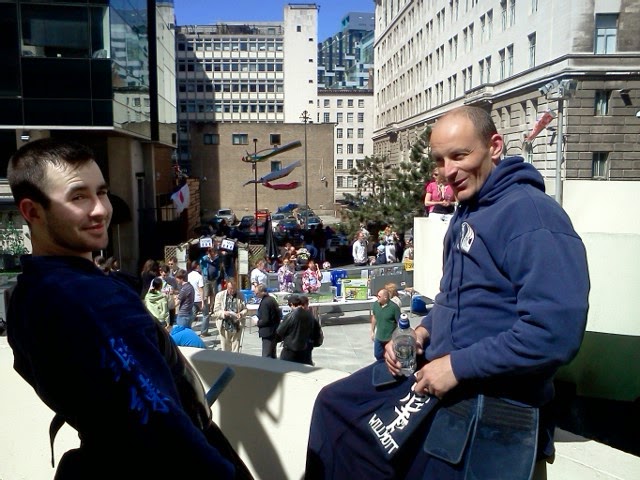 When I was able to practice kendo I was a little in awe of Tom. Although I had a few years more experience on him he'd clearly crammed in a lot of training which had accelerated his learning and meant he graded quicker than I. When you add in youth, enthusiasm and a bucketload of talent I found myself learning an awful lot from those practice sessions. An absence of ego is a key element to kendo, something I continue to struggle with but believe in and seeing someone better at something you've spent longer doing is a humbling experience but ultimately rewarding. Since I had to give kendo up we've kept in touch and he's shared quite a few of his hobby related activities on my Facebook group these Eldar being the most recent but there's some crazy tru-scale shenanigans from way back too. 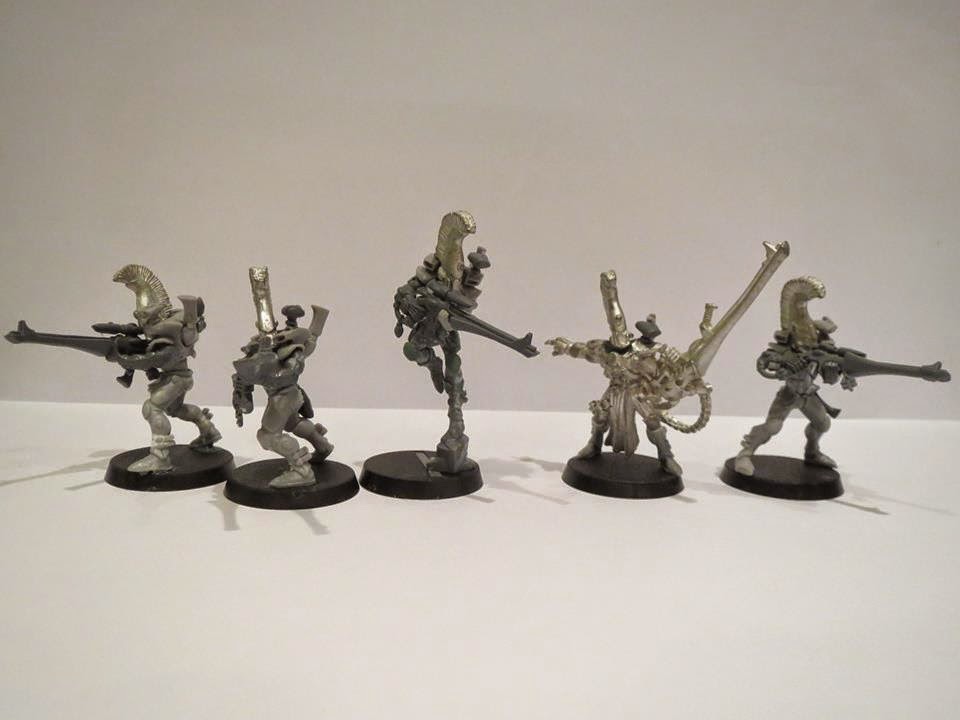 Anyway, he'd asked for my address recently and I'd thought it was something to do with a recent North West Kendo Competition that Manchester, Liverpool and the other local clubs had arranged/supported. But it turns out it was to deliver these Genestealers and it was a genuine gift, no doubt to help fuel my own hobby and the blog. Tom is struggling with his hobby mojo so I guess at the moment I'm doing what he can't and he's doing the kendo I no longer can. He mentioned starting a hobby blog, which no doubt would be cool but personally I'd rather see him do a Kendo blog. If I could still participate I would, whether that would mean I would not be doing this, or maybe just in a reduced capacity I don't know but Kendo is a way of life. As much as I love my hobby I'm aware that it's a passion, an obsession, an addiction, it may control me but it does not define me. 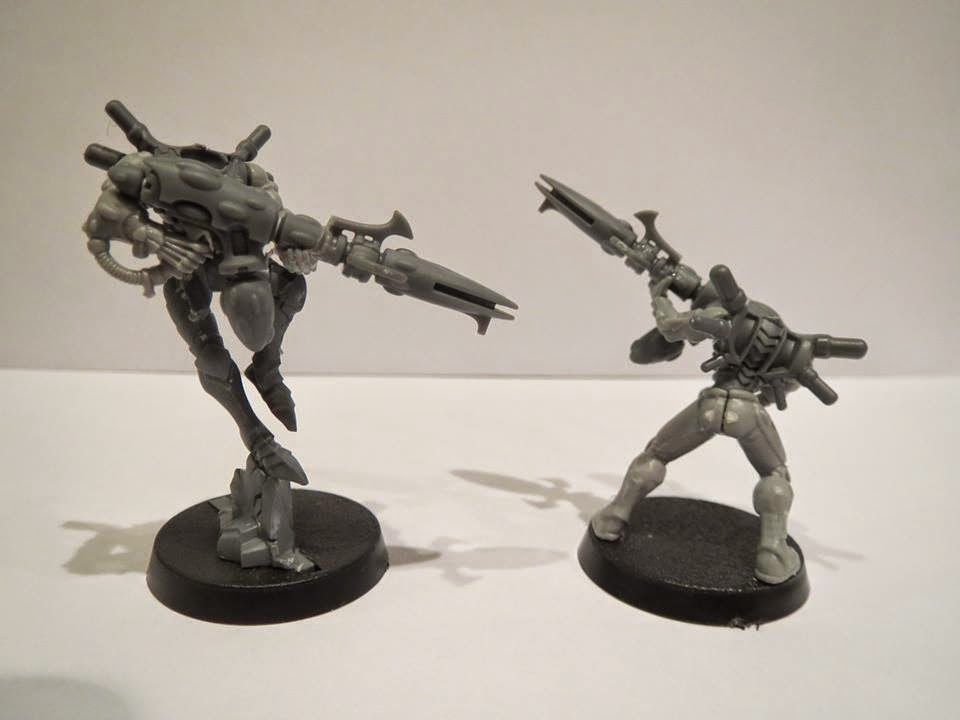 So this is a big thanks to Tom for the unexpected gift, I can now paint them without any guilt attached knowing they were for me all along and I'll look to try and add some of my spare Stealer bits so they're more interesting. So in a week where I felt marginalised by the excess of the new Space Hulk it is an act of generosity from a friend that reminds me of the spirit of the community, the meeting people and sharing experiences that are the core of what we do. So I will admire the Space Hulk as it returns and hope that in 5 years time it will come back this again, but for now I'll stick to the 10 first generation Stealers that emerged from hibernation unexpectedly but most gratefully.