This is almost embarrassing, just a few days into my Hobby Season and I've completed something and already it's 'off list'. If I'm honest it was mainly done in 2013/14 season and in actual fact was completed 4 days before the new season rolled over but due to the unique way the blog is scheduled it'll get the 2014/15 stamp. 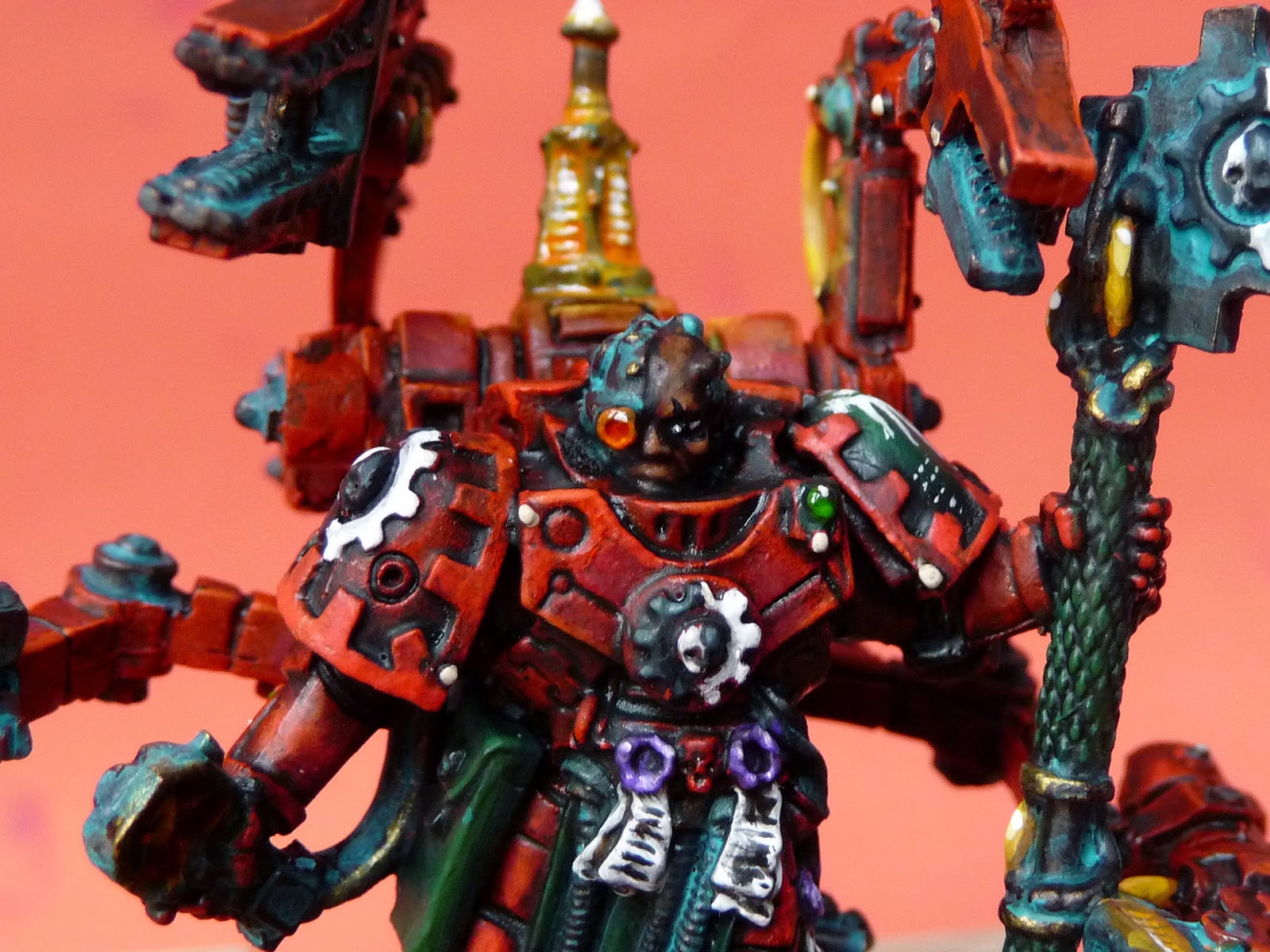 It's also a bit weird because this guy seems to have appeared from nowhere. He's only really been seen here. What's happened is that after a Red Oxide undercoat and assorted washes and Vermilion drybrushes his armour has pretty much painted itself. Whatever I did it just happened organically so there was little to indicate when I should take interim pics. 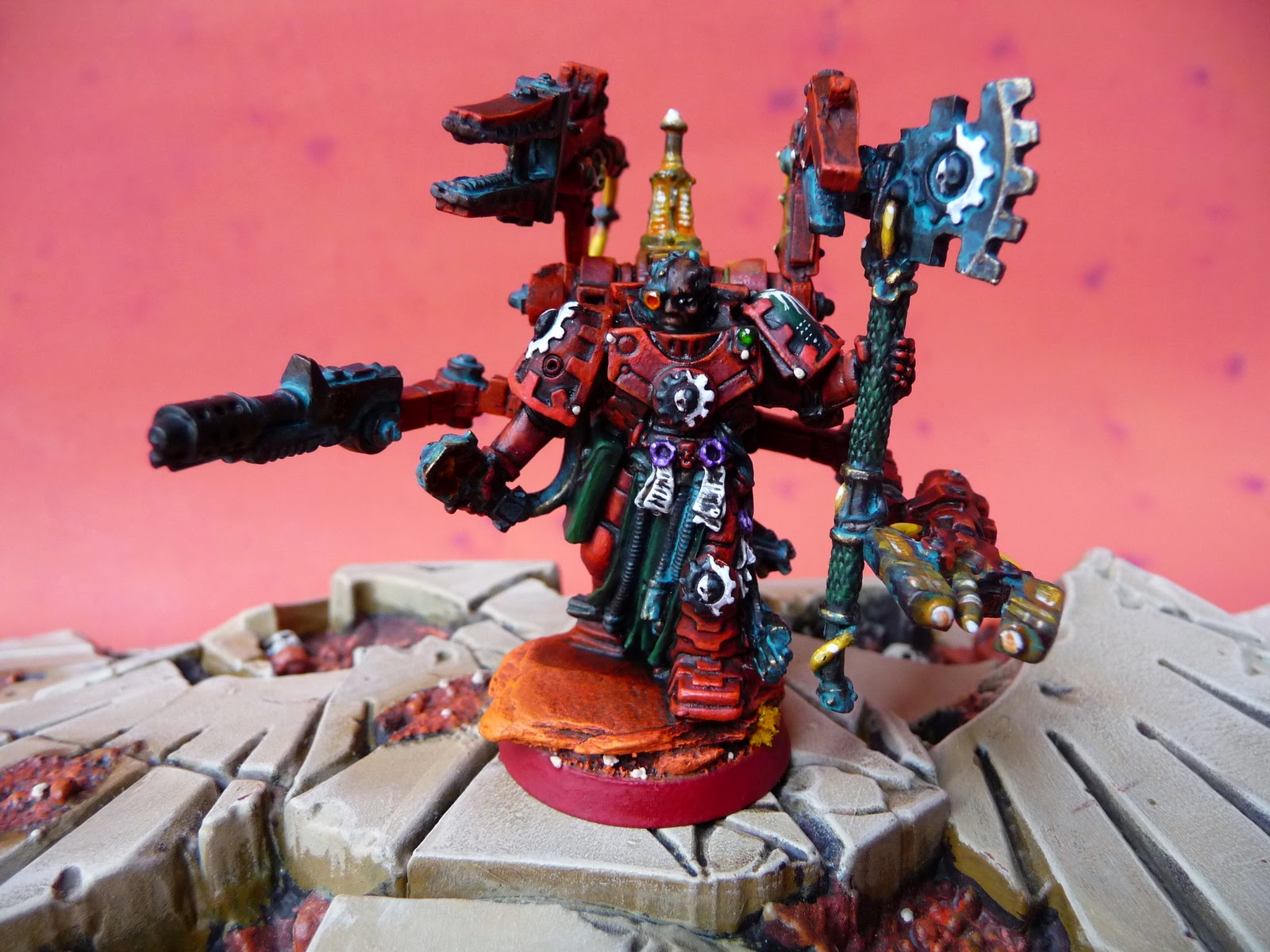 When I finished the Devastator squad I looked at the Dark Vengeance Tactical Squad and was slightly disheartened at the 10 marines that needed to be green and this red fella just called out to me. All I needed to do was get to a point where is backpack was ready to go on and I could tackle the metal elements. The build/paint order got messed up and I had to do a number of separate sets of bronzing and red armour but over the course of two or three days during the loft conversion he got complete. 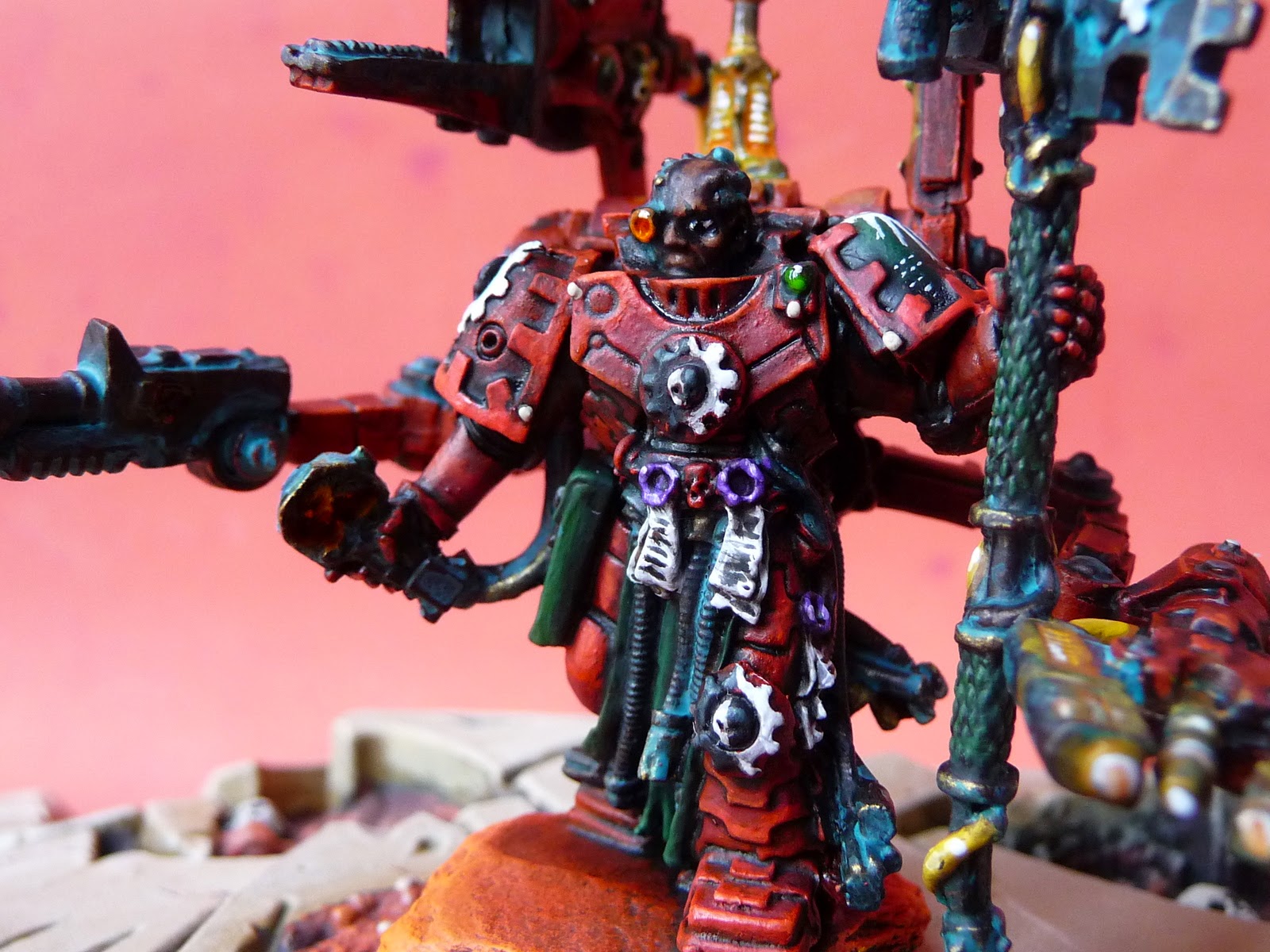 I did have a bit of a disaster near the end where I big blob of VerniDas gloss varnish went all over his face, instead of the tiny dot in his bionic eye! Must remember - use a cocktail stick in future. Thankfully a second coating of Anti-Shine solved that. 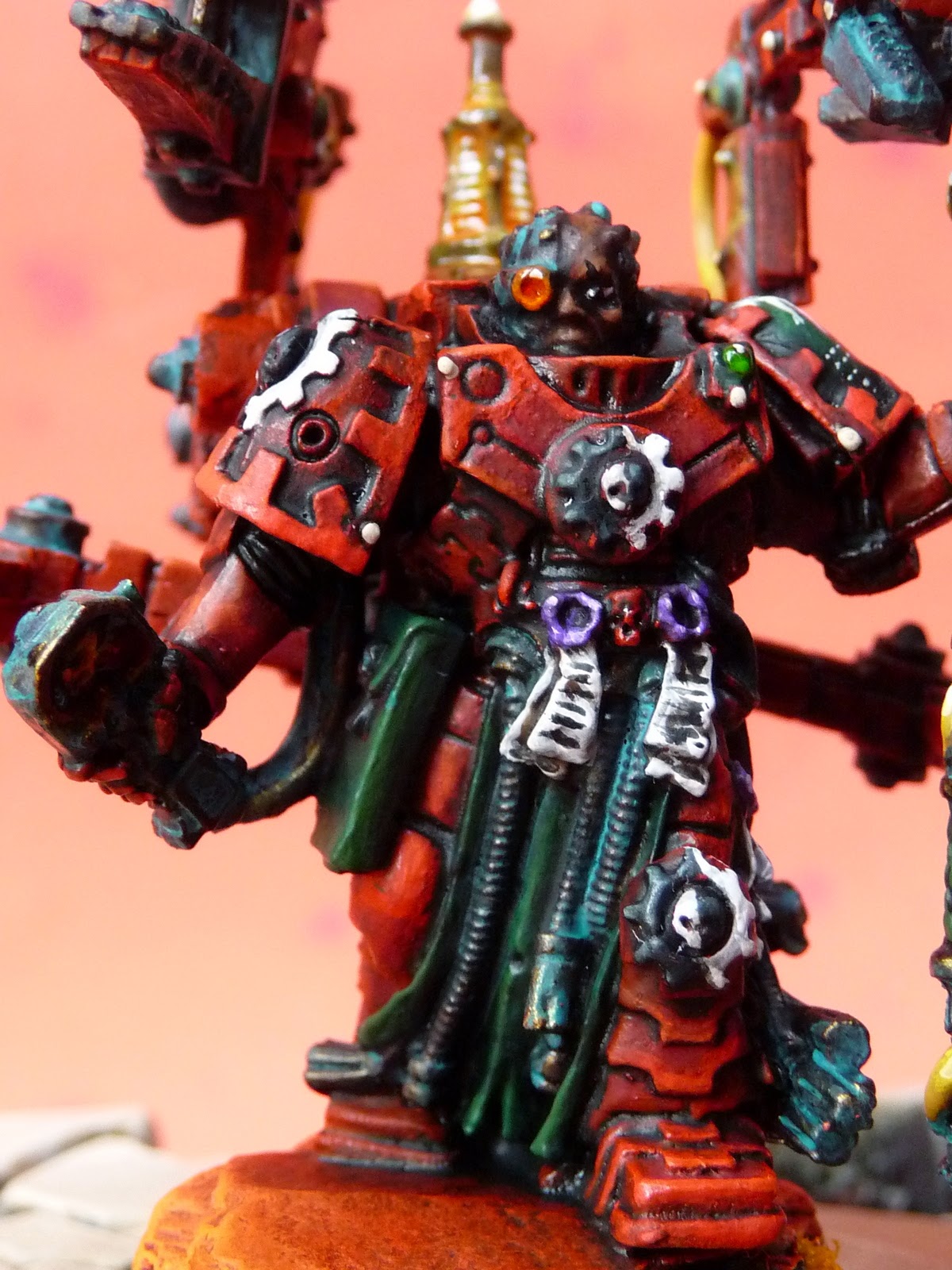 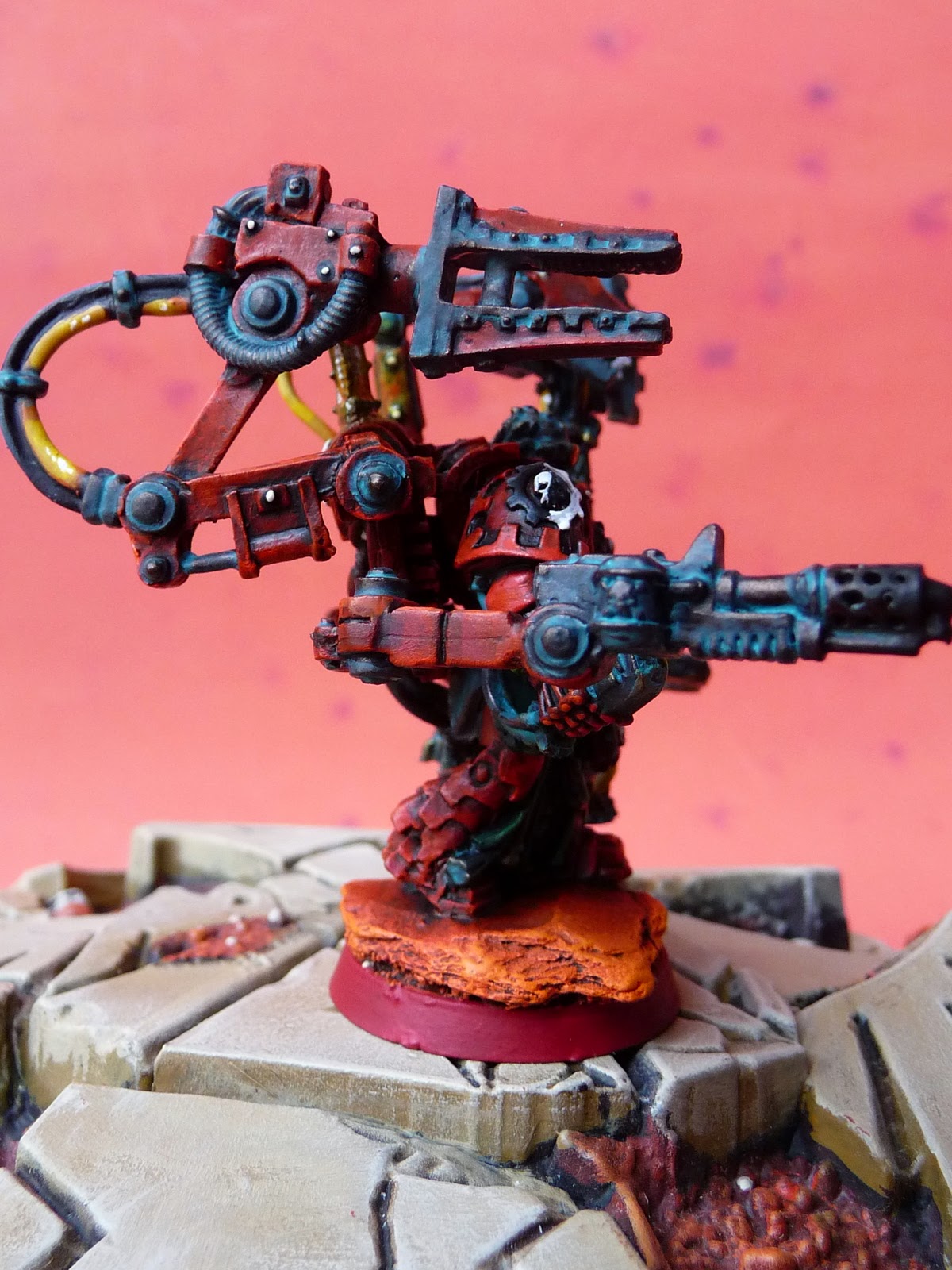 I'm a little concerned that the yellow pipes seem to have the same level of highlighting as the plasma glow from his backpack, or Power Field Generator as I'll probably run it. Also the Chapter symbol is a bit wonky, or perhaps it's a bit 'tribal' the wings are rustic at the least and that sword blade is more like a kipper tie but I like it. He has few litanies, just the dots on his Dark Angel shoulder pad and these are meant to be written out as 'binary cant' - his Astartes oaths written in the language of the Ad-Mech. 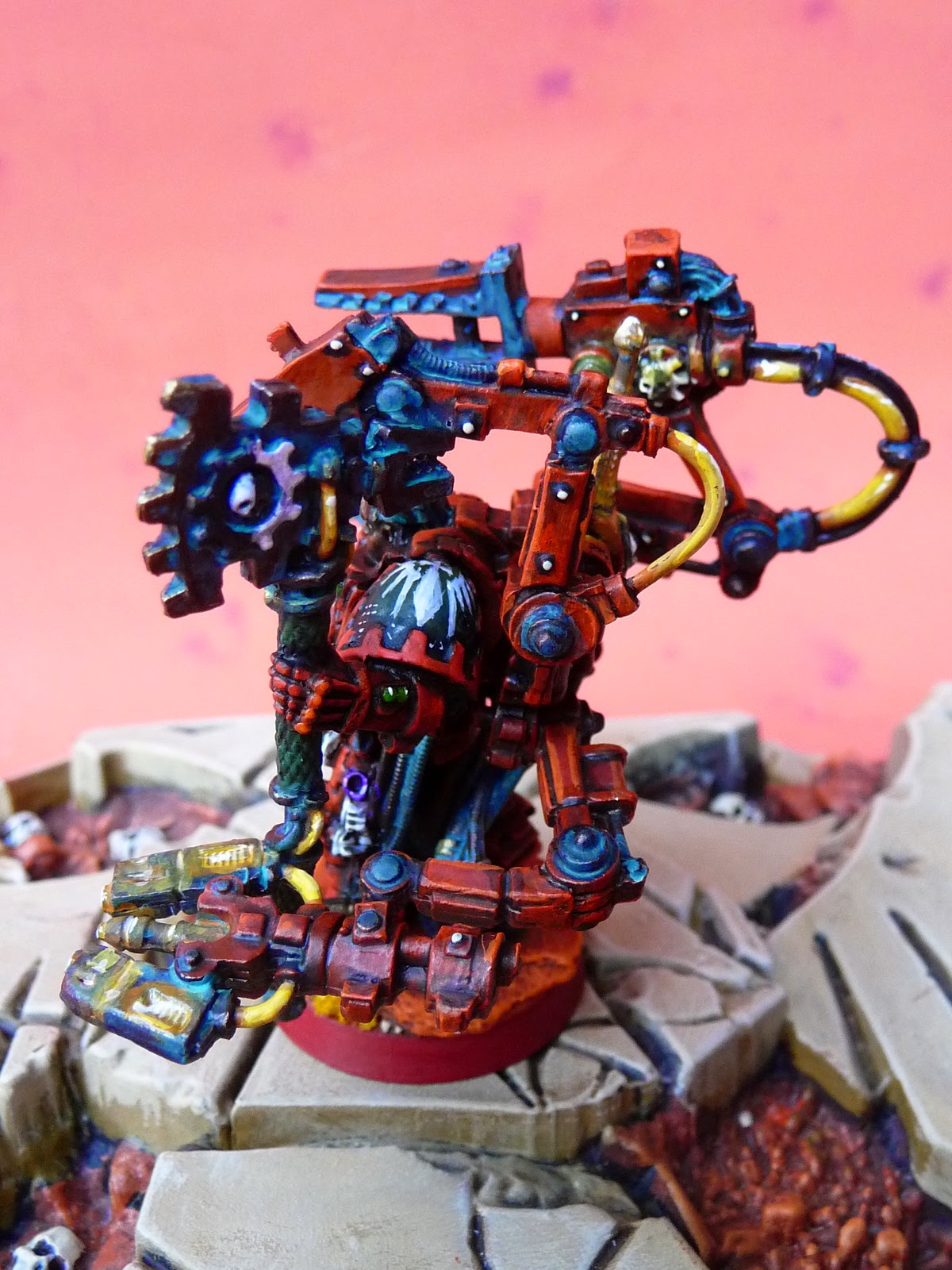 I didn't want any other markings as he's already a bit busy. I added more Bronze/Verdigris in the joints because when it was all red it was a bit dull but it certainly 'punctuates' the red... a lot! 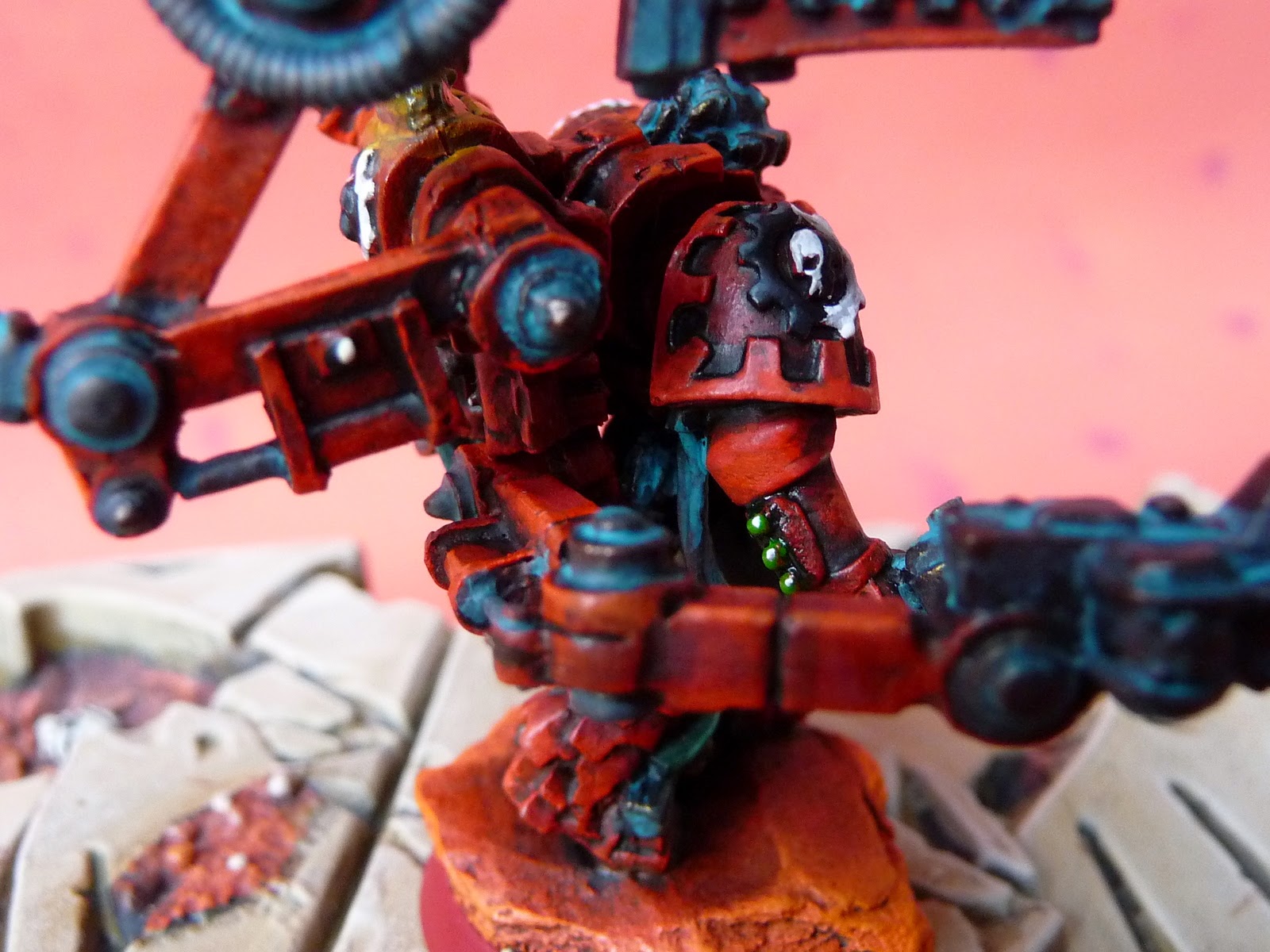 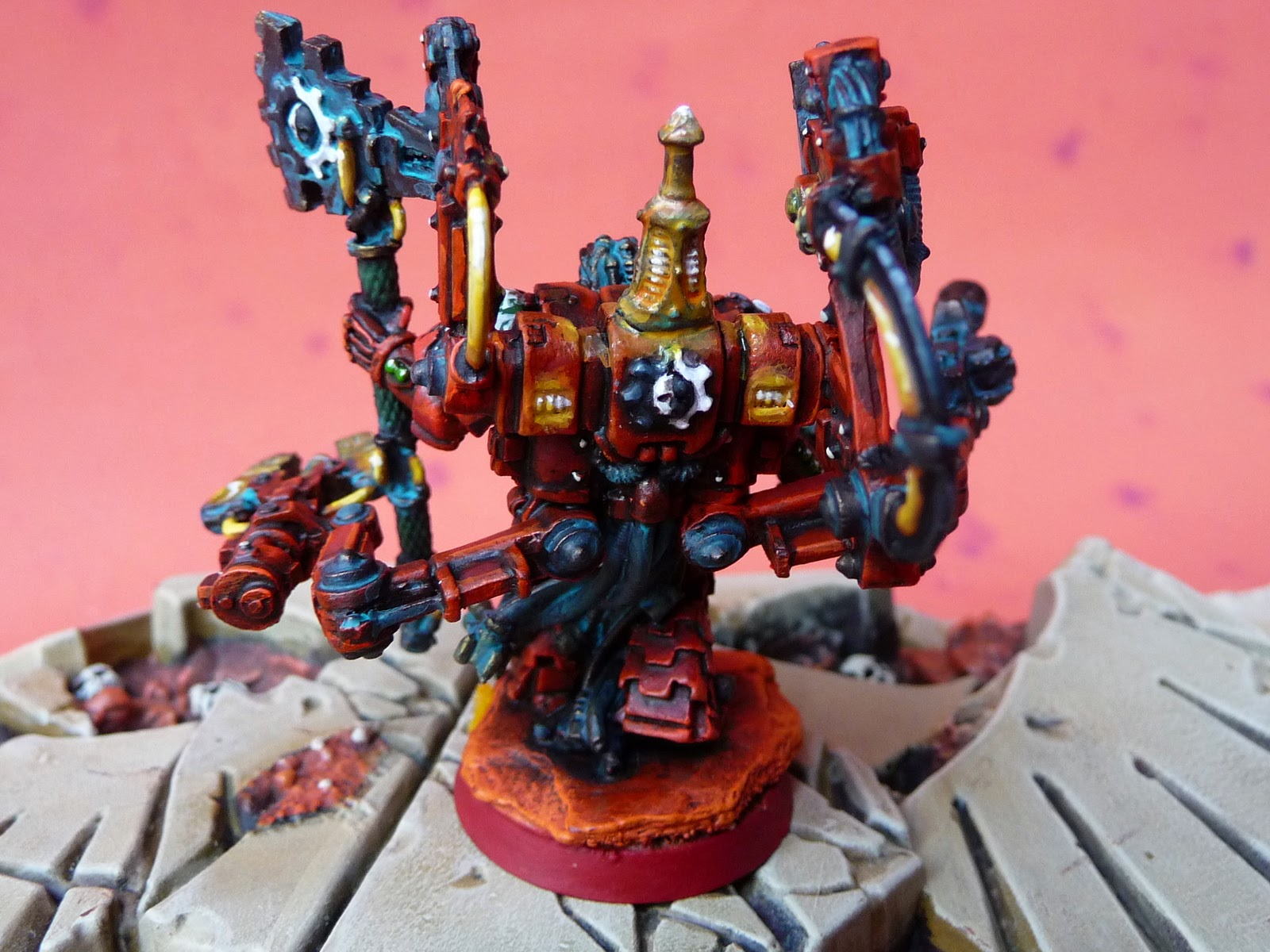 Even trying to cast the OSL onto the servo arms, it's a bit hit and miss but overall I'm really chuffed. This is an awesome model and relatively cheap for what he brings. Even if you don't take the Servo Harness this model rocks. 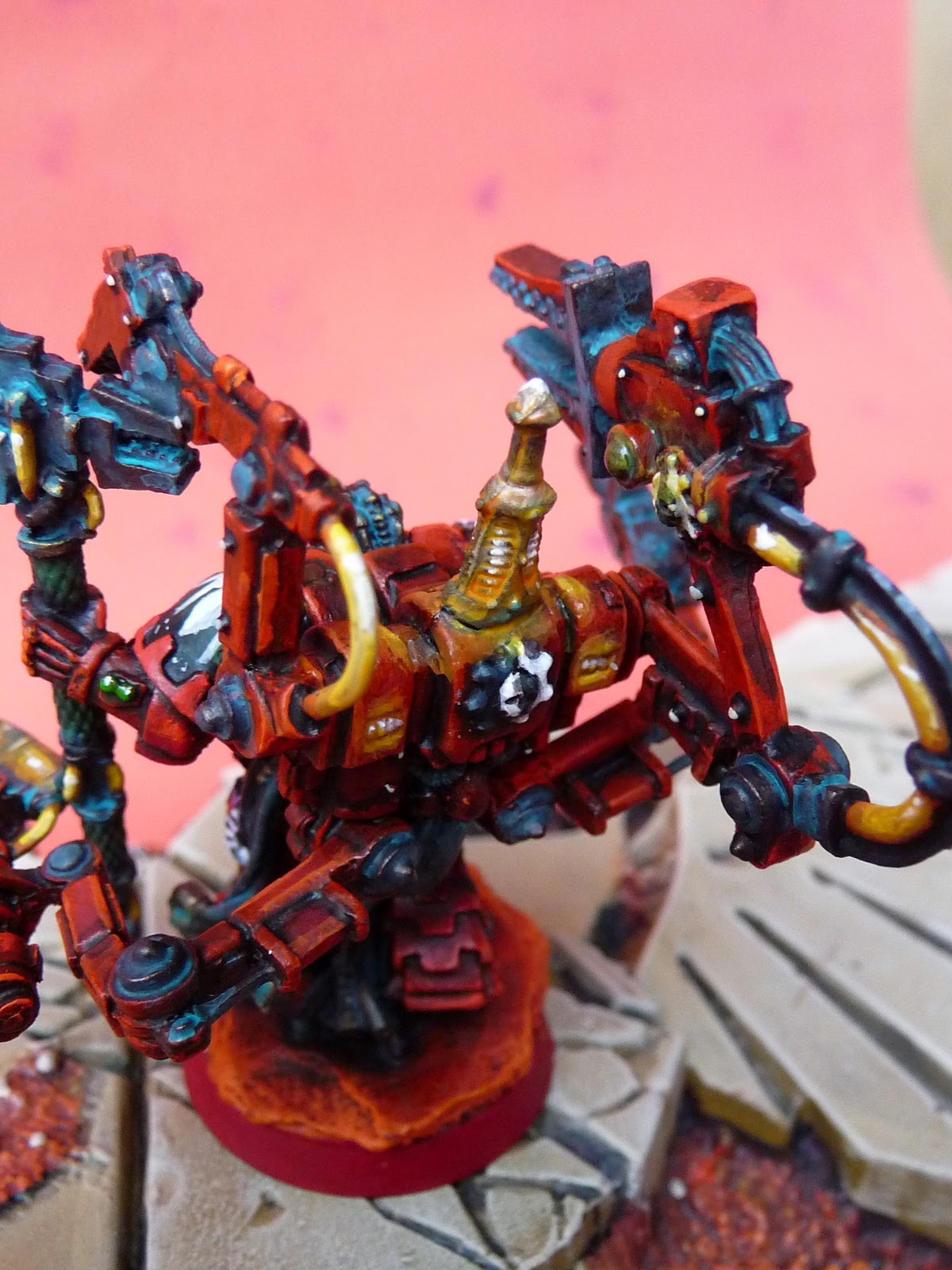 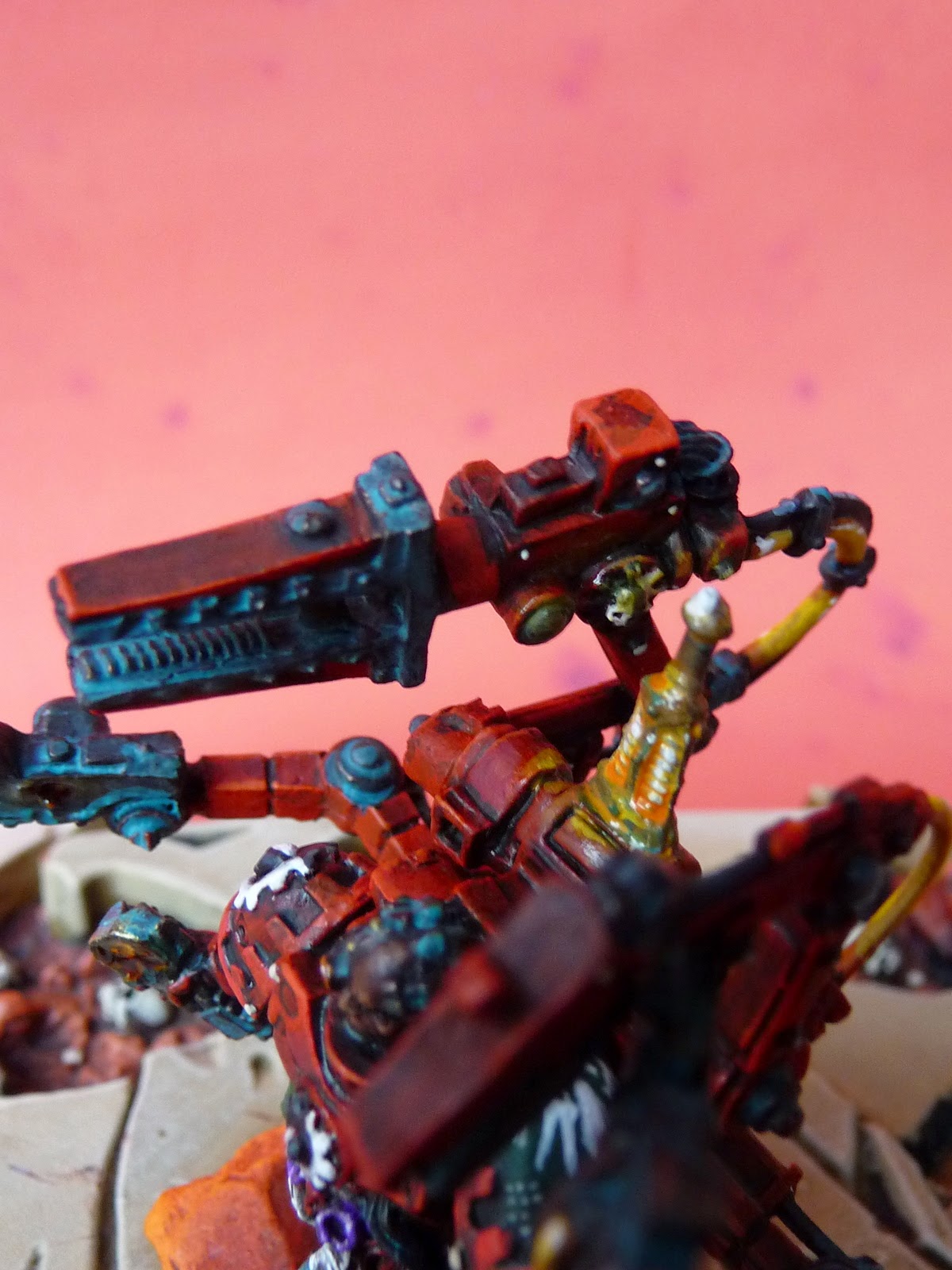 I did have a Rogue Trader Techmarine that my mate Liam gave me a Zinge Industries Robotic Servo Arm for. I was super keen to get on with the conversion until the 'no 3rd party parts' rule came up for Warhammer World, which prompted this purchase. 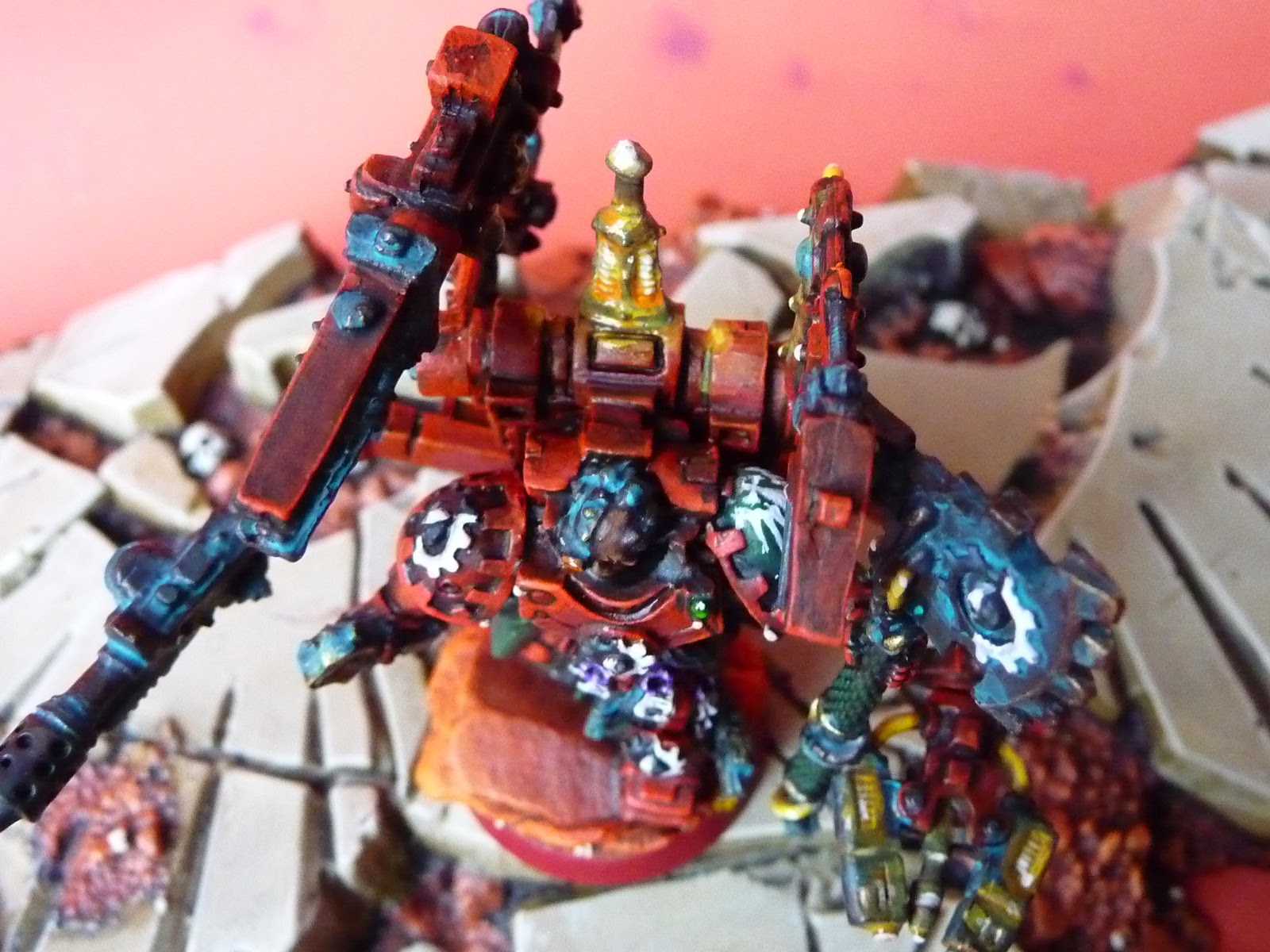 I'll still go ahead with my old guy at some point, but until then this will fulfil my Techmarine needs. Hopefully I'll share that with you, the Techmarine needs to be stripped as its currently metallic green! Just of note is the Auspex on this guy, it turned out a bit pants, but at least some Tamiya Clear Orange X-26 and coating of Vernidas helped salvage it, as with all the other lenses. 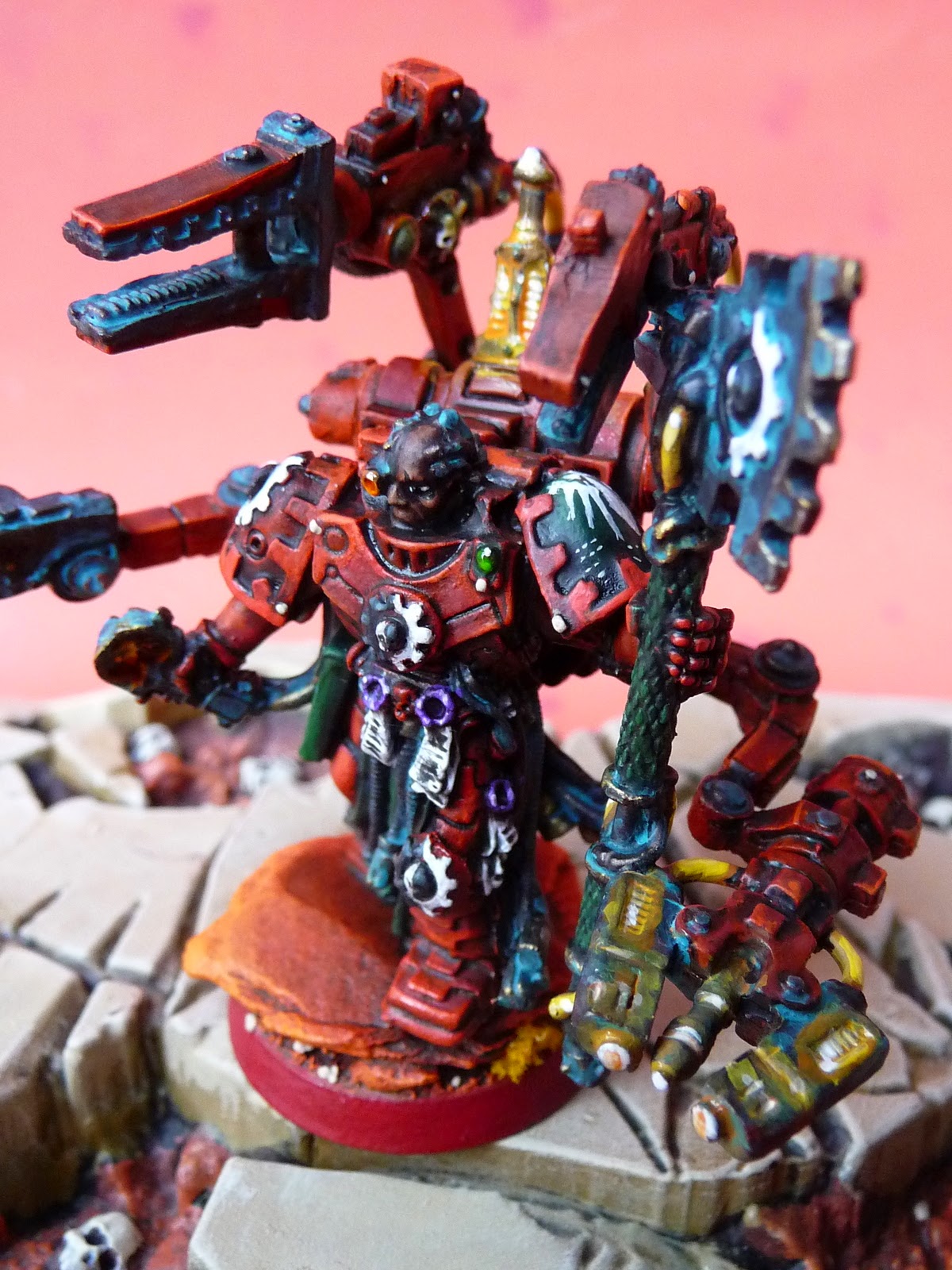 If I'm honest I wish I'd got the one with the helmet as it's bad a$$ but we make do with what we've got. 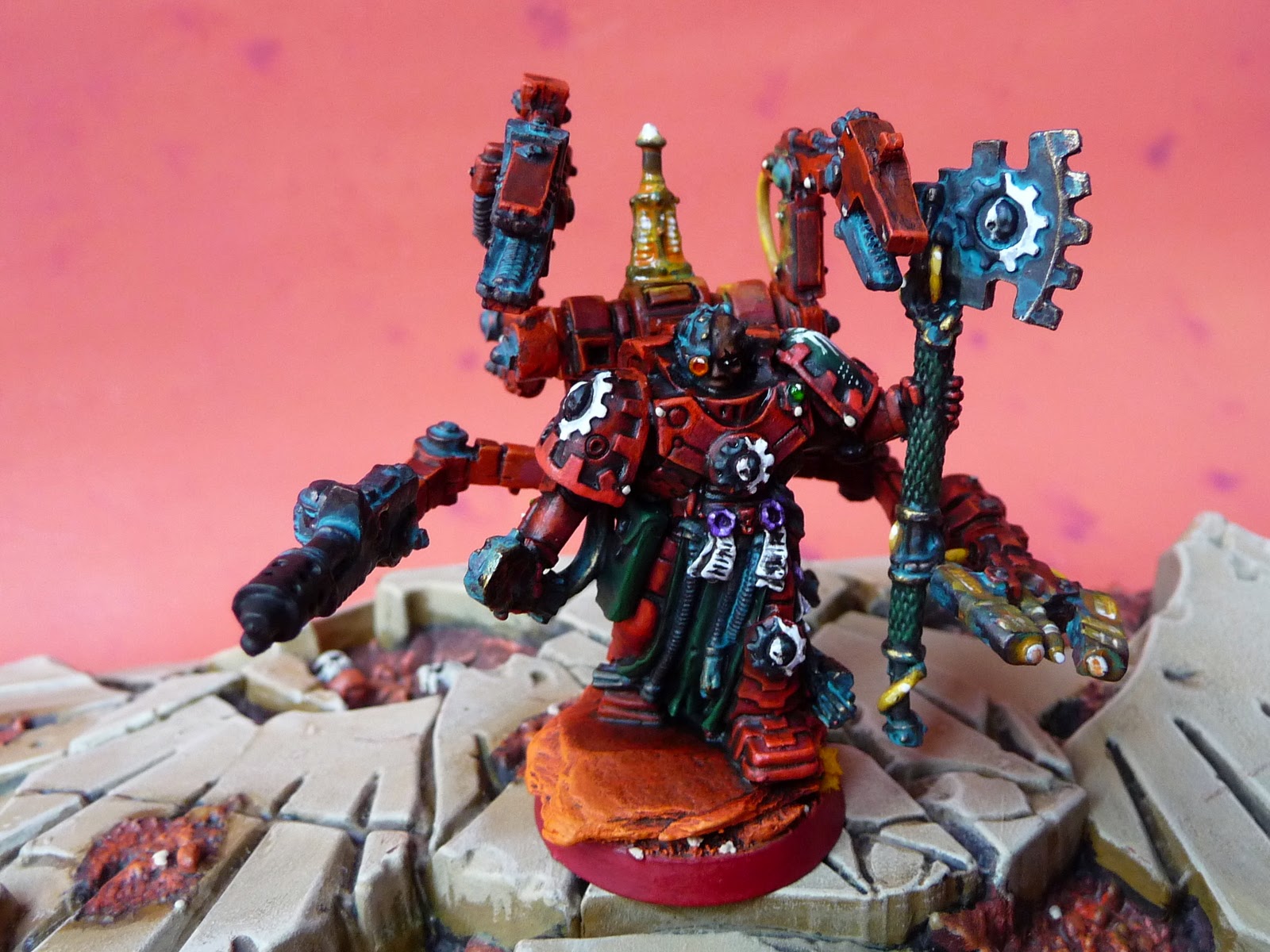 And thus I get the first deserved/undeserved [you choose] off list red stamp of approval for 2014/15. Fact is I'll be completing a lot started in the previous season so, as Dr Sheldon Cooper B.S., M.S., M.A., Ph.D., Sc.D. once said "Cathedra mea, regulae meae. That's Latin for 'my chair, my rules'". Hope you enjoyed the pics at least :) another 70 to 100pts at least for the Dark Angels.