Nearly six weeks since my last confession... and how've I been doing? I've obviously been flitting between the Great Maw and the Skyshield walls in preparation for Throne of Skulls, preview to follow. This has actually been quite a challenge, it's required a lot of will power and discipline, not to mention a lack of sleep, to complete. This is what I was dealing with last time: 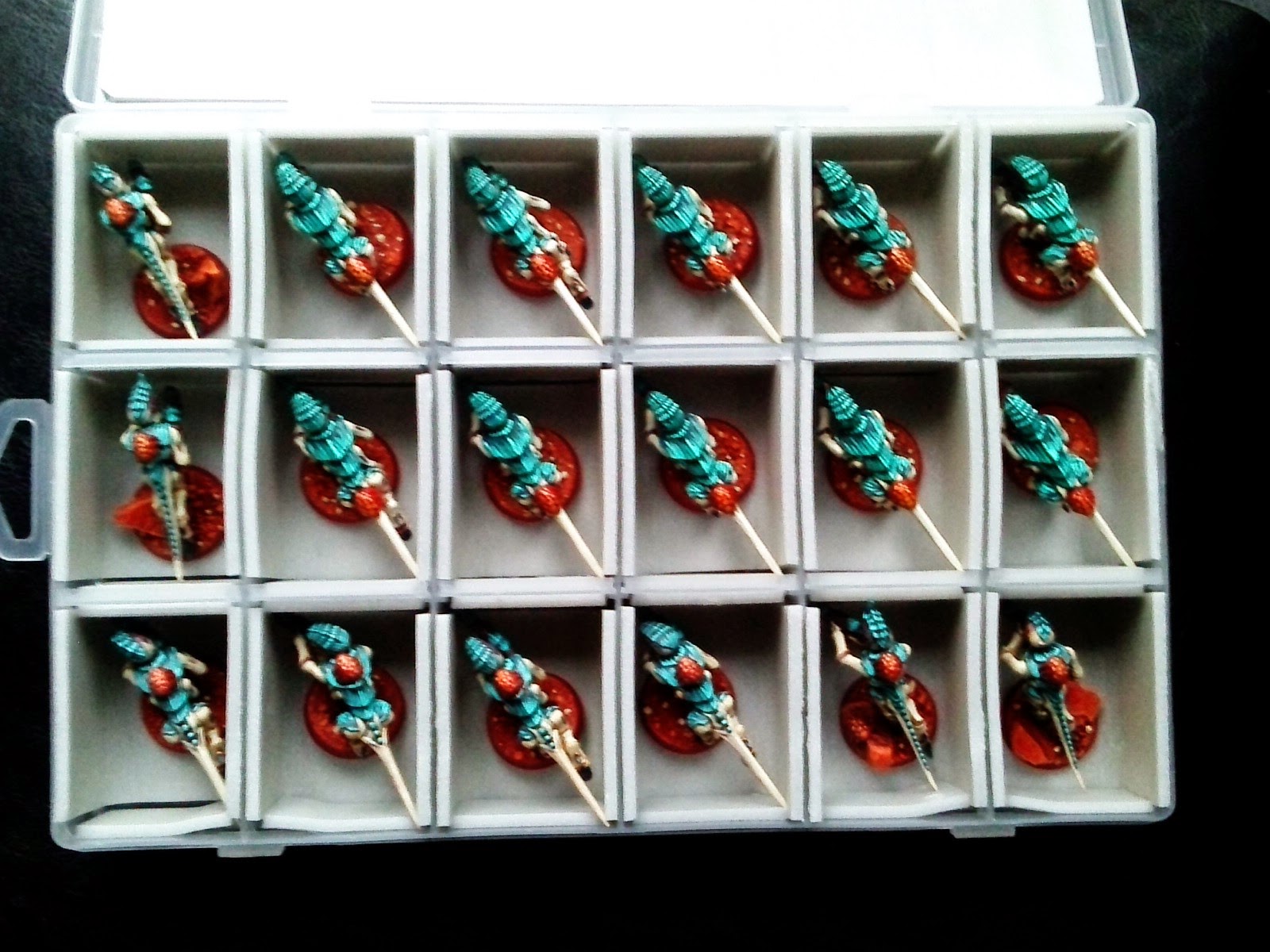 And I also made 2 new figure boxes: 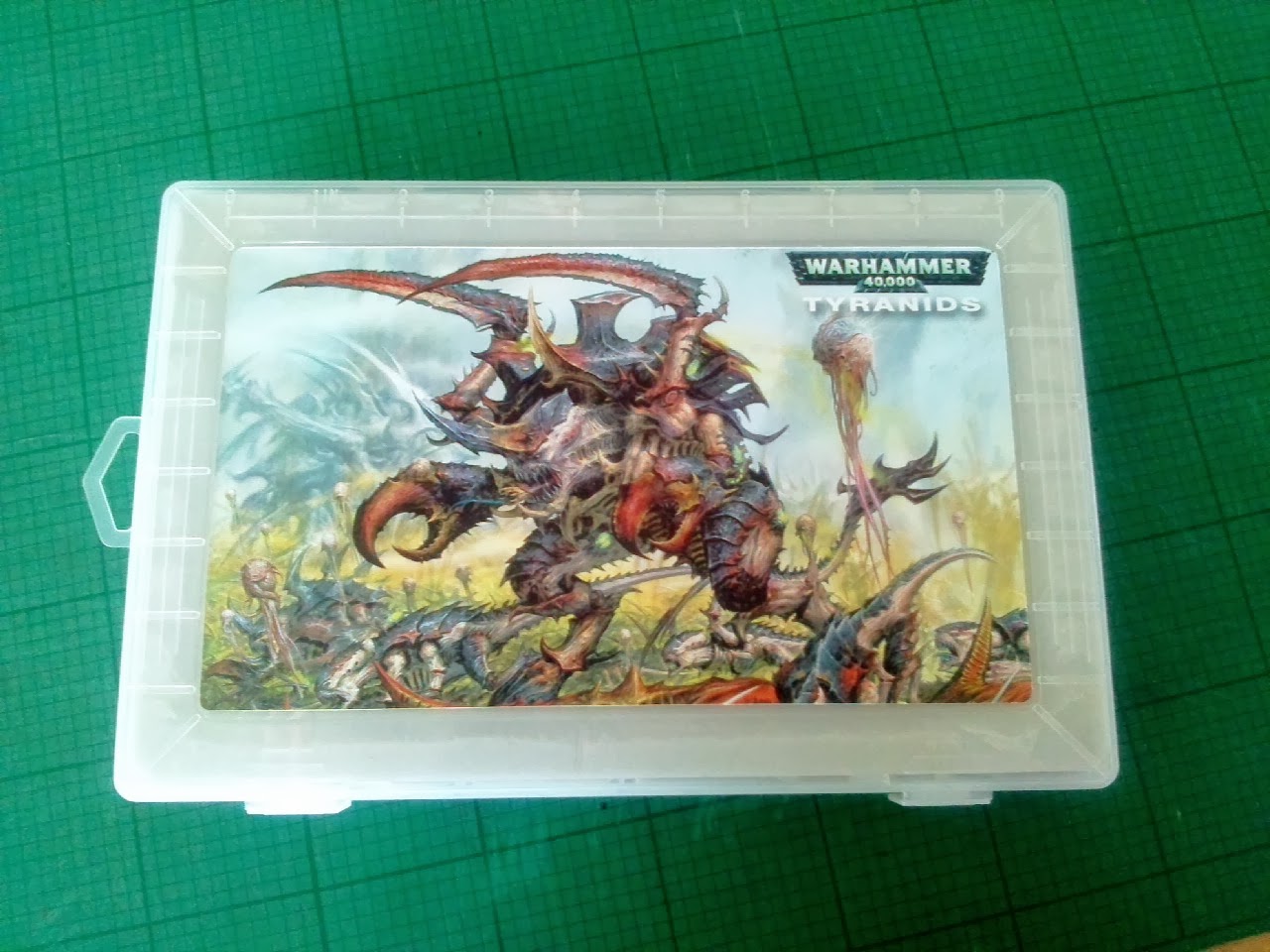 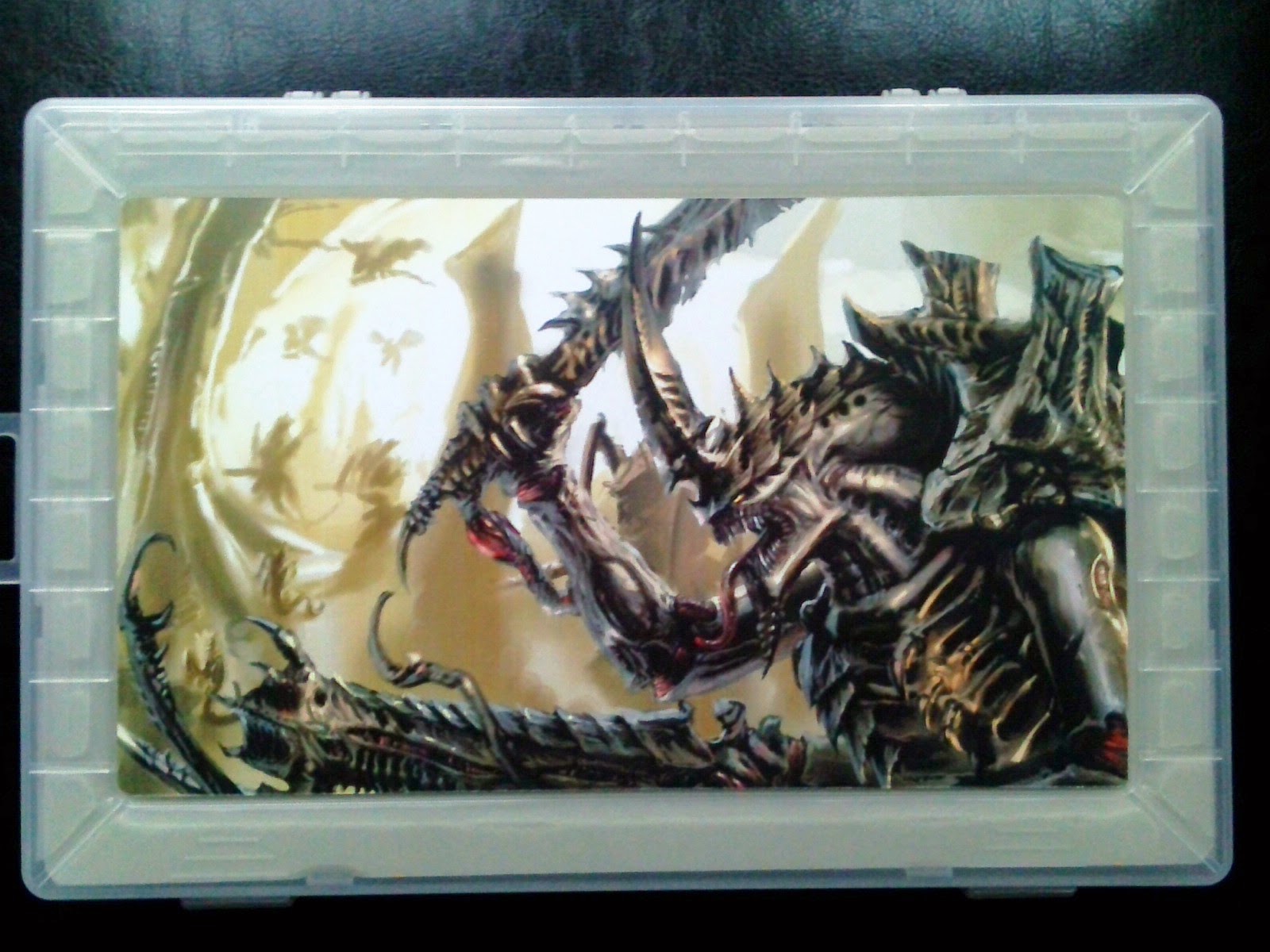 However, as the deadline and completion approaches I can feel the reserves of energy waning, the job will be done but what of post-Thrones? Traditionally I have found myself completely stuffed on hobby gluttony after previous visits to Warhammer World, and with a solid six months of modelling and painting I may well take some 'time off'. That wasn't the plan, I wanted to get three months of Dark Angels work in before Project X is required to begin, but I feel quite tired right now so we'll just have to see what comes.

I have promised to repaint my brothers vivarium, after the only solution we could find to the matt floor varnish 'frosting' was to start again, So it's now a flat brown, so I need to do a shadow wash and then drybrush it. A couple of nights work but one that has been postponed since about Christmas, the poor lizard needs a new home. 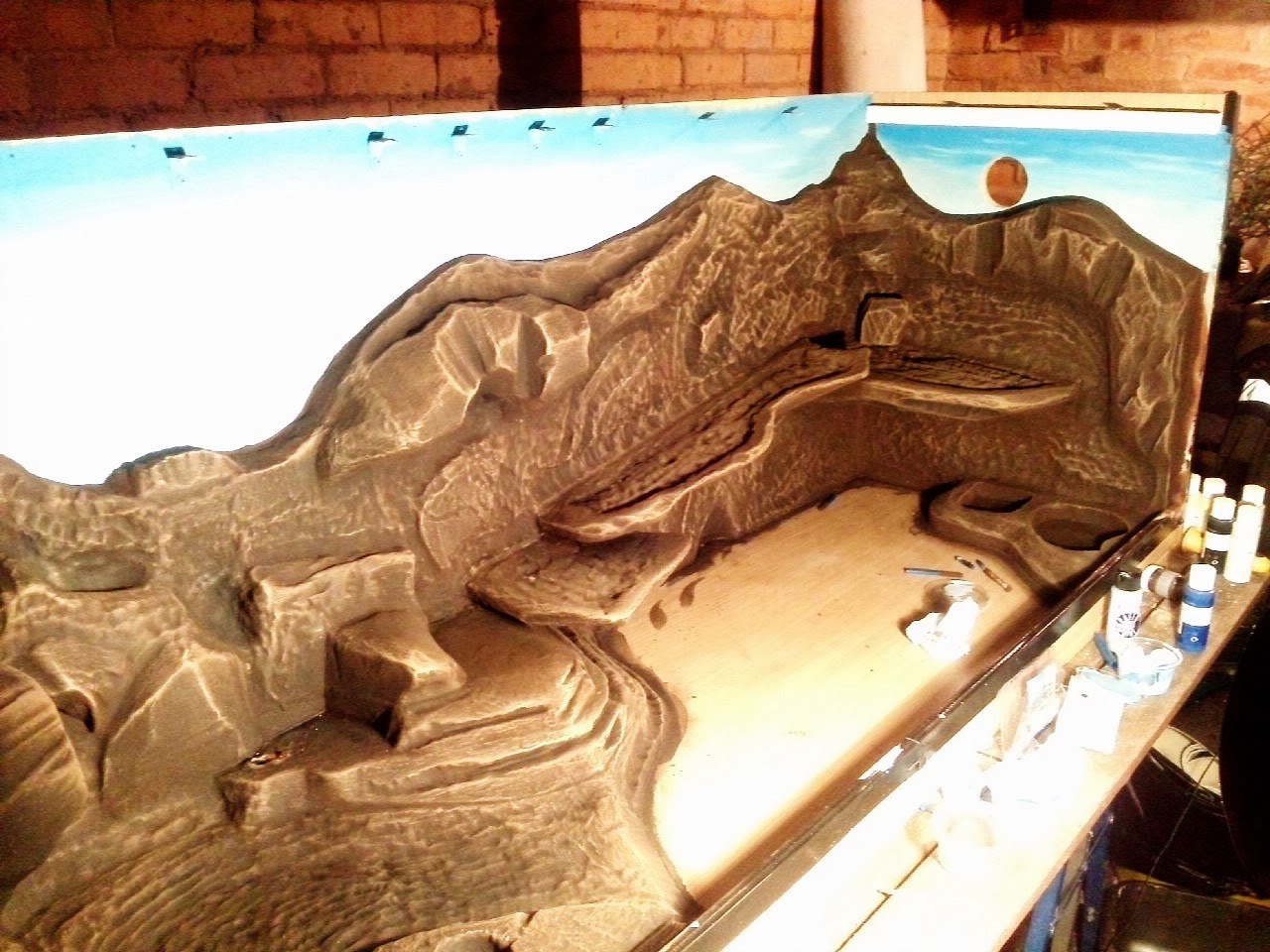 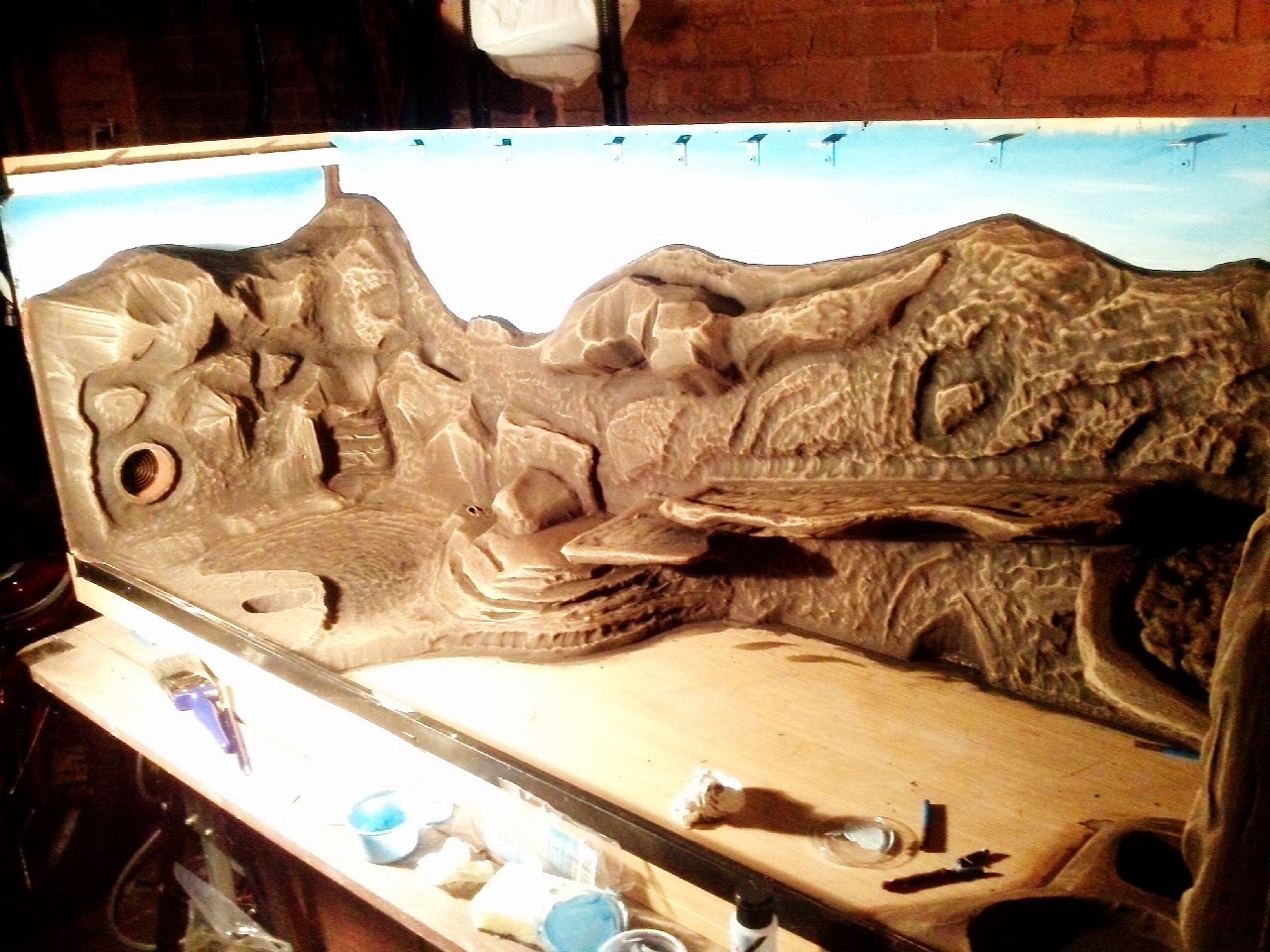 I'd also planned a couple of 'large' purchases some 'Apocalyptic' things but having just come off the Skyshield I'm not actually keen to start a big model, although Project X will be big, but potentially straightforward. In case you're guessing it is not a Tyranid Fortress of Redemption. I had thought of doing one and I had a brilliant idea for the tower and some of the other bits but I came across the following picture a good few months ago that's pretty much what I had in mind

Nabbicus pretty much read my mind [and he even likes my Quad Gun], although I was going to add some kind of 'oesophagus' using rope between the Capillary Towers with Termagants attached to it and coat the entire thing in PVA tissue paper so it looks like the gaunts are running up and down the tower 'gullet'. I wonder if he got round to making it? I measured up the Fortress to plan ahead but project X will take up a fair bit of room [I don't have ] so it will go on the back burner.

Meanwhile I do have a new Zoanthrope and a Venomthrope as well as a Carnifex and Pyrovore to paint but I don't want to start those, despite the 'voices' telling me they'll be SOOOO easy. I want to do the Dark Angels and if I'm going to struggle to get motivated and also try and endeavour to be sensible with my hobby time - not working till stupid o'clock I think they deserve a bit of attention.

I actually felt nauseous the other day at the thought of doing something new. However I managed to overcome that last night when I thought I'd prep the Zoie and Venom [that's when I lost the back vent for the zoie, grrr!] and get some bases done too - 6 bike bases and 11 Genestealers [wait, what?! Where did they come from, ha, ha!]. I know I shouldn't but until Thrones happens I still feel I'm allowed to do some nid stuff and may well throw in some nids while I'm focussing on Dark Angels, just to keep momentum going. So  I basically prepared a simple list that I can hopefully achieve for the Dark Angels that utilises as much of the stuff I've already got started so I can have something complete to play with sooner...

I've my Aegis Defence Line to do, a unit of Deathwing, the MKI Land Raider, my Dreadnought [it's on the list too!] and I want to get some Ravenwing complete. I recently saw this Black Legion Army painted by Ballistic Skill Four which is what I would love to achieve on my Ravenwing 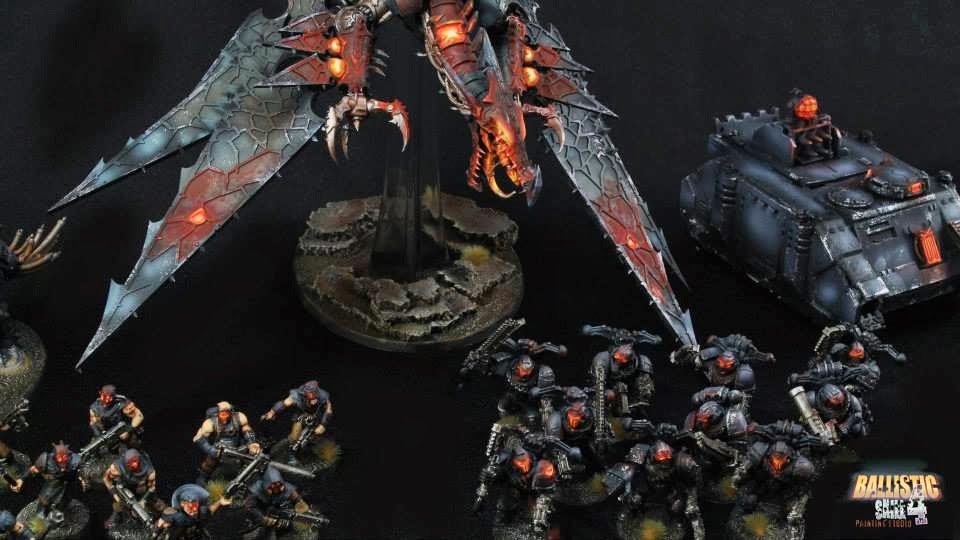 Which is reminiscent of the Codex entry that manages to eschew the 'white wings' of the Ravenwing who are supposed to be dark and shrouded hunters, not blinged up followers of Liberace

Anyway, that's it for now, lets get Thrones out of the way, overcome the post thrones slump and we'll see what treats the hobby has in store for me and the faithful.