Ben and I wanted to have a run out with our potential ToS lists. He's got his Void Shield Generator made now and was trying out his Stompa, which he has doubts over. I on the other hand am all about surviving the attack of a Lord of War, so it's Skyshield, Bastion, Aegis, however since the Bastion can be targetted without being occupied in Stronghold Assault rules I wasn't holding out for much protection on that.


The low down:
I deployed in as much cover as I could and split my Termagants on the Skyshield so half got invul and 3+ Cover saves and the rest just the covers. 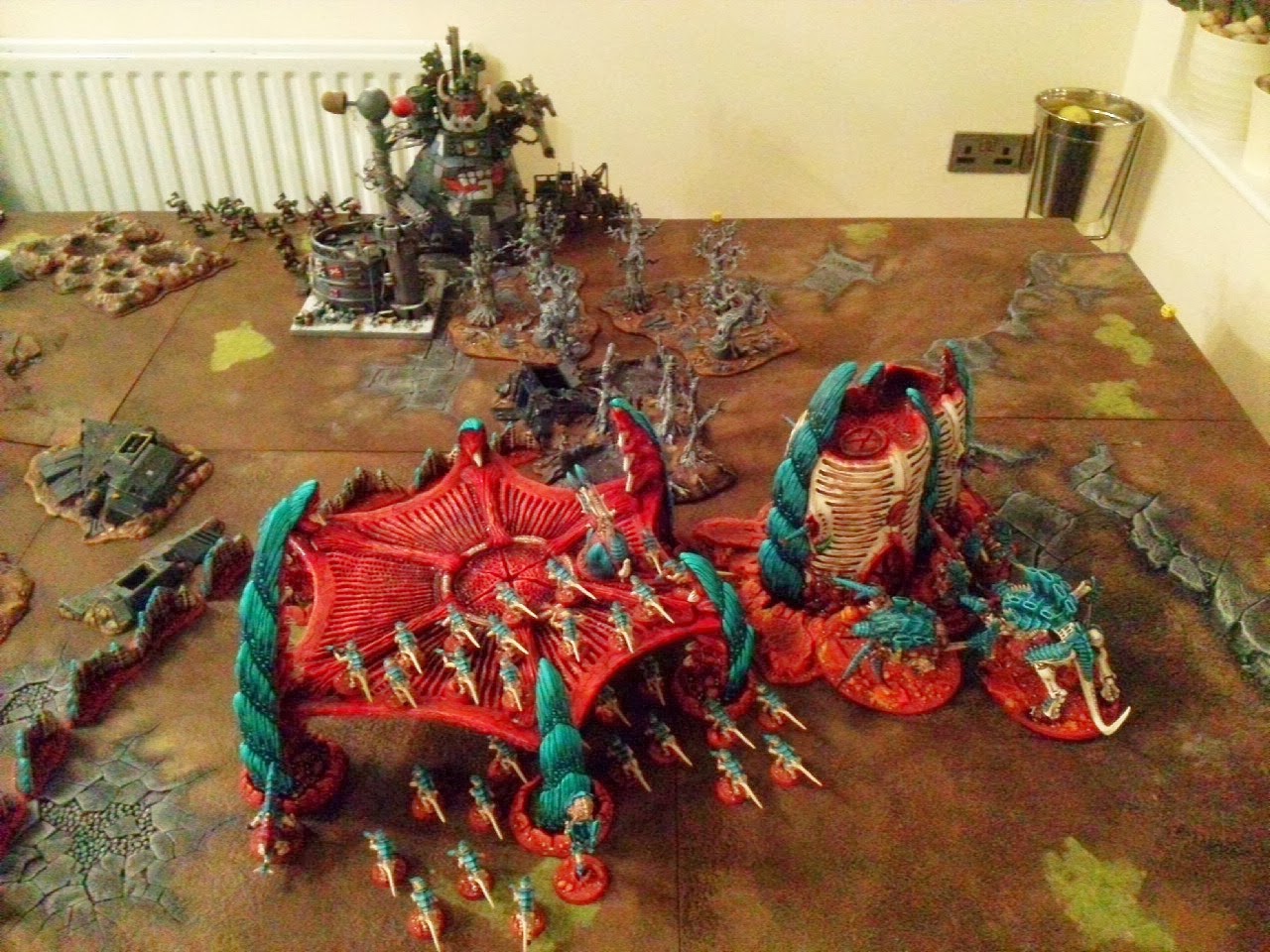 I set up hoping the woods and defence line would slow down the Stompa so it's D assault weapon would take a while to come into play. 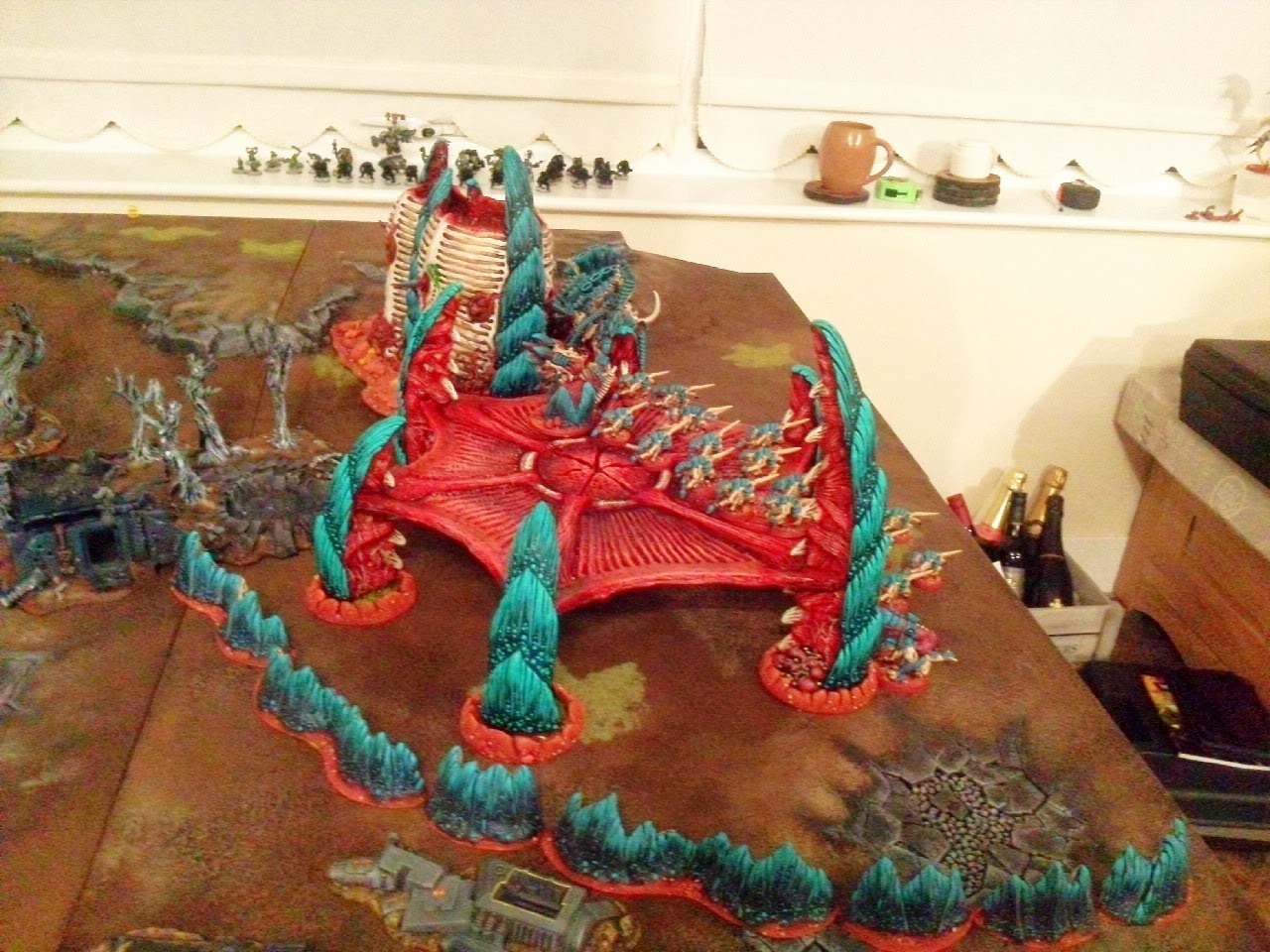 Ben's VSG has Battlements on top, I pointed out some may argue he can't access them as the VSG is described as an 'Impassable' building but in actual fact I think he's right, there are ladders on the outside so the battlements are indeed reachable, it's just the interior of the building he can't hide in. In fact the rooftop is a water tank that's frozen and there are some precariously placed planks covering the icy water that I found quite amusing and very 'orky'. 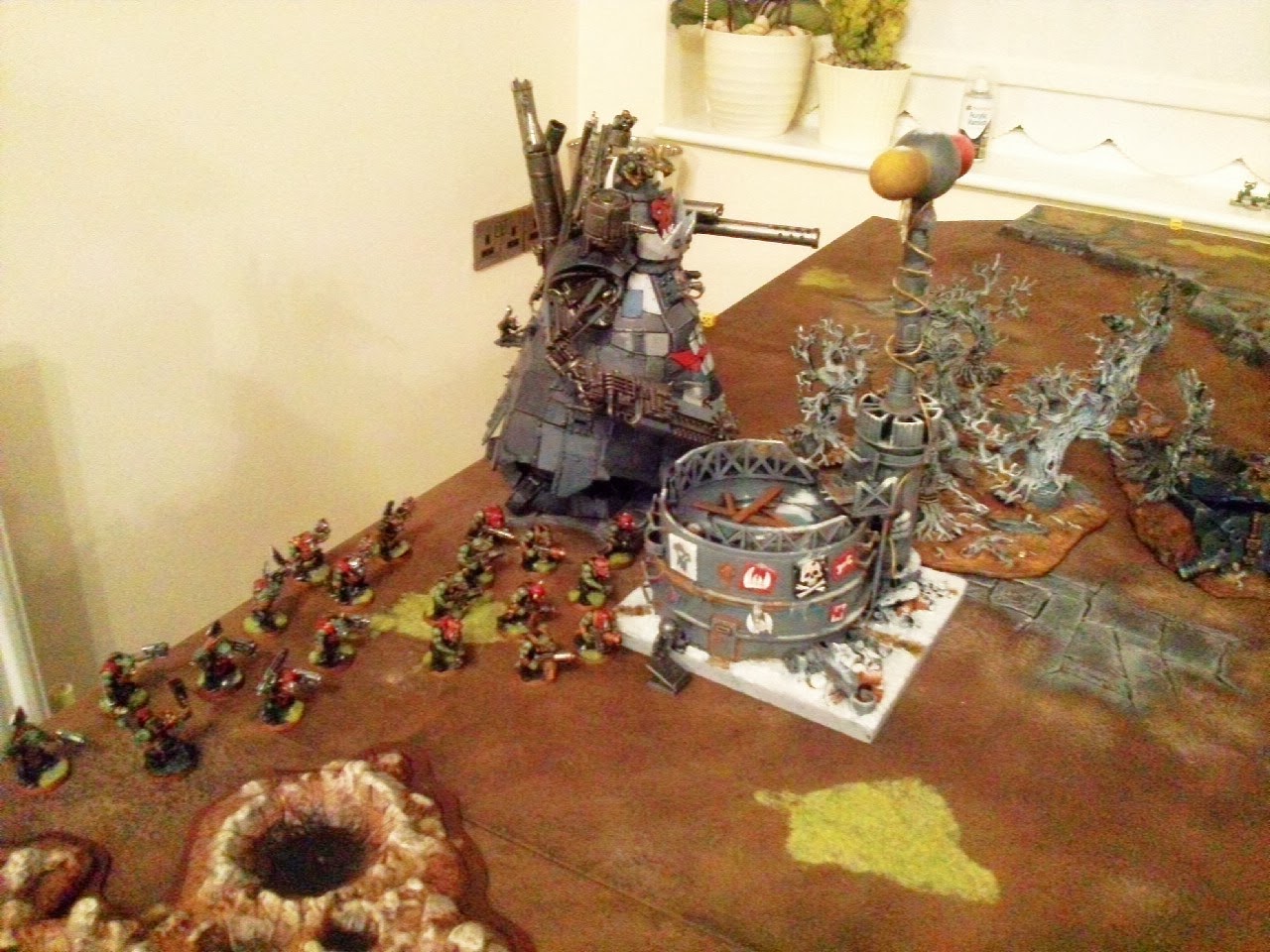 First turn and the Stompa bashes through the trees. There's no explanation of how to do a 12" Move Through Cover that we could find so we do two 3D6 rolls picking the highest from both to get his 12" aggregate. I think he managed 9" while the Trukk with Ghazgkhull and his Nob retinue burned forwards. The Quad Gun once again fell victim in turn 1, Stronghold rules state you get VP's for lost Fortifications only if you agree with you opponent beforehand. I thought you got them regardless, but awarded First Blood anyway for the loss of my unlucky gun. I think a couple of gaunts died too and a wound apiece on the Tervigon's but most everything else escaped [according to my plan]. 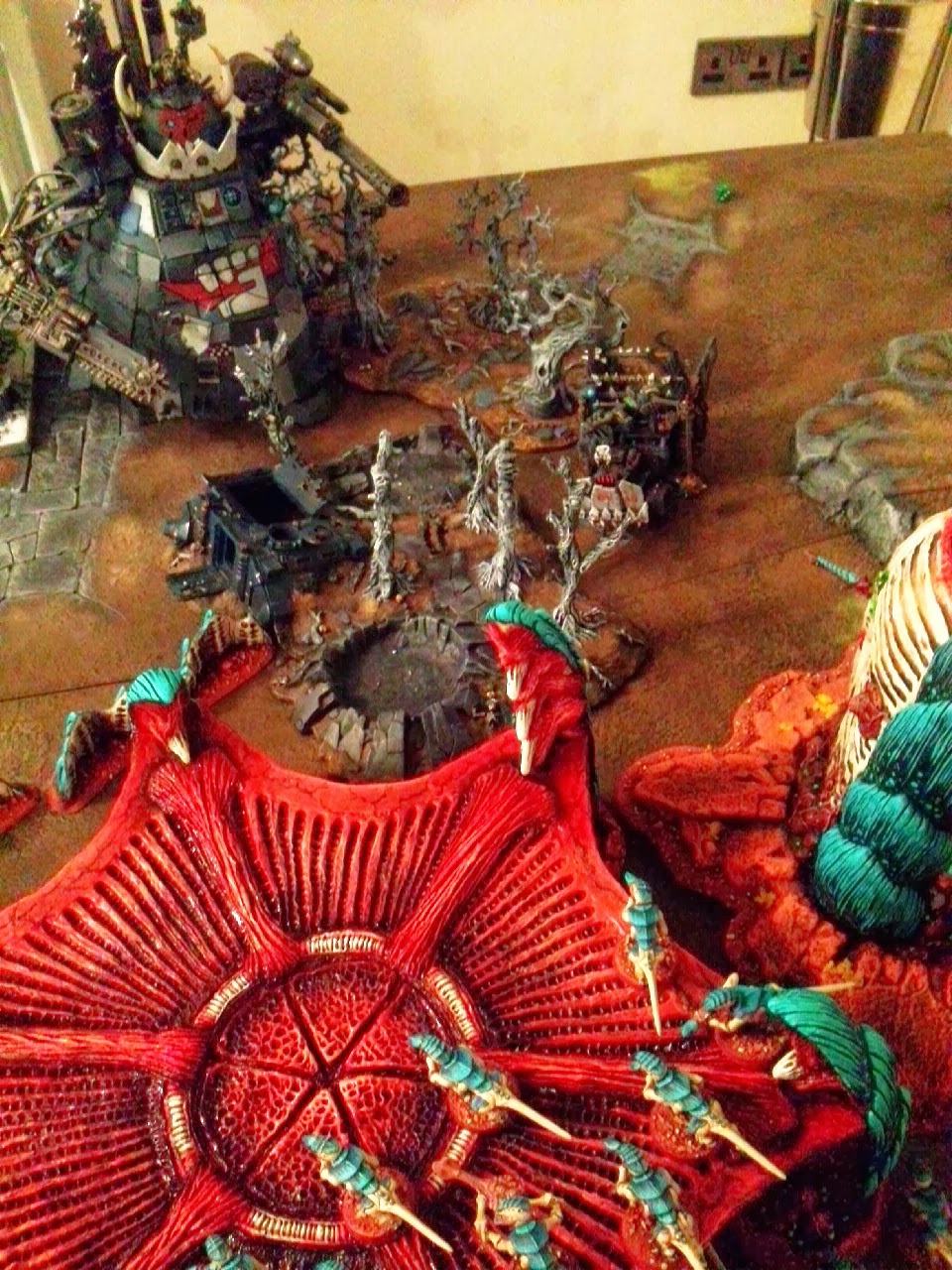 In my turn I threw as many Fleshborer shots as I could at the Trukk without avail and was forced to stop it with the Hive Guard, who were really my only chance at the Stompa. They did their job, blowing the Trukk up but it careened nearer to my frontline instead of what I hoped for and backwards into the Stompa. 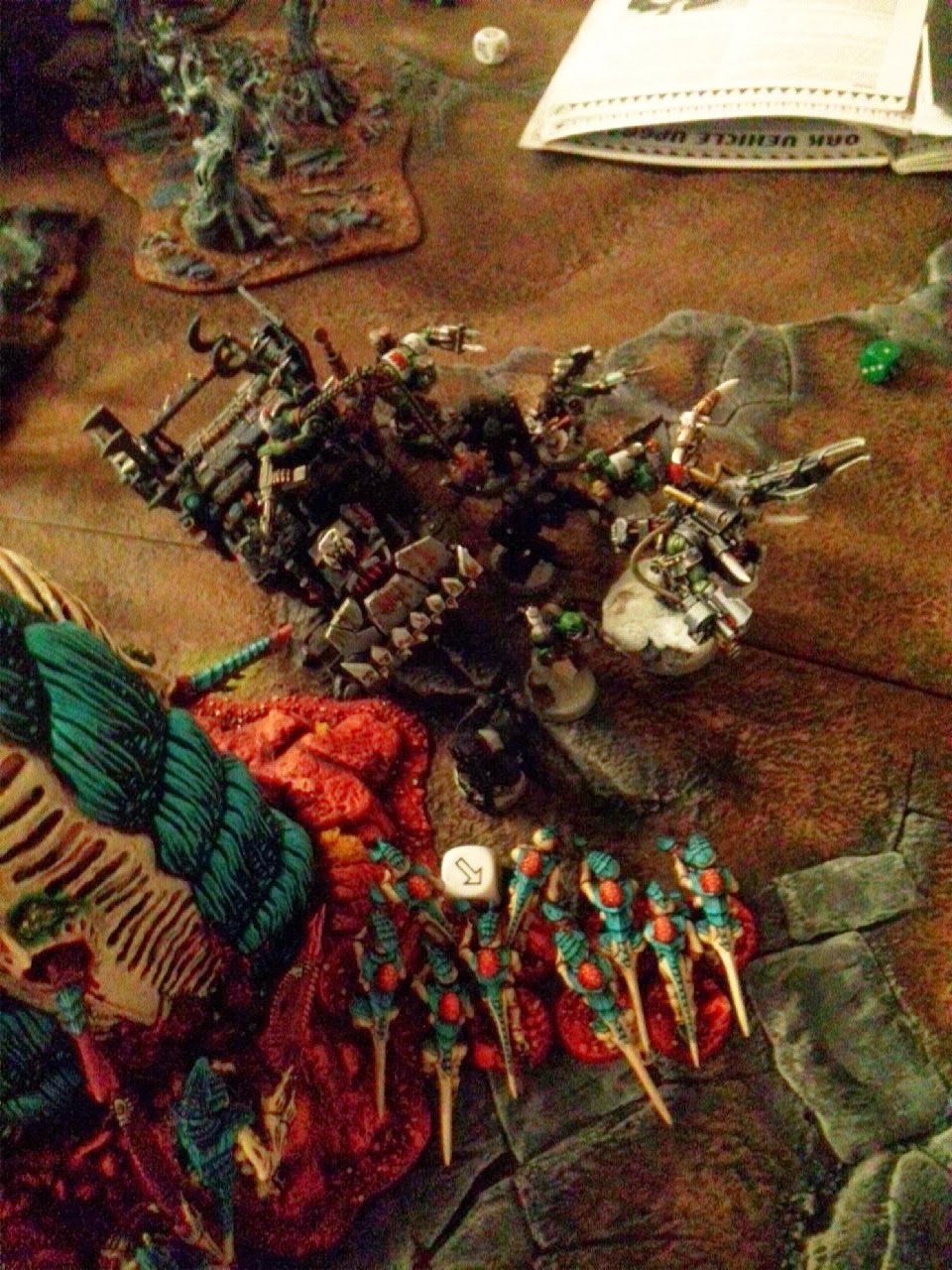 Now Ghazgkhull and the Nobz were right in my face, with only a screen of Gaunts to impeded their progress. In my turn my Troop Tervigon spawned out on 5 or 6 which surrounded my own objective which typically was booby trapped. The HQ Tervigon continued to spawn another 9 or so. The Termagants were whittled away by the Stompa allowing the Nobz to charge the Hive Guard, sweet revenge for the loss of their ride no doubt. Ghazgkhull on the other hand went for the Tervigon, it put 3 wounds on it after it Regenerated the wound taken in the first turn. Having called the WAAAAAAGGH! everyone was Fearless so the combats ended in stalemate all round. The Stompa had quite a good shooting phase, except for running out of ammo and lined up to take down the Bastion but came up short trying to charge through the dense wooded area, phew! 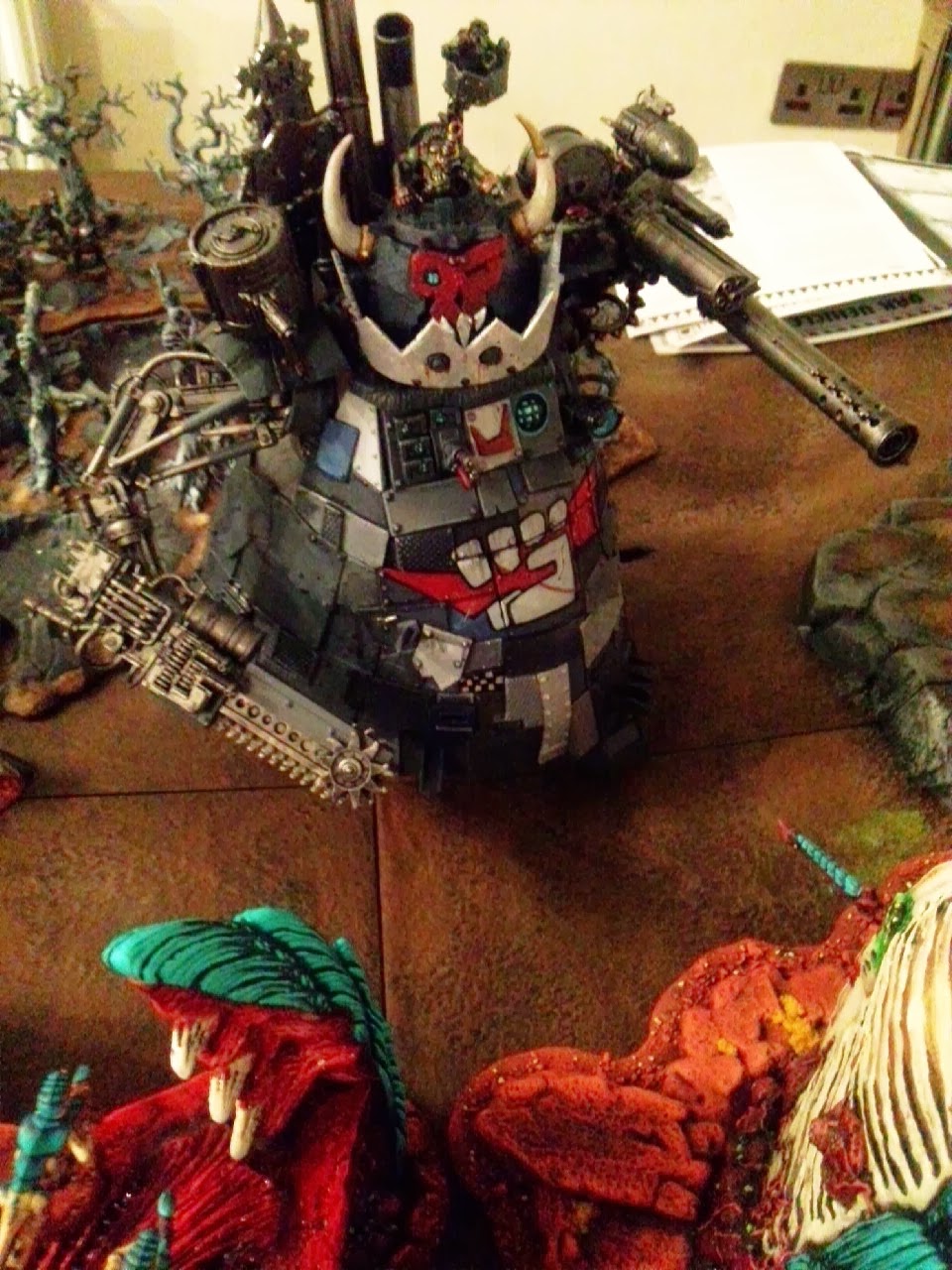 Hive Tyrant arrives from Deepstrike, deviated 11" and unbelievably was just on the board edge. He'd later be targetted by all the Orks in the area but managed to dodge everything like some aerobatic ace. Spore Mines Deep Struck also to surround the Targetting Relay objective. I think the Hive Tyrant killed 7 of the 10 Orks . Meanwhile my Biovore tried to take out the Orks on the battlements but I forgot they would hit the Void Shield first but amazingly it took out one of it's two shields! 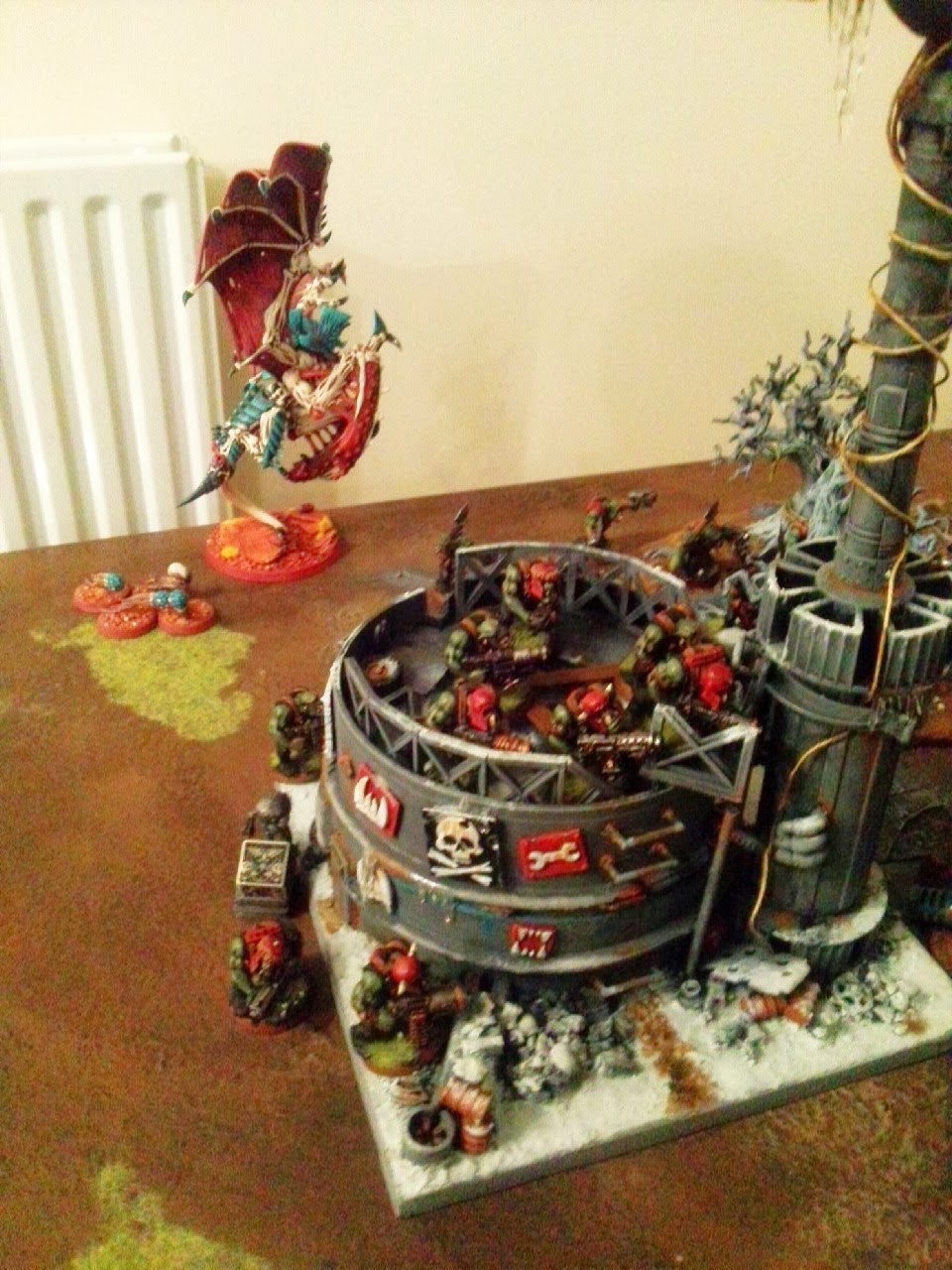 The Stompa finally managed to get to grips with the Bastion, tearing it a new one, obviously! Thanks to a combination of spawned gaunts Paroxysm, Catalyst and Regenaration the melee in my back field continued on through my turn and Ben's, with the WAAAAAAGGH!over I thought I'd gain the upper hand but he cleverly positioned the Stompa, which confers Fearless to nearby units. I thought it was to face down the Tyrant but clearly he knew more than he was letting on. 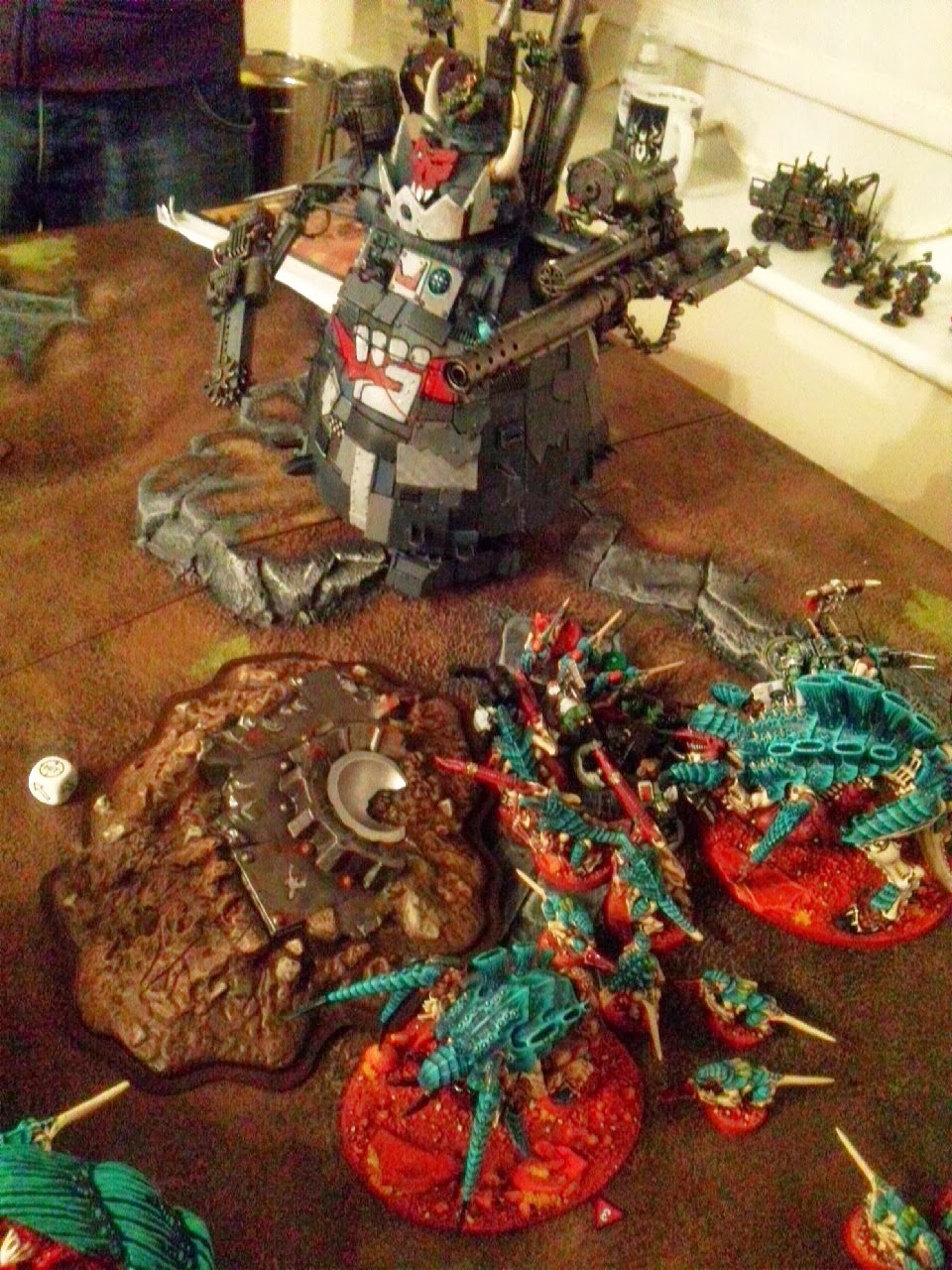 Having felt the Hive crumble above it an enraged Trygon burst from the wreckage to confront the beast that 'kicked the termite mound' [I'm forging a narrative here!]. At the very least he was going to be an obstacle the Stompa could not ignore to get past and get to my scoring units on my objective. 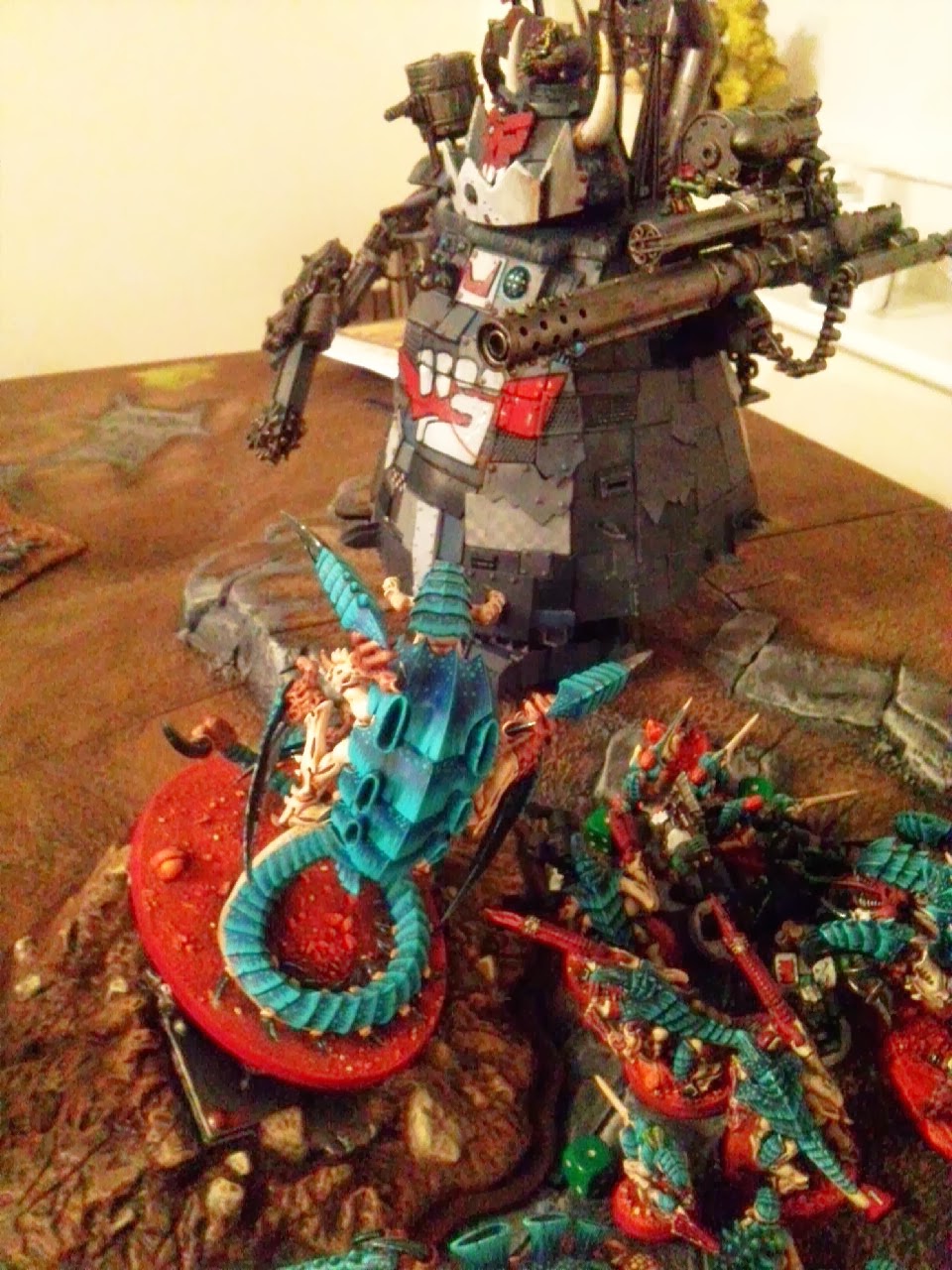 Spawned Gaunts attacked Ghagkhull and more gaunts were spawned to chase down the Stompa and 'tarpit it. Meanwhile the combats continued with the odd wound lost here and there but I think I was coming out of this better thanks to plenty of Catalyst, Paroxysm preventing Ghazgkhull being effective -3 WS&BS for two two game turns! Regenerations worked and although I wasn't playing Catalyst correctly - the psyker and a unit 12" get FnP, I was only playing it a unit 12" gets FnP the results were still good. 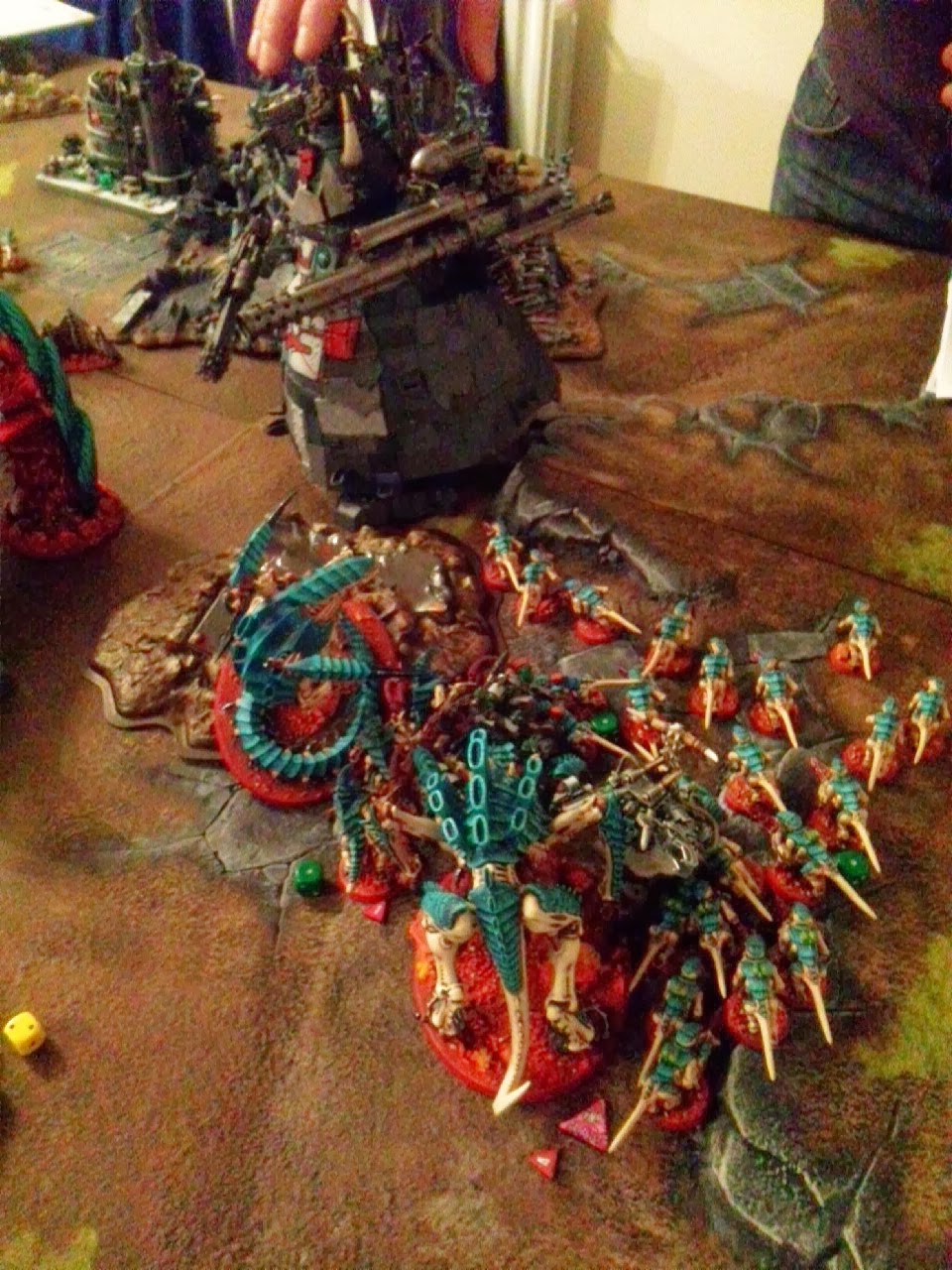 The Flyrant Vector Struck and did enough to wipe out the remaining Orks, and the Devourers took a few Gretchin too. I think he was eventually shot down at one point, but miraculously survived the impact and any subsequent shooting. Meanwhile my 30 gaunt Brood was spread out across the board, trying to reach Ben's objective but also stay within Synapse and close to my own objective should I fail to reach Ben's and fail to bring another unit of gaunts up to secure mine. 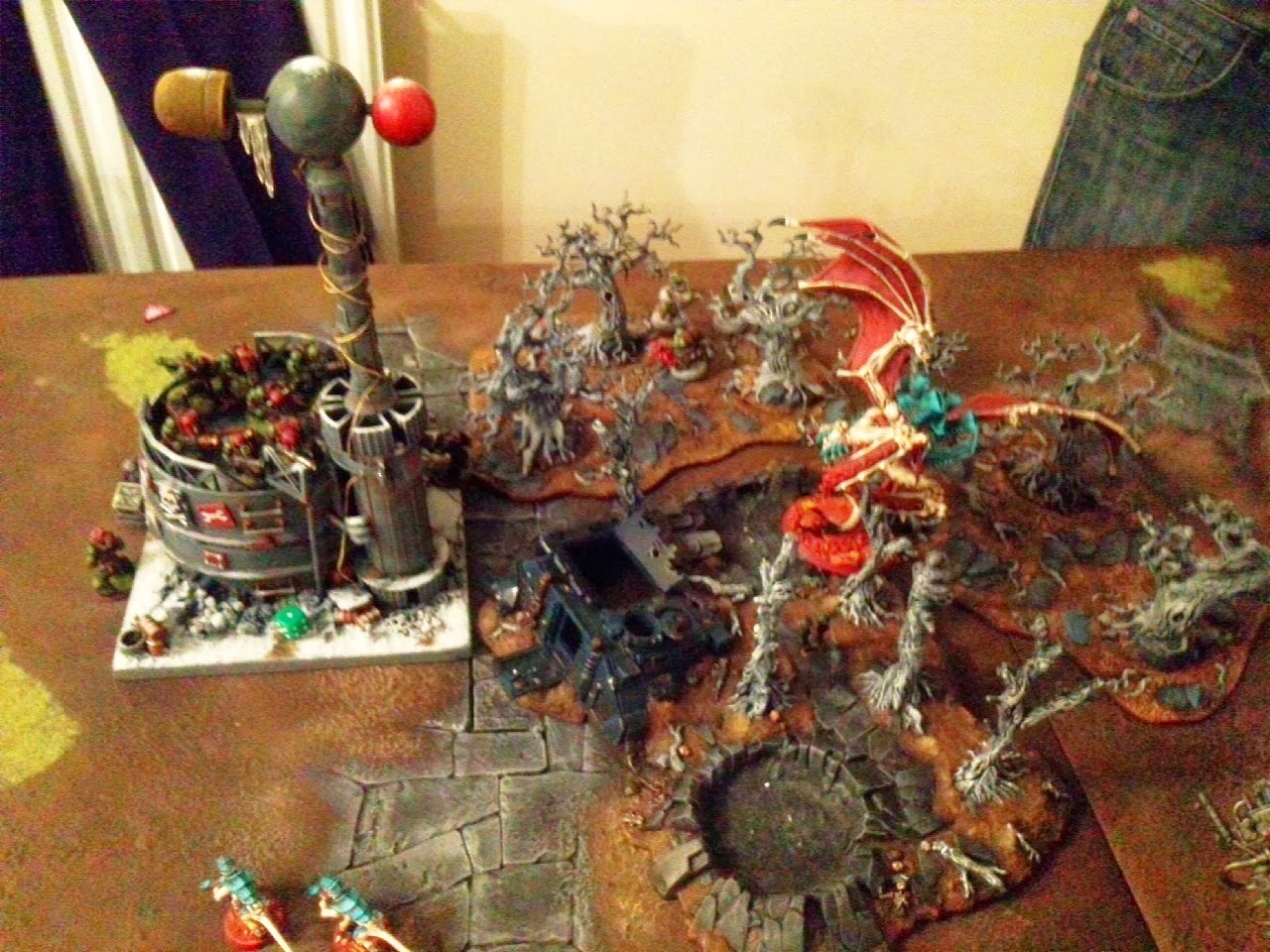 The plain Tervigon got popped by the Stompa, it took some gaunts with it but no more than 6 or 7, it was even more desparate to get gaunts onto my objective now, just behind the right Caillary support. 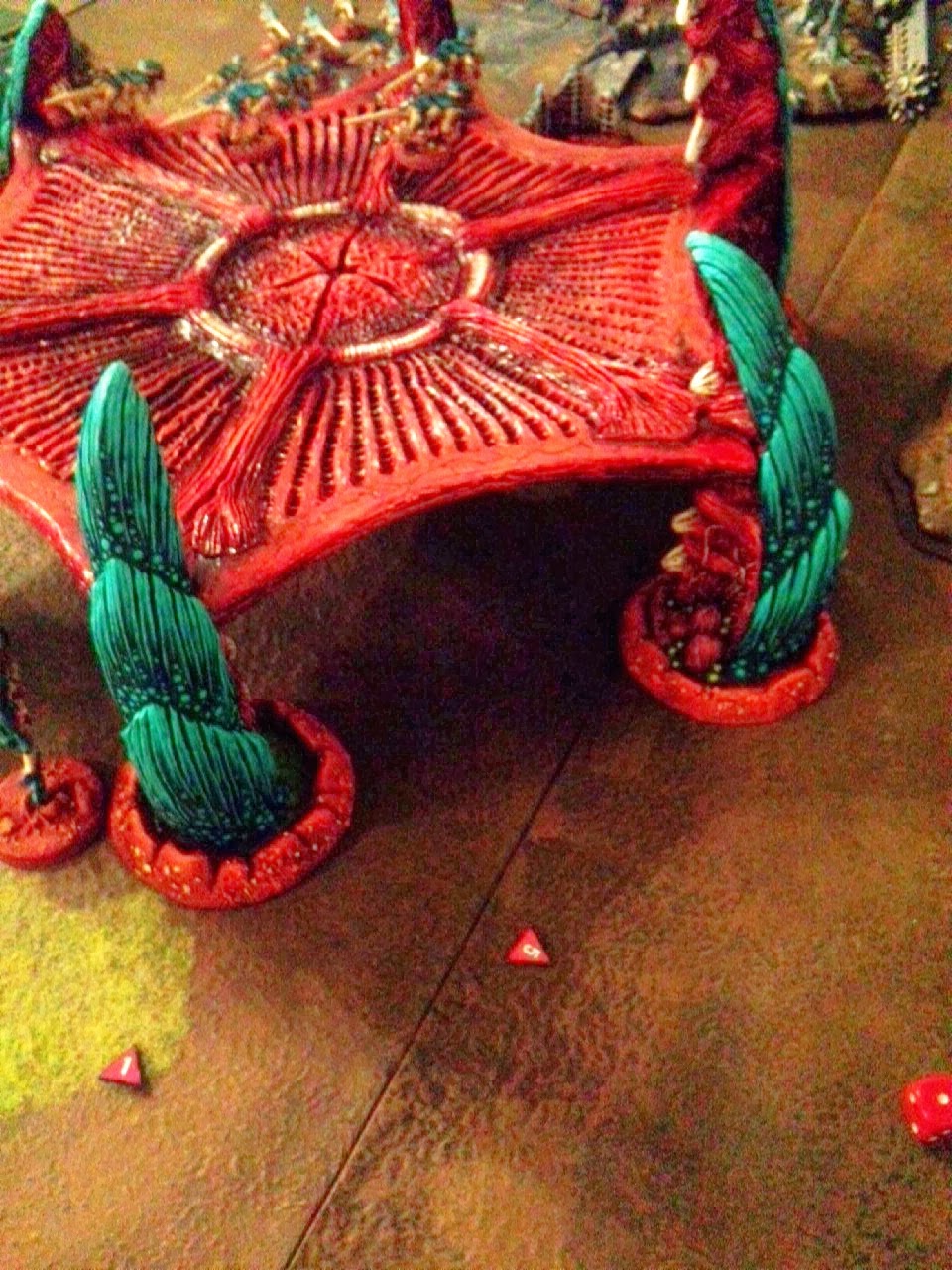 The Stompa decided to take on the Trygon, it managed to get 3 pens on it, the 5 translating to a 6 thanks to AP2 but that 2 just gave me one extra Hull Point of damage :( 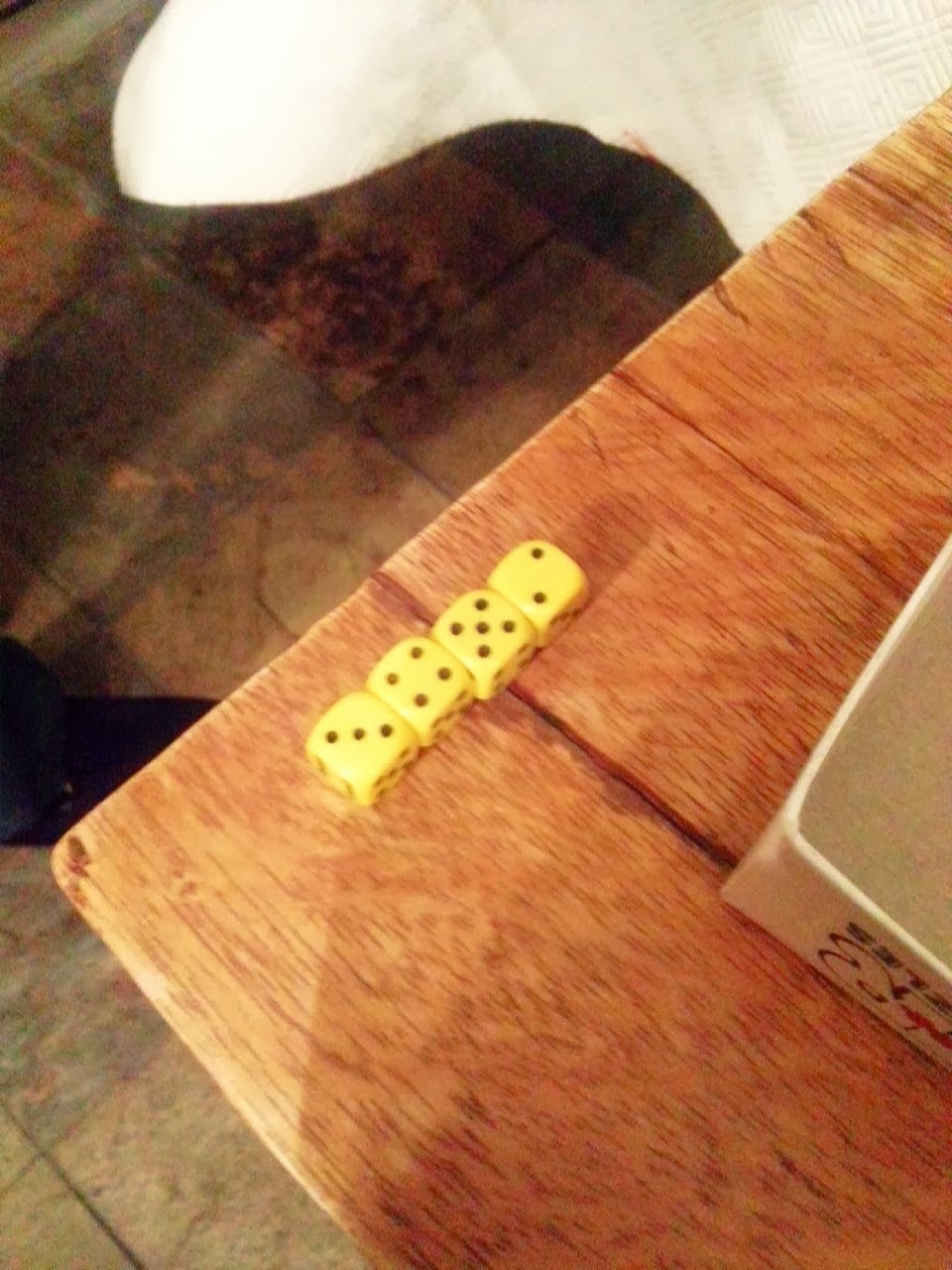 The Stompa struck back in return and only hit once! :) 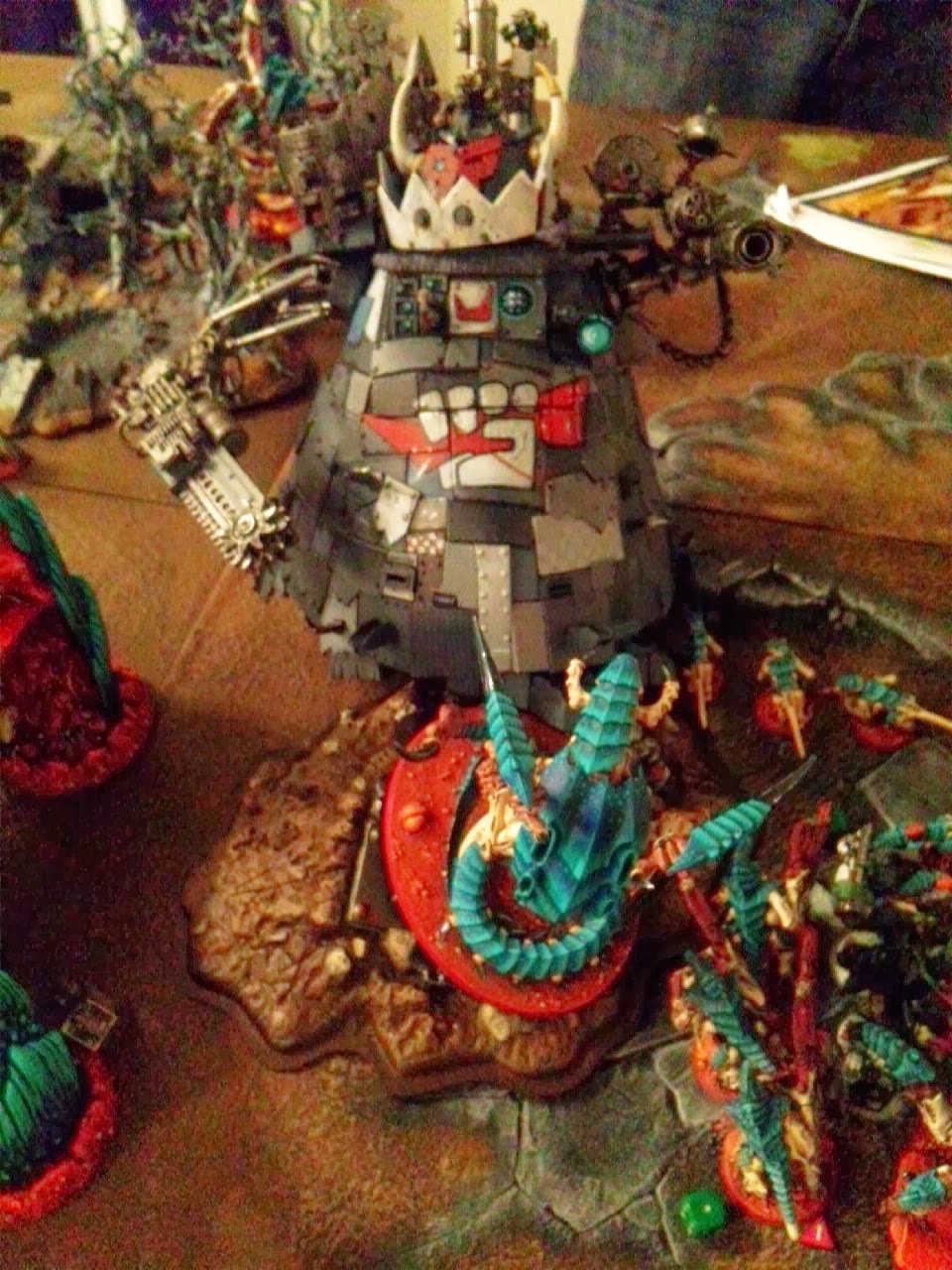 However it was a Deathblow and the Trygon took about 9 wounds! :( 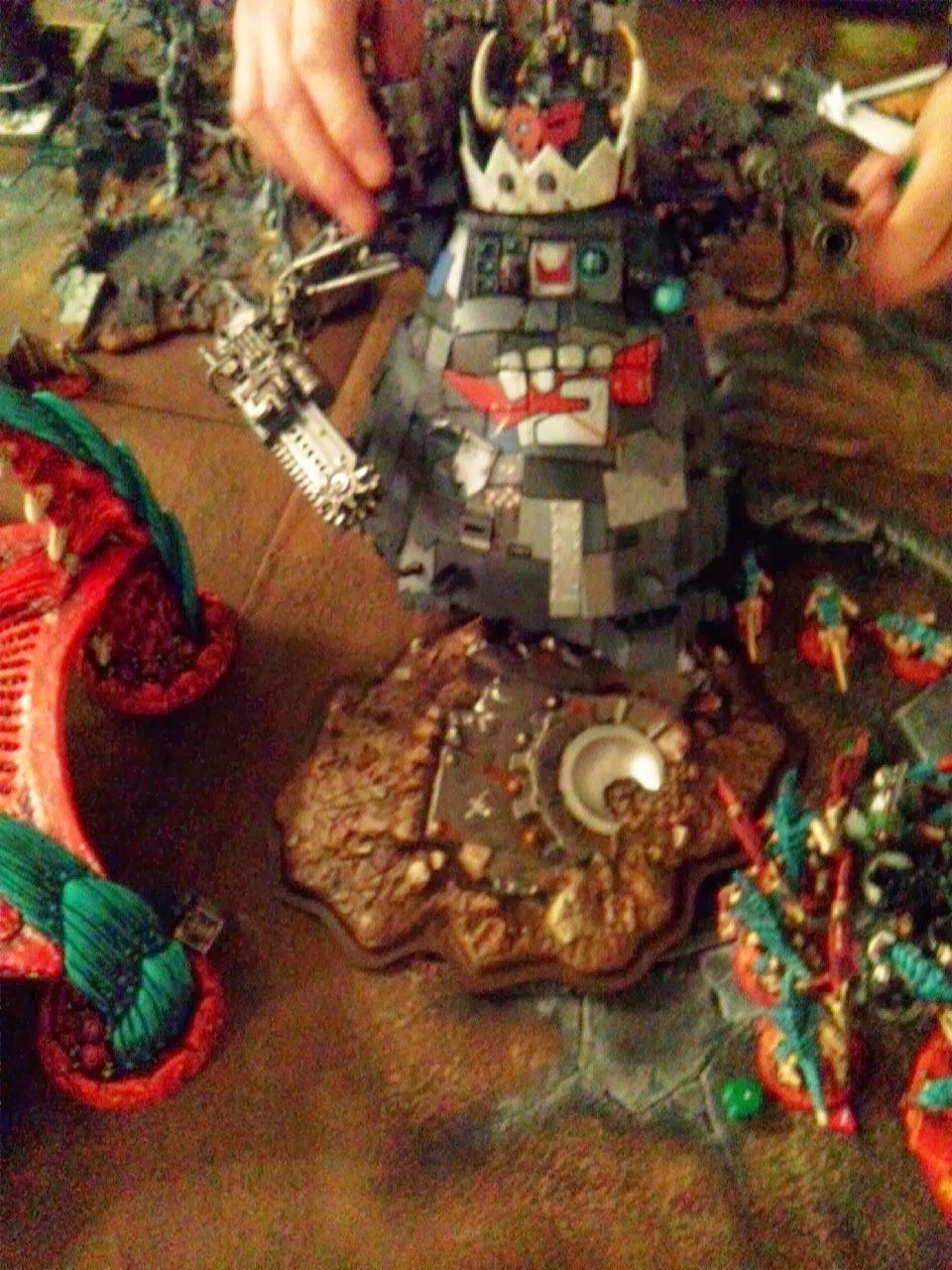 The Hive Guard managed to overcome the Nobz and Ghazgkhull finally succombed to the weight of gaunts, with a little help from their brood mother [who was on 5 wounds now!]. They'd been nipping at his ankles, wounding him once per turn and finally he failed hi invul and died. 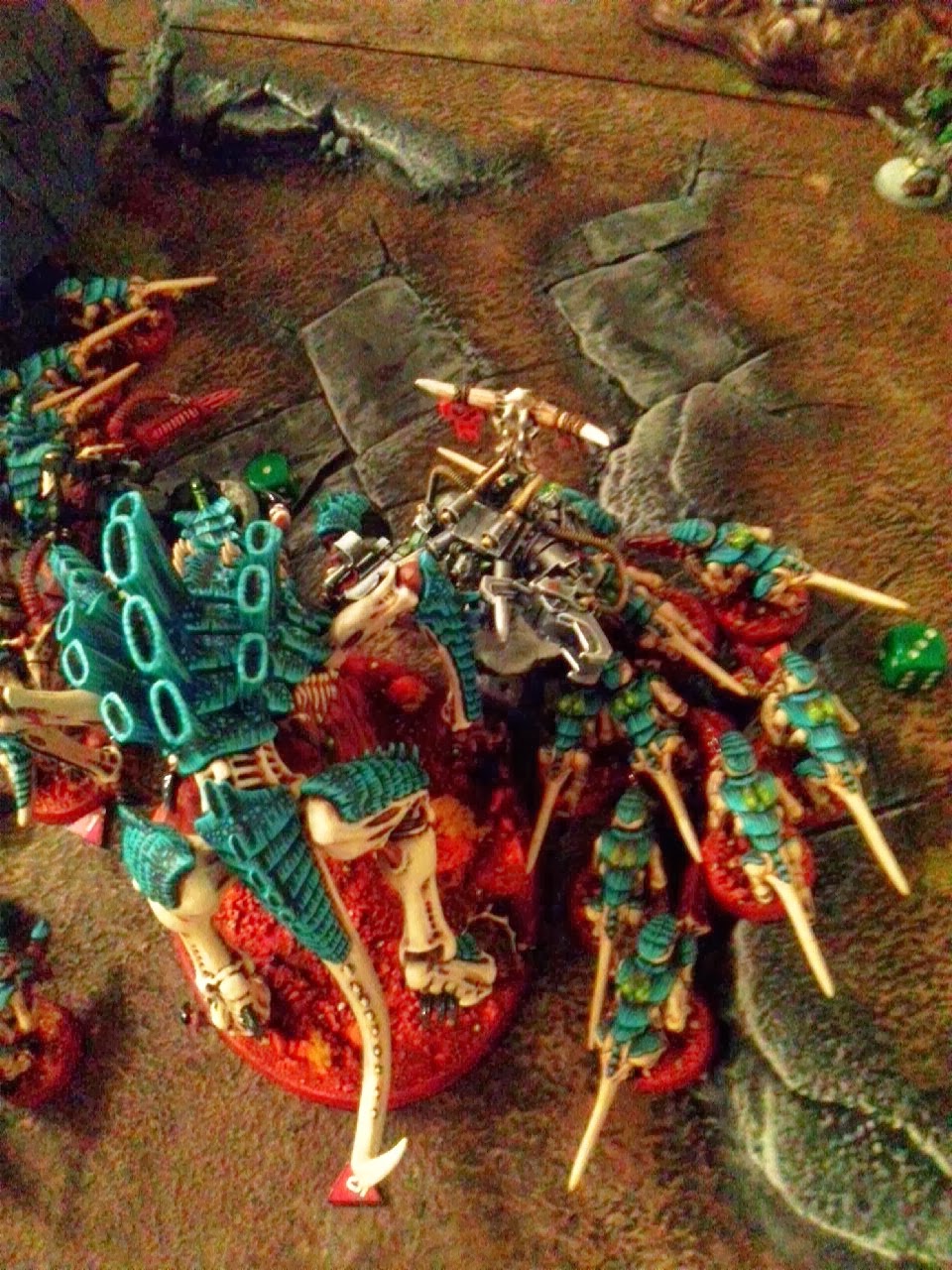 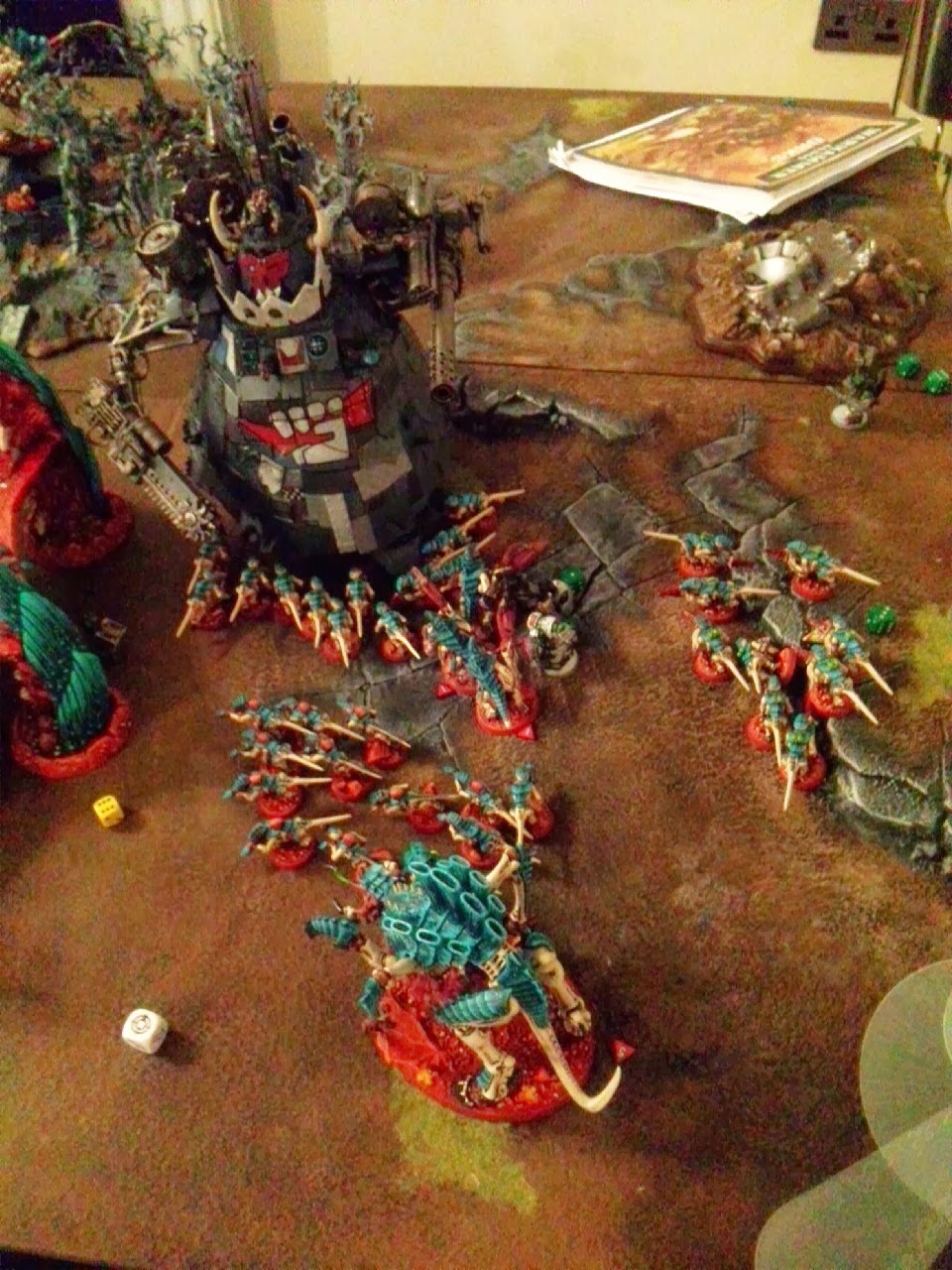 Over on Ben's side of the board my Flyrant had headed back and stomped on the Orks in the VSG and with that the situation had tipped in my favour. With the big blob of gaunts only a few inches from his objective at the end of turn 5, his Stompa tied up and my remaining gaunts within easy reach to secure my own objective, his Warlord dead and mine far from any danger we called the game around 1am!

Ben is struggling to come to terms with the Stompa, he has quite mixed opinions, I think perhaps if you're going to invest in a VSG it makes little sense to step out from under it in the first turn, but then that D-weapon needs to be used. I think the only drawback is the cost and the limited amount of troops he has to secure objectives thanks to it's presence. I believe his tactic was sound but maybe driving thr Trukk up so early was a mistake. It's vulnerable to first blood and is an easy VP to lose. Better to hold it back and deliver it in turn 2 somewhere more decisive perhaps.

As for the Nids, well I was surprised. I'm thinking Catalyst and Regeneration were my saviours here, so that won't always be the case every game. Ben was of the opinion I rolled out of my skin but Regen is 4+ and I think I passed 3 or 4 out of 5 rolls. The FnP was also successful but when you add in Paroxysm on Ghazgkhull the situation changed again. When you both end up with durable units with low WS then you are only going to manage 1 or 2 wounds per turn. The Orks had invulnerable and FnP rolls, I also had FnP but the Tervigon and Hive Guard were high Toughness and the there were extra gaunts spawned to help tie up the situation and add 1 or 2 extra wounds to tip the balance. Because those assaults lasted so long it didn't seem like a pivotal situation but it was.

I'm now having to think whether my alternative 3 Tervigon list is better. I'd have to drop the Zoanthrope and I think the Biovore and a number of other things but the Zoie is replaced with the psychic power and Synapse of the Tervigon. I really found the Zoie a bit frustrating, with Catalyst  and Warp Blast, which is Lvl2 you have to decide if you're going to cast Catalyst  and waste a charge or save them up for the blast...

Anyway, a pleasant situation to find myself in following a rather dismal impression of the Codex, maybe I was wrong all along...
Posted by 40kaddict at 12:00