Amongst the more common Tyranid genus found to frequent the Hive Fleet Gorgon Ferron Splinter fleet are Termagants armed with the fearsome Devourer weapons. 'Devgaunts' or 'Devilgaunts' as they're often called by the more superstitious residents of Ferron Proxima are found amongst the broods that strike without warning. Usually joined by it's monstrous brood mother - the loathsome Tervigon. Or were on occasion bursting from the remains of the sub-orbital deployment pods known as Mycetic Spores, these beasts are not to be dismissed despite their position in the Xenos hierarchy. Ordinarily they were seen as a brood apart, separated from other differently armed Gaunts, their Devourer weapon symbiotes incompatible with their Fleshborer bretheren. However, more increasingly we are seeing Devgaunts intermingling with other less formidable gaunts and providing both range and weight of attacks hitherto unknown amongst Fleshborer gaunts alone. 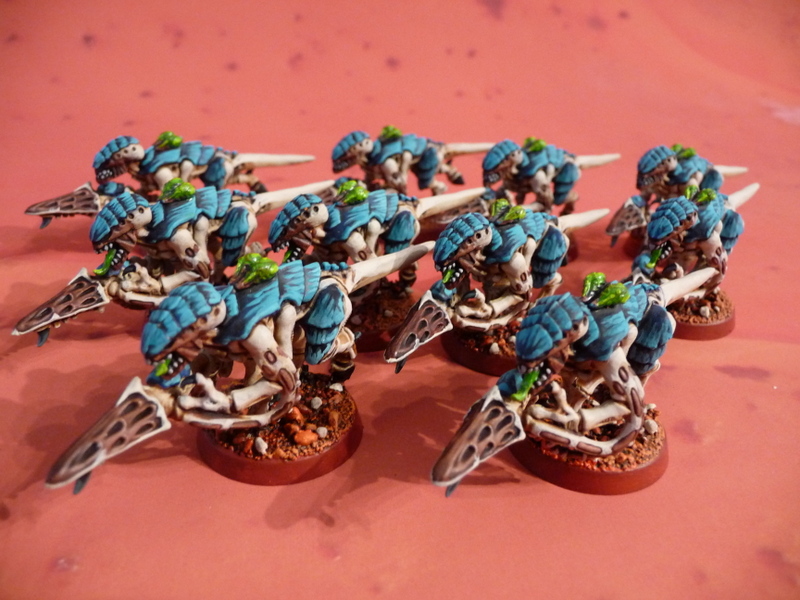 The Devourer weapon is a rotting mass of flesh filled with pulsating worms that are ejected from the weapon thanks to a bio-electric shock. Upon impact with their victim the parasitic invertebrates begin to bore into exposed flesh or infest any orifice they can find. The victim becomes a seething mass of agony as the worms eat through to their brain and certain death. The horrific display can be too much for the companions of the victim. Quite often the sight of their colleague being eaten from the inside and screaming in agony can cause witnesses to flee in horror. 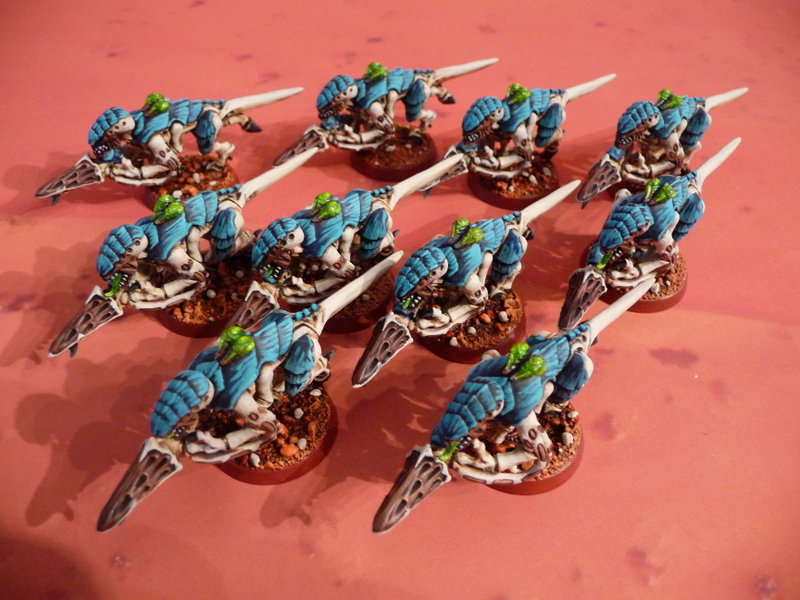 These particular Devgaunts caught on camera by servo-skull Xt-36^9 show what appear to be a Toxin Sac biomorph. These glands are a breeding ground for caustic poisons and virulent toxic fluids that coat the creatures claws and teeth making it far more dangerous than it's stature would suggest. However, some Bio-magi have posited the suggestion that sometimes these are just vestigial sacs, with no real function aside from providing its brood mother with a means to keep track of its offspring. The very concept that such alien intelligence is at play has brought Inquisitorial censure for those magi foolish enough to publish their works openly. 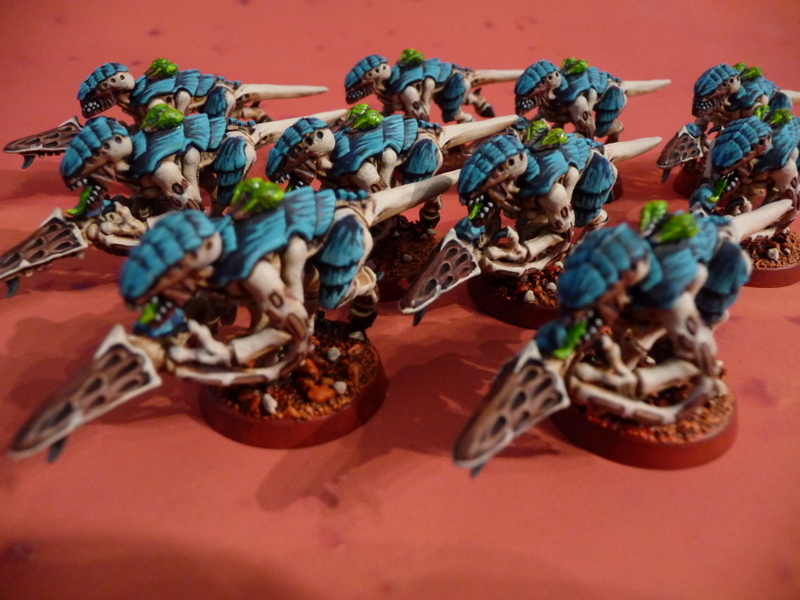 More recently the burrowing worm has been less virulent in it's attack upon the victim. Initial tests by the revered Bio-magi converging on Ferron Proxima to study the captured Xenos beasts are indicating that something within the Ferron eco-system is having a weakening affect on the Tyranid bio-form. In fact a transcript from the treatise 'Ye Battle of the Planetes' by one of the first Bio-magi to observe the weakness, suggests one theory. Heronimus-Gamaliel Welles wrote:


And scattered about, some next to their primo-genitors, were the Tyranid filth —dead!—slain by the putrefactive and disease bacteria against which their systems were unprepared; slain as their Capillary Towers and Bio-Titans were being slain; slain, after all man’s devices had failed, by the humblest things that the Emperor, in his wisdom, has put upon this planet.

For so it had come about, as indeed I and many men might have foreseen had not terror and disaster blinded our minds. These germs of disease have taken toll of humanity since the beginning of things—taken toll of our prehuman ancestors since life began here on Ferron Proxima. But by virtue of this natural selection of our kind we have developed resisting power; to no germs do we succumb without a struggle, and to many—those that cause putrefaction in dead matter, for instance—our living frames are altogether immune. But there is no bacteria similar to the strains of Ferron Proxima whence the Tyranid came, and directly these invaders arrived, directly they drank and fed, our microscopic allies began to work their overthrow. Already when I watched them they were irrevocably doomed, dying and rotting even as they went to and fro. It was inevitable. By the toll of a billion deaths man has bought his birthright, and it is his against all comers; it would still be his were the Tyranids ten times as mighty as they are. For neither do men live nor die in vain.

Here and there they were scattered, nearly fifty altogether, in that great gulf they had made, overtaken by a death that must have seemed to them as incomprehensible as any death could be. To me also at that time this death was incomprehensible. All I knew was that these things that had been alive and so terrible to men were now dead. For a moment I believed that the destruction of Ultramar had been repeated, that the Emperor had repented, that the Angel's of Death had slain them in the night. 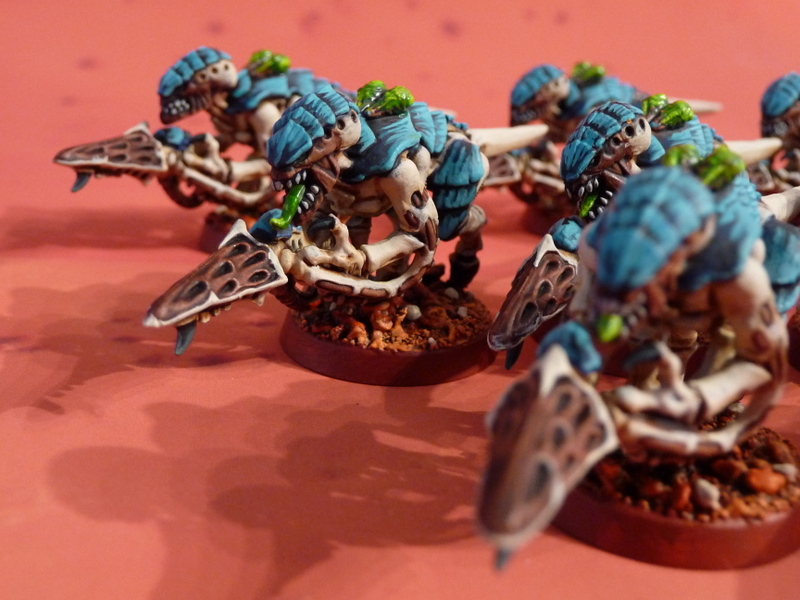 However, there is also some evidence that points to the fact that the biological absorption of the Wraithbone debris scattered about the surface of Ferron Proxima that initially brought about the heightened psychic mental abilities of the Tyranids, has now begun to weaken their physical being. For it is well known that the Xeno Eldar are weak and feeble due to their repeated exposure to the Wraithbone. Documentation abounds as to their avarice to this otherwise worthless material, they surround themselves by it like Magpies, or at the worst addicts. Therefore continued expose has escalated the demise of their race like a withered lifeless limb.

They even have the blasphemous audacity to sculpt buildings and heretical automata out of this excretion, instead of using the sanctified and Mechanicum approved materials of Adamantium and Rockcrete. Rumours suggest they even trap the souls of their ancestors in shambling bipedal machines, the depravity of the Xenos filth know no bounds. These obsceneties are a poor mockery to the glorious majesty of the venerated Adeptus Astartes dreadnoughts and Titans. These Wraithbone constructs are more akin to mobile torture cells than the shrines of honour borne by only the finest Space Marines. But that is the Eldar way and brave and just human beings cannot begin to comprehend the alien mind, else face re-education.