First match of the day and it's Paul Logan with Tyranids.

I set up with the Hive Guard on the left hoping to get in range of the Warriors and insta-kill using my fortifications to get me cover to the Relic. 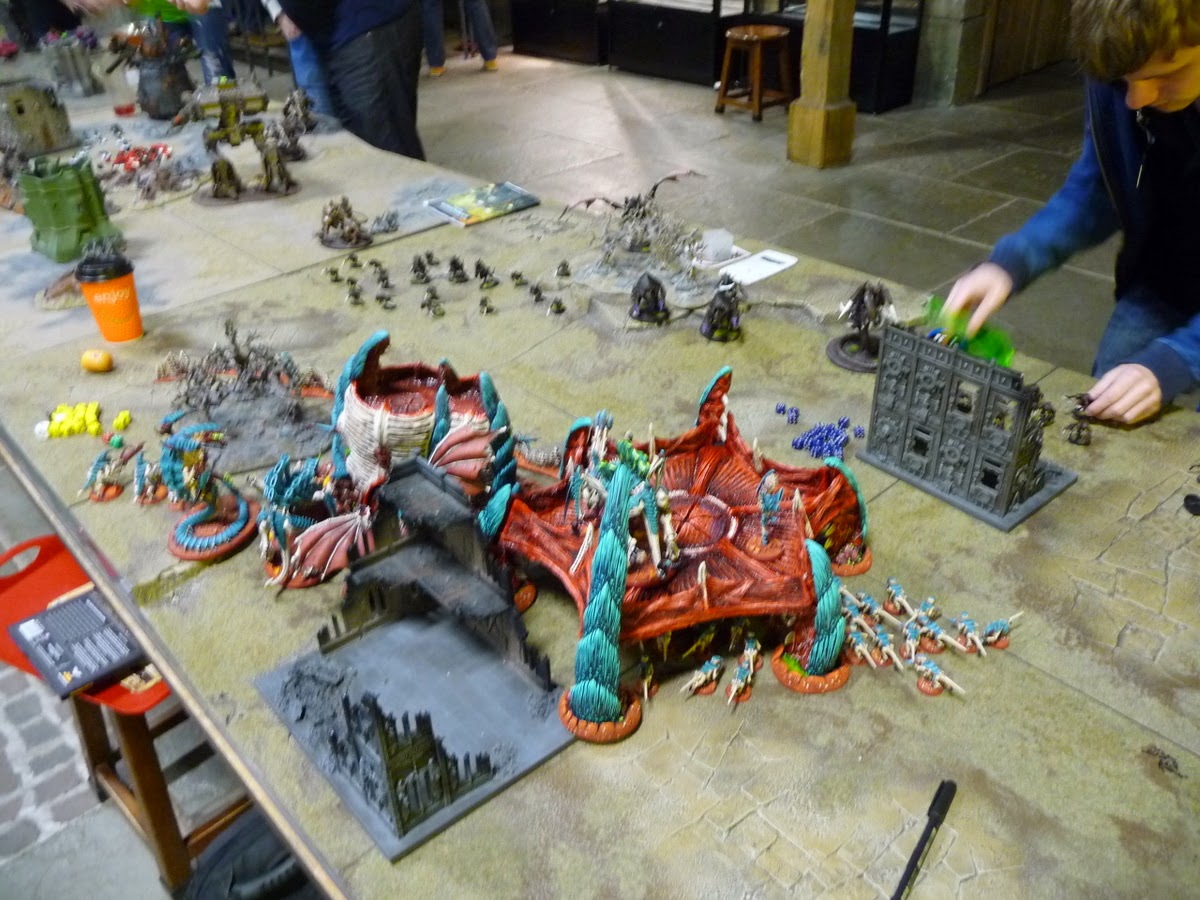 He had around 15 Hormagaunts supported by a squad of Tyranid Warriors, a Winged Tyrant with Lash Whip and Bonesword. 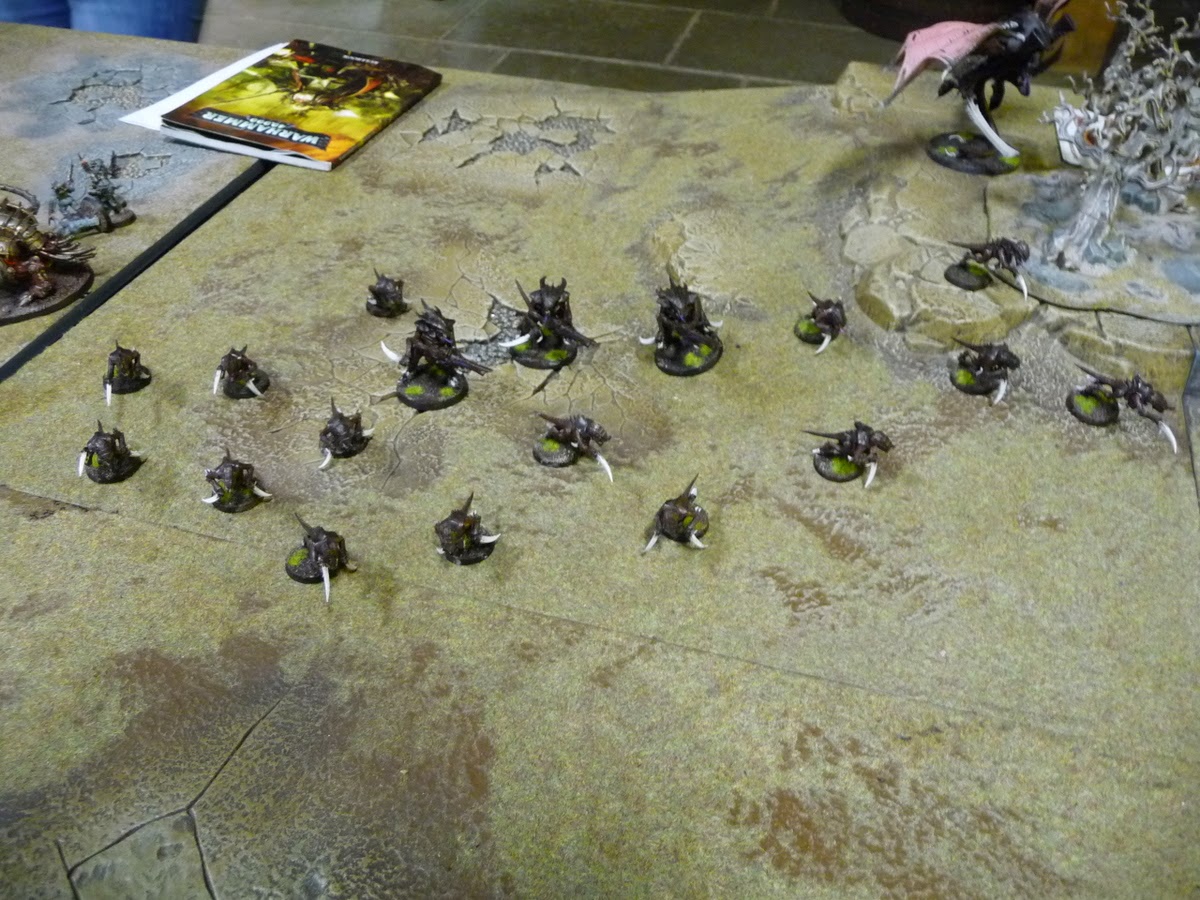 A Tyranid Prime also with LW & BS that was attached to a twin Carnifex Brood. 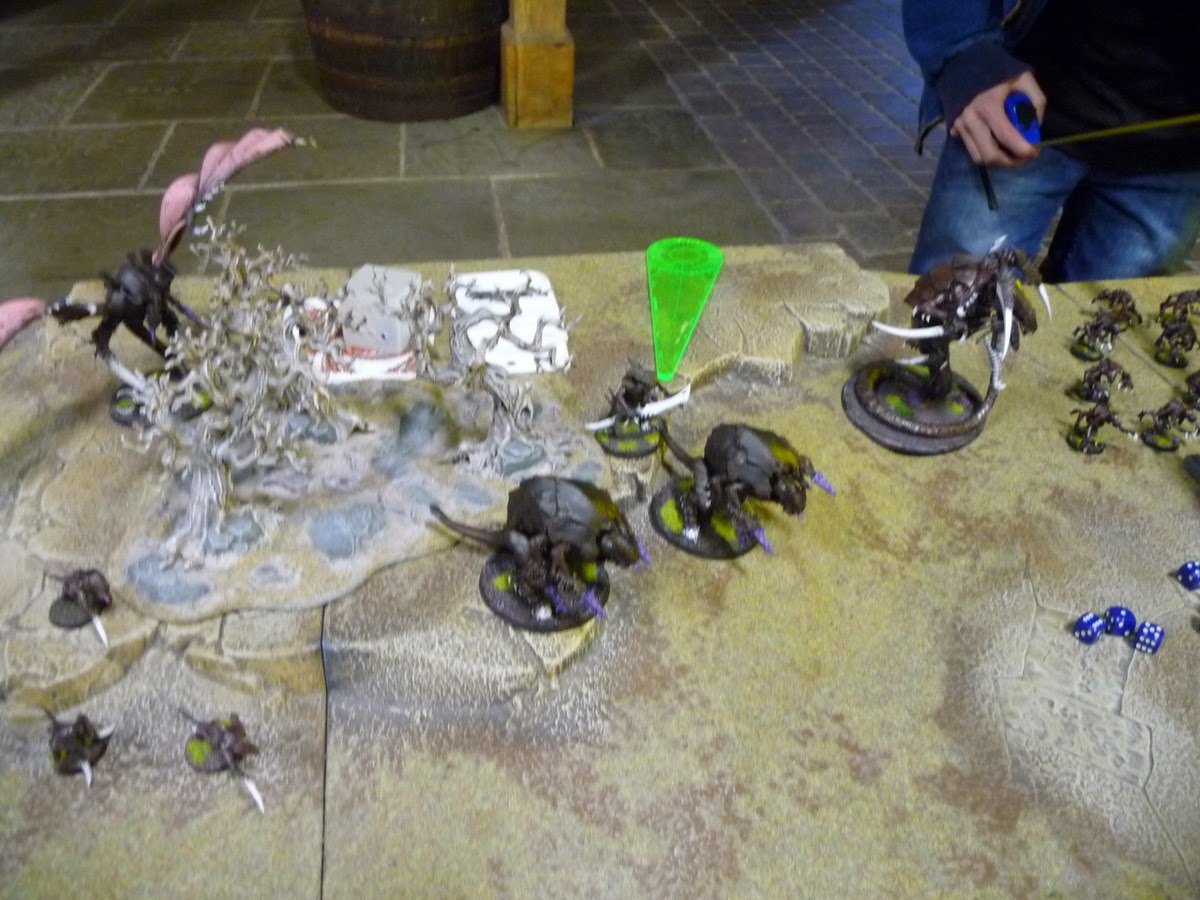 And a Trygon Prime and a large brood of Genestealers, there was also a Crone to come on in reserve. 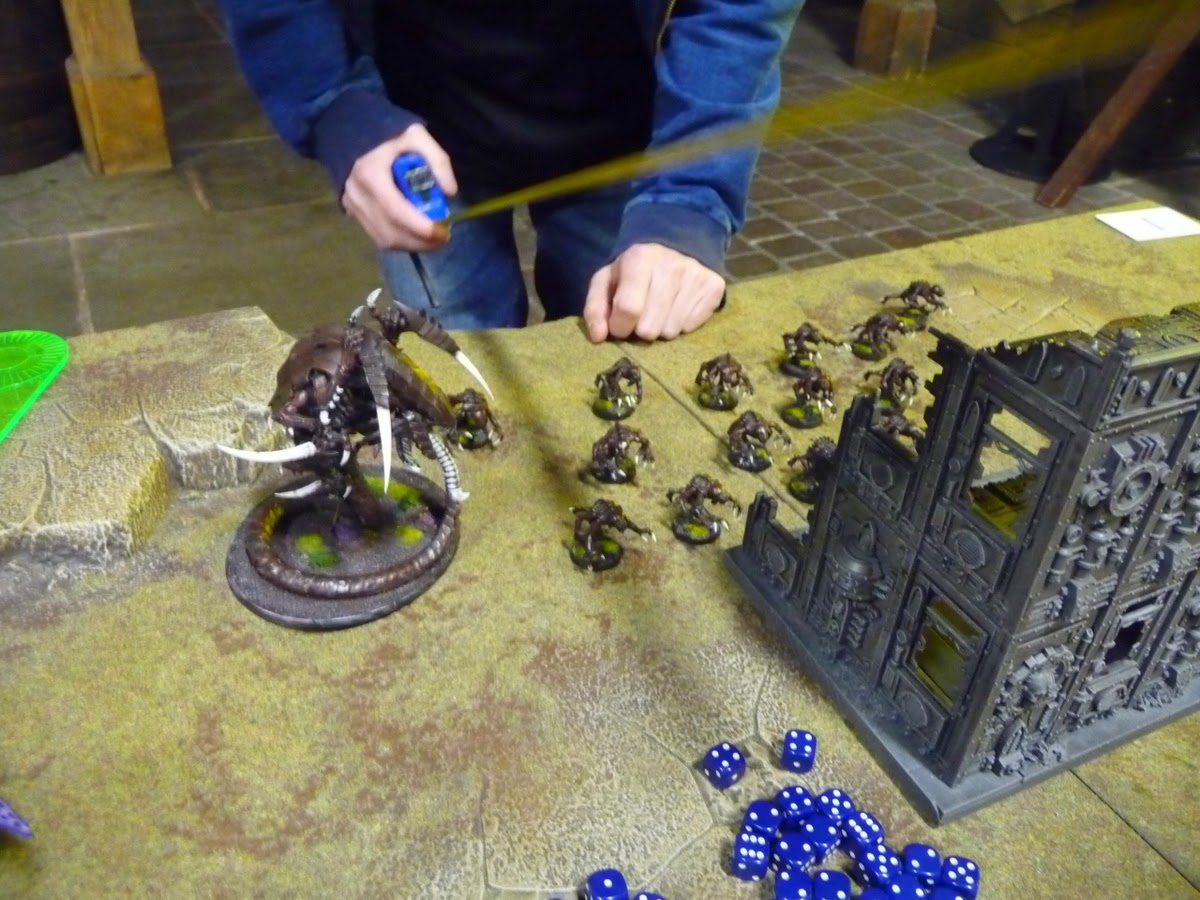 Having seized the Initiative I swooped the Flyrant over to the Stealers hoping to get some serious damage on them. They weren't going to run as the Trygon Prime had them in Synapse but with so many out in the open it was too good an opportunity to miss and it would keep my Flyrant away from his and hopefully I could get the drop on it with my Quad Gun. 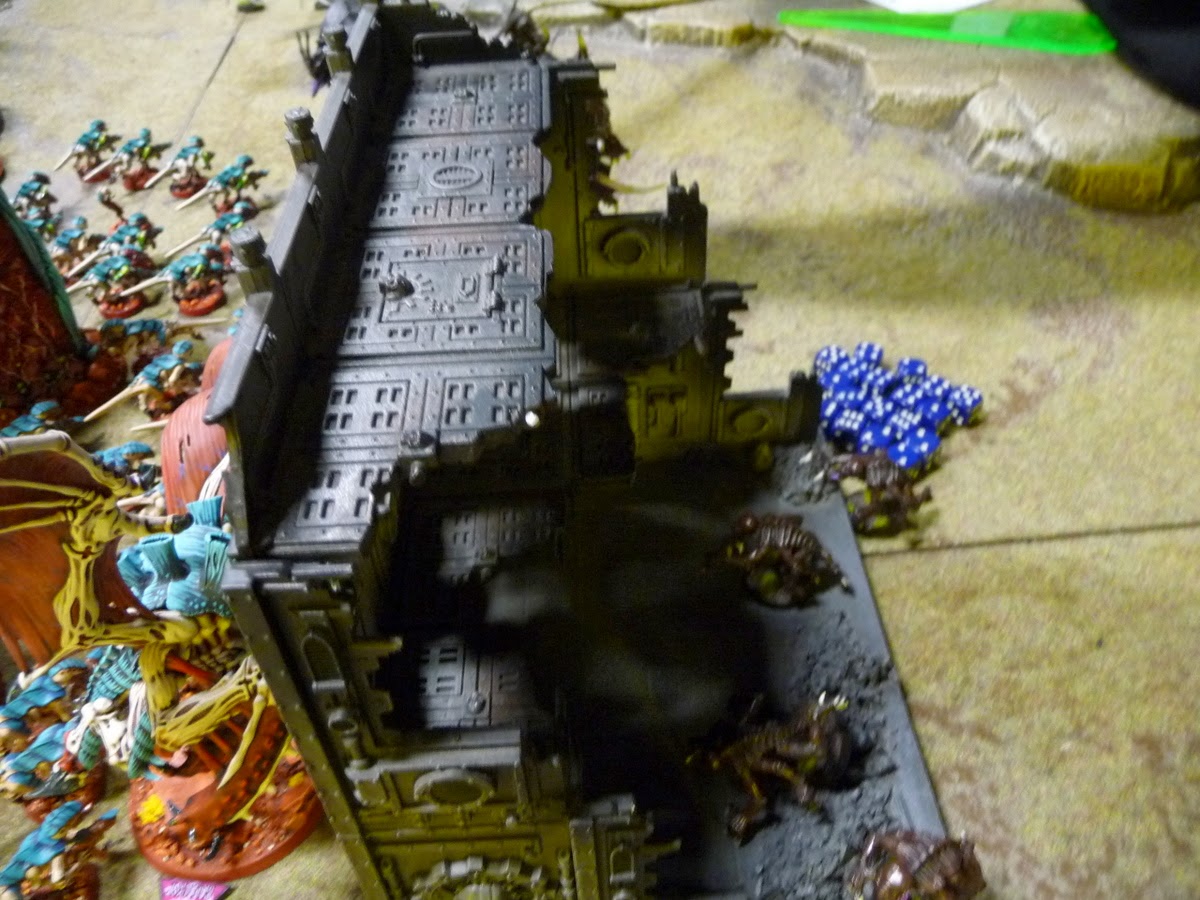 The Great Maw spawned 10 Termagants which surrounded the Relic with their Run move but couldn't pick it up. Meanwhile the CC Tervigon went the long way round the bastion but typically was slowed down by my lazy Trygon - some things never change. 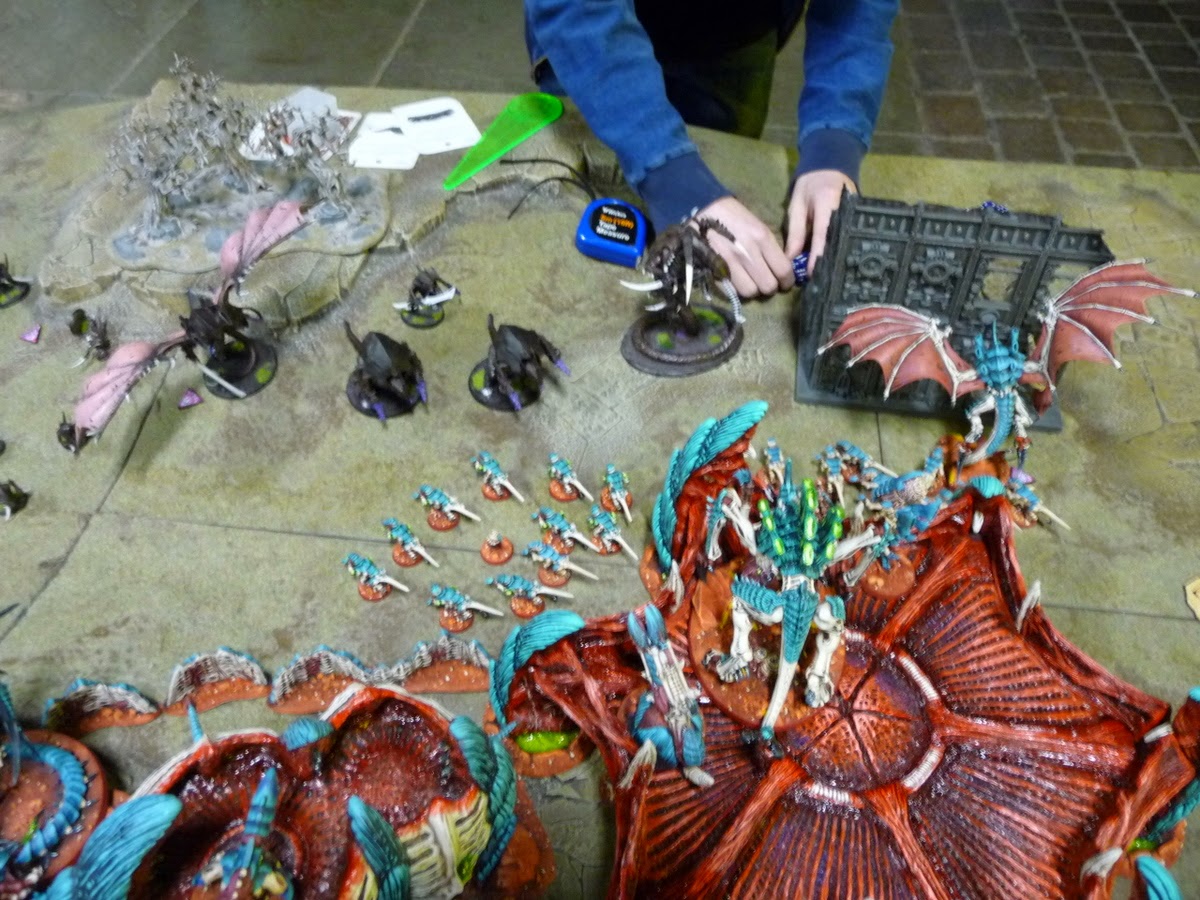 Paul moved everything up, using Catalyst to keep his Flyrant and Hormagaunts safe, the Flyrant just gliding into position. I think a lot of fire was directed at the Tervigon because although I expected the Termagants to die pretty quick they ended up in combat with the Hive Tyrant. 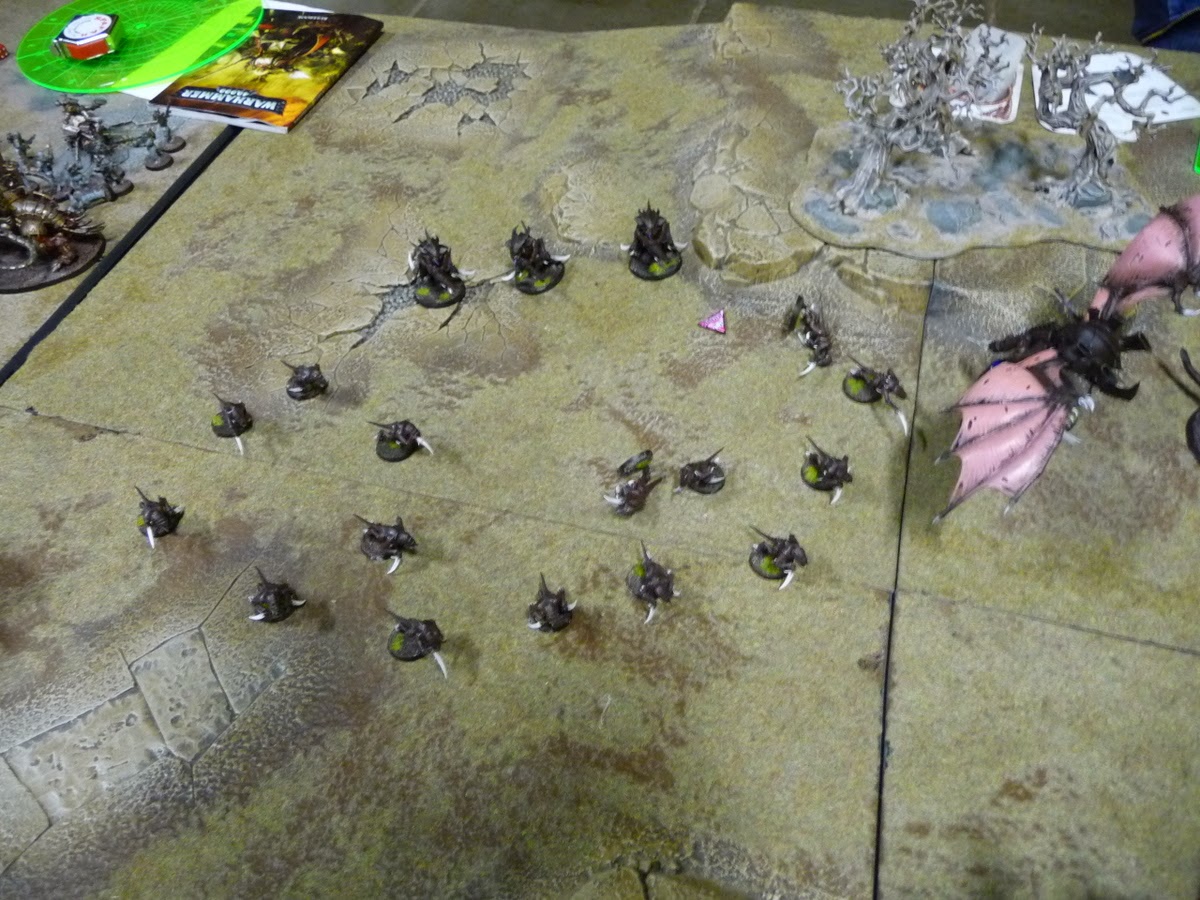 The 10 Termagants about to face the Hive Tyrant and my brood of 30 gaunts tying up the Trygon. I suddenly had an idea to use Psychic Scream on the Carnifex and the Hive Tyrant. I mean it's like a mini version of the Doom. 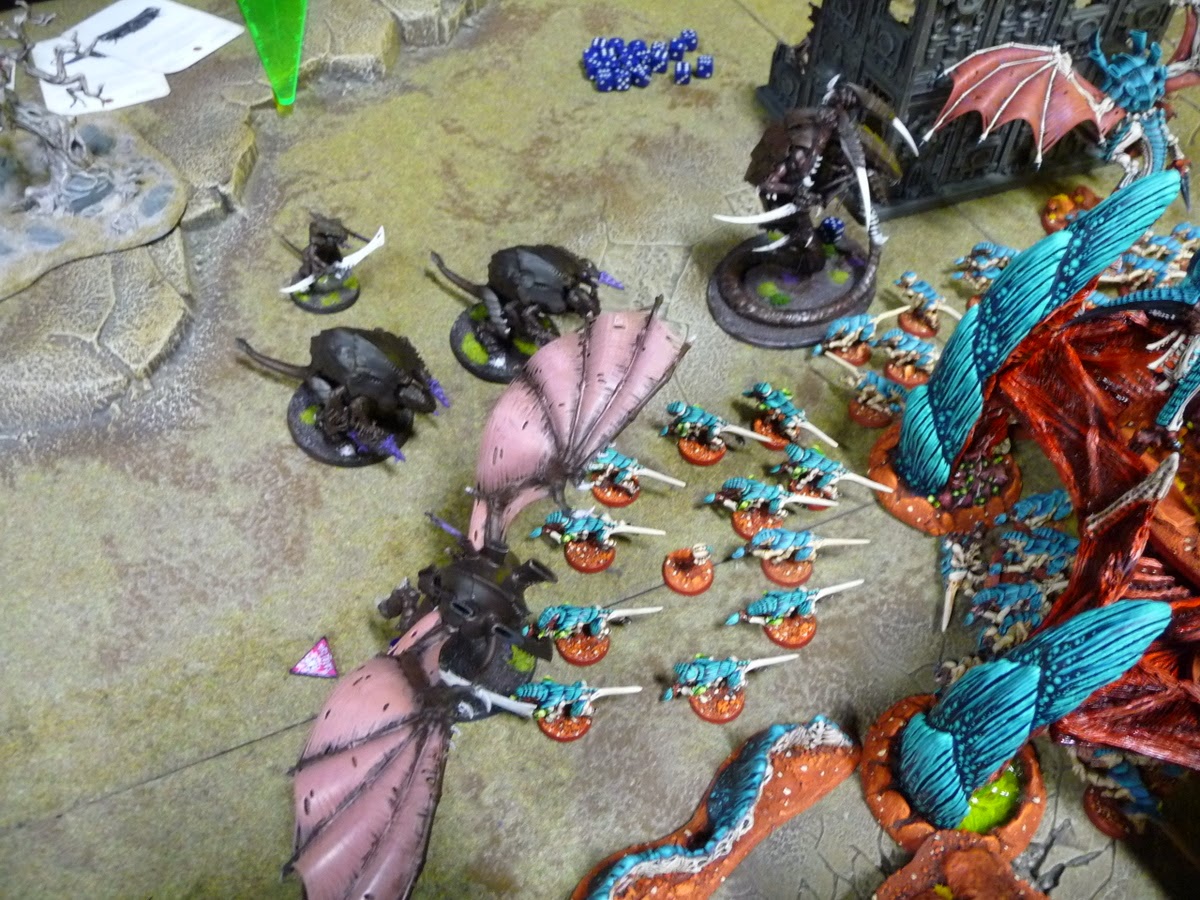 So I jumped the Hive Tyrant over to the Carnifex and hoped to also get the Trygon and Paul's Flyrant but in the end I bottled out/forgot and didn't cast it what with all the Shadows in the Warp floating around. Instead I assault the Carnifex and I'm rudely reminded they're a brood so the two MC's get to overwatch twin-linked Devourers and I end up with only 1 wound left, yeah, that was a mistake. 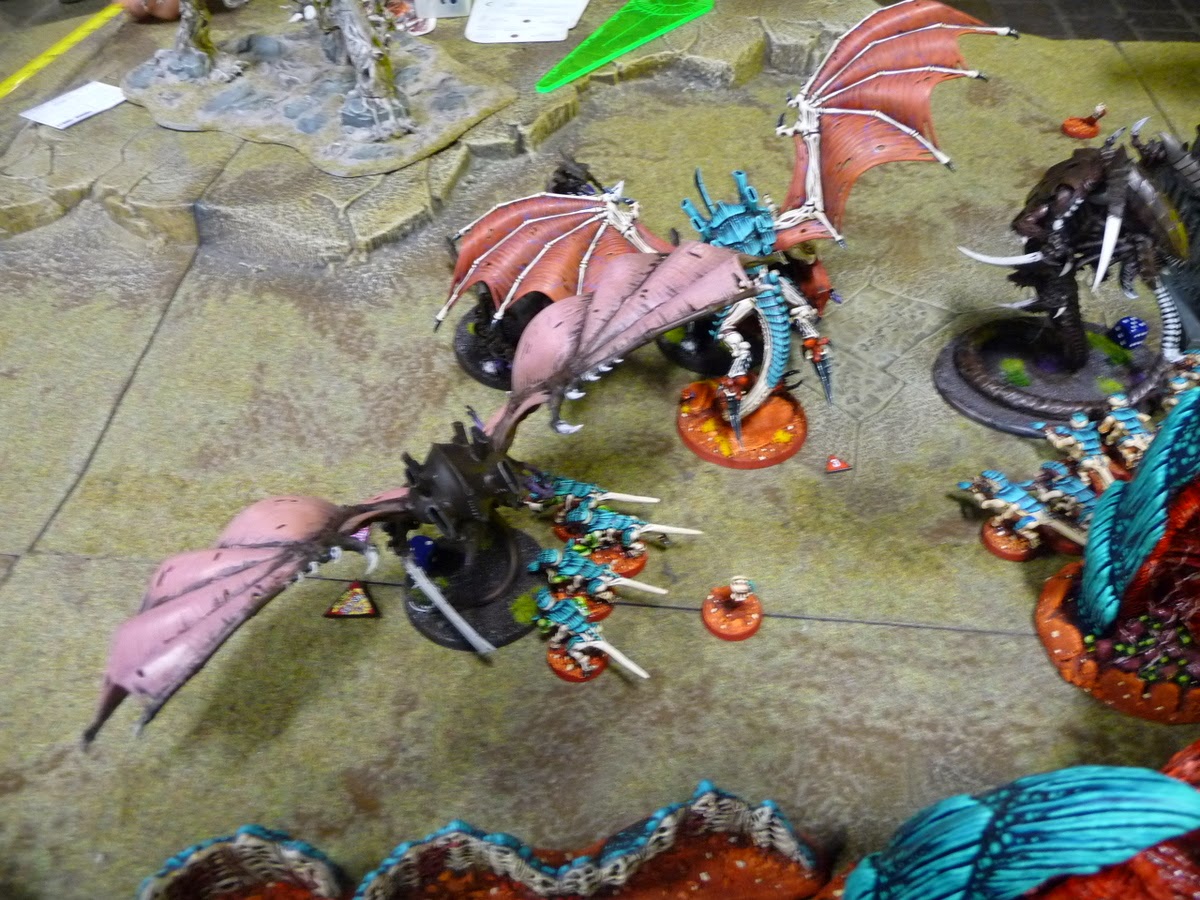 The Hive Guard manage to kill off the Warriors netting me First Blood but Paul's Hormagaunts manage to get into combat with the Trygon, trapping my Tervigon away from all the action around the Relic. 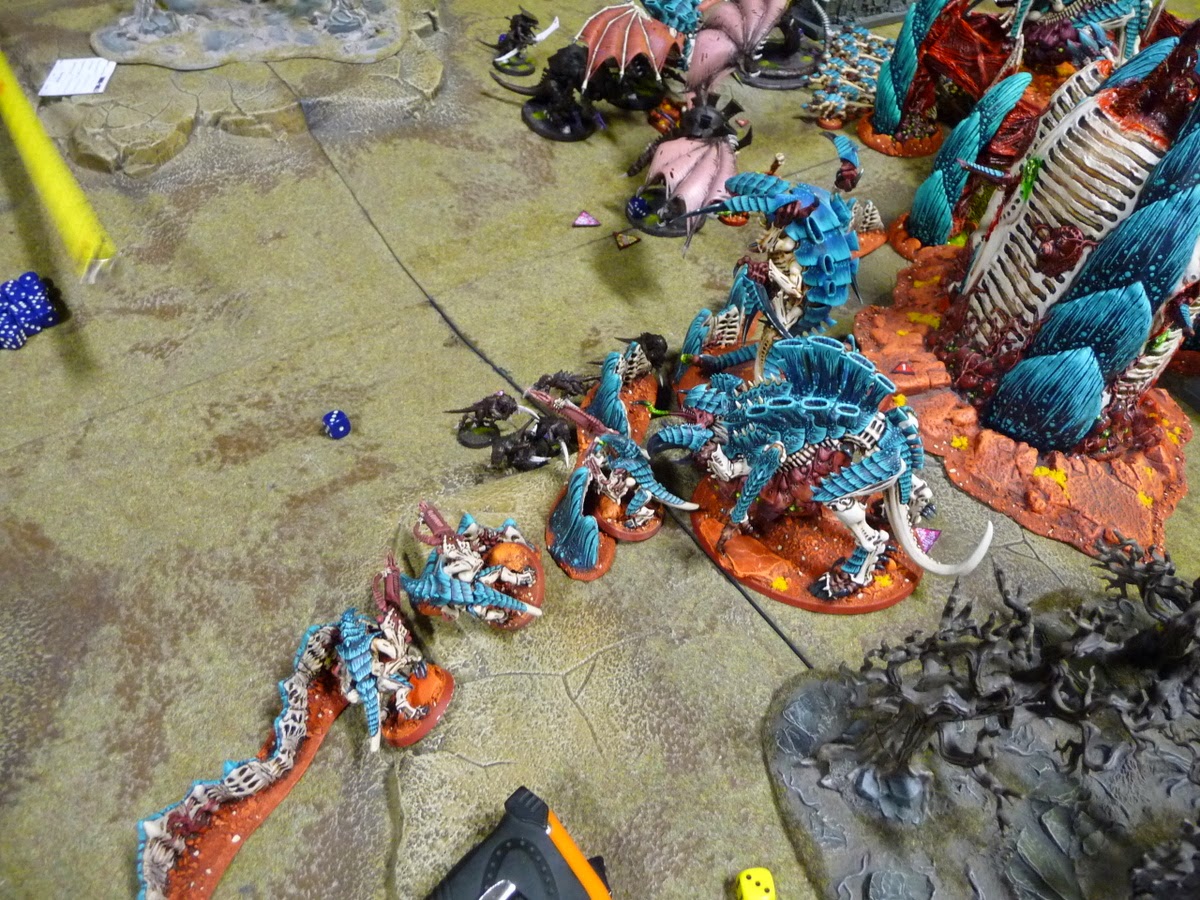 My Flyrant gets brutally sliced up by the Tyranid Prime, it's Boneswords making short work of it's last wound and getting Paul Slay the Warlord. Meanwhile the Great Maw spawns out on 11 in my Turn 3, the Termagants once again trying to get to the Relic but with two Dakka-fexes baring down on them! 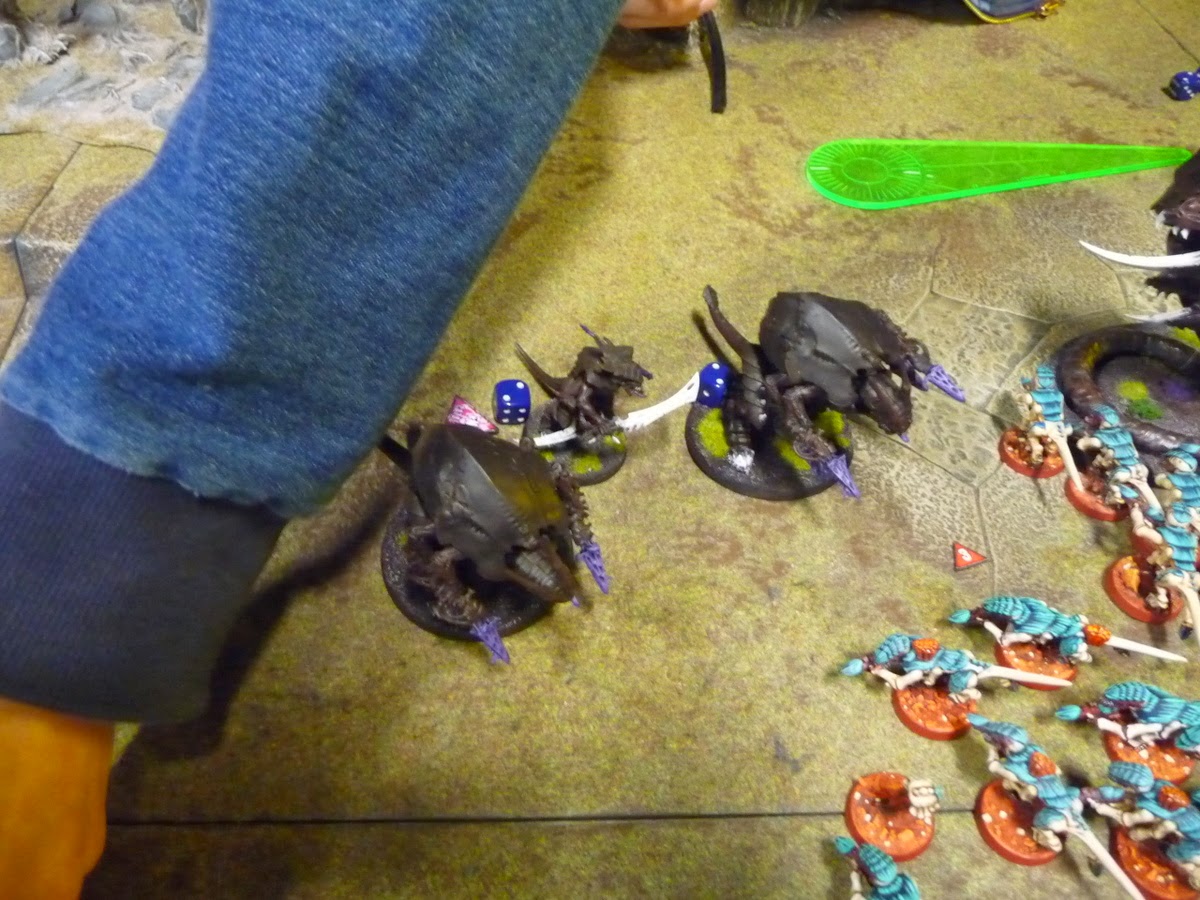 My Trygon manages to kill the remaining Hormagaunts backed up by the Nephropid [my CC Tervigon], but with the last three Termagants killed by Paul's Flyrant it now smells fresh meat for it's own digestion pits. 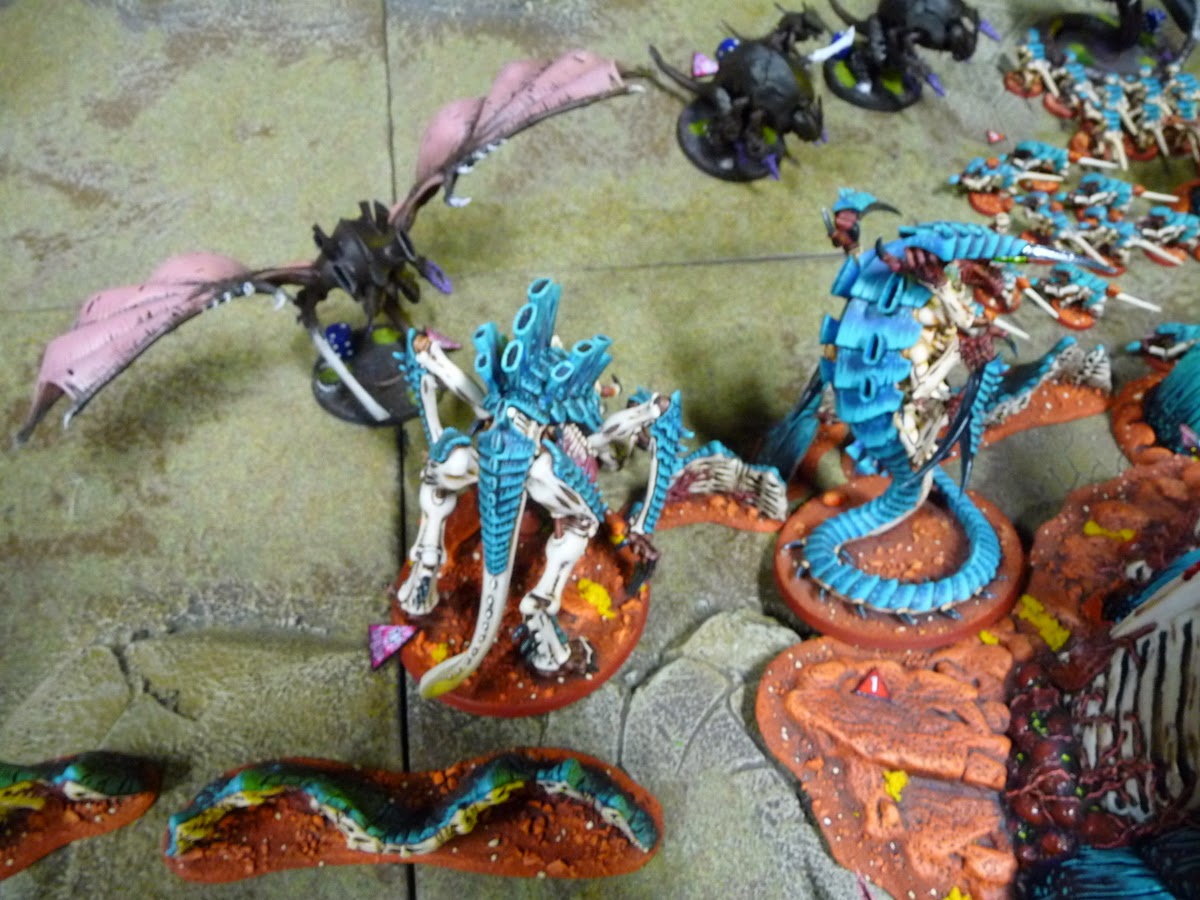 The Crone arrives, although I'm not sure what affect it had on the game at this point. At some point the three remaining Genestealers break cover from the ruin and will join forces to break the deadlock between the Trygon and the Termagants, otherwise they'd have been at it all day. Instead the Stealers scythe through the already engaged gaunts. I cast Paroxysm on them to try and prevent it but the end result was inevitable. 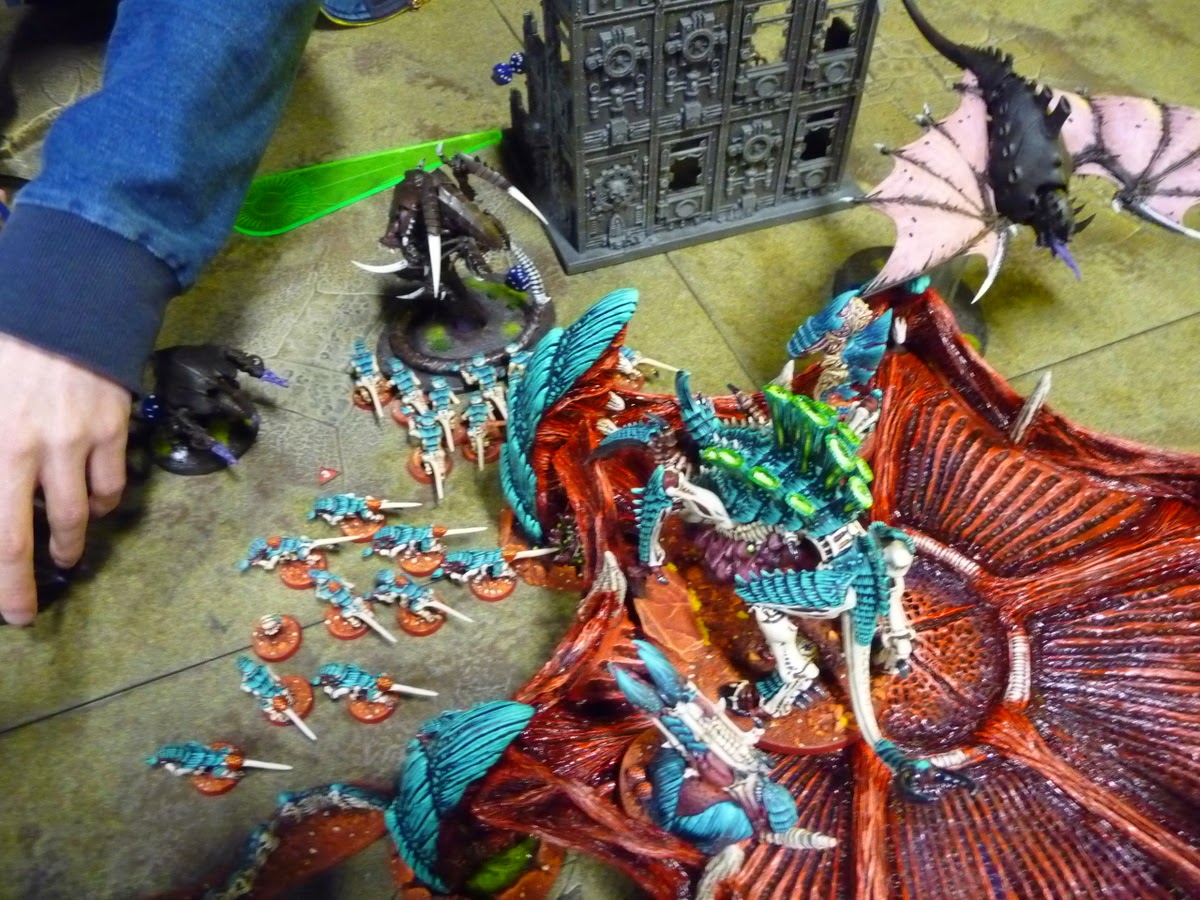 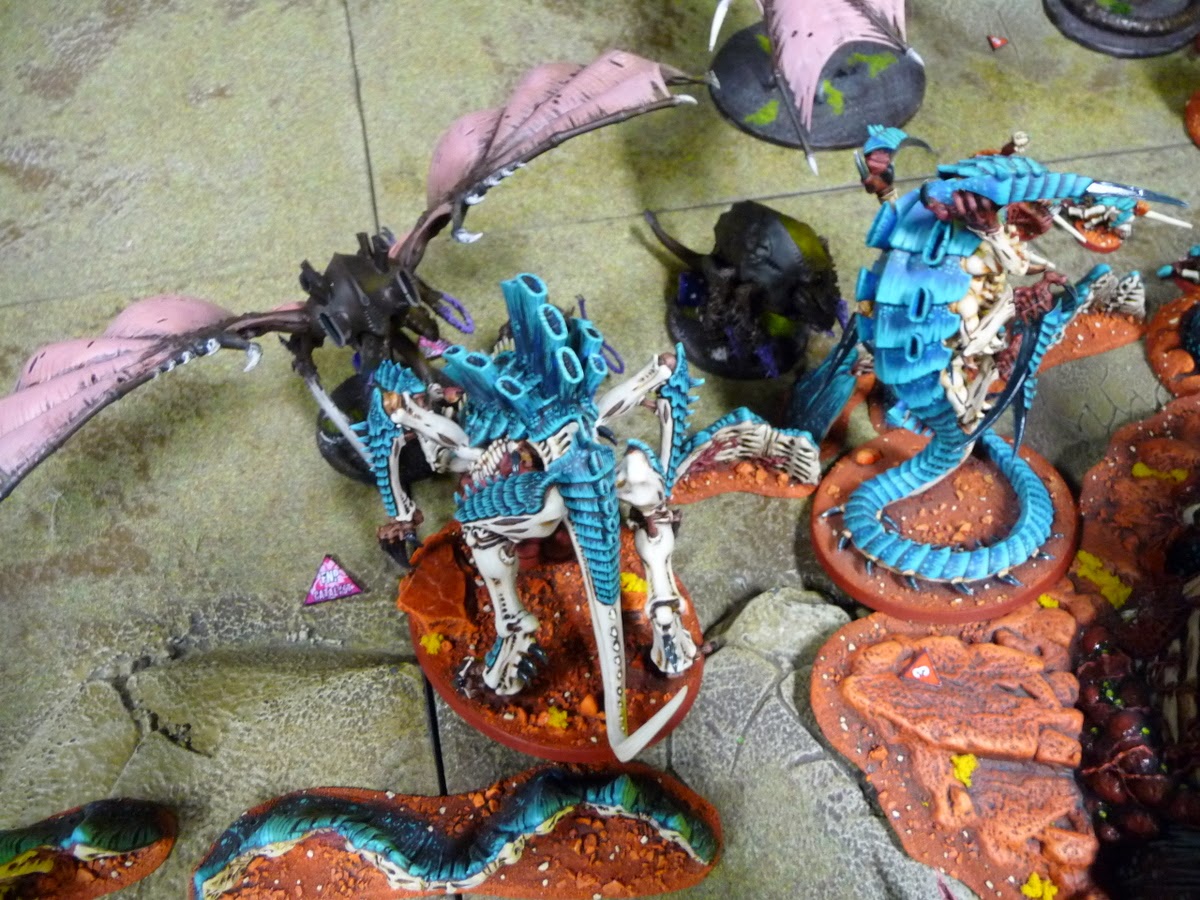 One of the Boneswords manages to cut the Tervigon and insta-kills it despite Catalyst - all 6 wounds gone in one shot - now that's a lesson learned. Paul's Flyrant is down to 1 wound though. The Trygon takes another couple of wounds and I back the Hive Guard off so they won't be next on the Flyrant's menu. I have a choice now as to taking out the Crone or the Hive Tyrant with the Quad Gun. At this stage I have the Relic and fear the loss of the Termagants holding it  so choose the easier option and target the Crone and kill it. This was probably the wrong choice with hindsight. The Tyrant has only two wounds and would have given me a VP, the Crone could right turn and take out the Trygon perhaps but who knows... 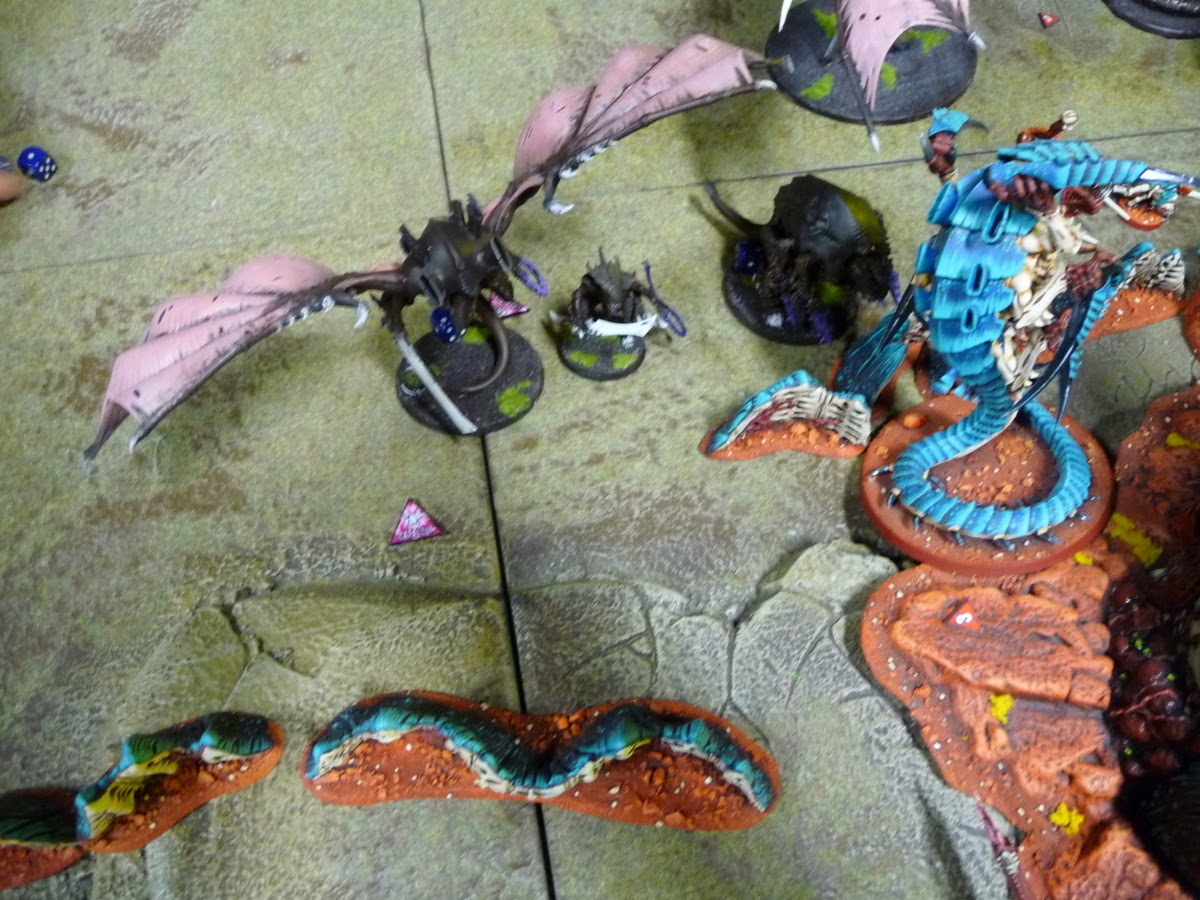 But I suddenly realise I made a grave error. Having shot at the Flyrant and failed to get it's last wound I've only got two or three Termagants securing the Relic and nothing stopping this double team from chomping them up. So I gamble on a 9" charge through difficult terrain hoping they might just make it and hold them up. Meanwhile my Trygon kills the last Carnifex and consolidate an inch or two [typically!] 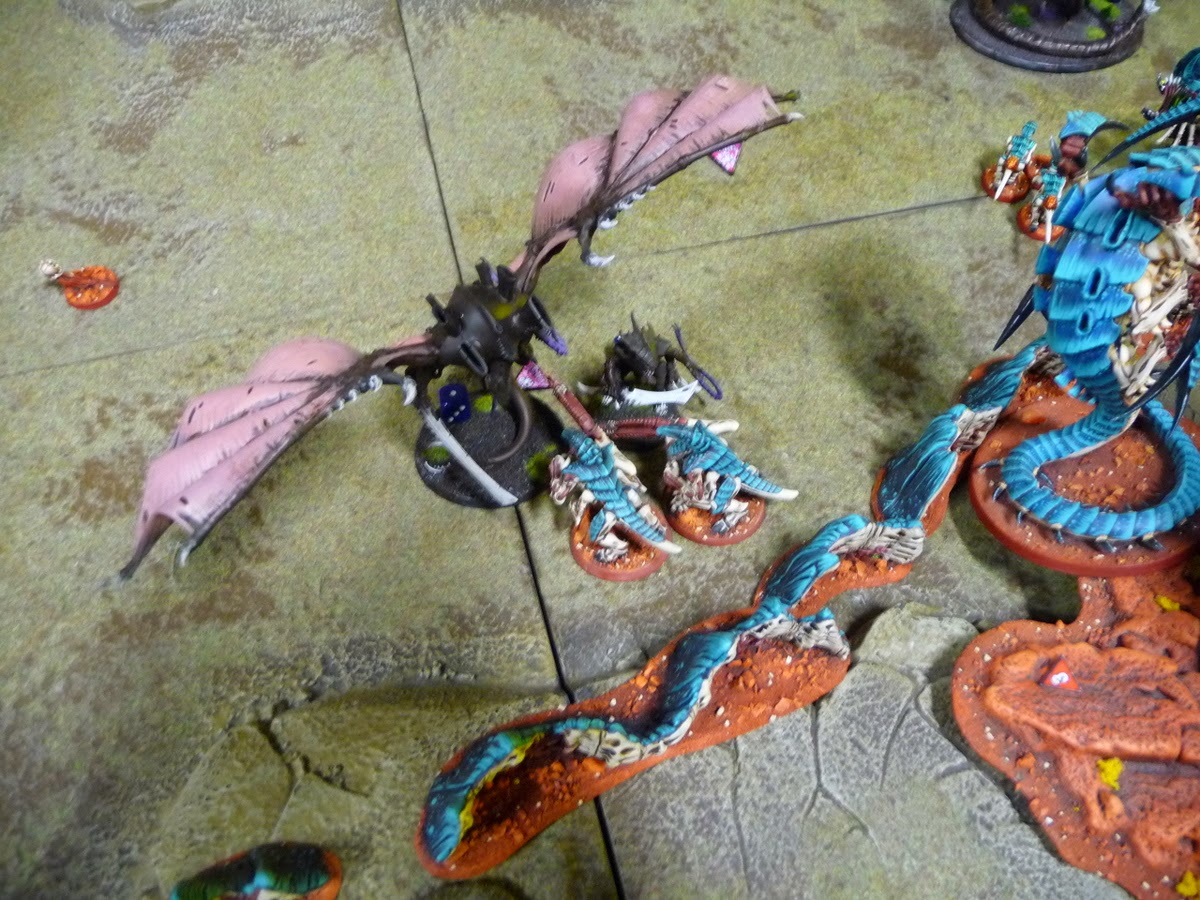 The Great Maw finally makes it off the Skyshield but has taken 3 wounds in the process. Paul's Trygon still has 5 wounds remaining and the Stealers have scuttled off underneath the Skyshield, presumably heading for Line Breaker. 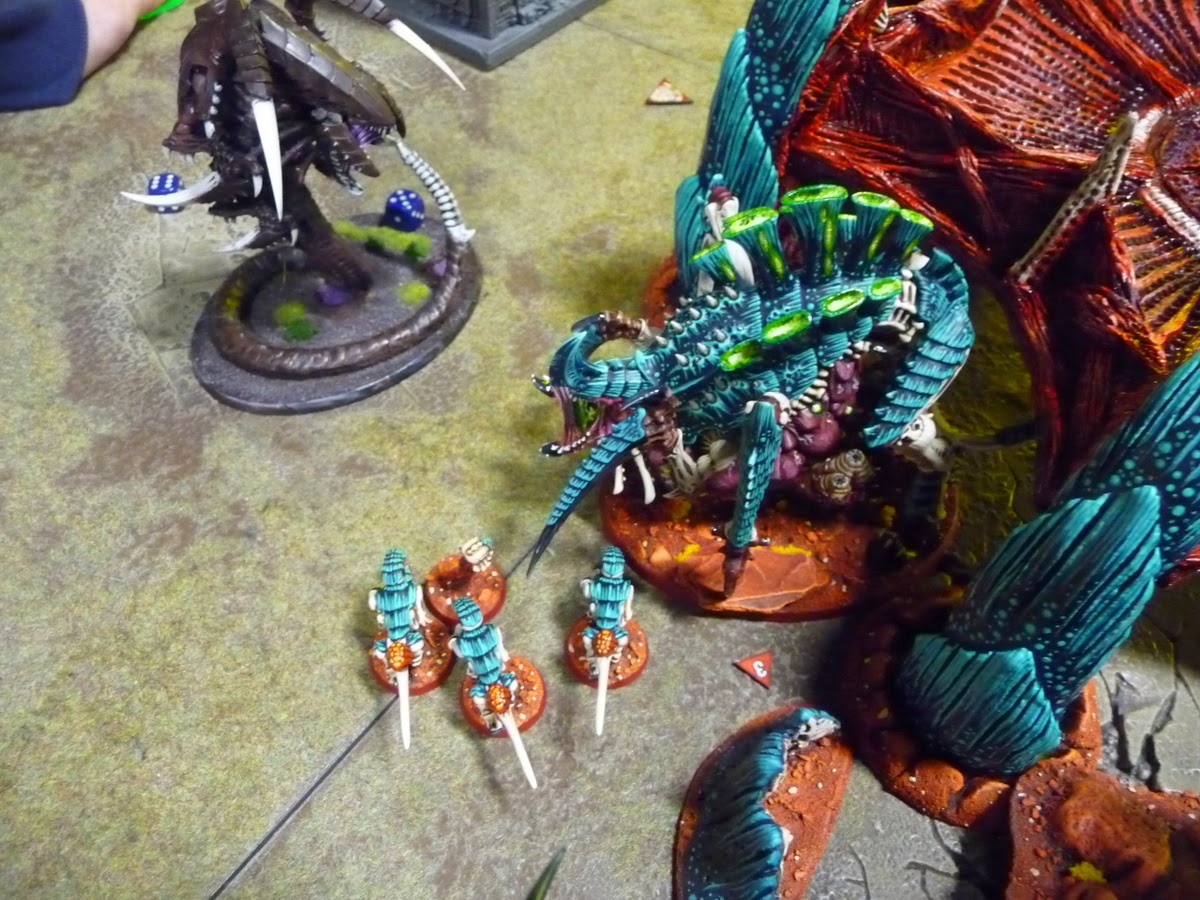 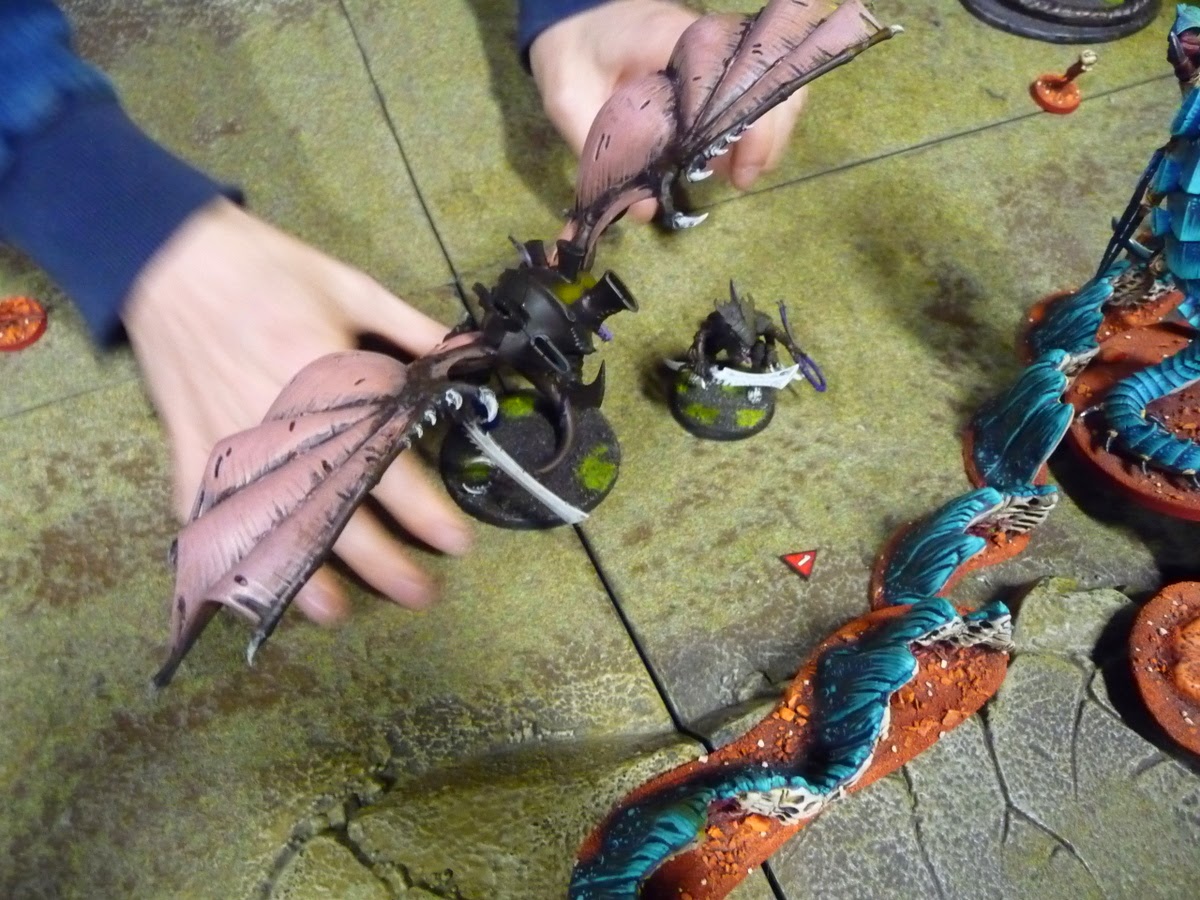 I think the Tervigon falls to the Trygon and presumably takes out the Termagants too. Neither of us have troop choices left to pick up the Relic so I have to kill the Genestealers heading for Linebreaker.. 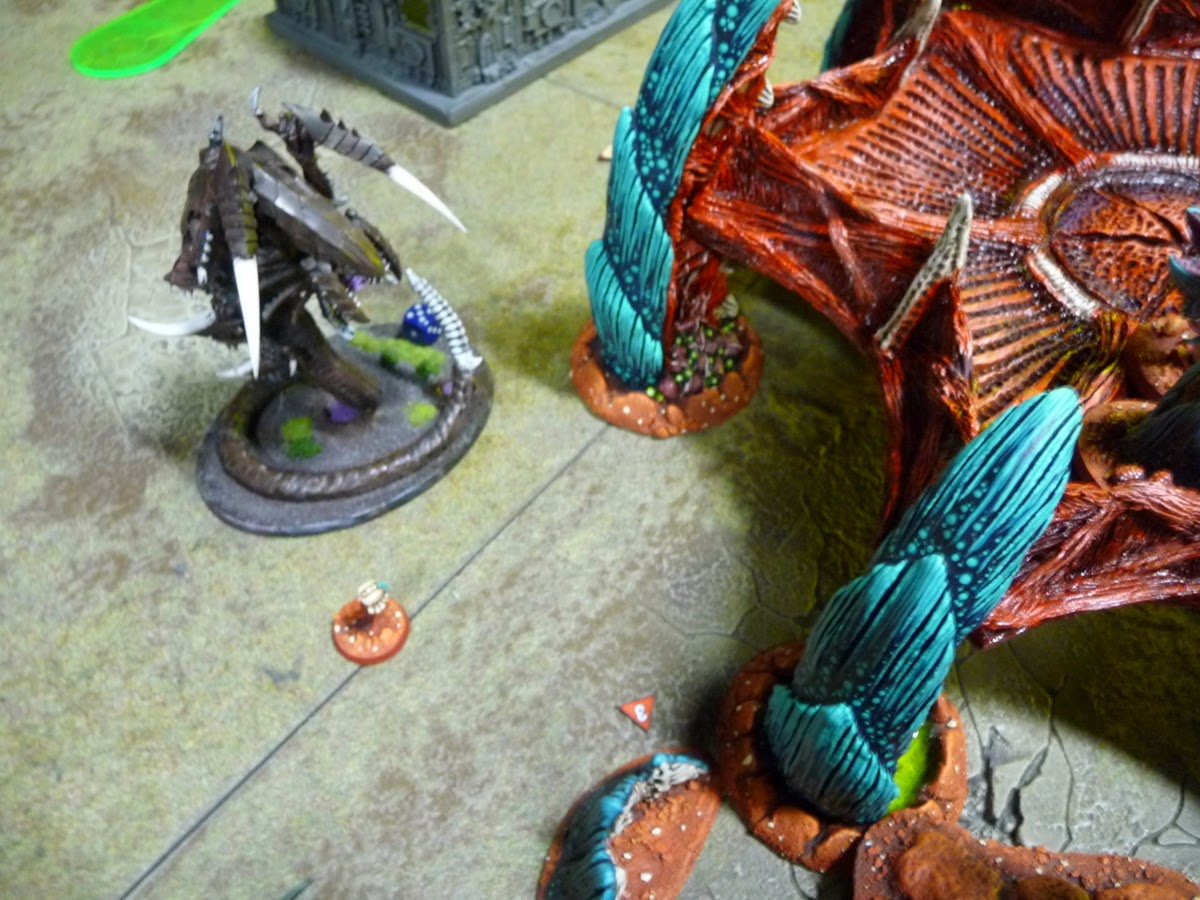 I move the Trygon towards it's Prime counter part, decamp the Biovore from the Bastion and continue to shoot Quad Gun with the Zoanthrope. The Tyranid Prime takes a wound from the automated Heavy bio-bolters on the Bastion. 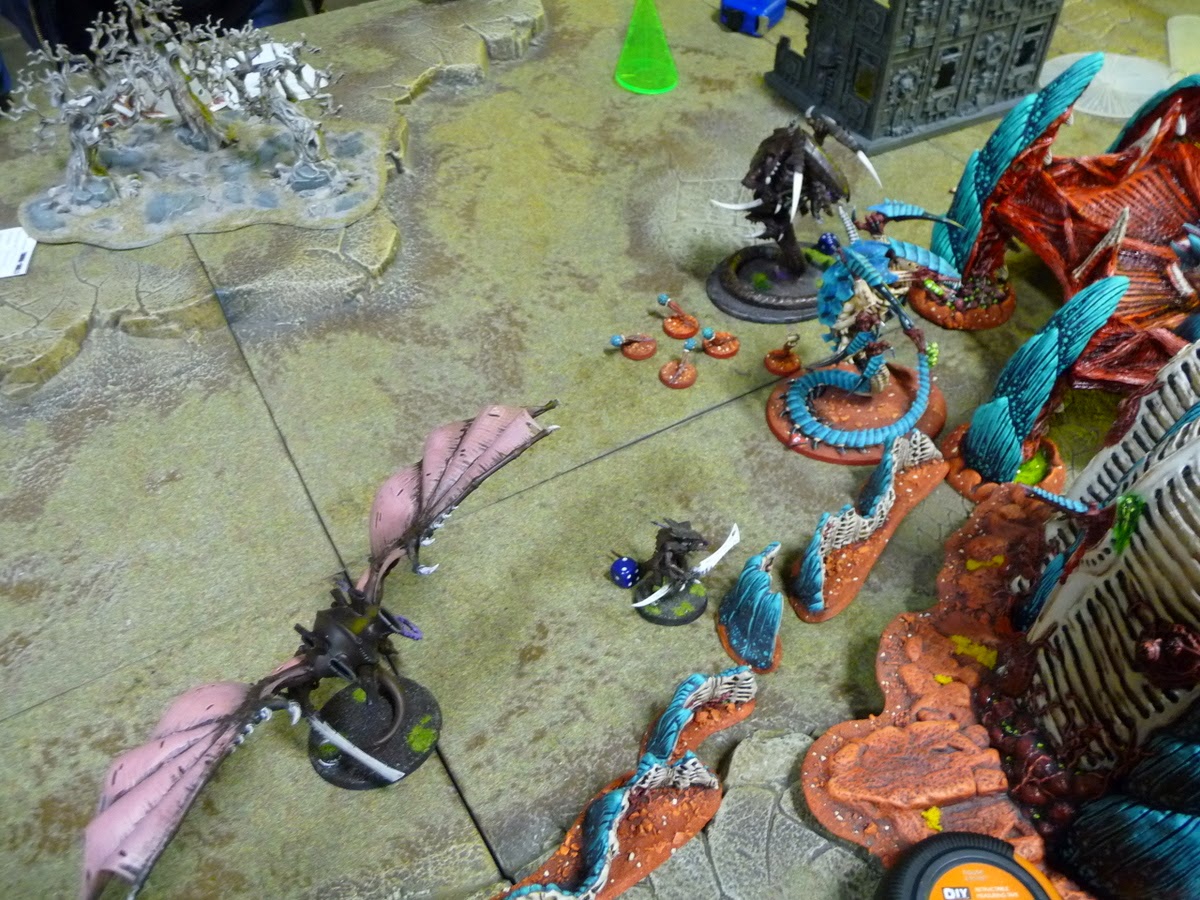 The Biovore manages to miss completely the Zoie fizzles out and the Trygon stoops underneath the Skyshield , takes aim and hits three times on the three Genestealers. I wound... twice leaving one lone stealer who naturally passes his morale check. 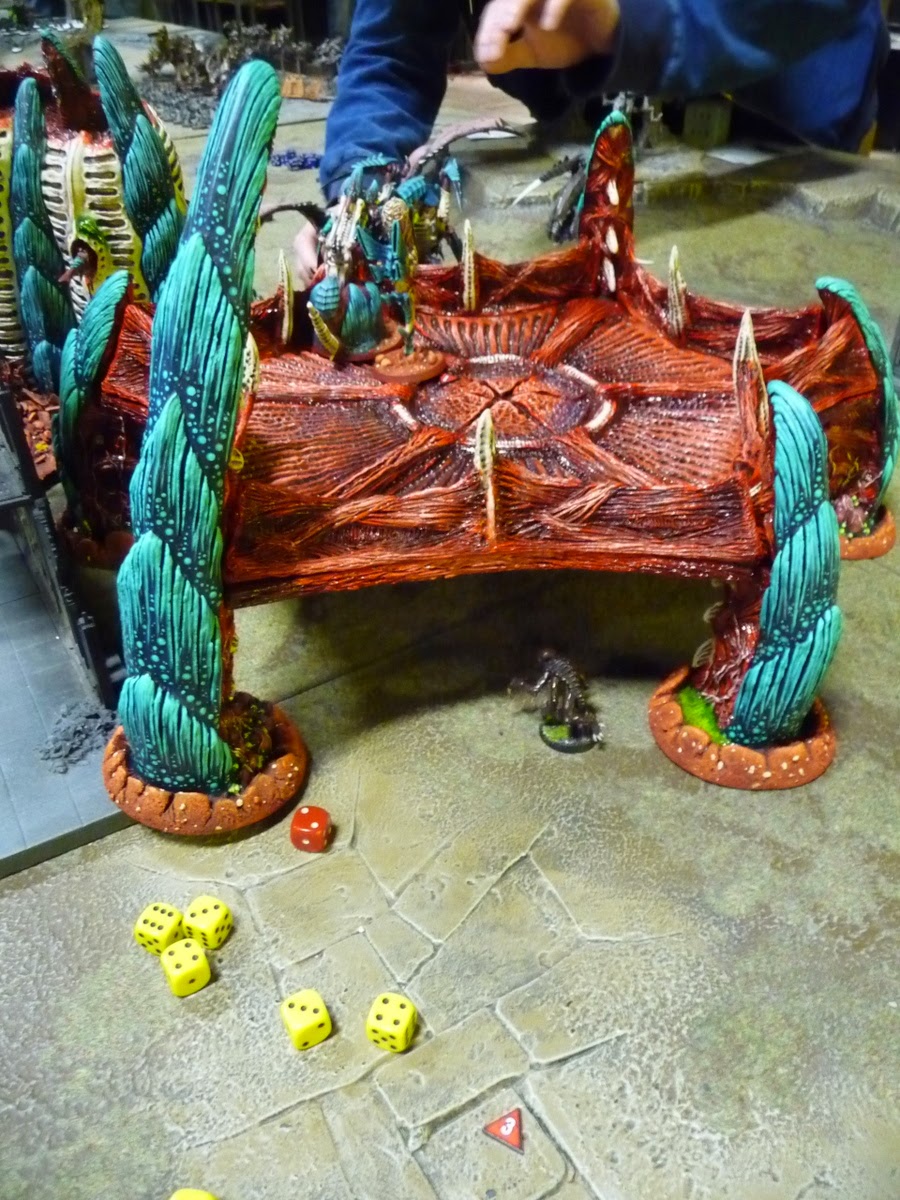 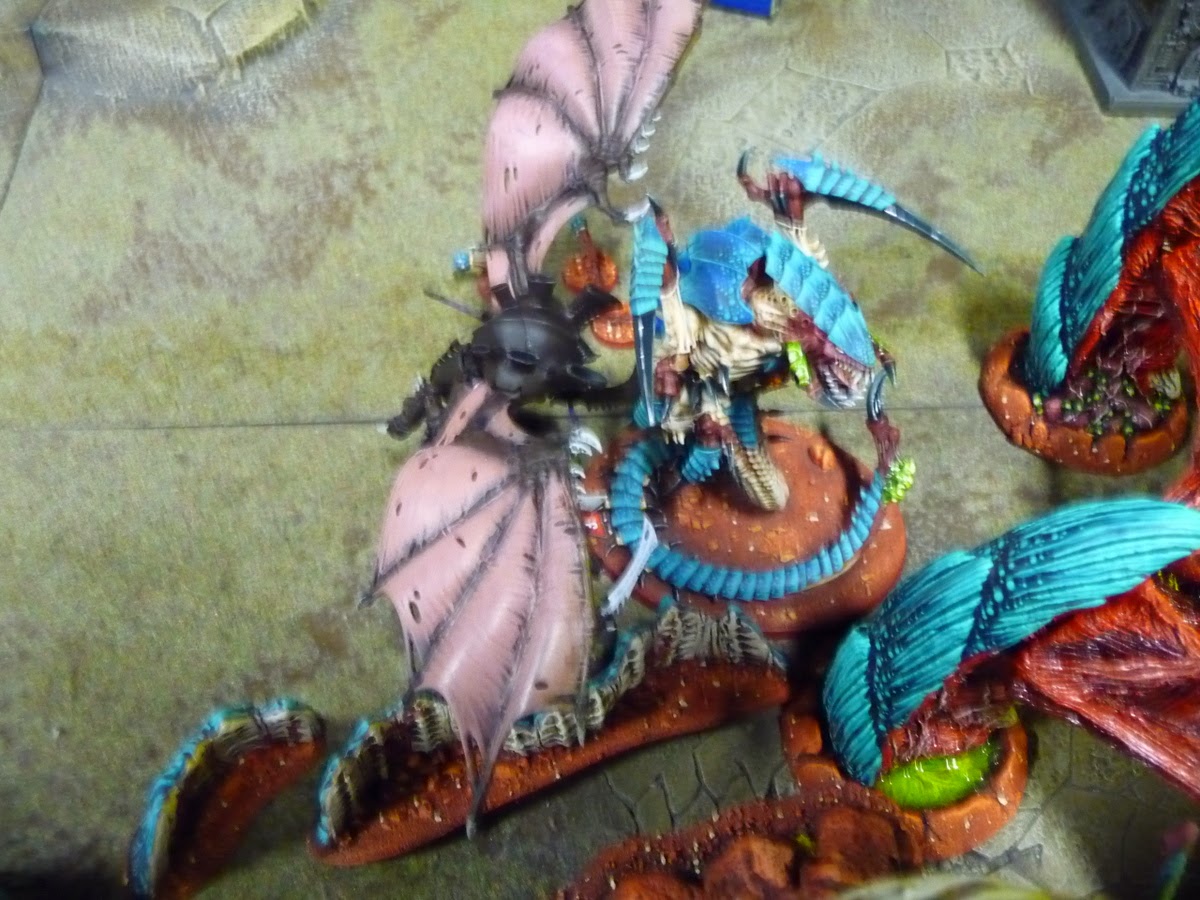 and continues to ram home just how good Boneswords can be and literally 'dices' him up with 5 wounds. 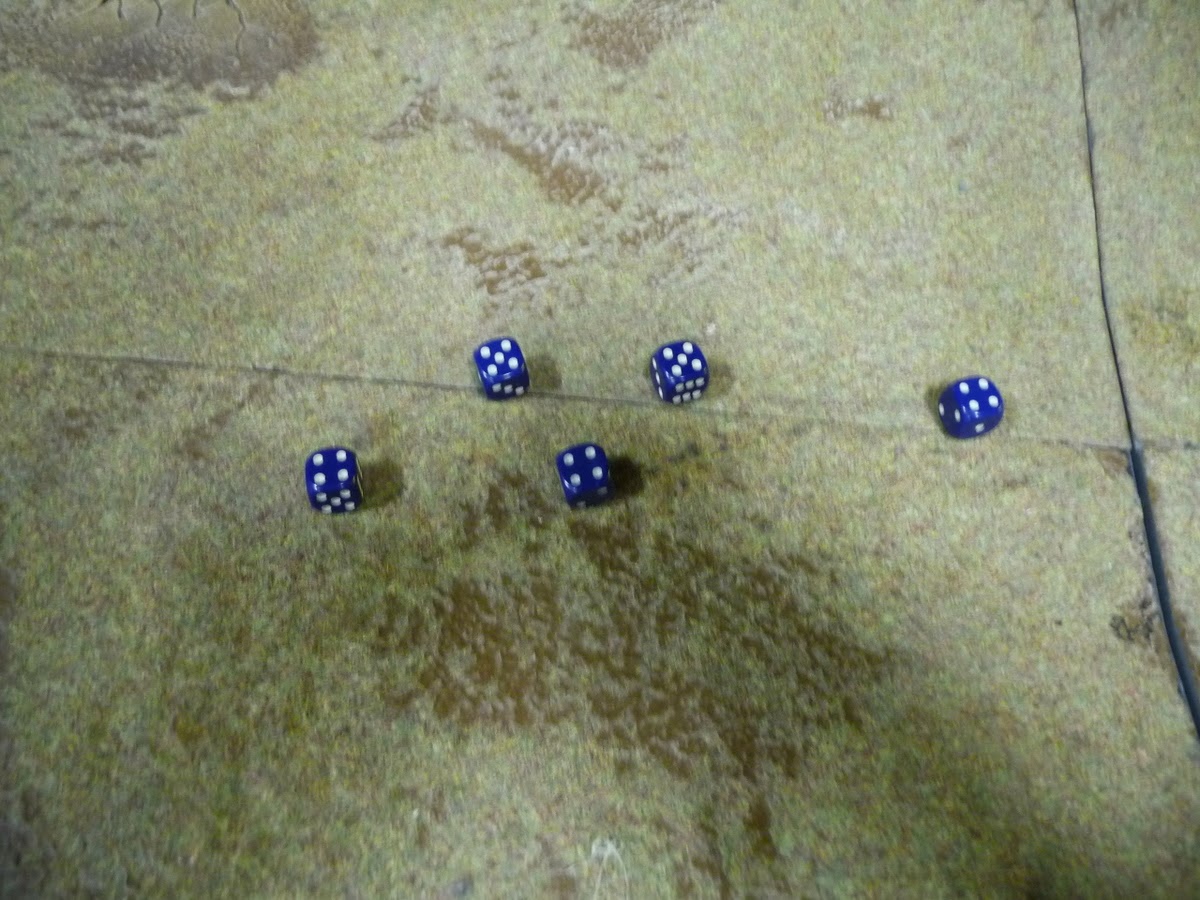 The Trygon dies and I can't kill the last Genestealer who makes it into my Deployment Zone giving Paul Linebreaker and the win 2:1 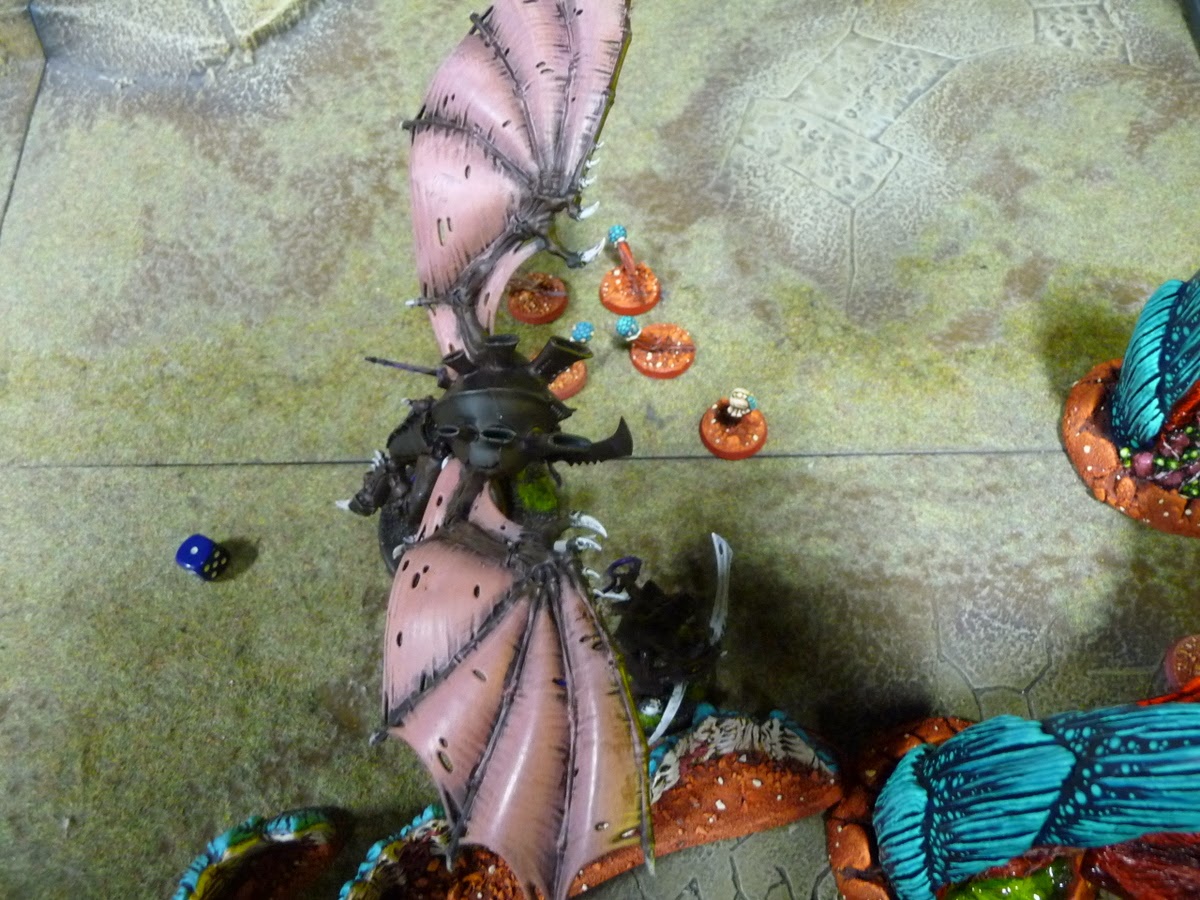 This was a close battle but I think I threw it away. I had the Fortifications to weather the storm indefinitely but couldn't get my target priority right. I was desperately unlucky trying to kill off that last Genestealer, serves me right for leaving the unit intact with 3 left and heading for bigger prey. However, there were more pressing threats so what can you do? Probably the biggest blunder was assaulting the Dakka-fexes but they're going to chew through a swooping Flyrant in the air anyway so overwatch is no different. Credit where it's due though the Flyrant and Prime duo were brutal, they sliced through 770pts between the two of them - just short of half my army killed by two models! I guess I'll have to look into the Prime a little more even with his stupid price.

Anyway, onwards and upwards. I don't think I've ever won my first game at Throne of Skulls so this was no different but I came very close [although the same could be said for my first game last time, lost only because I didn't realise the Storm Raven next to my Tervigon contesting my objective was hovering and therefore could be assaulted and probably would have been destroyed, what with Crushing Claw Smash attacks, and regained the objective for a win] and will learn as I always do. On to game 2, what will it bring?
Posted by 40kaddict at 12:17