When it became apparent that Hive Fleet Gorgon had managed to create a foothold in the more remote parts of Ferron Proxima there was little the Planetary Defence Force could do by that stage. The alien intelligence had gambled on citing their incursion in some of the more desolate wildernesses so as to avoid detection, the gamble being the lack of bio-mass available to fuel the breakout from their planet fall. However, in time the brood nest was able to use hastily formed digestion pits to reclaim what vegetation and local fauna resided in those areas and with this recovered bio-mass they were able to evolve their 'Proto-Tervigons' into their natural state. 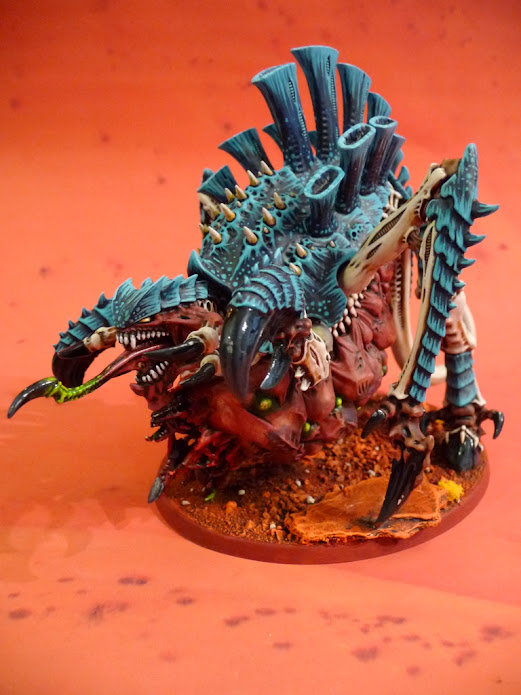 Aside from the increase in size there was little difference to their earlier counterparts, although some would say they possess a visage many times more frightening than their forebears. Unfortunately those that did voice such thoughts were soon removed from the populace by the local Inquisition or summarily executed by their PDF Commissars. What did hold true between the two strains was their ability to spawn Termagants. Often they would projectile birth them ahead of their charge, using them as a shield, to fearlessly engage the PDF before their brood mother slammed into the preoccupied Ferrons. The only respite the PDF could discern was once again due to their limited stocks of bio-mass as often the beasts spawned would number just a dozen although very occasionally it could be many dozen! 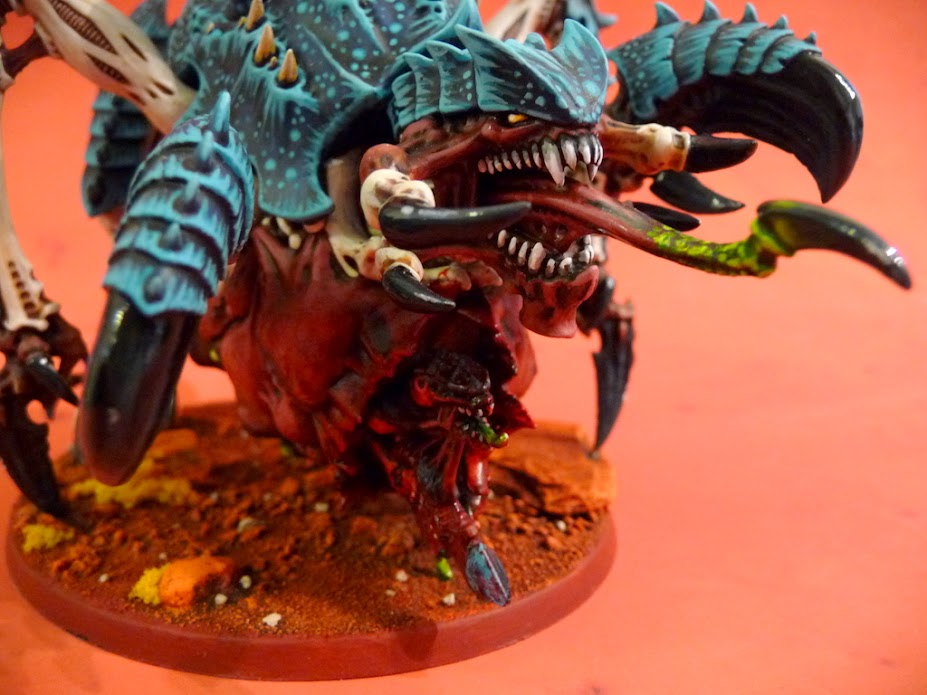 As the encounters increased Bio-magi continued to record all reports of the nature of this new Xenos threat. Tervigons were a whole new genus they were rapidly having to come to terms with to draw solutions up for their eradication or at the least containment until the arrival of support from the Adeptus Astartes. It soon became apparent that the creatures had some form of psychic abilities. Initially those skills allowed them to force their progeny to greater feats of endurance or allowing them to control the weaker minded beasts from further distances whilst they stayed in the rear. However at some indeterminate point something changed, whether it be the natural absorption of the Wraithbone shards scattered across the surface of Ferron Proxima or some alien signal that evolved the psychic ability of the creatures following the arrival of the Dark Angel relief force in their battle barge 'Dark Vengeance' no one knows. 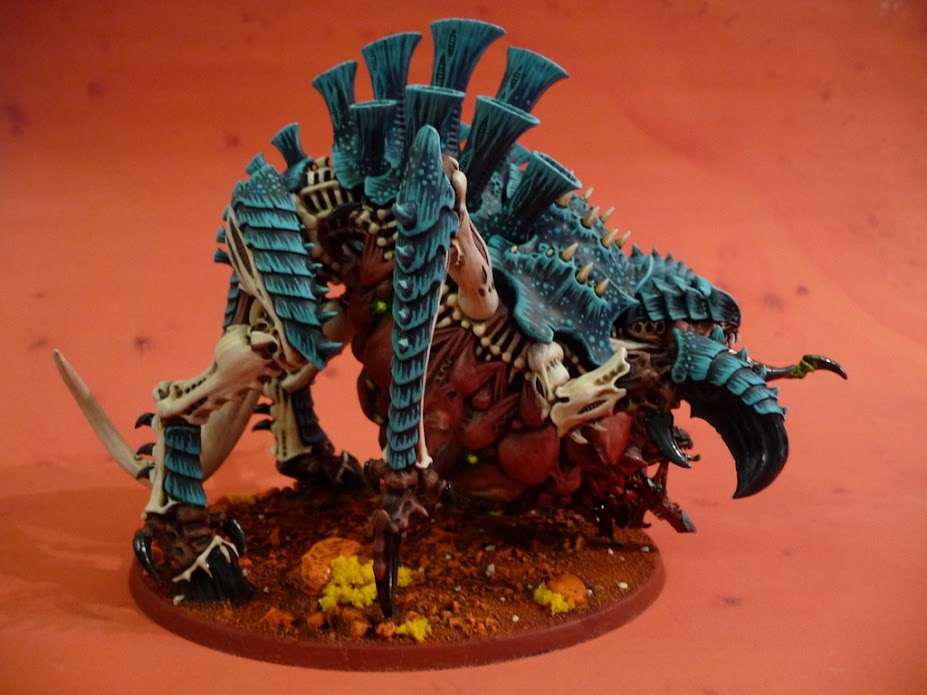 The result though was that suddenly the Tervigons were performing much more varied elements of witchcraft, invariably making them stronger and tougher or giving them the ability to move faster than the eye could see and faster than anything of that size should be able to in nature. Additionally these skills allowed them to be more aggressive, leading from the front and using further skills to weaken the forces arrayed against them, or making their progeny even more durable in the face of oncoming fire. Regardless, it soon became apparent that even the most devastating of creatures the Great Devourer could bring to the battlefields - Trygons and Mawlocs could be pale shadows of what an enraged Tervigon could be. They were seen to tear large tanks apart with ease, smashing Bastions and whole formations asunder with their giant crushing claws or scything talons. 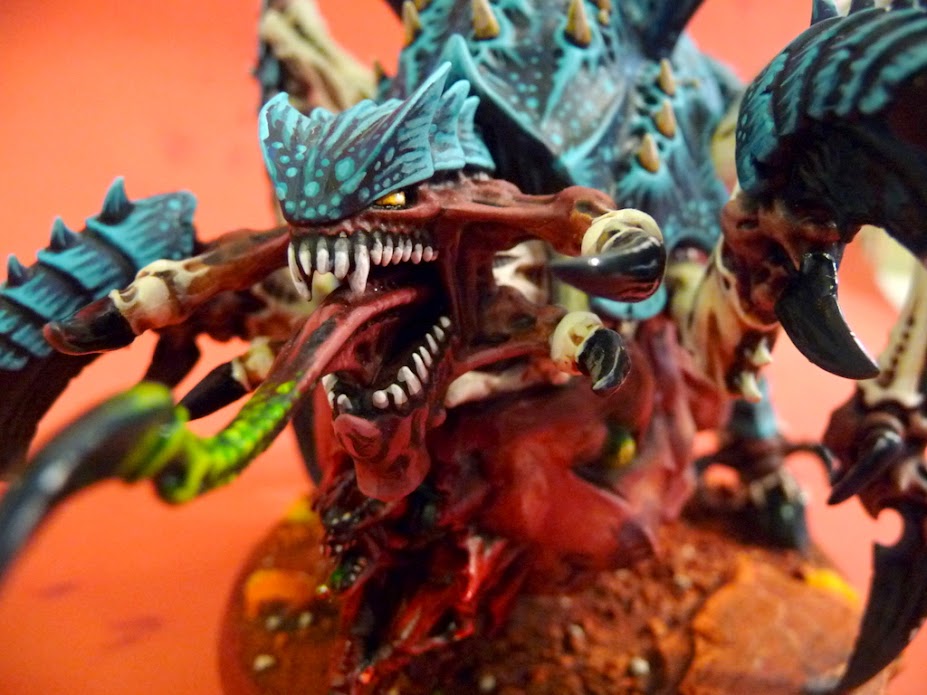 Currently the Tervigons are being kept in check through the efforts of the Dark Angels, disallowing them access to further biomass to increase their numbers.One side effect of this 'containment exercise' recently noted is that their extreme levels of psychic ability has decreased. Whatever obscene catalysing agent that had produced such monstrous powers seems to have been used up. The beasts are still powerful but in no way can they perform the feats of psychic mastery that allowed them to secure a foothold on Ferron soil. Not only that but their spawning behaviour seems to have altered, no longer are they able to spawn with such ferocity, their progeny bursting forth with wild abandon. Instead the alien filth are deposited like mewling newborn infants, weak and decrepit, blinking in the harsh daylight as they try to ascertain why they have been brought into existence. It is advised that anyone facing such an abominable birthing should utilise this moment of confusion to destroy the alien scum. 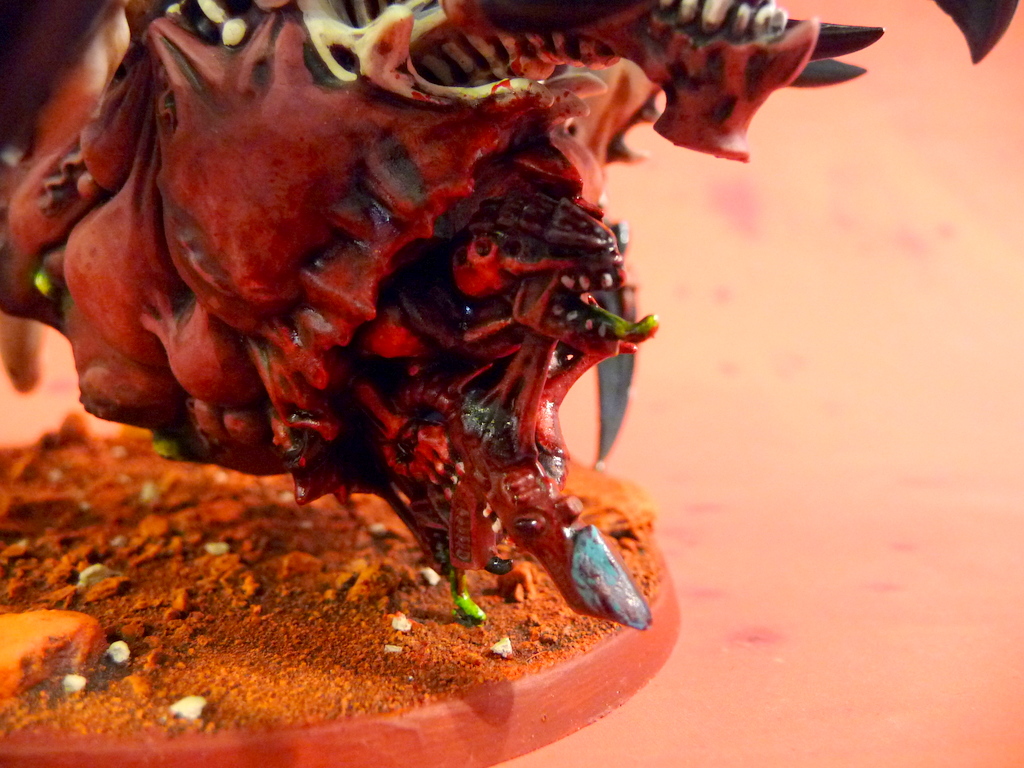 One bio-magi has suggested that it is Ferron Proxima itself that is fighting back, that it is allergic to the Tyranid presence and thus weakening the bioforms much as the planet is anathema to the Ork threat. Although there was historical evidence that certain have genome sequences that can match up with the Catachan Devil it has since been shown to match more closely with the Ymgarl Mutation but with differences that make the instability of the mutation more harmful to the Tyranid genetic make up than beneficial. It certainly might explain the recent discovery that although the Tervigon as primogenitor spawns the Termagaunts and was able to pass on certain genetic improvements new evidence suggest it no longer imparts any such advantage. In fact the Tervigon is now a mere incubator, or surrogate for some other, unknown brood mother. 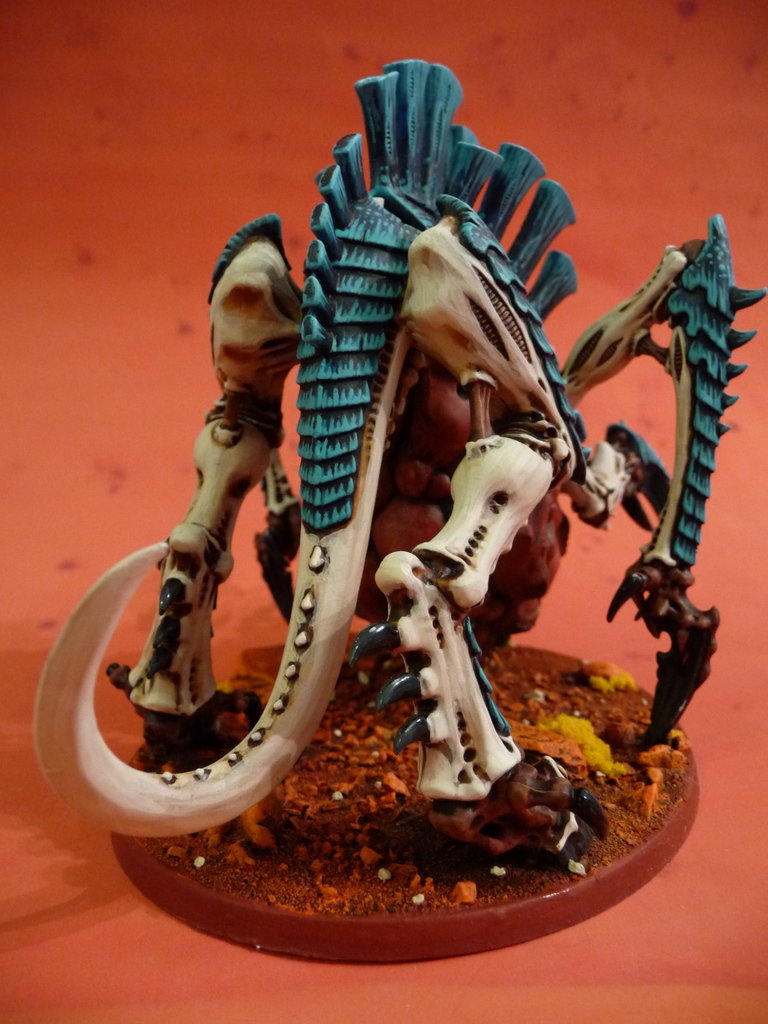 The question remains is the unstable mutated Ymgarl genome in Ferron flora why the Tyranid threat has been stalled so abrubtly? Is this why their rapid expansion and overwhelming brute strength has been replaced by weakened genetic stock, only time will tell.

Email ThisBlogThis!Share to TwitterShare to FacebookShare to Pinterest
Labels: tervigon