I got chance  to have a game with my mate Liam, he of the scratch built Warhound and Warlord fame. Since last we fought he's been busy as a bee in painting his Chaos Space Marines and they're nearly all done by the looks of it. The only real painting to be done on all the cultists and finishing off his suitably chaotic Aegis Defence Line. If you're all good I'll post some of my character pics of his army later on, the lighting isn't great but they're betetr shots than the in game ones.

Hammer and Anvil with 5 objectives as per the MAWS scenarios. Liam had three and I had two and he placed his in the 'triangle of doom' formation behind his Aegis Defence Line. I tried to position all my troops out of view, with the Hive Guard hiding in the ruins on the left with the Troop Tervigon and the Warriors holding the objective in my back field. Lastly the Devgaunts manned my defence walls. 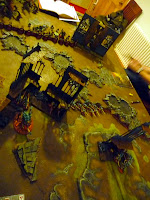 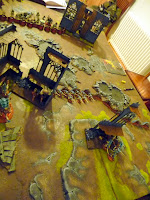 Despite my setup to ensure my figures were hidden I forgot that Liam would actually get the opportunity to move his figures in his turn DOH! so he repostitioned his Defilers [Brass Scorpions] and took some shots, along with his Obliterators in the ruin, mainly at the Troop Tervigon. 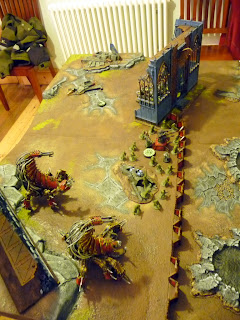 The blasts managed to put 2 wounds on the Tervigon and kills one Hive Guard and wounds another in the second Brood. It was a bad beginning, but it could have been much worse. 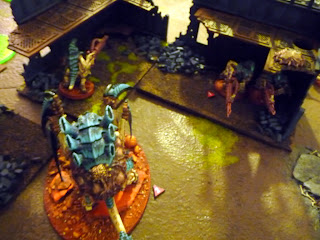 The Tervgion becomes Endured and spawns 12 Termagants to secure the objective on the first floor. 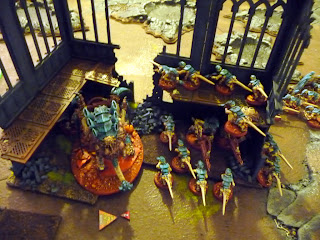 Nothing much happens. at least I guess not much happened as I didn't take any pics until my turn two and my outflanking Tervigon come on behind the ruined building along with the Toxin Stealers. 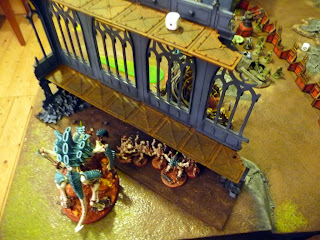 The Trygon Deepstrikes alongside the Defiler and the Spore Pod and Doom deviate 11" backwards but the Doom can still get in range of the Marine Squad holding the objective in the ruins with Kharn. 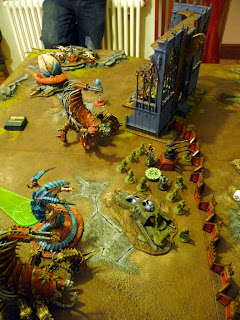 The Adrenal Stealers also arrive and manage to make cover and hope the Doom becomes more of a target allowing them to get into combat next turn. I think the spore Pod took a wound for landing in some debris, obviously! 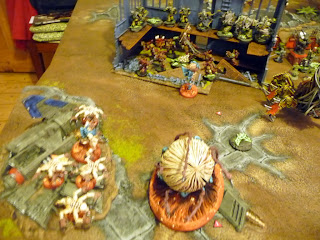 Not sure what else was happeing here but you can see I've still got a lot of cultists to get through to get that objective next to the Quad Gun. 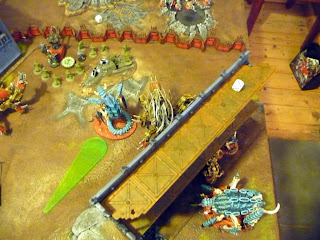 The Troop Tervigon is on 3 wounds and spawns out on 10 more gaunts who head for Chaos Deployment Zone. The Devgaunts push forwards too, hoping that ll the back field drama of Spore Pods, Dooms, Stealers and Trygons will allow them the chance to cover the dead ground so they can actually have an impact on the game. Meanwhile the Heldrake make's it's presence felt. 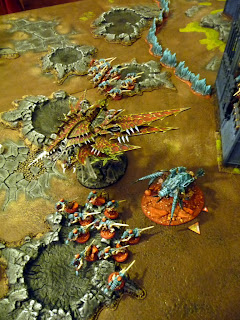 Back in the ruins the Hive guard suffer another wound. 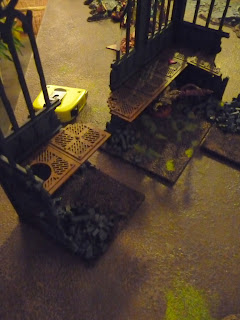 The Doom is on 8 wounds and everything turns to kill him. To a certain extent I didn't judge just how useful he would be in this situation. His 6" leeching power is usually nullified by people moving out of range but if I'm putting him near an objective then that forces people away from it or forces people to risk being killed by staying near it. 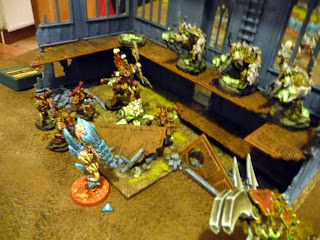 Sadly twin linked melta fire from the Obliterators caused 3 wounds and typically 1 failed save insta-killed him regardless of those lovely wounds. So it was disappointing for him to only be in the game for one full turn. If I'd not been so unlucky, though technically those 1 in 3 odds were borne out correctly, he'd have caused no amount of trouble around that objective. 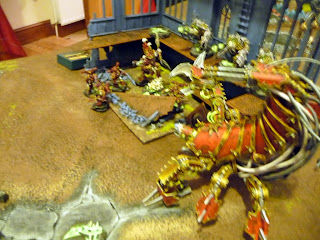 As it was the Tyrgon was attacked by the Defiler, it's tentacle things reducing the Trygon's weapon skill but thanks to double Scything Talons I managed to get three penetrating hits on it. 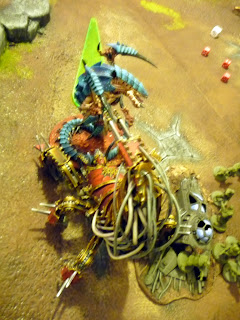 Unfortunately it gets a 5+ save regardless and Liam rolled Yahtzee, colour me less than impressed at this point, although Liam was very giddy. 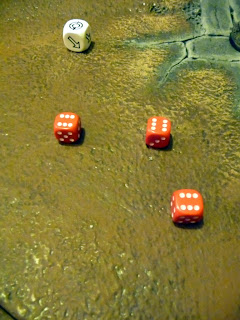 The HQ Tervigon spawned and then charged the Defiler, but not before it finished off the Trygon. For some reason I kept the stealers back which was a mistake as even a couple of glancing hits would have helped. 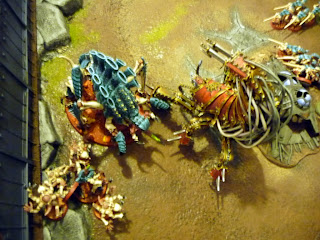 The HQ spawned gaunts head for the cultists by the end of the assault there are but three left and the cultists are down to 7 and their Lord. 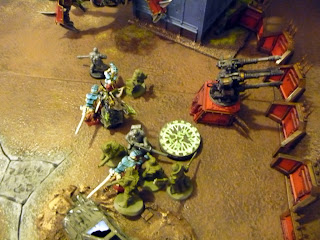 The Broodlord takes on Kharn having assaulted through cover he's slaughtered without even getting a chance to fight back. 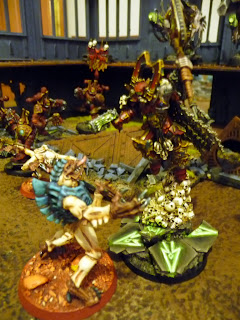 The HQ Tervigon smashed the Defiler to pieces and in return the Heldrake repositioned and flamed it and the genestealers and leaving the Toxin Broodlord with 2 wounds left. 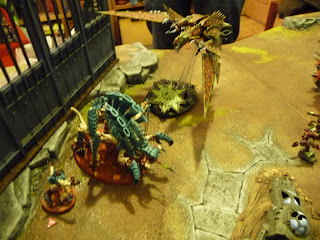 The HQ Spawned gaunts are killed by the cultists but the Devgaunts make it into assault. I think I tried to get both Tervigons and the other gaunts in as well but only 1 assault succeeded and therefore the Devgaunts were reduced to three also. Meanwhile the HQ Tervigon is on 2 wounds. 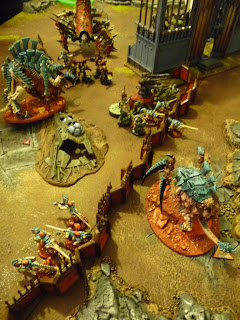 Kharn smashes the face of the HQ Tervigon and my only hope at this point is to pull the cultists off the Quad Gun objective or smash them with the Troop Tervigon but yet again he fails to make it. 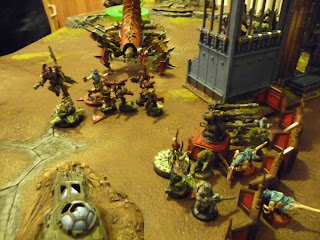 This was another late night finish and I'm not sure what happened after this, I was tired and stopped taking pics. I appreciate that's a less than satisfactory Battle Report but I'm struggling with these at the moment as they do take a while to write and that immediately reduces my motivation to do them.

Overall this the most fun I've had gaming with Liam, it's only been the third time we've battled since we hooked up again so it's still very much renewing our friendship. The fact I lost again isn't important, but doing so with laughs and painful dice rolls that tip the balance one way or another is.

I have to say though that having the HQ Tervigon outflank was the best thing that could have happened, without it the game would have been considerably less interesting so I will look to using the similar Hive Tyrant ability that you can Outflank a troop.