This is me and Mat Garside [Stockport GW manager] during my first game. 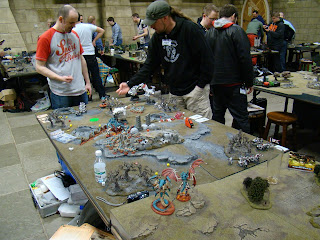 So, back from Throne of Skulls and I'll try to start writing up the battle reports but given I won 4 and lost 1 in October I was not expecting to do as well this time and I did not disappoint with 2 loses, 2 draws and one win but those headlines obviously do not tell the whole tale. I did however get nominated for best army again and also won 'Monument of Legend' [best fortification] for my Tyranid Aegis Defence Line :)

My mate Otty once again won 'The Scribe's Quill' for best army list [beating Liam's Chaos Marine helmet! So you know it must be good]. Liam won Beast of Legend, Best Vehicle, Favourite Player and was nominated for best army and Ben won all his games with Necrons becoming the most successful player amongst us. Not bad going really.

Anyway, if you want to check out the facebook album full of 248 photos of the event please check it out here: