Here's the first of my MAWS tournament matches. This was a four-way tournament between my local friendly neighbourhood Gaming club - The Lost Boys against The Ribble Warriors, Northern Warlords, and our hosts the Manchester Area Wargames Society [or MAWS]. There were three battles of 1600pts with a time limit of 2 hours, sadly this meant I was pressed for time, you know me, so pictures are sparse given the need to actually play. Also it's been a week so memory may be sketchy in places. First up was my battle with Chris Green [I think] with his Chaos Marines.

As you can see here's my setup and I think I may have stolen the initiative too. Devgaunts hiding in ruins with Warriors and a couple of Hive Guard. Stealers pushed forwards [perhaps too exposed?]. Further pictures indicate that at least one of the Rhino's is gone so I'm guessing the Hive Guard on the left did their job and shot one down for First Blood. 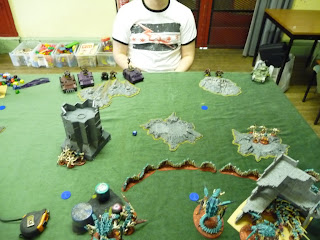 The disembarked Noise Marines had buffs for their Sonic Weapons and managed to shoot the pants off the Toxin Stealers, leaving the Broodlord with two remaining wounds. While their Adrenal counterparts stayed in their crater and were promptly ignored. The right Hive guard must have got a Penetrating hit on their nearest Rhino - immobilising it. 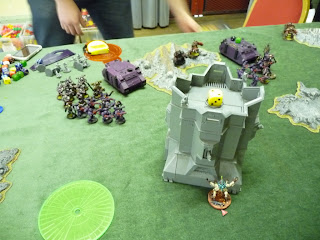 Everything bundled forwards, the HQ Tervigon had taken 2 wounds as well it also spawned out of gaunts on turn one with only 4! While the Troop Tervigon spawned 14. 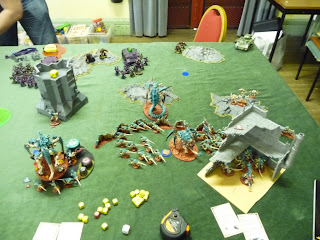 Devgaunts, spawned gaunts and Stealers took a beating and the Troop Tervigon also suffered a wound. 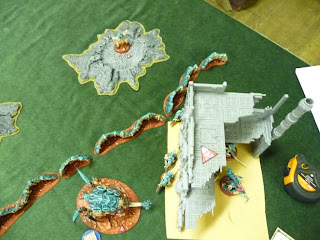 The rather stunty winged Heldrake managed to be rather effective toasting most of them with his Baleflamer. The lack of Trygon in this shot suggests he also fell to massed Obliterator, Noise Marine and Predator fire. 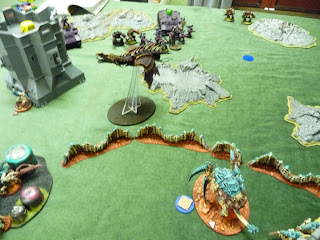 Throwing caution to the wind the Toxin Stealer went for the Noise Marines. Fair Play to Chris he actually accepted the challenge to his Warlord. Unfortunately we decided I would not get to cast Hypnotic Gaze on him as a quick look at the rules and instant interpretation Chris felt it would be cast on the model he assaulted into base contact with, not the one he ended up challenging. For the sake of expediency I agreed but it's a 5th Edition rule before the 6th Edition Challenge mechanic. I'd argue you would be able to attempt it in a Challenge otherwise there's no point having the power at all. I'd still allow a Deny the Witch, regardless the ability was not needed as the Broodlord slaughtered the Chaos Warlord getting me another VP for Slay the Warlord [obviously]. 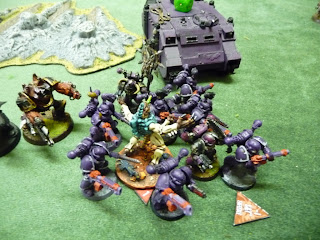 And here's the same Toxin Stealer later on - having also killed a Chaos Sorcerer in a Challenge and then wiping out most of the squad - what a beast! 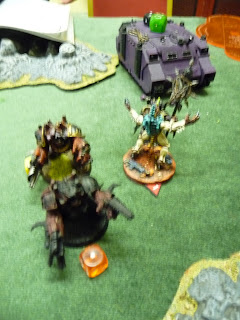 The Doom finally makes an appearance, sucks the life from a few marines and then promptly has to make one saving throw and unsurprisingly fails! Just over in the top left you may just make out three grey blurs - these are a squad of Chaos Cultists that came on in reserve and are capturing the other objective in Chris's Deployment Zone 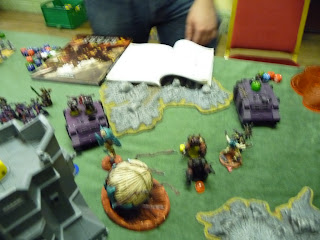 So we made it to turn 5 at least. I'm thinking perhaps that clear 'negative space' the Marines are encircling is where my HQ Tervigon once stood. 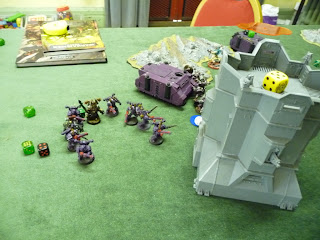 So the ﻿game came to a close and I was convinced I'd lost but having read the rules pack it was revealed objectives were only worth 1point each. I'm not entirely sure what was left holding my home objectives but the end result was a draw! I think Chris was actually holding 2 objectives, which in a normal game would have clinched it with Slay the Warlord but because I had both Slay the Warlord, First Blood and an objective it may have been 3VP each [I think my Toxin Broodlord was just out of Linebreaker range].

I felt a bit guilty at the end, because of this rule, Chris beat me quite comprehensively although once again Warriors did little, the Trygon was bested too soon and the Doom was just a distraction for a single turn. The Toxin Broodlord was a beast but the Adrenal Broodlord did nothing, I faffed about with him leading to his downfall. Anyway, a draw meant at least I wouldn't suffer a whitewash.