It's Throne of Skulls again this week and I better just catch you up on the Wingged Hive Tyrant. Much like the Tervigon for October I've kind of run out of time to showcase the mini before the event. i suppose I could sneak an extra post in but content [and motivation] is low at the moment so given the choice between chronology or no posts I'd rather have stuff out of order. Sorry for the downturn but it's just the ebb and flow of the hobby. Anway the Tyrant is complete but not without it's problems. I had to purchase another pot of Seraphim Sepia from GW and I was appalled at the end result, what you see below. While it was wet it acted like the previous Gryphonne Sepia wash and even my other pot of Seraphim Sepia. It pooled perfectly, however when I returned a few hours later everywhere it had pooled looked like some cheeky elves had sprinkled flour into the crevices and it had dried as a fine brown powder. You can see the odd 'cigarette burn' marks where I have brushed the dried crust away. In the deepest recesses it formed a scab like coating and was just plain awful. 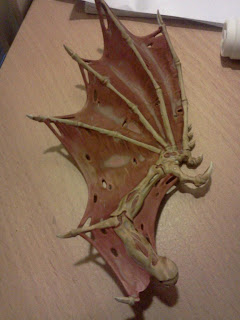 This HDR picture highlights the marks more thought the above picture is more representative of the end result. Apparently this is a known problem, some forums suggest the shade needs to be shaken vigorously to prevent this happening which I find disgraceful [although Purity Seal serves up a similar issue]. This is a flaw in the formula, with the washes if the mix wasn't 100% you were able to use the slightly thinned top layer of the wash for lighter shading effects and the bottom, where the darker ink had settled for darker areas. These shades no longer offer that option. Additionally the forums suggest it is a reaction to non GW paints, I can't comment on that. It's true these were washing non GW paints but I think the Tervigon, Ymgarls and a number of others were also washed with my previous Seraphim Sepia pot and didn't result in this abomination. 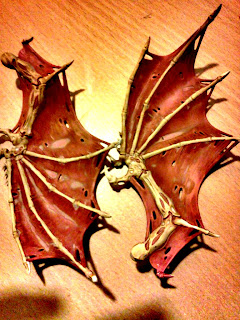 Although this picture seems little different to the above one it is after some application of my [Devlan Mud equivalent] Army Painter tone. It managed to fix the powder in some places but was not able to fix it in others, despite numerous coats. In fact it was in these areas where the powder began to crystallize into the crusty scab I mentioned earlier. 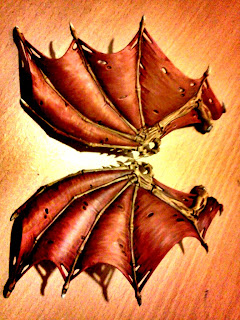 Sadly when I next returned to a GW and raised this issue with a staff member he wasn't even apologetic. I'm sorry but that product is not fit for purpose and if it screws up someone's expensive miniatures they should be damn well sorry and perhaps ask for it to be brought back in so they check if the formula was wrong. Anyway apparently Vallejo do a sepia wash so I will look into getting some instead. Meanwhile I have plans to add veins on the wings and then highlights across the so the veins look underneath the stretched skin. Hopefully this extra paint will cover the problem and where is does show through perhaps it will just look like extra texture amongst the other colours
Posted by 40kaddict at 12:54