My hobby mojo has been fixed squarely on painting these past few weeks. Blogging and even photographing the progress has been low down on my list of 'to do' because I've actually just had a whole lot of fun on this Winged Tyrant, Sepia debacle notwithstanding. The enjoyment has translated to leaps in progress and this is in no small part to the proportions of the model and how much of each element needs painting. Chitin, bone and reds seem to be in amounts that just don't result in feeling of tedium and frustration. 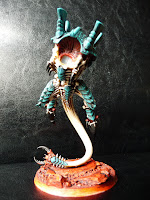 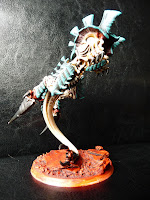 So I've steamed ahead with the first highlights on everything. On the bone areas I'm going to be continuing to add in extra texture through highlights, as I've done with some of the large creatures recently. This effect is similar to Ghoulio's over on Legiominimus and is also similar to the effect my mate Otty does on his. I think this stripey woodgrain effect is particularly effective on the tail. 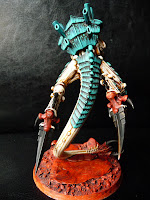 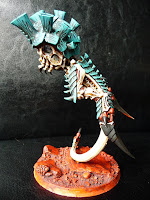 Here's the wings and as you can see I was able to salvage the sepia fiasco somewhat but thanks to natural lighting and the dark background these look much better in the photographs than reality. Extra wash has covered up the powder marks and the veins here act like a baffle disrupting the view of those areas where it's gone a bit wrong. 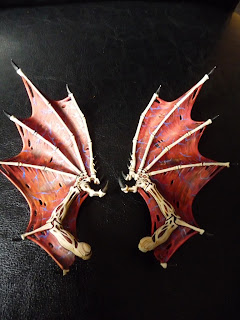 I was hesitant at this point to add anything else to the wings but the veins were too prominent so extra stripey textures were going to happen. 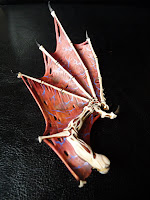 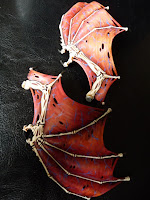 As you can see the veins are too bright, perhaps if I'd added them before the red it might have worked a bit better. Of course there are those GW glazes, but I'm reluctant to try any such effects following the sepia reaction. 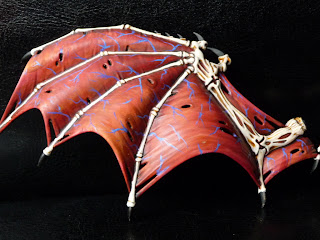 The veins are actually highlighted too, I think I used a cocktail stick to try and keep the lines thin and the line weight variable. You can still see the sepia 'cigarette burn' mark in the wings though... 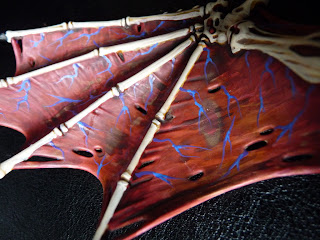 Lastly here's the Felshborer Hives as Twin-linked Brain leech Devourers. You should just be able to see the crusty scab reaction in the crook of the fingers on the left hand [nasty isn't it]. To get away from the pinkiness  of some of the red highlighting I have used my Vermilion art acrylics on the fleshy bits. This 'double-cream' thick paint can be thinned with water and adds a nice glaze in places. 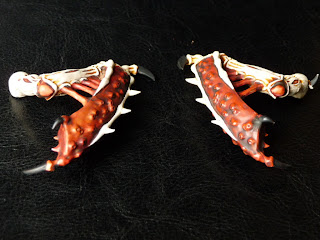 Anyway, ToS tomorrow, lets see how this baby performs!
Posted by 40kaddict at 12:29