Here's the second of my MAWS tournament matches. This was a four-way tournament between my local friendly neighbourhood Gaming club - The Lost Boys against The Ribble Warriors, Northern Warlords, and our hosts the Manchester Area Wargames Society [or MAWS]. There were three battles of 1600pts with a time limit of 2 hours, sadly this meant I was pressed for time, you know me, so pictures are sparse given the need to actually play. Also it's been a week so memory may be sketchy in places. Pat Divers was my second match but my first game ever against Tyranids! To be fair though there were at least 4 'nid players competing out of 24 so the odds of playing another Tyranid army was quite high.

The low down:
Pat was to go first with two Winged Hive Tyrants, two Tervigons, two broods of Termagants to make the Tervigons troops, the large flock of Gargoyles in the centre, two broods of two Hive Guard [behind the L shaped ruin top right] and a brood of three Zoanthropes right at the back! I set up with most of my Monstrous Creatures on the left out of range of his Hive Guard forcing him to take a long trek. The Trygon looks far forwards so I must have seized, again! Stealers are all to the left Infiltrating in the ruins. My Hive Guard targetted the Tervigon on the left. Pat was under the impression that Hive Guard were BS3 so he was delighted to find out they were BS4. Probably more delighted in his own turn rather than after the 3 wounds or so on the Tervigon. There were further discrepancies regarding cover saves from Impaler Cannons but again for expediancy they just didn't get cover saves from them* Also my Biovore managed to kill 6 of the Termagants in one brood! 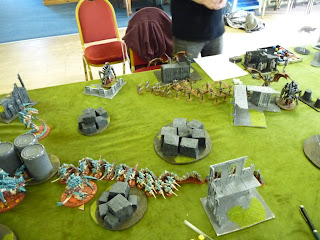 Pat rolled for Spawning on the tervigon on the right and suffered three 1s for his pleasure [perhaps i should have targetted those with the Biovore? He then flew the Gargoyles forward, which was fine by me as I fancied 14 of those fellas against my 10 Devourers and 4 Deathspitters I managed to take out 10 of them. However, Pat had brought forwards both Hive Tyrants and I had to torrent them with the Deathspitters and Stinger Salvos in the hope they'd be grounded. I managed to get one down and he failed his save and took a wound. 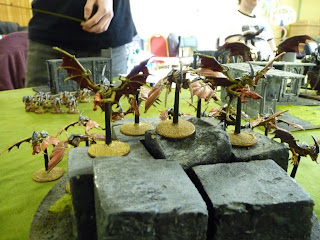 Which suddenly changed my focus on the left. The Trygon had to take out the Tyrant while he was gorunded, he'd taken wounds from the Brainleech Worms and neede to stop him while he could. He made it into assault but was on 4 wounds versus 2. Meanwhile the other Tyrant was to Brainleech the Stealers in front of him 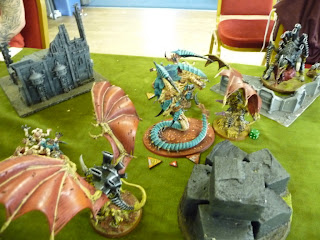 On came the Doom and sucked the life from a load of the Termagants and after all shooting one was left! The Doom also took a wound and a model off the Hive Guard  Broods and wounded the Zoanthropes. 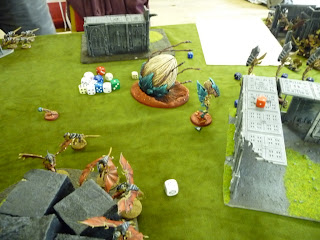 The Gargoyles set up to charge the Hive Guard 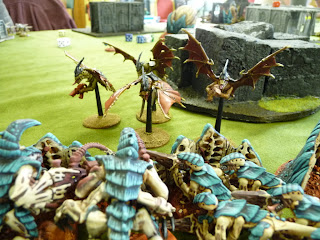 But before that the Doom and it's Spore Pod was splatted to finally get First Blood for Pat in turn 3. Once again it was just one saving throw I had to make with 10 wounds but it was Instant Deathed by Impaler Cannon Fire - he so needs Iron Arm! 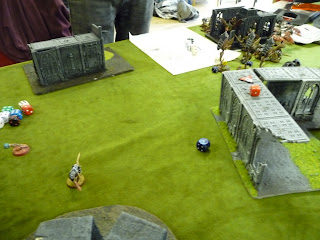 The Trygon couldn't take down the Winged Tyrant and instead was punished thanks to Prefered Enemy re-rolling to-hits and to-wounds. Somehow the Stealers managed to get into assault with the Tervigon, the Broodlord challenged and stripped the remaining wounds off it but as they were both Initiative 1 the Tervigon squashed the Broodlord in it's death throws. I think it also killed off the 4 gaunt Brood next to it too, unless the Biovore did that... 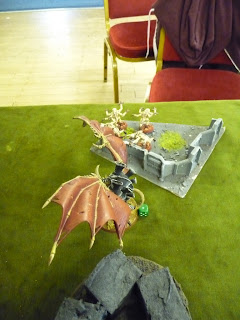 In an effort to get more guns on the field one of the Tervigon spawned and they raced to try and get firing on the remaining Termagant. 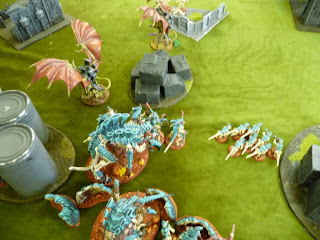 Everything else moved forward I may have killed the wounded Tyrant but not before the stealers got splatted, losing me Line Breaker. The Warriors tried to get there but it was too far just yet. 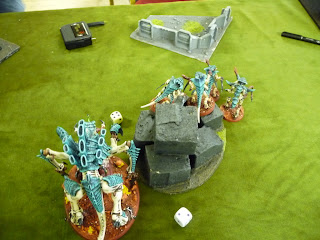 The other tyrant swung round the grain silos and killed the Biovore for an easy VP but was grounded and took a couple of wounds. The tervigon pounced on it while it had the chance. 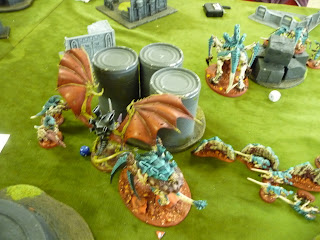 Last pic and I think the game was called shortly after with Pat winning by 2 VPs thanks to Line Breaker and First Blood. Unfortunately the Hive Tyrant I killed was not the Warlord, which would have helped 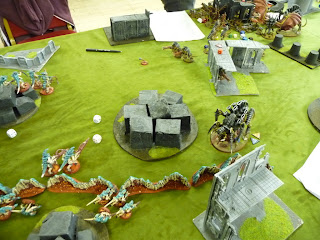 This was a really good game, it was funny though how much we both had to keep referring to our Codex for rules. You'd think between the two of us we'd have had every stat and ability covered but it was like we were newbies. I certainly had a newfound respect for the Winged Hive Tyrant, although it may be more to do with the fact there were two in play. You have to hit it with a lot of shots to ground it and if there's two it certainly reduces your chances to do that. Now if I can get an extra pair of Tyrant Wings and Fleshborer Hives I could run two as well!

Personally if I'd been Pat as soon as I saw my set up I'd have shifted the Hive Guard and Tervigon nearer in the following turns, they didn't do very much, as you can see in the last shot they're practically irrelevant to what was going on! But it was really a great game and interesting to finally face another 'nid force.
﻿
* The Impaler Cannon ignores cover saves for intervening terrain, however the FAQ states:


Q: Can a unit take cover saves from any source other than the terrain they are in, or touching, against Wounds caused by ani mpaler cannon? (p47)
A: No.
So, you can get a cover save if you are touching or within area terrain, just not if it's between you and the Hive Guard.
Posted by 40kaddict at 12:35