Here's the third of my MAWS tournament matches. This was a four-way tournament between my local friendly neighbourhood Gaming club - The Lost Boys against The Ribble Warriors, Northern Warlords, and our hosts the Manchester Area Wargames Society [or MAWS]. There were three battles of 1600pts with a time limit of 2 hours, sadly this meant I was pressed for time, you know me, so pictures are sparse given the need to actually play. Also it's been a few weeks now so memory will be even more sketchy in places than usual. Paul [sorry I forget his surname] was up last with his Imperial Guard.


The low down:
Here's my initial setup, my Aegis was right on the half way mark as you can see Paul set his Aegis up within 12" of his board edge. So I still had 24" of empty killing field to cross so I kept the Trygon and Stealers off to Deep Strike and Outflank. 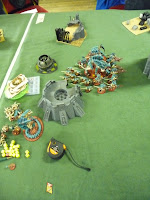 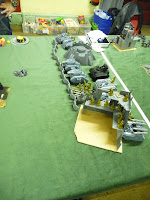 I spawned some Gaunts and pushed everything forwards but tried to stay in cover with the big stuff. It turned out the objective behind my Tervigon was Sabotaged so I would spend the rest of the game trying to keep fragile Termagants away but near in case I needed to secure the objective. 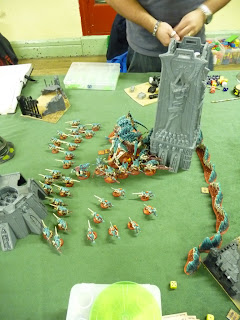 I repositioned the Tervigons so I wouldn't get anymore wounds taken off by the Leman Russes. Everything else moved up to the Aegis and I think it helped keep them alive and I can recall thinking it actually paid for it's points in saving lives this game, however I think the Hive guard had taken a casualty or two. 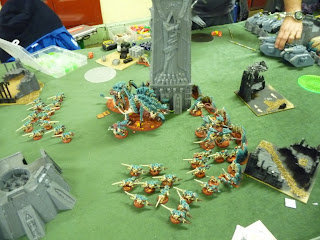 With a vacant spot where the Leman Russes had been the Spore Pod landed exactly where I wanted it to be. 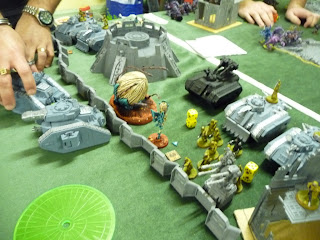 Genestealers came in on the flank. 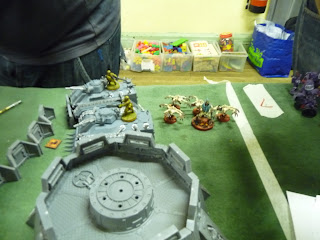 The Doom sucked life and was up to 10 wounds, the Spore Pod failed to do damage. 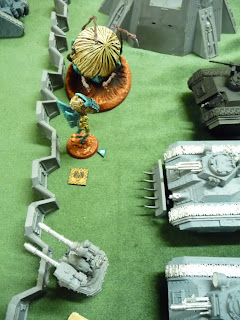 So, all the Doom had to do was make two saves or be insta-killed. That's right he makes one and fails the other. 4 saving throws in three games! He obviously did some damage but I really want to seem him last a couple of turns just to add an extra level of annoyance. The Spore Pod also got killed. 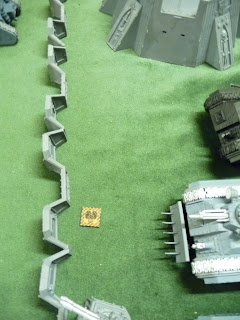 The Warriors suffered extensive damage, I'm not sure from what but given the Warrior that's left nearest the Aegis I'm thinking it was some form of barrage weapon or perhaps a Vendetta shooting from behind? 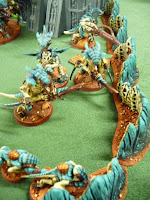 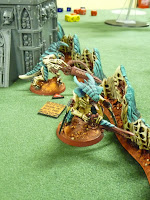 The Broodlord had managed to survive a torrent of lasgun fire and managed to trash the Chimera, exploding it with the occupants left to hunker down in the wreckage. 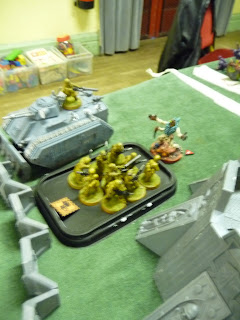 Unfortunately this was the last of the pictures. The Trygon eventually appeared in the same spot the Doom had been and the second brood of Stealers cam on on the other flank and headed for the objective on the second floor of the building. Amazingly the Biovore had struck and killed the two guardsmen defending it and the unit routed. The Stealers got into the ground floor but later on another unit of Guardsmen managed to make it into the ruins. Eventually we ran out of time, unfortunately we only got a 1 minute warning in this game and only just completed Paul's 4th turn, with mine still to go. At that stage I was 1VP up somehow 6-5. We debated whether to 'rewind' to the end of turn 3 so we would have a fairer VP count which I believe would have been more in my favour but I settled for the small win. Who knows what would have happened with the Trygon, remaining Broodlord on the left flank and stealers gunning for the objective in the ruin on the right flank?

Anyway, a good game overall, tough but a great learning experience. As for the actual tournament we came 3rd, which is one place better than last time and I came 13th overall [presumably out of 24] with a win, loss and draw. I'm happy with that, the draw was lucky and the other two games were also finely balanced. I'm convinced if the Doom had have been just slightly more durable he'd have been the key to tipping the balance further in those games. So does that mean hope for Iron Arm in Biomancy or forget it and just make him even more killy and take the Telepathy primaris power - Psychic Shriek - essentially his Spirit Leech special ability just with a Deny the Witch but no armour or cover saves! Of course I may not need the extra wounds Absorb Life gets me and I miss out on the AP1 of Cataclysm but it could seriously damage nits round an objective... something to think about.