It was my brother's 40th Birthday on the 21st and it just so happened to coincide with the return of the Floral Hall Rock Night. We'd been looking forward to this since January. The Floral Hall Rock Nights were my first taste of debauchery when I was 16, grunge was just hitting and my first night I was involved in a three tier human pyramid to Slayer - what price such memories? Well the Floral Hall is a little more upmarket now but they started letting us old rockers back a year or two ago and this was our first 'reunion' [they were called Old Ba$tard Reunions back then]. I'd booked a hotel for the wife back in Jan and so I got it 'cheap' and it was kind of an anniversary present too.

But my back's gone, so no dancing and the drugs I'm on? No drinking and I was awoken on Saturday morning at 5:20 am to the dawn chorus of the wife vomiting her guts up! I had some irrational fear of pregnancy for a split second - that ain't happening but the culprit was decided as sweetcorn - sodding Jolly Green Giant. So she was not going anywhere and to top it all the mother-in-law was sick on some new tablets for a kidney infection. We're a right family of infection! So even if the wife got better we weren't going to ask her to look after the kids overnight. So I gifted the hotel room to my bro and his new girlfriend, it seems generous but in reality if the wife was well he was just getting the entrance fee to the rock night!

If you recall the post about my 'gaming crew' you may remember this picture of the guys, but they were also my Rock Club buddies, from our local venue in Ormskirk, to The Floral and Manhattans in Southport. 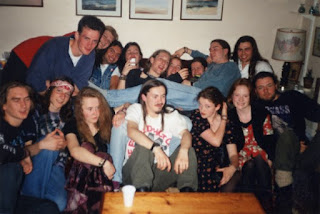 And here are some of the same folk back on home turf 20 years later! It was a great night, even sober and my back was fine until late on, I guess standing up was good for exercising the muscles in a non-impact way. 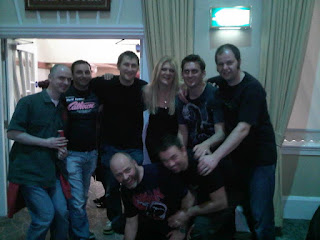 So what's this got to do with the price of fish? Well some of the guys still game, Ben [second from right] lives just down the road from my sister-in-law Otty [front and blurred] has even been to my local friendly neighbourhood gaming club as Rob the chairman teaches his kids at school. And of course who can forget Liam, he of the scratch built Warhound and Warlord [front and center]? So a lot of catching up and great fun, but...

as my bro was otherwise engaged that evening he asked me to drop his card off at my parents home the next day. So after chatting about this and that to my folks I finally did what I've been wanting to do since I started gaming again and that was to have another root in the loft. I did it many moons back but purely for bits to sell on ebay, this time I was after a few things:
The loft was where I spent many of my formative years painting figures, I've shared a lot of them here already. It's now a dumping ground [as most lofts are] there are at least 3 TV aerials up there, only one functioning, 6 or 7 suitcases, a crib, a full size workbench [no I've no idea how it got up there] an old empty water tank. Obviously these were not the things I was after and the treasures I did find may not have been all of what I was after but I think I may have found so much more and so I was reminded of Tutanhamun's Tomb, which we saw recreation of in Manchester

I have such treasure to share with you, on top of all the progress so far during my recuperation I wanted so much to take a picture of the haul but I'm having to bring it piecemeal into the house so as not to arouse suspicions of the good lady. As a taster though I found a stack of old White Dwarfs, I've checked out just six so far ranging from issue 139 to 157 and I've been able to date when I went to Golden Demon and when I went to Games Day from these alone. More importantly I actually have photographic evidence of the original inspiration for my battlefield Mars or Ferron Proxima as we now call it. There's a picture of

and if you can get past the shell suits and greasy haired youths a'gaming you can appreciate why it still inspires me to this day.

So plenty to look forward to and considering I was up until 3:20 last night why am I writing this at 12:50am when I could be writing it any time when it's flippin' daylight, so much for these drugs making me drowsy!