My Sky Slasher Rippers drop in and shoot the scouts, but one remains. Here's where that failureto spawn first turn would have ensured a scoring unit might have claimed my own objective. 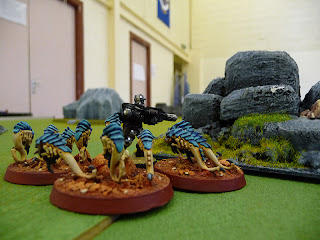 Meanwhile the Hormogaunts fail their instinctive behaviour test and set about the squad of marines, once again it does not go well and perhaps by this stage the main objective is now no longer in my posession. I'm not even sure where the Devgaunts are in this now. 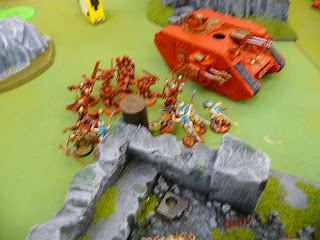 Doing what the Stealers failed to do the Prime and warriors mop up the other squad of marines and consolidate onto the objective hidden from the Long Fangs. 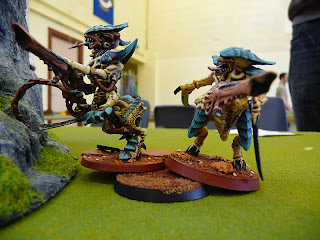 The Gargoyles set about the reaining wolf lords [?] whatever, they were in Terminator armour and I think they were about as ineffective as you could imagine. 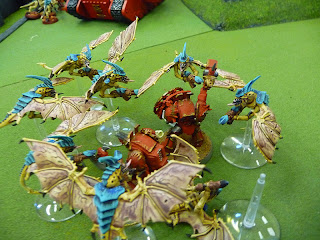 The Ymgarl's appeared at some point, but by then the squad of marines were out of charge range and had consolidated onto the main objective. Meanwhile the Razorback and Vindicator rounded on the Prime and Warrior and pulped them to pieces leaving my one captured objective free again. This pretty much left me with nothing except the points for killing his HQ.
Then I had to work out Kill Points, which wasn't fun. He'd killed a lot and I'd done little a comprehensive defeat. I'm not entirely sure what I could have done differently but I think losing the Tervigon and Tyrant was tragic and coming back from that was probably too far. I couldn't take out the Long Fangs and the LandRaider was never going to be an option. The Stealers failing to perform was also unlucky. Anyway the next match was a chance to win one for the Ripper!
Posted by 40kaddict at 11:59