Finally, a Red Planet board and suddenly my army looks sweet on it. I think there were five objectives with points for controlling each at the end of each round. This is at the end of my first turn. All my Hormogaunts have barrelled up the right flank into that cover, towards that objective, the Warrior brood following in their wake. The Tervigon spawned to capture the objective in the fuel tank. Meanwhile the Devgaunts advanced into the crashed Aquila cover. 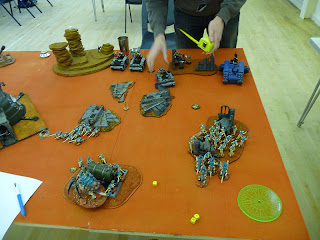 The Tyrant hid behind the building, trying to draw a bead on any transports with the Biovore milling around his feet. One major cock up was that at some point the Devgaunts were not in range of the hive node objective, they were just a couple of inches out, that would come back to haunt me. Additionally it was revealed that any unit would count as scoring to capture an objective, not just troops. So my major advantage on seizing lots of objectives went out the window. 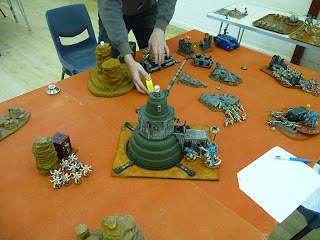 This brood of Stealers spent the entire game camped on the objective, not ideal but someone had to do it. There were a couple of teleport homers, servo skulls or some other weird GK equipment camped out next to the objective but if I got within an inch [or two?] they were destroyed, so at least they did that. 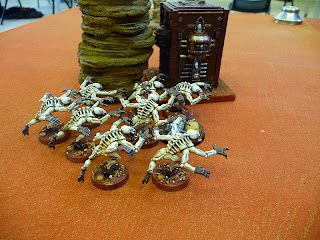 Hormagaunts were bullteproof within this terrain. The Land Raider Crusader seemed unable to do anything to them it's bolter shells pinging harmlessly of the ruins. Meanwhile the Barbed Strangler may have done some damage to the Grey Knight unit camped in the ruins opposite them. The Biovore may also have been successful and the Hive Tyrants Venom Cannon might have done something but the overall feel from my opponent was a belief that Tyranids are a 'template based shooting army', so I must have done something with them. 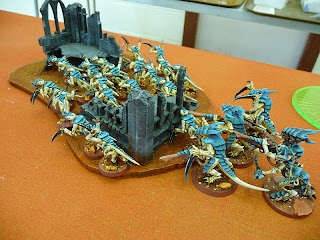 First up reserves, the Spore Pod deep strikes, next to an objective, the Doom gets out and sucks the life from some of the squad in the ruins next to it. The Ymgarls surge forth from the ruins of the crashed Aquila Lander. Sky Slashers dop in next to the Crusader [no I don't know why either]. Adrenal Stealers come on at the back there on the right. Devgaunts move into cover, 1st turn spawned Termagants move to capture hive node objective and 2nd turn spawned Termagants secure the Fuel Tank. Hormagaunts capture their objective but remain mostly in cover ;) and the Warriors don't move much through cover. 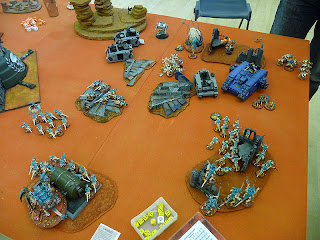 Shooting takes place but I'm not sure if much happened but you can see the Prime suffered a couple of wounds at some point :( 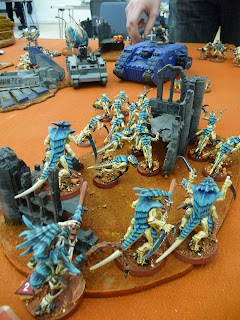 The Hive Tyrant has suffered one wound, his Heavy Venom Cannon penetrated a couple of times but even with the -1 [or is it -2?] to the damage chart I was rolling 1s and 2s anyway so didn't do any damage. 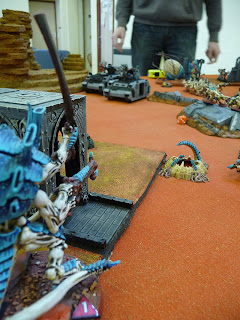 The Ymgarls mutate to slashing claws, meaning they slice through this squad like butter, they may have been stuck in combat but eventually they consolidate. Next turn I was left with a mutation decision. There was a squad that had disembarked I think I was on tentacles +1A so I would be mutating for slashing claws +1S which I would need to take out the Dreadnought. If I took out the squad I'd then be unlikely to penetrate on the next combat on tentacles so I was forced into tackling the Dreadnought which blew up. Afterwards I was told the squad was worth more points and would have handed me a better result but at the time the mutation was dictating what I should do. 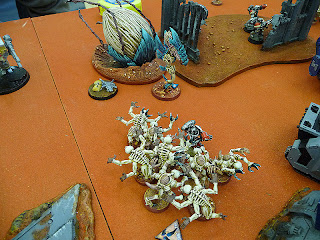 No more pictures I'm afraid so I'm hazy about the remainder of the battle. At some point the Doom got killed, that Toughness 4 is awful for getting insta-killed. Who cares if he's got 10 wounds even one failed saving throw and he's mush. But I deliberately took him to draw fire and his leeching ability worked well so that was a bonus.

I'm not entirely sure about Gargoyles or the Trygon Prime. They must have come on, the Hive Tyrant's Hive Commander bonus is a G.O.D.send for anything coming from reserves. Ultimately though the game was a draw, snatched from my victory. I'd dominated for most of the game, had secured most of the objective but in the last turn the Grey Knights had a unit teleport in next to the Toxin Stealers and beat them off their objective. I was pretty miffed so they may have been slaughtered, so spending the entire game camping made them fat and lazy and no good in combat!

I think I definitely had 2 objectives, the GKs must have had 2 also and the last must have been contested. The GK's had at least 3 Take and Hold points, so that gave them 2pts from the Secondary Objective and if I had 5 more T&H points than him then I got 4 Secondary Objective points, however due to him capturing that last objective he gained that third T&H point which game him the 2pts and denied me 4 as I had 7 T&H altogether. Then to cap it all the Kill Points tot up showed he'd actually killed about 50pts more than me! So if the Ymgarls and charged the squad instead of the Dread I may well have tipped that balance.

So I was pleased in how I'd done but gutted not to have secured a victory at the end. By this time I was knackered, my legs were exhausted and I still had another game to go.
Posted by 40kaddict at 13:01