Afternoon #warmongers and #warhammercommunity I'm #paintingwarhammer on my Dark Angels Deathwing Land Raider Redeemer. Mistakes were made... My Xerox Laser Printer did not like the decal paper! 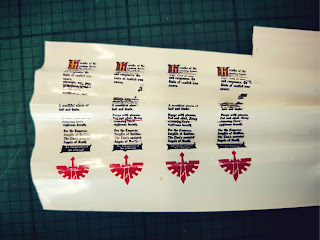 Luckily, I filled half the sheet with duplicate scripts and numbers and those at the top, above the wrecked ones, although slightly creased, were usable. I hoped that once they were floated off the backing paper all those ripples would disappear. 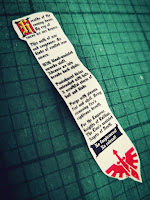 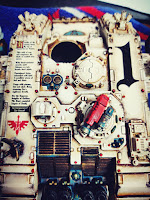 And I was right! The gloss varnish really helped blend the decal in. I did need to scrap one big number 1, as the tail got folded underneath and was irretrievable. The 1 was printed only as an outline, all that black was filled in with paint afterwards 😎 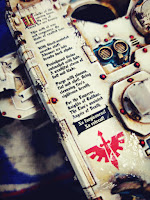 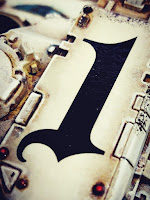 The script came out really well though and I'm absolutely overjoyed how I got to blend it in, with no sign of the dreaded decal halo. Where possible I try to avoid straight edges and corners as your eye is drawn to those anyway. The decal paper itself helped because it was very thin, almost like a slightly thicker clingfilm in a way, hence why I had to scrap the first big 1. So, the fiddliness of application is outweighed by the supreme finish. 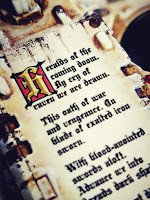 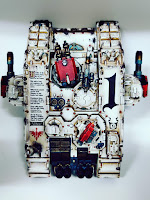 I also added the AdMech banner decal from the Imperial Knight sheet. I don't know why it felt like it needed something. I some handwritten script might have been nice here instead, but nevermind. I also applied a coat of Lahmian Medium over the decals. I am going to highlight the black in some places, that may be a mistake but OCD demands I do it. 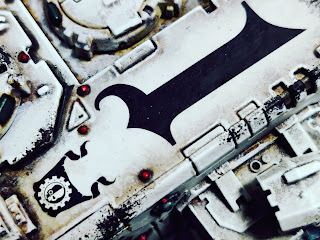 The Deathwing symbol also needs some unnecessary highlights and shading. 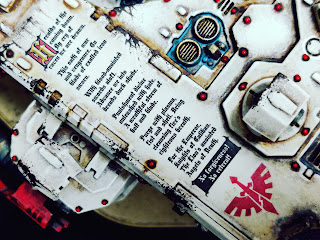 I'm really pleased with how it looks. You may also spot I started changing the hatch lenses to green. 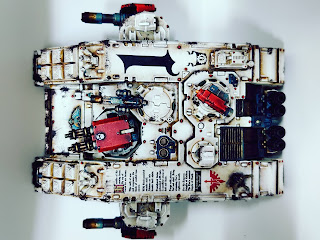 And a very subtle highlight on the 1, using Incubi Darkness. I don't know what possesses me sometimes. When I apply the matt varnish sometimes you can see the uneven matting agent instead of it being pure flat black. Here I've applied the highlight in such a way as to replicate it. Now of course I could go back in and paint it all black, but I fear it'll just add texture to it and make it worse. Hatch lenses have also been highlighted. 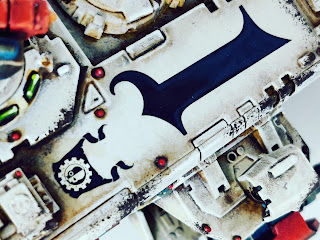 The Deathwing symbol is a little bit better. I also added some tiny highlights on the illuminated capital H. Incredibly subtle but really helps lift that bevelled effect in the letter. You'll see it better on the TO DONE pics. 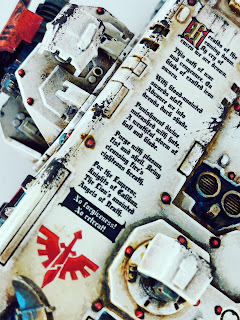 And here we go with weathering. As with everything I do this required significant internal debate. Despite already having my Ravenwing with weathering powders to simulate the red planet dust of Ferron Proxima kicked up I feared this would look like rust. But technically it should, as Ferron Proxima is essentially just a giant planet of rust powder. So I have a precedent that works and still debated doing this, but it looks great. 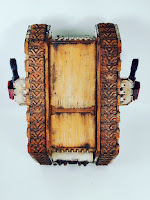 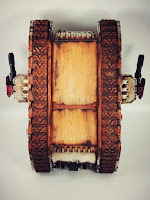 I didn't go overboard on the bottom, just enough to give a taste of the orange. 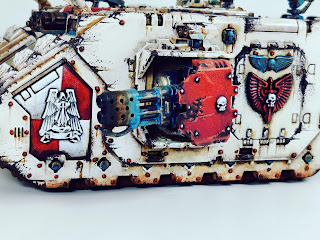 This is of course pre-varnish and some of it will disperse once it's covered. I may add in some extra Vallejo Rust Model Wash & powder in some of those exposed footwells. The tracks themselves could do with more, but they'll definitely need extra varnish as they'll be where the most game wear takes place. I also don't want powder smudges left on other people's gaming table [should I ever game again!].

After the varnish, just some gloss on the lenses, I will not be using Tamiya Clear on all of them, on the advice of commenters. I may be a little selective, the hatch lenses and the lights - yes, targeting lenses - no. And then it is TO DONE!
Posted by 40kaddict at 12:00