#Dreadtober update and as promised yesterday, today is just a preliminary wrap-up of pics. There's still varnishing to do and adding some flock but it's effectively complete. 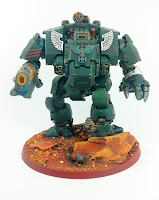 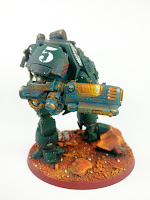 I have to say Dreadtober has been an absolute joy this year. Sure I made it easy on myself by prepping so much of it in advance, but I do that with all my projects and even so I almost [actually] didn't meet the deadline so I can't be too hard on myself - I know my pace. 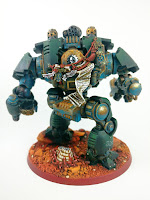 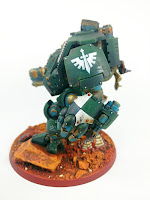 I think next year I'll have to post every time I progress instead of sticking to my schedule and doubling. it might be a nice exercise in micro-blogging and also help with the whole community vibe. 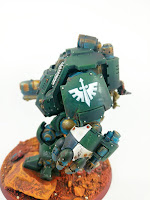 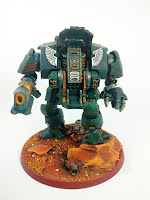 It's also worth mentioning Mordian 7th's hard working in keeping Dreadtober up-to-date not to mention painting his own Contemptor Achillus. Collating everyone's work in an additional blog is a thankless task, so I just thought I'd say 'thank you'! 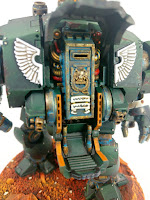 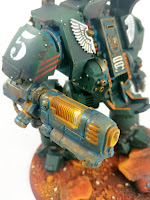 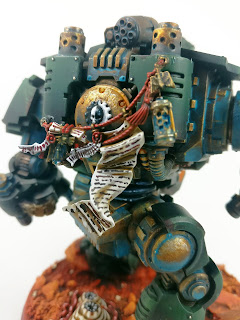 lastly a couple of comparison pics, alongside my old skool Rhino/Razorback. Not quite as saturated green, but the battle damage is comparable. 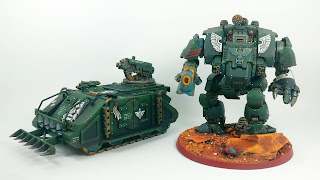 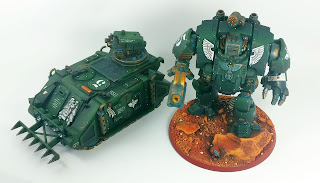 And lastly, alongside my Armiger Warglaive. I think the Warglaive just edges the Redemptor - it's on a bigger base for a start and I was always rather horrified that the interred marine's tend to 'burn out' in these newer dreads. It's horrific and seems perfectly grimdark 40k, but there is an element of callous disregard for a venerated brother and for me that doesn't fit with how marines honour their [almost] fallen [not that kind] comrades. 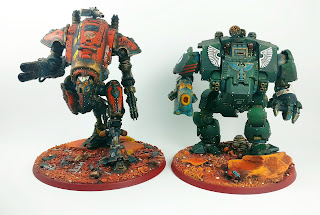 That said I have grown attached to the Redemptor, something I never thought when I initially saw the model. It's just a little sad I can't envisage playing Dark Angels for a while because of the new additional rules, but I've said before they can be my 'display army', even if the Tyranids are actually more of a display! Anyway, happy Hallowe'en, happy Dreadtober!
Posted by 40kaddict at 12:10