#Dreadtober update and yet moar application of the metallics. This is the mid-season finale so to speak, whereby I apply the final set of highlights before I add a wash layer to grime it up a bit. I believe it's Valejo Game Color Gun Metal and Shining Gold [whatever they're in this intro set and still going strong after 9 years] sponged on for the texture.

It works particularly well on the hip joint. There are still areas I can't decide how to paint but I've no doubt my decision will crystallise green or bronze without delay when the time comes.

The weapons also got their highlights, I even had an Imperial Knight Icarus array that got a quick highlight. I will regret not pursuing the Deathwing Knights in parallel but that would dismiss my feelings that it would be too much to take on simultaneously and despite the metals being the same the application requires a different approach. The terminators are much smaller and need more care, whereas this thing is a beast and I can just slap it on and any issues can be covered up with battle damage. It's actually quite a freeing experience. 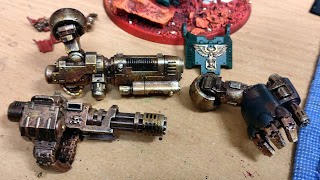 The sponging is so rough and ready but the shade wash will balance it all together. I'm sure red casings like the 'eavy metal studio army would be so pedestrian for me now. I considered having a bit of green on it but there's something about a Dread that I did with Brother Cask [shares link then realises there are no back shots 😔] whereby there is the green armour built over a metal skeleton, much like how Imperial Knights would be presented. 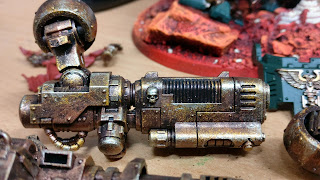 So I was already imagining the paint scheme years before I did Euronymous or knew Imperial Knights would be a thing. 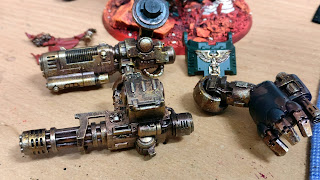 It's also another aspect of my Darfk Angel scheme. I chose them way back when specifically because I didn't just want to paint green. The Deathwing colour scheme gave my bone too and then they canonised the Ravenwing black so I got a third option [not realising the havoc it would play with my future hobby mojo] and then the bronze which ties it all together, the verdigris not too dissimilar to the green but on a big model I can play around with the metallics even more. That way is mostly green from the front then metallics all on the back, like a surprise as it turns round.