I know it's Dreadtober but I had been working on these Blood Bowl humans prior to that and it was a roller-coaster of emotions in the few weeks beforehand. It's amazing how you can go from such a hobby high - absolute motivation and feelings of success to nothing. I have no idea why, I'd been sticking to a number of my processes and techniques to feel fulfilled, then I started painting my Blood Bowl Human team and it all seems to have evaporated. Despite being on my To Do List and being what I wanted to paint, even if they weren't the priority items I'd originally identified, it hasn't helped sustain my mojo. 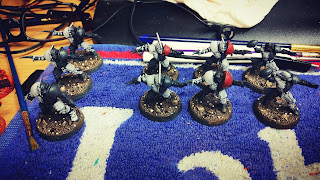 I had just felt I could do the base coats and there was no pressure, I could predict how much progress I could do and although the output is 'samey' - the team is all dressed identically, how is that different than painting 10 Termagants? 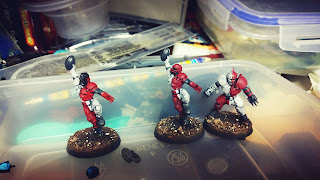 But I did progress nontheless, but perhaps at the expense of my mojo... Despite feeling 'this is what I wanted to do' and being impressed with the results. 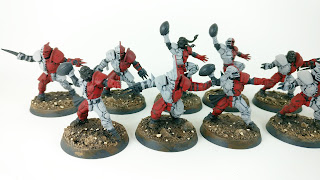 I managed to get them all basecoated and would go on to do the flesh-tones across the team. 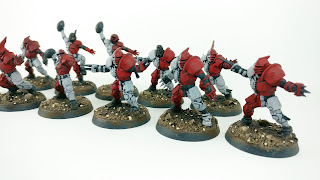 Then it was Army Painter Strong Tone [Agrax equivalent]. Foolishly I did the Bronzed Flesh guys with that, when a Soft Tone would have been better.

With them shaded I then added Stonewall and Khorne Red highlights [on the one on the right]. 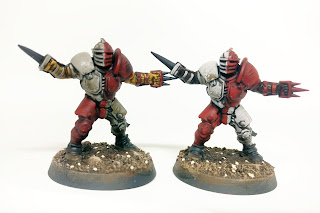 A single thin coat in places, stippled on to add some texture/dappled weathering effect. 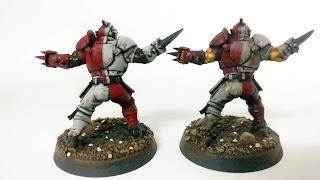 Now this highlight takes an evening, so I could predict 12 nights work but I wanted to progress one of them with the second set of highlights - white and Valejo GC Bloody Red and part of me felt I'd gone too far, particularly on the red. I think I've lost something in the rich scarlet. So whatever motivation I had for these has waned somewhat. Luckily I have other priorities to jump to but what do you think? Which works best...? 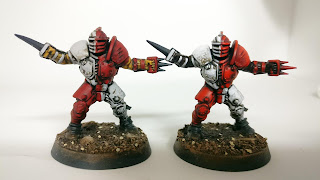 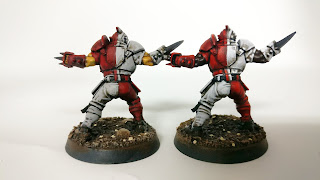