#Dreadtober continues inexorably but as expected my progress is slow. In fairness this has nothing to do with the model or even the usually problematic brassy bronze. No it has been impacted both by the weather and general fatigue. Heavy rain has meant the garden has flooded and wading to the Man Cave in my wellies has often been sufficient to discourage me even attempting to crack on with my Dread. One night I braved the elements to get out there and slap on some Balthasar Gold on top of the Warplock Bronze.

Weapon options too. Originally I hoped to throw in my Deathwing Knights as well, as they are at the same stage but half an hour was just about as much as I could do before I felt it was time to go to bed. I've been monitoring my sleep again using Google Fit, I think I've made a little improvement in my sleep schedule. There are still the occasional late nights but I think they're more uncommon now. I've had some early nights too, which doesn't help the hobby obviously but should help me long-term. 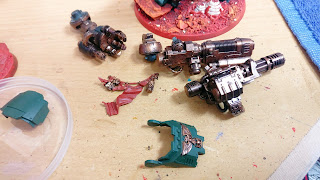 Another night I got out to the shed and managed to sponge/stipple on some Retributor Gold. I'm a little uncertain on some areas of metallics but I'll continue on until they're all done and then decide if they should still be bronze or in fact green. I'll need to cover splodges anyway so it's no real hardship.

The guns are coming along too. 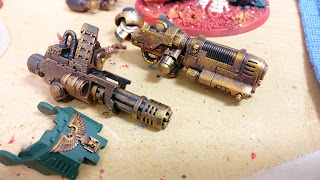 And the Fist, which I'd been rather impressed being black next to the green body but immediately decided I would not eventually keep it, but will quarter it so the fist is the 5th Company symbol. Really pleased that decision just came to me in a two step realisation. No doubts, no prevarication, just that looks cool, oh, or that would be cooler! 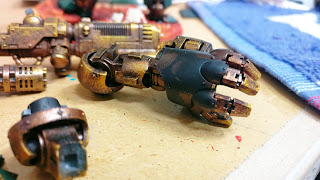 Another set of highlights to do, then shade washes to balance the colours.. This might then require some small highlights to sharpen things up and then it's some limited verdigris and on to the greens.
Posted by 40kaddict at 12:30