Warhammer 40K the next generation

Typical, after the high of #dreadtober - both with my hobby progress and surge of joy blogging about it I ended up with a bit of burnout, coupled with a number of things meaning I didn't have time or motivation. But we've been there, done that, many times before so I won't bore you with apologies [again].

What I will say is one weekend had us visit Liverpool, the well-spring of my hobby journey and aside from peaking int the Cat Cafe and Worlds Apart [independent comic shop] I was allowed to visit Warhammer. I wasn't going to buy anything but the youngest did comment he's the only one never to play 40k [which isn't true but I wasn't about to argue with him], so I decided to rectify the situation.

I set up the Warhammer Conquest intro board with a number of my future containers, that in pairs perfectly fit a Munitorum Container footprint. A couple of other bits of scatter scenery [which I really must paint] and we were ready. I gave him 3 Tyranid Warriors and I took 5 Space Marines, one with a Flamer, so I was outgunned from the get-go. Conquest give ethe Space Marine player first turn and I moved forward. Oscar moved the Warriors behind the containers, but one had just enough line of sight to target a marine and killed 2 for my hubris. 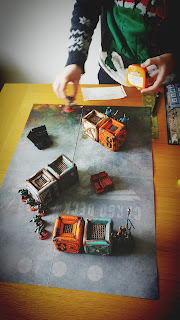 I would subsequently get into combat but after overwatch I only had the Sergeant and another Marine left. I did some damage to a Warrior. 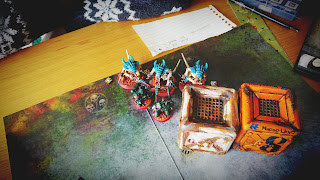 But I was utterly outclassed by this stage and he wiped the floor with my Dark Angels. 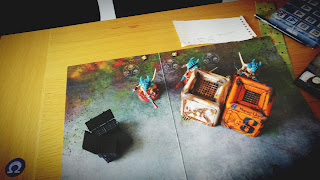 We couldn;t have played for more than 20 minutes but I was struck how hard it was to try and introduce some of the concepts - AP for instance is a minus modifier but when you describe it it's always a 3+ save becomes 4+. Try explaining to your child 3+ -1 = 4+!!! Anyway, he enjoyed it, said we'd play another game a few hours later after 'a rest' but it didn't happen, which is fine. I'm more inclined to want to try Deathwatch Overkill with him again, it seems a lot simpler and might be more of a springboard game.

Meanwhile, a little elf has mentioned how he may want to paint some things with me, these things would appear via a mystery red-suited fat man. So I have to think about things I would like, that might be suitable for a novice to also paint. I immediately though of the Warhammer Underowlrds Sepulchral Guard - Skeletons are easy to paint. Bone and rusted armour, or spectral skelly-bobs with rusted armour a doddle, but they only come as a box set without the cards now. I also thought of some Death Guard, as again Nurgle is very forgiving to the novice painter - rust, corrosion and slime hides a multiple of sins. 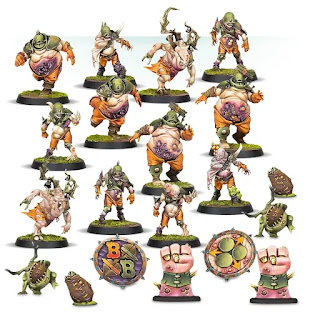 However, I think I might suggest the Nurgle's Rotters Blood Bowl team. OK that may seem left field, I hadn't played Blood Bowl since 2017 [I actually had a game last week  but that's not necessarily a call to arms]. But this has the same sort of advantages as the Death Guard painting wise, and has at least a couple of each model type so he can paint one and I can paint one and then I'll do all the bases to tie them altogether. Seems like a plan but if you have any suggestions for alternatives, or ways to teach 40k to a novice I'd be very interested.
Posted by 40kaddict at 13:17