#Dreadtober update - "so say we all" fellow Dreadtoberists and Dreadtoberistas! Given the timescale I pushed [aka rushed] on through with this last night. Not only did I resolve most of the remaining details, but I got the glow FX and battle damage done. 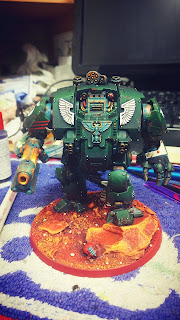 Now the glow FX is not my best work, but once again I can live with that. Tyler Mengel covered something applicable last week in his article The Art of the Shortcut I'm referring to - 'point 2. Focal Points', in that although my glow FX is the brightest colour and stands out, the actual high quality shading of the bulk of the model may help mitigate the roughness of the glow and gives the illusion that it has all been painted to the same standard. Either way I'm not that fussed, it's alright and I'm happy with 'alright'. 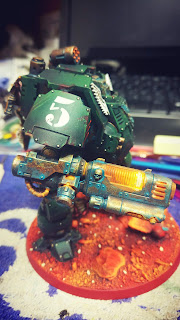 With the reactor glow done I could finally glue on the Dark Angel reliquary. I broke it off about 5 minutes later so I can foresee that super-gluing it is going to come back and haunt me. If it does it again I may try polycement. 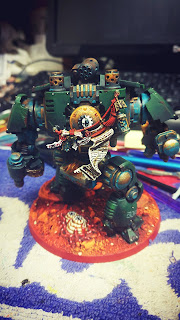 The fist is finished and battered. I loosely mixed Khorne Red and black and sponged on, so I got areas of more red and other darker areas so there was very little to do in making the damage stand out aside from the green highlight. This was mainly dabbed on after thinning with water and where it was a bit blobby a quick tap with my finger would blend the edge while leaving an area that was more saturated. I mean the detail isn't pristine/fine but it does the job, much better than 'alright' anyways ;) I didn't want too much damage as Redemptors are a 'new' unit and I noted my Old Skool Rhino/Razorback wasn't riddled with damage so this fits. One major success is I was a little more selective with it's application - mainly on the lower half, unlike my Knights which seem to have loads of damage on their carapaces but not many units are bigger than them to visit such damage... 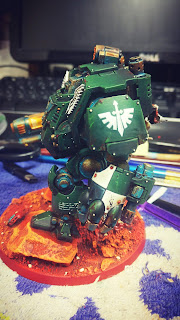 And that's pretty much it, I need to add a couple more coats to the base rim, varnish and Tamiya Clear the lenses with some yellow flocking on the base. But, that will take a couple of nights and as Hallowe'en is tomorrow I'll be otherwise occupied. So what I'll be doing tonight is taking some preliminary pictures as it's all but complete so I can share for the culmination of Dreadtober. I'll finish it proper over the weekend and next week it's time to take stock on other projects again...
Posted by 40kaddict at 13:08