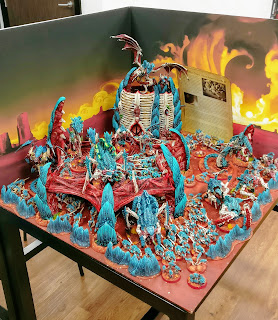 #ArmiesonParade has been and gone now, but I'm still ferrying my Tyranids back home from my staging post at work. So, how was it for me? I have to admit despite not being able to be instore I loved seeing twitter and Facebook explode with boards on the Saturday and Sunday. So, much so that come MOnday Facebook was so convinced that my sudden spike in sharing folks content was unusual it actually locked me out of my account thinking it had been hacked by a bot! Anyway, the quality of hobby was excellent and I even saw someone post a Warhammer Underworlds tile with a few warbands on it as their entry - the exact example I hoped for. Sadly I saw one person report they were turned away because they hadn't arranged their space in advance, such a shame as it was a tiny display, featuring just the main characters from Blackstone Fortress, a shame but we did get to see it online.

Manchester Warhammer took pictures of their entries, sadly I have none, but coincidentally did not reveal who had won anything, just that the winner was to remain instore in the cabinet. So in effect I have managed to experience a non-competitive Armies on Parade. I've no idea who won [didn't have time to look in the cabinet] or who received any awards, I even forgot to ask for my pin-badge and just got the crusader card. The guys in the store were very appreciative of the display though so it was all worthwhile.

Hopefully my twitter and Facebook shares make up for the lack of pics here. I still love the event and will most likely Parade my Knights and hopefully some Forgebane AdMech next year. I was not without reward though, Element Games runs a weekly competition on twitter and Facebook to win a £10 voucher. I had already won earlier this year, sharing my Tyranid Hierophant, but sharing my AoP board secured me another. Now I've £20 worth of store credit and no idea what to get with it...
Posted by 40kaddict at 12:01