After 3 years and 1 months since Brother Cask first graced Confessions of a 40k Addict he is finally complete. Yes indeed, in the months I have set aside for painting Dark Angels I've actually painted some Dark Angels! 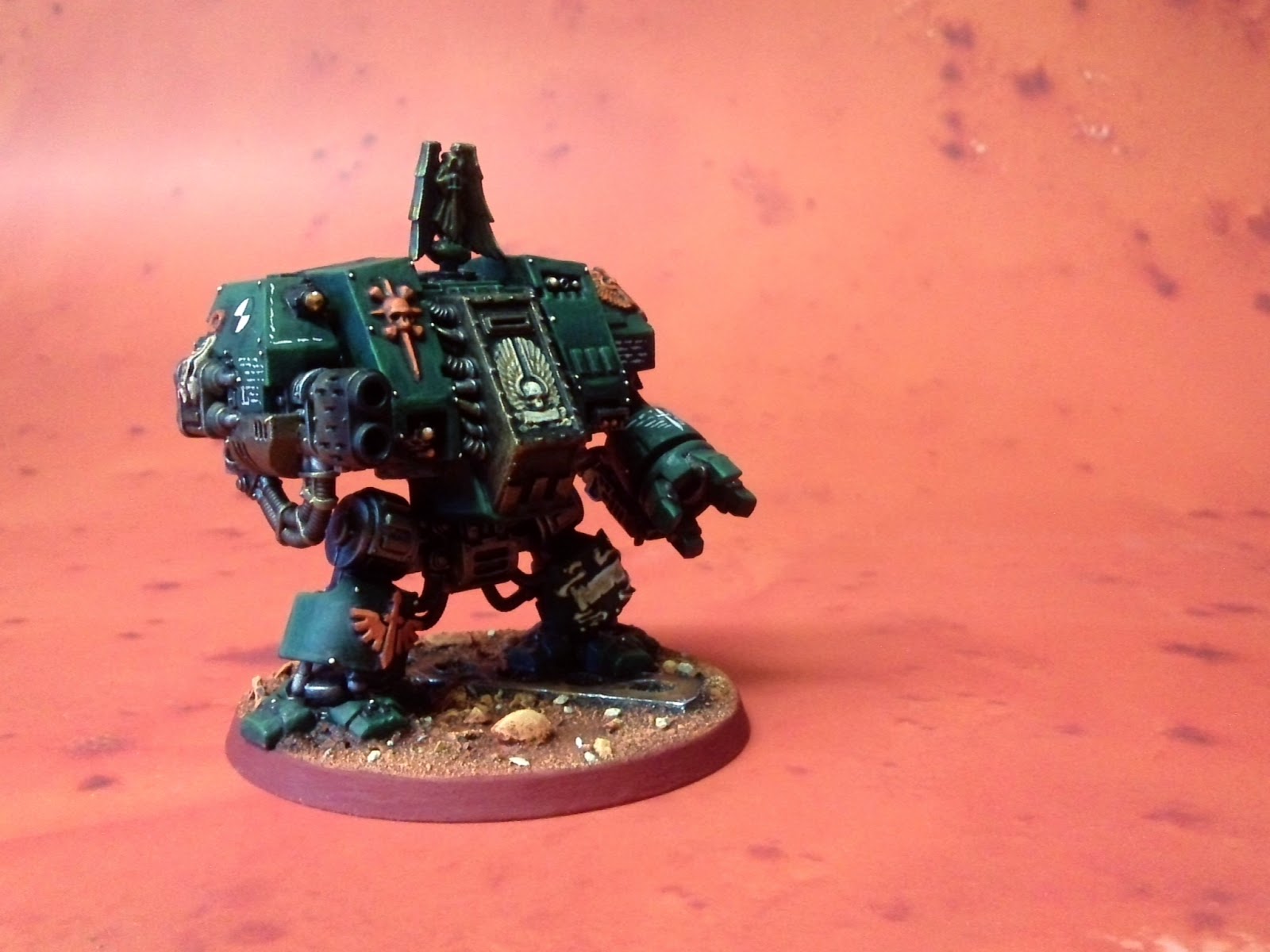 As you can see I've added litany writings and freehand 5th Company markings. I tried to use a circular magnet for the symbol, by painting it black and stamping it on the shoulder to get a perfect circle but that just made a blob. So I had to do it by hand but it came out pretty neat. 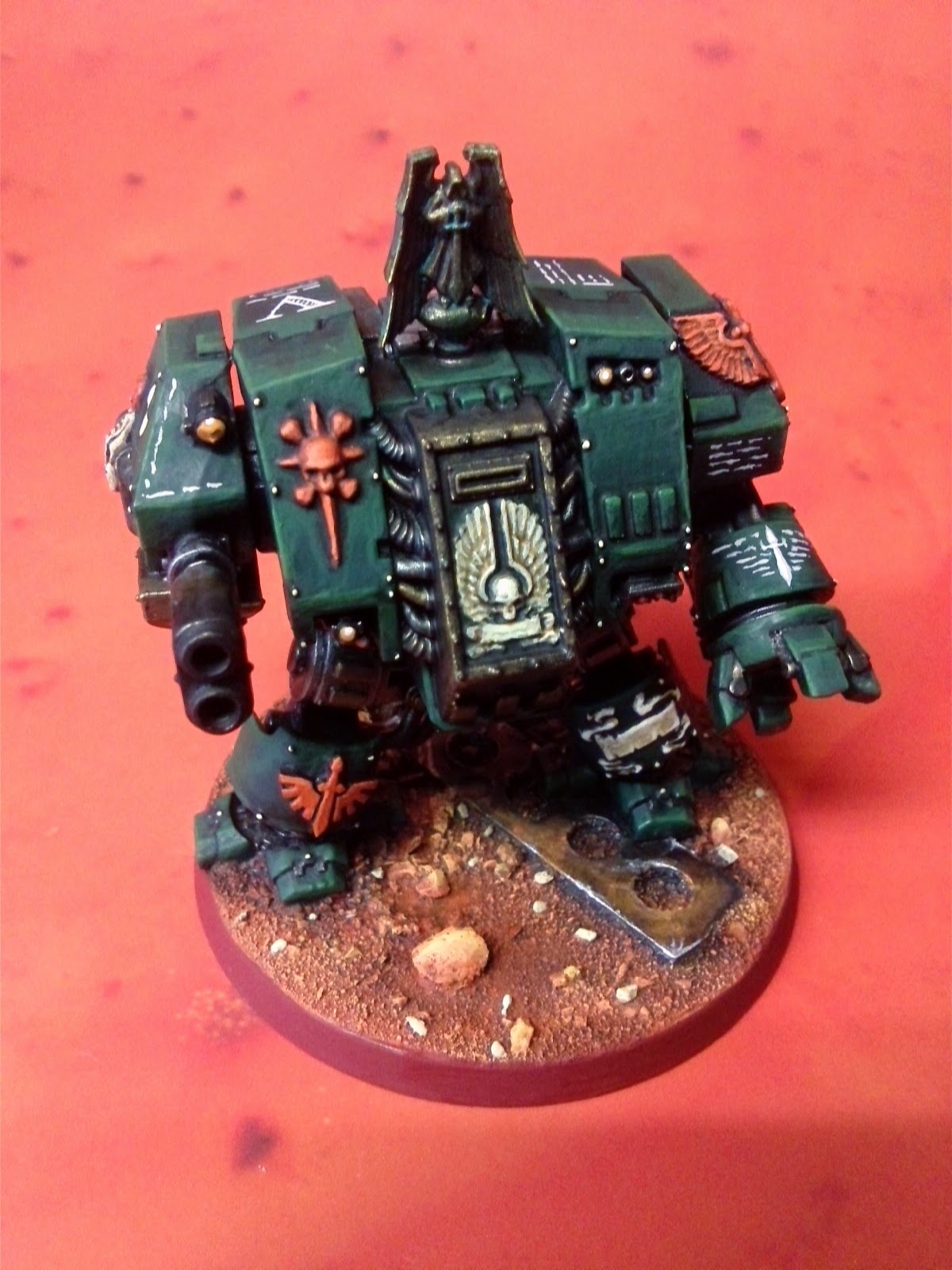 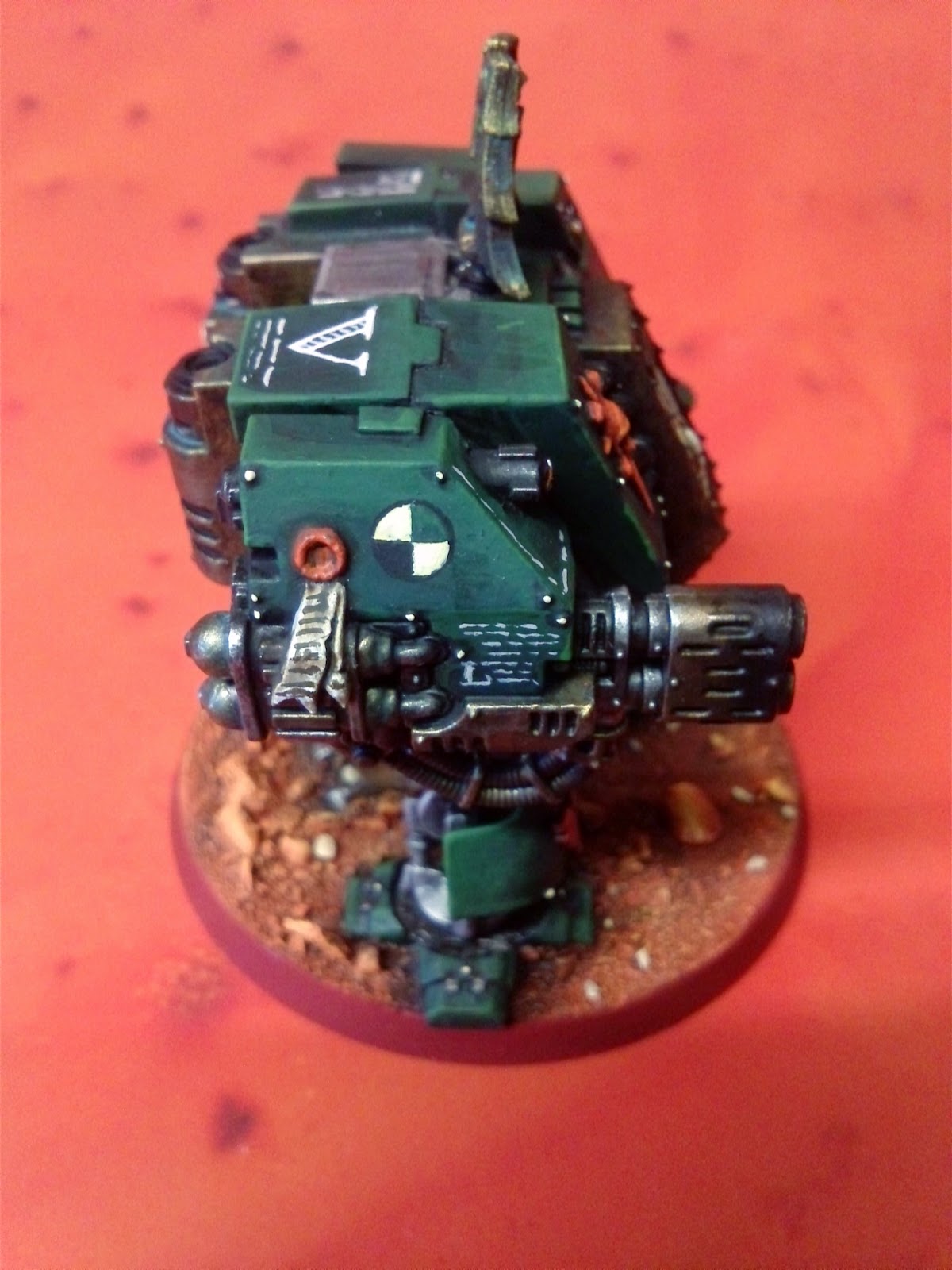 I think even with the litanies and extra detail work he's quite understated. He'll be used in some of my early games just because he's done, I may well have him come in my Drop Pod, should I manage to finish that! 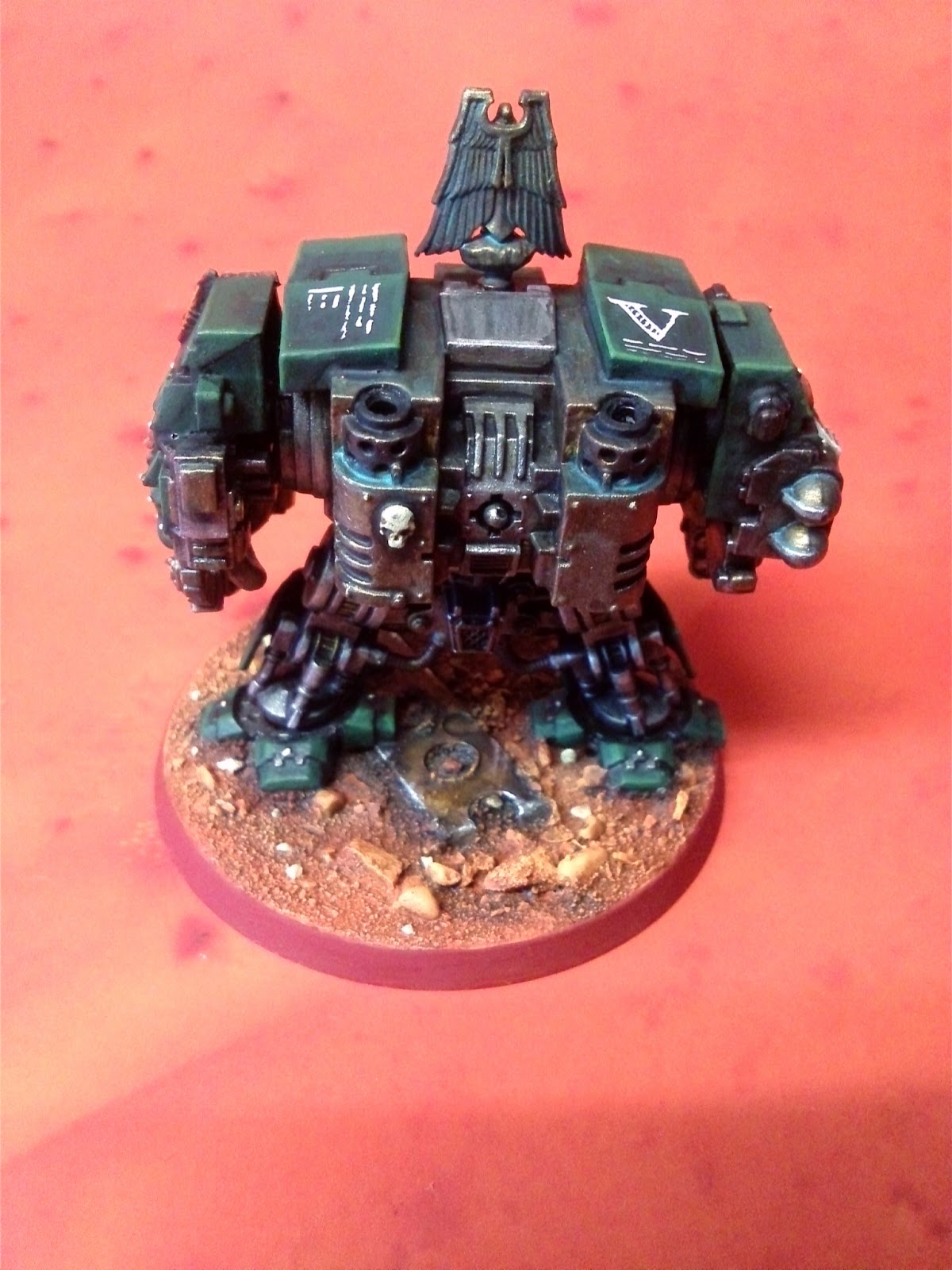 If I was doing another one I'd probably have used those top four panels to make the quartered 5th company symbol but I do like the V to represent the company and to be seen from a Titan. 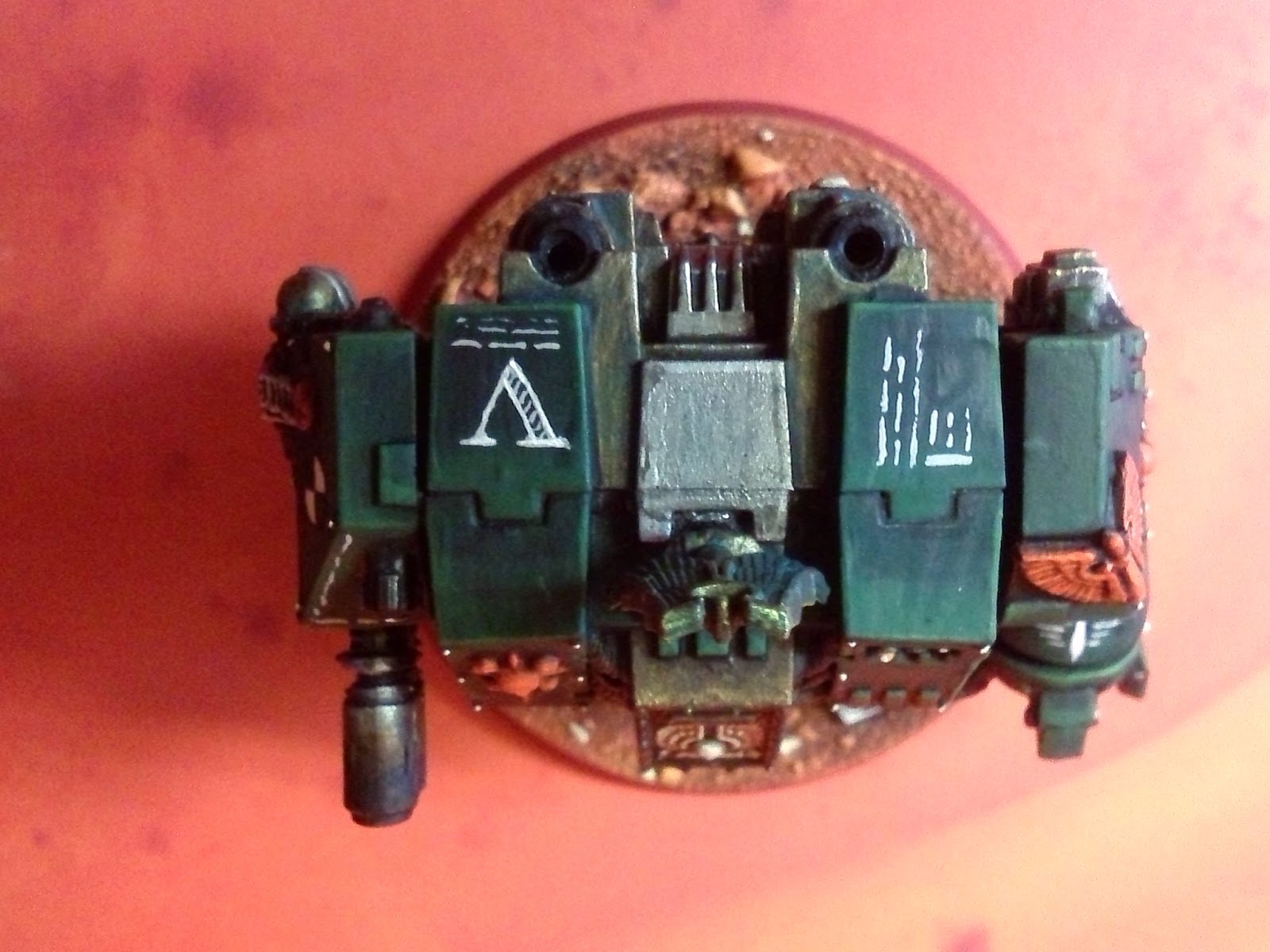 I say finished, I obviously mean there's still a little to do, some flock on the base and his name on his shins scroll. I'd painted over it and bought a technical drawing pen that claimed to be water resistant, which in truth it might be able to substantiate but it is NOT resistant to Army Painter Anti-Shine. So the redrawn 'CASK' washed away and I'll consider adding it on top, in which case it'll be a bit glossy or try and freehand paint it again, yikes. 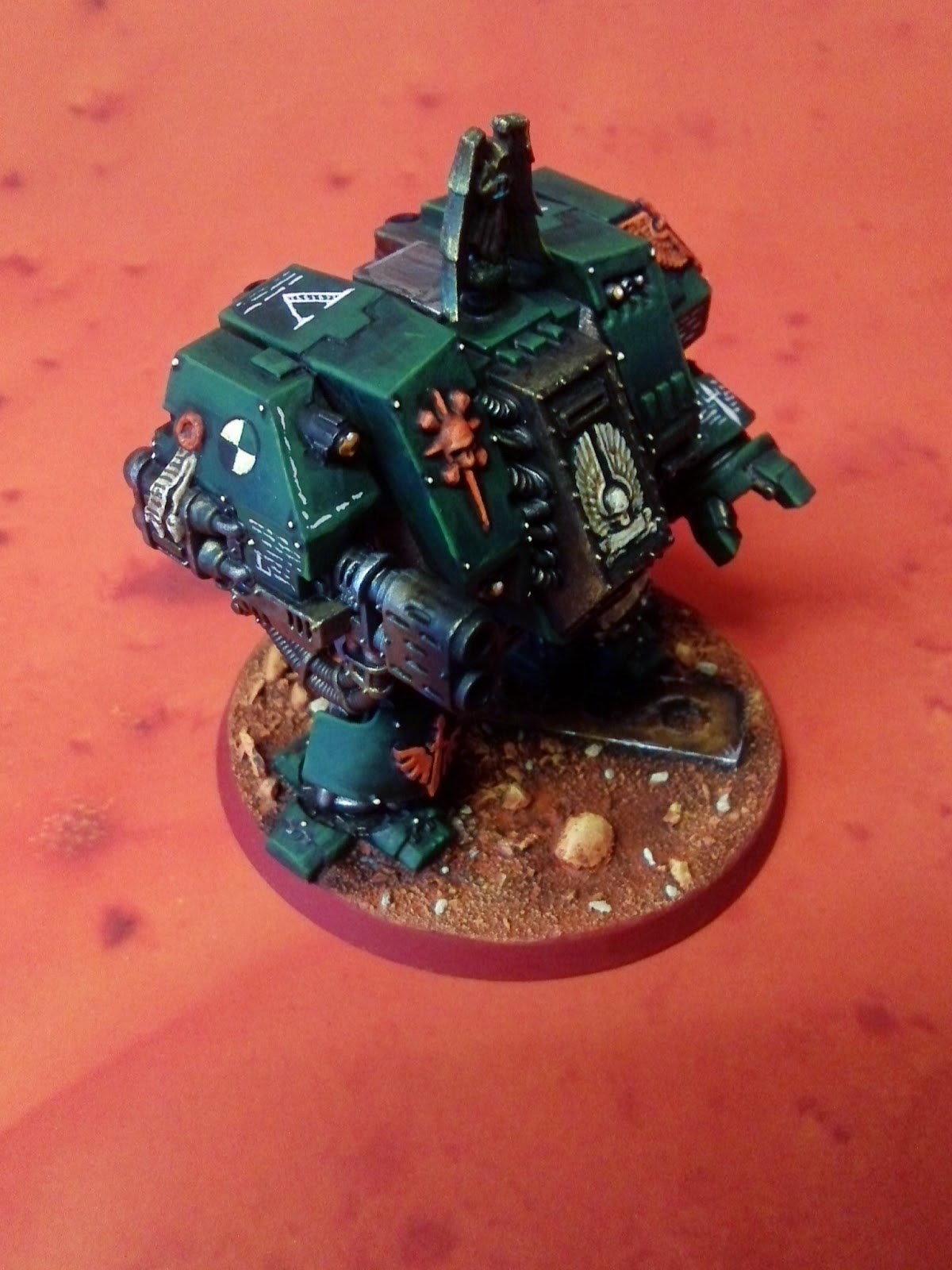 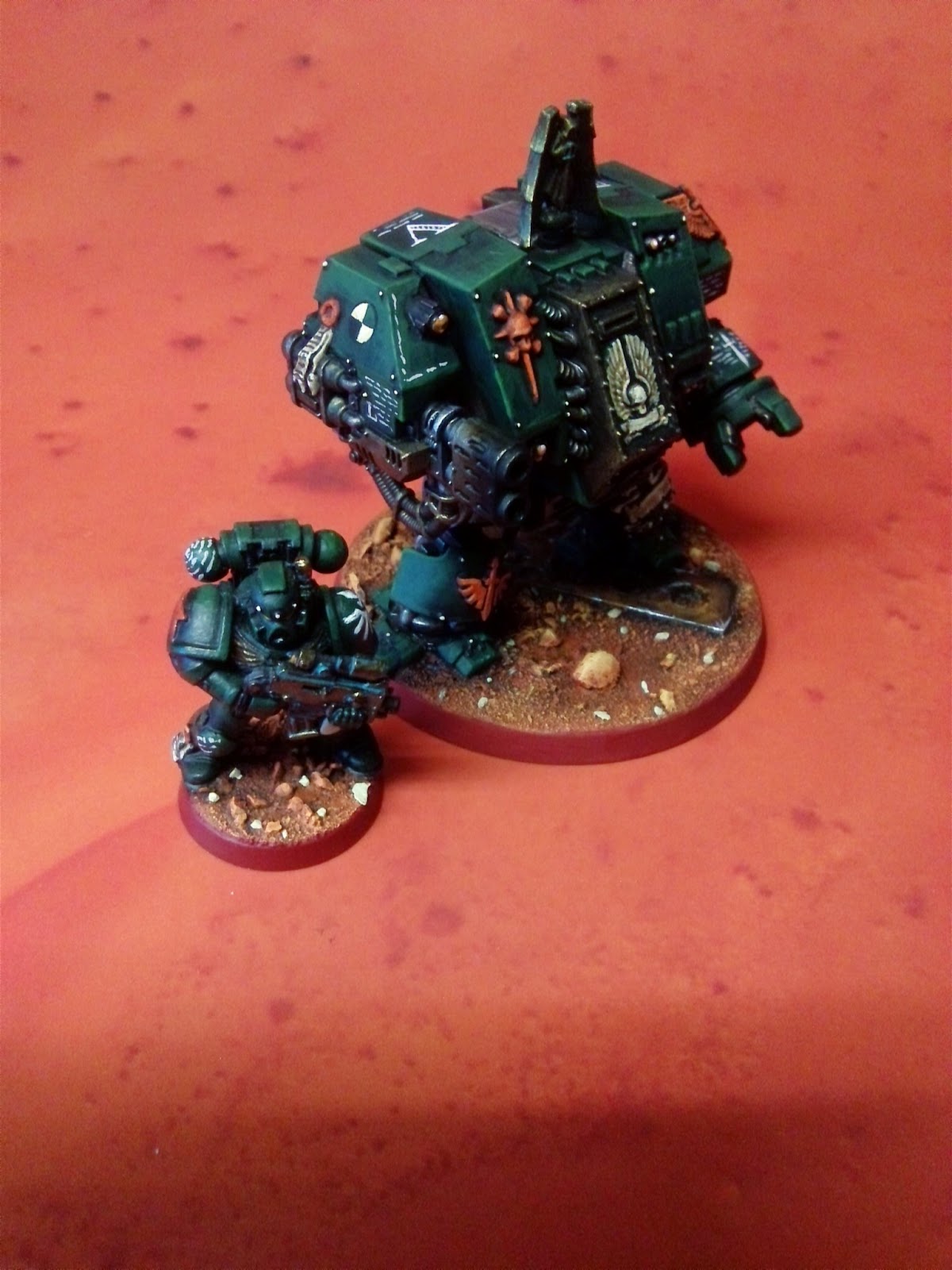 Here you can see him alongside my Deathwing and Tactical marines, you'll notice just how matt that Anti Shine came out. It's a funny paint in that it can be uber matt or even shiny. This time it may be because I might have laid it on thick, it actually took around 18 hours to fully dry. 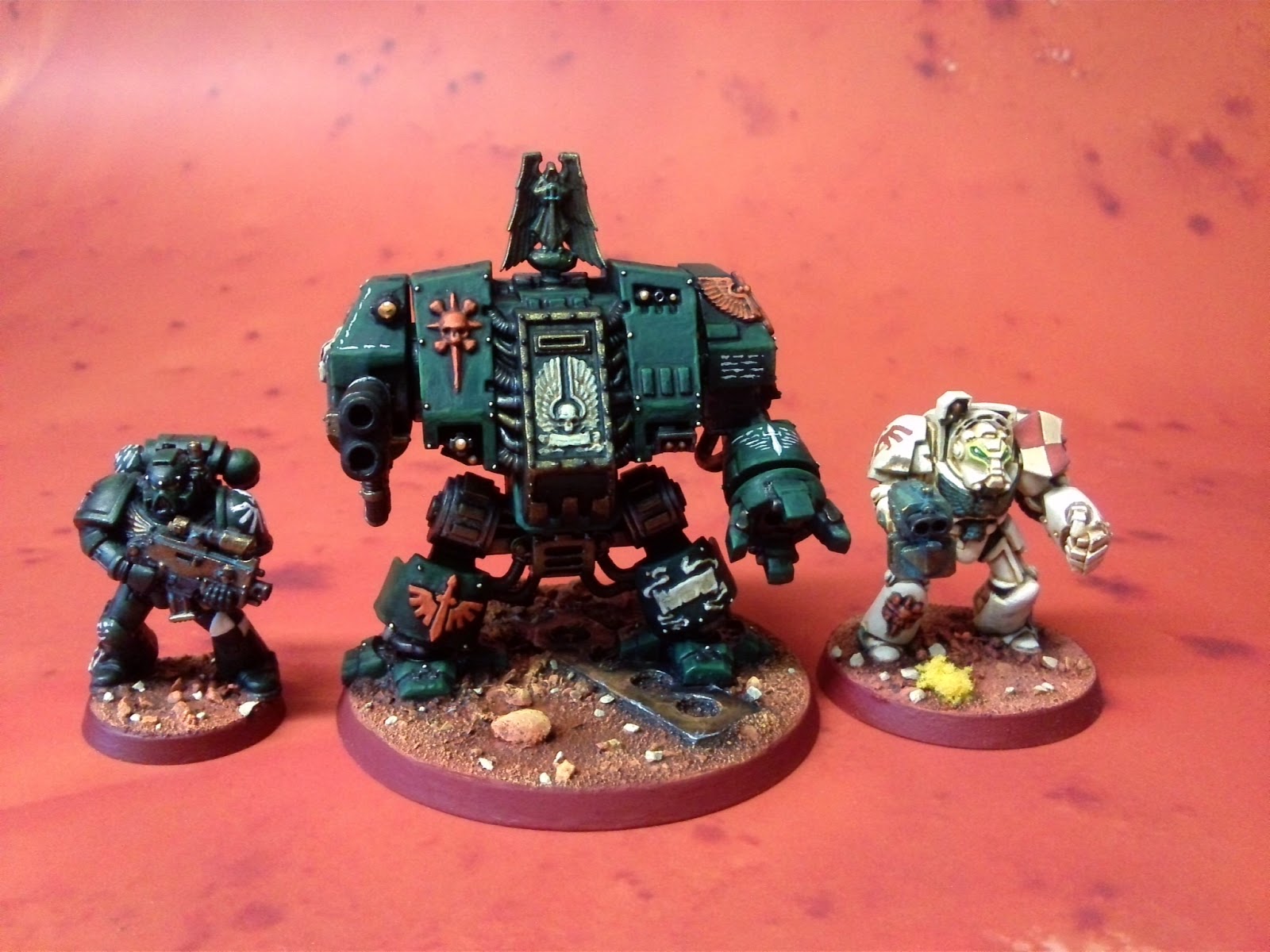 It's not a 100% match in greens but hopefully with the rest of the guys it will all fit seamlessly together. 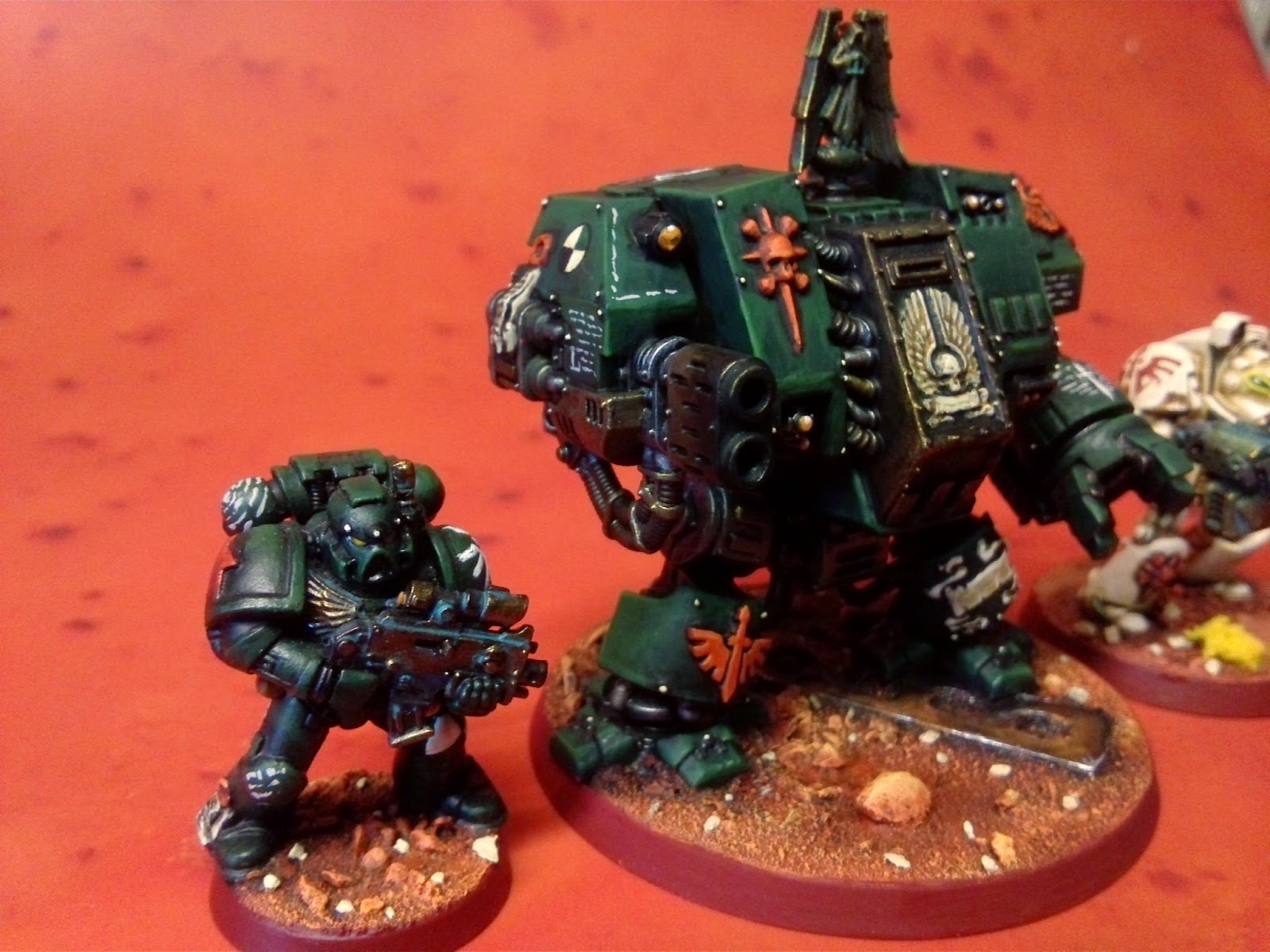 It's difficult to tell which is the more accurate colours . 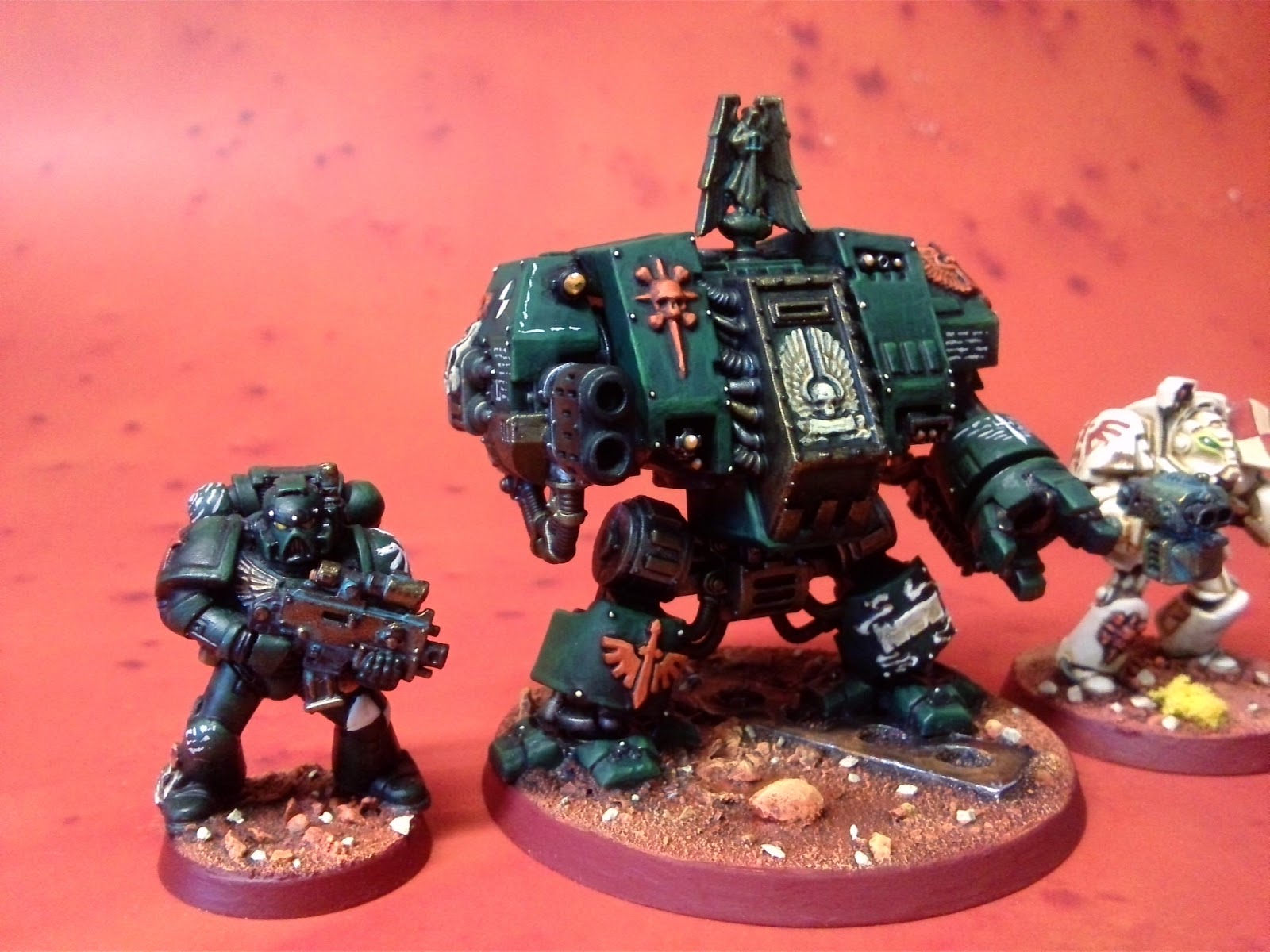 More pics of the 'happy couple' ;) 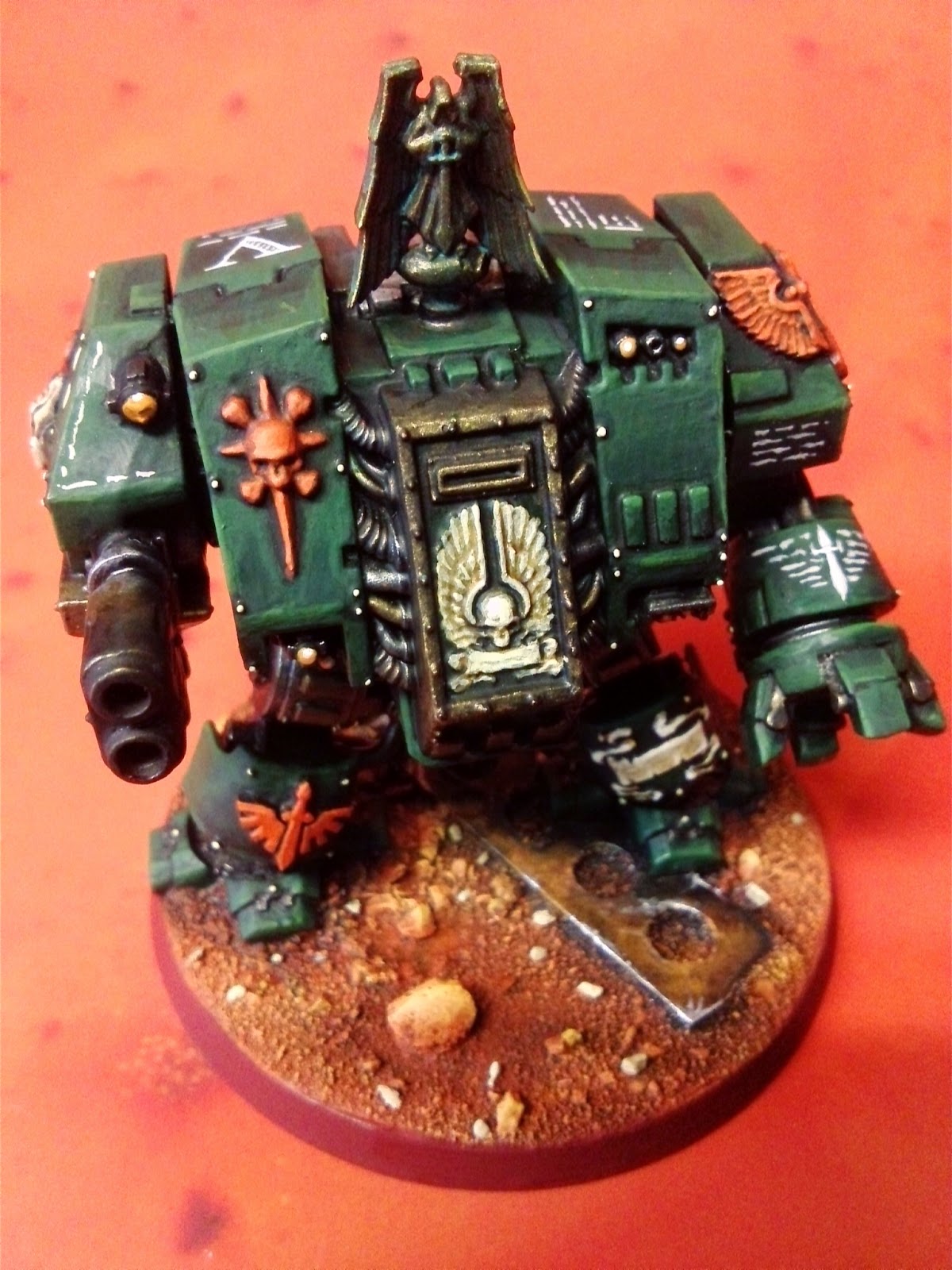 This is what happens when you stay out in the Ferron badlands too long the UV radiation and sulphur-rich atmosphere tend to make your vision just that little bit jaundiced.

Interestingly I found this filter on my phone cam that removed the yellow in certain areas, makes Dark Angels quite interesting in blue, don't you think?

Here's my big blue tick, for finally getting it done! More importantly it's something crossed off my To Do List, which actually looks a bit pathetic given only 6 of 20 items have been done. I'm sure come the reckoning day I'll have made up for it somehow and certainly getting something finally complete that's been on every list I've created thus far is a big deal. I now have 490pts of Dark Angels painted.

Meanwhile I've 12 bases to paint, which will make 36 bases I've painted since Throne of Skulls. Then I'll be adding some green to all my Tactical and Devastator squads but the primary concerns will be my Dark Vengeance Librarian, I need a HQ and getting my Lictor and Carnifex ready for Blog Wars 7.
Posted by 40kaddict at 12:31