Here we go, Old Skool/Nu Skool Razorback is complete. I don't actually think I paint these tanks well, but I do think they look effective. 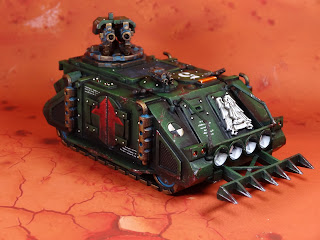 Certainly I'm happier  with these than I ever was when I was struggling to paint tanks first time around. I always loved this as a silly kitbash - the side railings repurposed to make some 'off-road' framework to secure the lighting rig to. 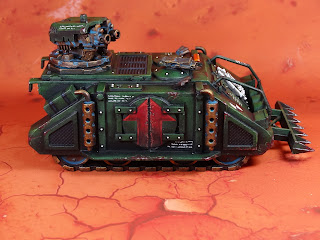 The weathering was a little restrained, as was the Predator. Unfortunately I didn't do a side by side comparrison between the two. There is a very subtle difference between the greens but not enough to worry about. 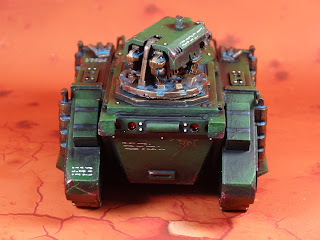 As much as I like Dark Angel tanks that have huge chapter logos on I've been very minimal to retain the overall green where possible, we don't want what's happened to my green future container. 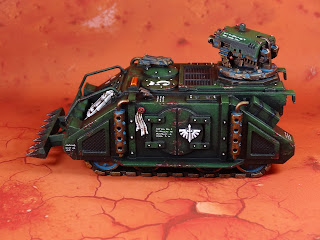 I like the orange lense on the top too, not sure if it's a light or a sensor but it broke things up a little bit. 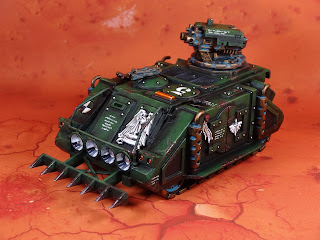 And here's the lighting rig. I added some pseudo-reflective elements in white and grey inside. These 4 'cups' are actually tracking pins from Space Crusade. I pulled the pins out and I've stuck craft gem stones in to make the lenses. 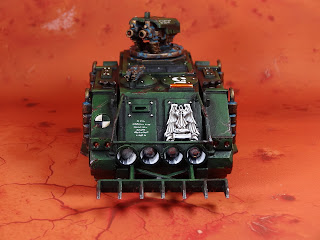 I was dubious about using PVA or Super Glue to stick them in place an was convinced UHU all purpose would work. Unfortunately I put too much in that one on the left and it's gummed up the genstone pretty poorly :( 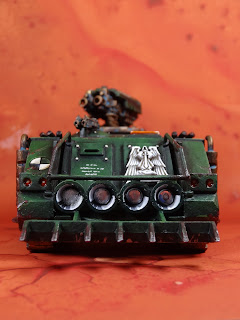 The stenciled 5th Company number came out OK too. 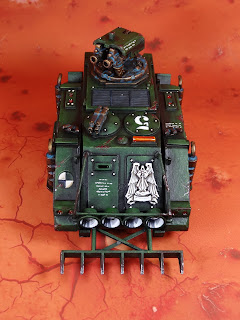 And on white backgrounds for the purists. 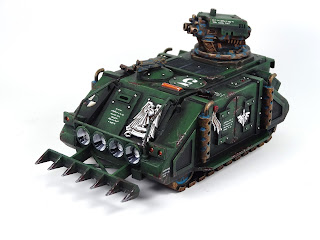 The Tactical arrow saynbol was just something I had to do. I had thought of a big 5 because, well you know my rule on big numbers... 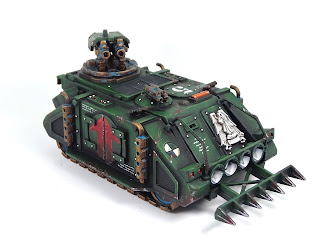 But that big white number would have tipped the colour balance and I needed something red so it was still a 'dark' Dark Angel vehicle. So the arrow was the perfect fit. 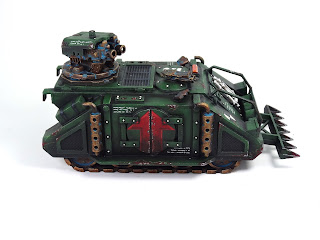 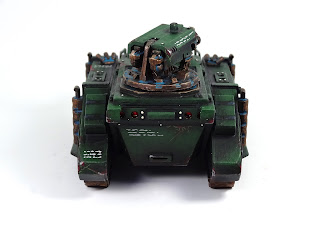 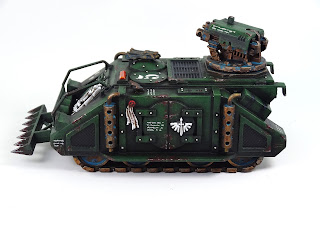 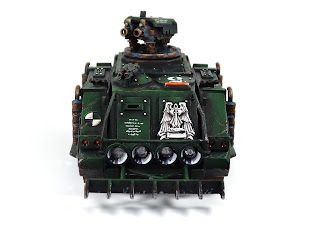 And here's the Las-Plas turret, which I've only just discovered is no longer an option. I suppose I could always use it as twin Las Cannons but a big disappointment as I much prefer the look of the gun. That said I'm far more likely to run Heavy Bolters and as I don't have a need for a second turret because I don't have a second Razorback, it's not really an issue. No doubt it'll find a use one day. 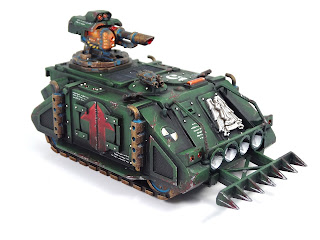 For now, here's my Big Gamboge Stamp of Approval, I've a few Camera360 shots to share too which will come eventually, no doubt lots of other things coming up ahead of those as the Season comes to a close.