GT3 is fast approaching and although I now have a list I'm happy with, in principle, I'm yet to try it and see how Hive Fleet Adaptations and stratagems work with it.


The low down:
I'd been advised to taken Kraken as my Hive Fleet for the 3D6, choose the highest for Advance and Fall Back and charge ability for all models. I was sceptical as with 8/14 'deep strikes', six of which would benefit from a charge on arrival, Behemoth's re-roll charges seemed more beneficial. 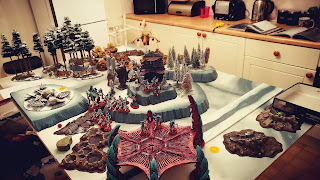 I committed to Kraken and took the Chameleonic Skin Relic on my Tervigon. Now, you may notice I said 8/14 had Tactical Reserve status and I must delpoy half on the battlefield. I did, my Hive Tyrant Warlord was on the Skyshield but took Alien Cunning as my Warlord Trait and re-deplyed him into reserves so as to deep Strike. Again I asked online about this, the majority consensus was it was a legit move, even when I suggested the FAQ about 'changing locales' in deployment might be pertinent, they suggested it was OK. 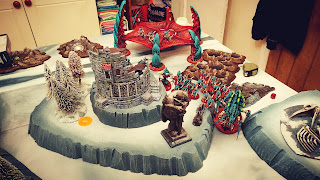 After my last pasting at the hands of the Astra Militarum I was a little apprehensive and with more than half my army off the board I was filled with the dread of everything being wiped out but with more LoS blocking terrain this time there was really only two exposed targets... 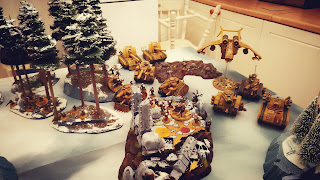 My Tervigon took the brunt of the shooting alongside the Termagants and was popped. The Chameleonic Skin at least meant she took a whole lot of direct firepower to put her down. Of course Ben also had a whole lot of indirect fire and the Wyverns and Basilisks managed to take out two of the Hive Guard and left me with just one Termagant who staunchly stayed where the Broodlord told it to. 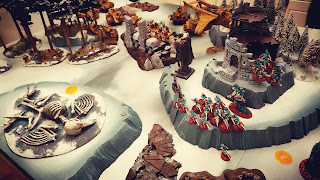 Ben closed out turn one holding three objectives and First Blood for 3 VPs. My movement phase was pretty short - I moved the Broodlord towards the centre and the Termagant inside the ruin. The Tyranid Warriors shuffled along the Skyshield to get a bead on the Vendetta. 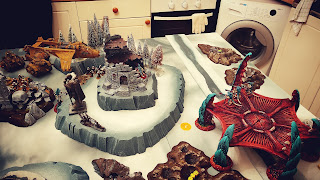 Ben had tied up his backfield so I could bring in any of my units behind him and I wasn;t much better off deploying in the midfield. Trygon and gaunts were on the left to take on the Ratlings [whoopee-do]. Rippers secured the objective, Genestealers were in the centre. 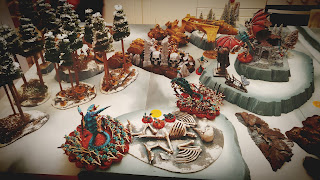 Hive Tyrants where alongside the ruin and on the far edge next to the trees, aiming for the Wyverns. Shooting wise I didn't have very much to do. I couldn't fire the Termagants at the Ratlings as I needed them to be in charge range and any casualties would leave me stranded. The Warlord Tyrant took the guard unit by the ruins down to two. 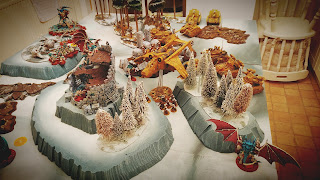 Trygon and Termagants made their charge on the Ratlings and we took them off as there was no chance for them to survive. I consolidated the Termagants next to the Leman Russ to force it to Fall Back next turn. 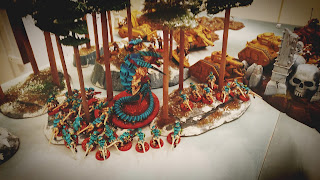 I'd managed to kill some of the guard on the Chaos altar but the Broodlord scythed through some of the rest and killed the Wyrdvane Psyker which allowed me to use Feeder Tendrills Stratagem to regain the 3CPs I'd already used so far. Unfortunately nothing else made their charges - Genestealers, Trygon or Fylrants - Behemoth's re-roll charge move looking pretty handy at this point. I did come away with 4 VPs for being on objectives though, so we were all even. 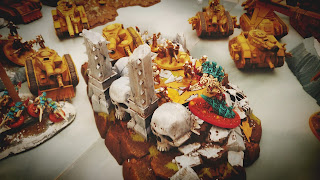 Ben's turn and he killed my Trygon, took my Warlord Flyrant down to 6 wounds, I think the other Flyrant was wounded but only slightly. The Basilisks then focused on the second Trygon and managed to kill that as well. Ben came away with just 2 VPs this turn. 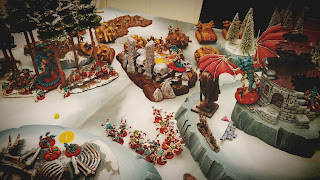 Sadly I didn't take any more pictures, but it was the last turn. I multi-charged the Leman Russ and the Guard Heavy Weapon Team with my Broodlord - typically getting overwatched on it's last wound, luckily the inuvl save was re-rolled and it dodged the autocannon tying them both up. The Termagants charged the second Leman Russ which allowed the Genestealers to multicharge both  Leman Russes, without being overwatched. Combined assault managed to strip a fair few wounds off them and then I spent 3CPs to attack again but I just couldn't do enough damage on the tanksand it was 12:30am at this stage and pretty pointless to carry on.

We called it and I had 5 VPs added to my score but another turn would have seen Ben wipe me off the board. It was a good learning experience and I've certainly got room for thought. The Skyshield did serve a purpose for board control and holding objectives so I'm far from disappointed in choosing it. Kracken is a definite disadvantage for the charge and I will be switching to Behemoth because I need to be assaulting and the 70% chance of the Trygons and Flyrants getting into combat is essential. The Genestealers and Termagants will make it on around 56% but they're less of a concern.

The least effective thing in my list? The movement trays - they're practically unusable. They help me get my unit onto the board and then they don't fit around the terrain and I just ended up abandoning them. A sad waste of money, time and effort unfortunately. I'll probably end up drilling a whole in one of the spaces so I can pin them to my shed wall as decoration :( Nevermind, a decent game but a much better learning experience, I think for both of us. Ben's army is fierce and he has the stratagems I think we agree it;s understanding the tactical mechanics of the game and being 'au fait' with your army that's the next challenge. We'll get there though :)

If you're interested in any more of my Battle Reports, point your cogitators here: www.40kaddict.uk/p/battle-reports.html
Posted by 40kaddict at 12:14