Game 2 of GT3 and Morgan Cole and I have been asked to play live on Warhammer TV! I obviously had to concentrate a lot on the game so pictures were taken only sparingly and I'm a bit shaky on what happened but I'll be going back over the Twitch feed to try and recollect but I'm only part way through so far. Either way if you have a Twitch subscription you can watch the game here: https://www.twitch.tv/videos/229954502


The low down:
Aside from the honour of being on Warhammer TV and the achievement of my dream I was almost totally unprepared for the enormity of the game. I had tried to split my army into three on the drive down to Nottingham so I had a start but I just could make neither head nor tail of the mission. I was allowed to deploy the Skyshield regardless [no one could reconcile how Fortifications fit into the deployment so they just made a decision there and then] and luckily I rolled to start with my first third - which I think was

I deployed the Hive Guard in the ruins to shoot at anything heading towards the centre objective. The Skyshield sat on the other objective. I was lucky that both Trygon's arrived as reserves, with their tunnel buddies. On top of that my Warlord Flyrant. 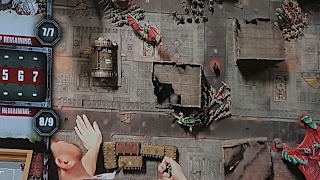 Tervigon and Termagants swarmed to secure the centre objective and then in the midst of everything I totally messed up shooting the mob of boys with my Devgaunts. 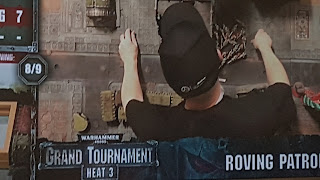 When I came to the Genestealers and their charge I suddenly realised Morgan had deftly removed all the nearest model and a 9" charge was now 11" at least! I failed charges by all on both flanks. 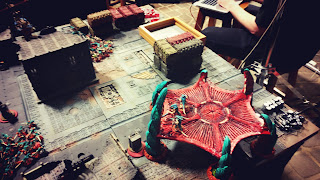 I was feeling totally out of my depth and then Morgan brought on his reserves, a second truck and mobs of boyz. 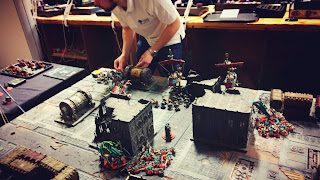 The Boyz swarmed the Genestealers and at least I had the sense to kick off with Caustic Blood, knowing just how many hits these guys have. 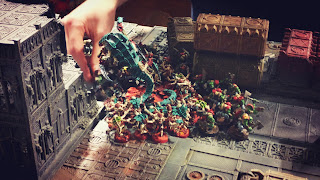 And they stayed true to form and managed to butcher the lot of them and the Trygon too! 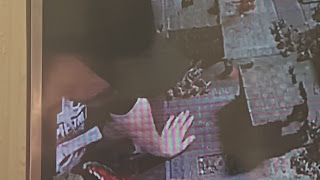 Morgan then unleashed a second stroke of tactical genius. Alongside his second mob of Boyz he brought on a Painboy [or Weirdboy, not sure] behind storage tank No.31. He was out of sight of the Devgaunts and so charged. In 8th you can charge without Line of Sight and ironically you cannot overwatch without it! Which I think is the opposite to 7th. So he made the 7" charge on the Devgaunts - tying up all 25 Termagants and was safely able to bundle the remaining Mob of Boyz in without fear of overwatch! 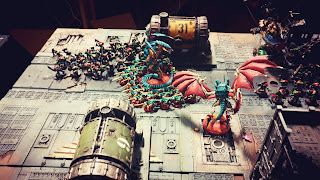 A genius move I couldn't help but admire, even after all the Termagants were butchered. The Termagants in the centre also took a pummeling, losing 11 of their number but I replenished 10 of them in my turn thanks to the Tervigon. 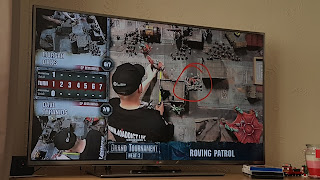 I think the Warlord Flyrant was down to around four wounds so I retreated to use his Devourer shots on the big Mob. Meanwhile the Trygon charged one of the Trukks. 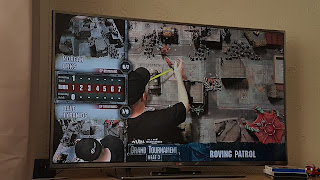 Which looks like it got smashed only to leave the Trygon surrounded by disembarked grumpy Orks, angry at the loss of their boat. 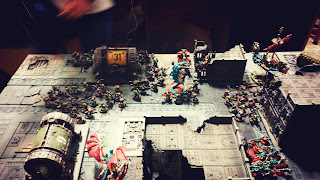 Moar Mek Guns arrived with the last of Morgan's army and the mob on the right flank decided to solve the issue in the centre of the board. 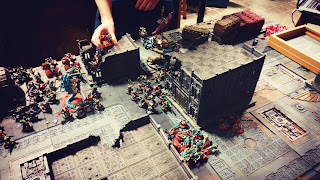 Morgan then cast Da Jump - Perilling in the process as his Weirdboy dumped 20 Orks in my deployment zone. 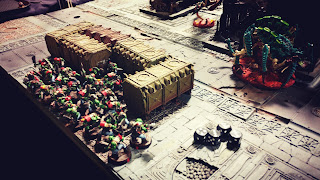 Boyz start butchering Termagants, I think I employed Caustic Blood again, I'd brought my Rippers on too to throw in and add to the numbers holding the objective. 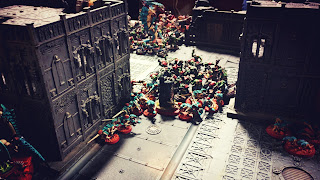 Da Jump Boyz manage to make a phenomenal charge against the Hive Guard. Unsurprisingly they are cleaved up like kebab skewers 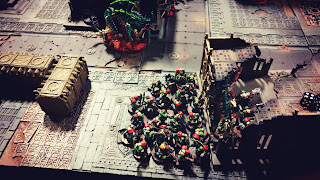 In response I bring the last Flyrant in and the Broodlord to whittle down their numbers. My dice rolling is appaling at this stage though. I can't get anything to do what I want, even Morgan begins to feel for my lack of success. It's reasonable that there are specific Warhammer TV dice - it helps them show up on TV and it means we're both using supplied dice, not our own [which is fair] but they are really big dice, something I was not prepared for and with relatively small hand not equipped for either, ha, ha! Ceri said the same thing afterwards. 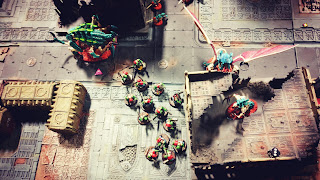 The Flyrant gets killed by the Tank Bustas and then a series of shots at the Warriors on the Skyshield manages to completely bypass the invulnerrable save and all three die! The battle rages on in the middle of the board with the Termagants being crushed between the Boyz they were in combat with and the Orks that had killed the Hive Guard and cleverly removed sufficient models from the attack of the Broodlord and Flyrant to be out of combat. 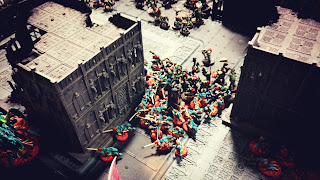 With the Termagants gone there was nothing I could do and we called the game. It was afterwards I found out I'd only scored 82pts worth of damage, and we'd only completed two turns. However, I realised my dream and despite the result on paper it was an amazing game, Morgan's tactics in particular raised the bar, hopefully something I will look into how I can apply also - charging from out of LoS for instance. 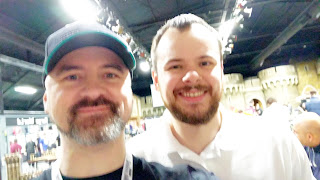 Anyway, a fab game and Nick and Ceri were super-appreciative of our efforts, so I can't ask for more. On to game 3!
Posted by 40kaddict at 12:10