First game of GT3 and I'm facing the spectacularly bearded Ben Briscoe and his filthy looking Orks made up of excellent Battle Wagon - Taurox Conversions and some of the artillery guns kitbashed from spare [looted!] Tau weaponry. As mentioned my recollection of the battles are really sketchy so I will do my best


The low down:
Skyshield and most of my none reserve deplyment on the board. I did not use Alien Cunning to remove the Warlord Flyrant, instead opting for Tenacious Survivor as my Warlord Trait. 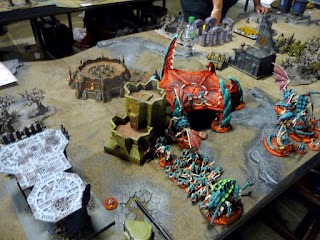 Orks tried to shoot me down but couldn't manage to get First Blood. 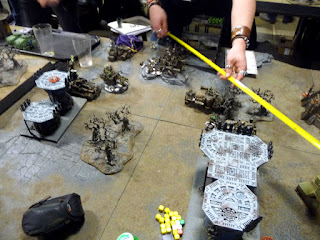 Ork War Boss channeling the WAAARRGH! - handy LED lights powered by a battery in the base. 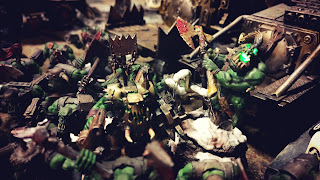 The other 'raving' Weird Boy with his glow sticks. 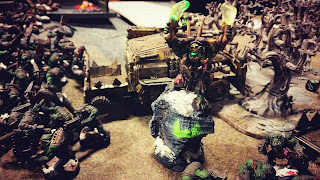 My turn and I used Metabolic Overdrive on the Tervigon to sprint up the board, followed by Termagants to hold the objective. Flyrant swooped on top of the foundry towers. 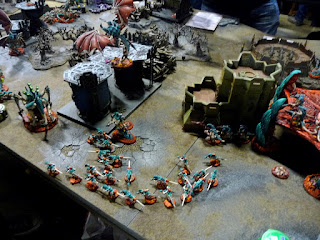 My Trygon arrived with the Devgaunts and my plan actually worked in that the Tervigon was now in range to buff them [re-roll 1's to hit]. The other Trygon and Genestealers arrived at the back of the board and the second Flyrant was inbetween them. 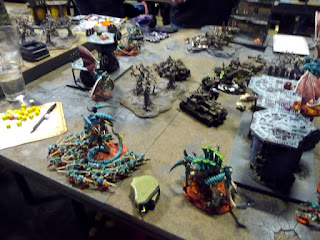 My Trygon made the charge on one of the Trukks 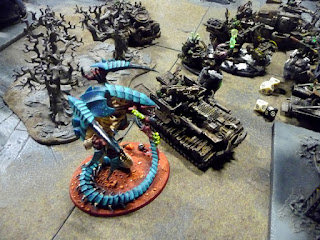 
... and ended the Trukk for first blood. I don't think the Tankbusters inside took any wounds and disembarked to the top of the towers. 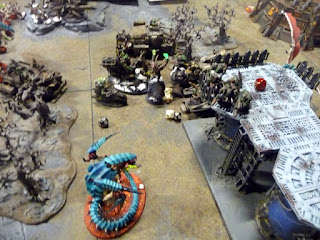 I swooped the Flyrant down to take out the Battlewagon 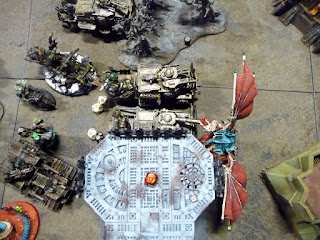 The Flyrants ill-conceived charge on the Battle Wagon resulted in taking 5 wounds for not much damage inflicted. 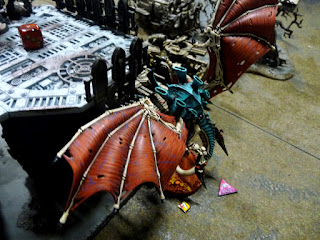 Genestealers made the charge on the Grots with the Mek-guns [?]. I wiped out a unit of grots so one gun was decommissioned, sort of. Second Trygon made the charge on another Trukk. Smashed the trukk killing a couple of Tankbuster inside this time. 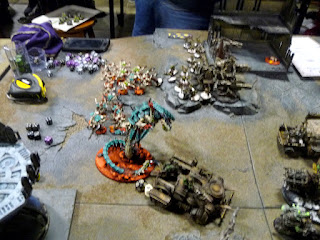 I don't know the name of the Ork biker Warlord but he led the counter offensive on the Trygon with a mob of Boyz backing him up. 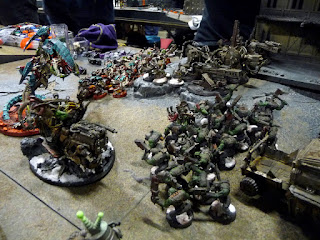 Weirdboy powers up the Orks with plus one attacks. 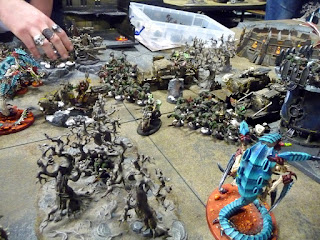 20 Orks get in doing 100 attacks! The Trygon could not stand against so many Choppas! 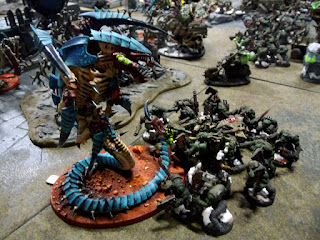 With only 5 wounds left the second Trygon also fell to the Biker Warlord. 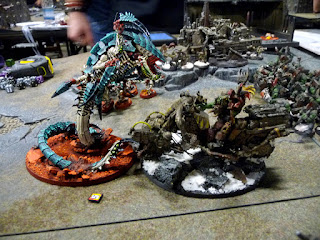 One of the Mobs charged the Genestealers 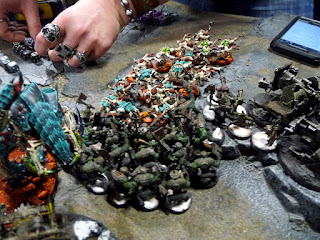 And managed to chop 16 of the 17 Genestealers into little pieces. Probably would have been handy to choose the Caustic Blood stratagem in this instance... 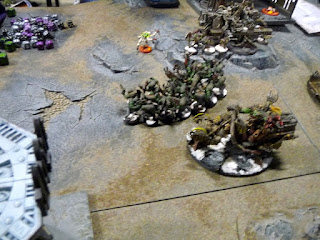 My remaining Stealer killed two in return but would die from battle shock. 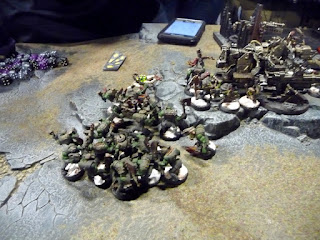 Boyz tried to chop up the Flyrant. 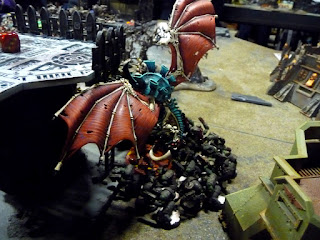 Which I think they must have succeeded as I don;t see him elsewhere. 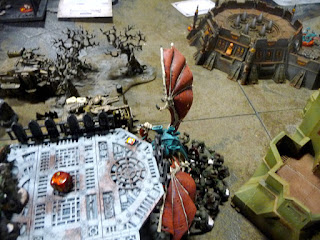 As time was running out we had got to turn three and Ben rolled to remove the two redundant Alpha Objectives, choosing one nearest his grots, one behind the Aquila strongpoint and one by my Felshborer Termagants. The Fleshborer Gaunt objective was the Alpha supply drop. With the mob of Orks having a party after killing the Trygon, they were unaware of the Tervigon and Gaunts about to spoil the fun. 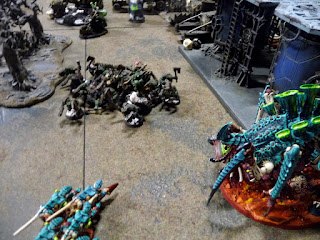 They bundled the lot of them. 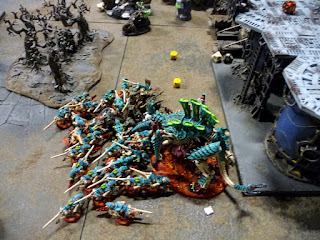 And killed all but the War Boss. 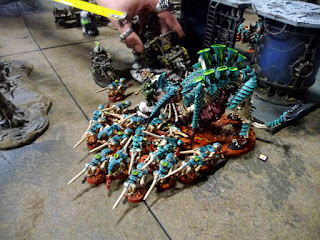 Fleshborer Gaunts finished off most of the Boyz who'd killed my Warlord in the shooting phase. 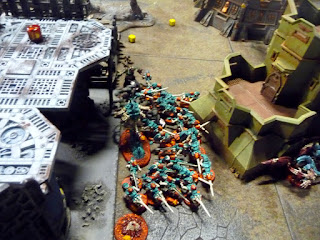 Then killed the remainder, while holding the Alpha objective. 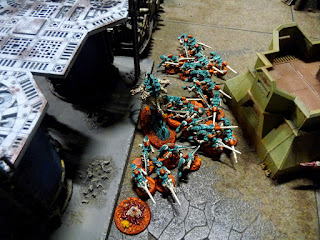 Weird Boy had headed for an objective but my Rippers had already cheekily been there before it was revealed it was not an Alpha. Battle Wagon headed for Line Breaker. 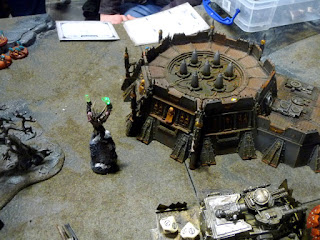 My Flyrant had secured the other Beta objective. But a squad of Kommandos came on in a last ditch attempt to steal it out from under the Hive. They would make the charge but Overwatch and my Monstrous Rending Claws would see them finished. 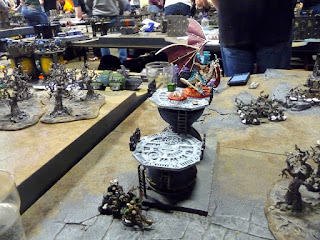 I'd somehow secured a victory holding both Alpha and Beta objectives. The fact I had been on all but one of them before the Alpha and Beta were revealed gave me the advantage in holding on to them. Ben was a great sport, patiently waiting while I confirmed the scoring nature of the Skyshield ahead of the tournament. I managed to to do only 609pts of damage though and lost a significant amount in return. 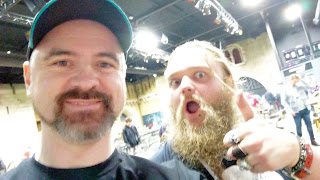 I think the Flyrant assaulting the Battle Wagon was a mistake but it stopped the momentum of the Orks at least. I'd imagine a completely different result if they'd driven unopposed around the board dropping the big mobs off on the objectives I was so tenuously holding. Hive Guard were shockingly poor though.