Bless me readers for I have sinned, it's been over 2 months since my last confession.

Once again I feel like I've been pretty productive, since my last 'Whats on my palette?' I was looking at:
And as you can see four of those were completed [although the Broodlord was not complete at time of writing], and painted from scratch [one was even built from scratch!]. The Predator too is almost done and the Fire Firs, Land Speeder and Rhino had some progress so I feel pretty good. Except for the 'post Christmas malaise' which I avoided until the end of January... Actually it's not malaise it's fatigue mixed with malaise. As I write this [22nd Jan] I've had a few 'nights off' to try and recharge a little bit, then...

That night and 23rd Jan I cracked on with Broodlord and completed it making me feel a whole lot better. Then the reality hit again and the Predator damage, coupled with no desire to tackle my Dark Shroud or any other item has brought me to a standstill again. It's far from ideal but I've a lot on my plate at the moment outside of the hobby, but also in preparation for GT3, so I'm not going to lose any sleep over it [in fact I went to bed just after 11 last night!].

Re-prioritising 'real life' is in part because I realised I actually have a lot of things already painted - too much in fact, so that they're just done and put in boxes. I definitely need to rationalise what I have and where I'm going with things. Not necessarily sellign things, just start thinking about rearranging the shed so I can store my finished items in such a way that makes them also accessible.

But I'm actually quite pleased with progress so far this season and in a week or two I'll be back to normal. One other thing I'll be working on is this Samurai from 1984 that I'm attempting to finish for the 'Eavier Metal Facebook group's 20 Year Challenge. The standard is always insane so I've no aspirations aside from taking part, it's just I've never tried before and felt I was missing out. 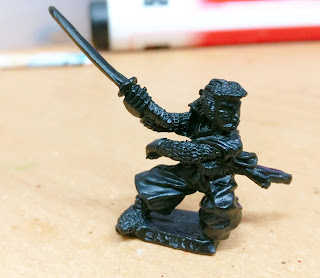 Sadly is also means I'm unlikely to throw my hat in with Squaduary. I've a Tactical squad that's 80% built but there is no way I can build the rest and paint them in one month with everything else going on. But give it a go if you're able.

So, I've a couple of further updates and perhaps I'll have kicked back into gear but right now I've those five things to think about and attempt when I get the motivation.

Email ThisBlogThis!Share to TwitterShare to FacebookShare to Pinterest
Labels: squaduary