As discussed progress has been less than forthcoming on the projects currently in the works. I imagine them like four planets in orbit that have aligned so you can no longer see through them. Ordinarily I might convince myself to tackle one of the onerous jobs - basing and such, and luckily I have all those trees to base [painting-wise]. But the problem with onerous jobs is there no real motivaiton to do them! 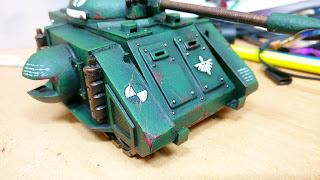 However, I did force myself to go into the shed around 10:30 and just try and crack on with battle damage on my Predator. I don't know why I was reluctant to do it but I went in with zero feeling or emotion. I appreciate that many will find this anathema to the 'enjoyment of the hobby' but as I've said many times before when you're painting alone you spend a considerable amount of time in your own head. This becomes a challenge in itself, if it wasn;t you wouldn;t see so many folk on forums and social media asking about 'hobby block' and loss of mojo. 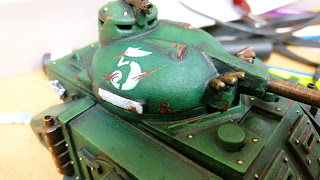 Couple that with the fact that I'm a functioning hobby addict, there are many times I don't 'enjoy' the hobby because I;ve become immune to the effects of the dopamine I get when I do well. That said there are always surprises and with numerous activities quite often when you are least looking forward to doing something the rewards are often greater because of it. 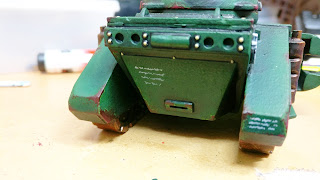 Anyway, what did I do? Well it's apparent now that I was reluctant to do the battle damage because I think I was worried it'd be too much like the Drop Pods or my Bastions whereas I felt the weathering should be more like my Imperial Knight. essentially instead of sticking to sponge weathering I should actually paint on the damage, which in tunr would be a longer more drawn out process which made it less appealing. 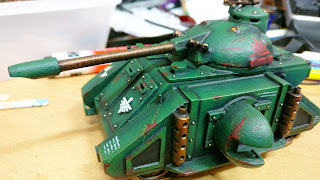 Ultimately I just stopped worrying, got out the sponge, some Rhinox Hide paint and dabbed on, but much more controlled than usual. I tried not to get the diffused 'spray' of tarnishing and used it to just get areas of damage. I then added some extra scratches with a brusch and neatend it up. This was followed by some addition of Khorne Red to look like a red oxide primer undercoat [althouth it should be a little warmer than Khorne Red, but then it'd be rusty looking and I didn't want rust on the tank]. 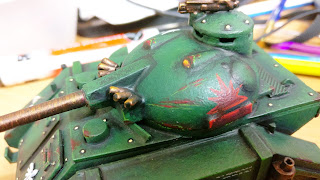 I then added some light green highlights to the bottom of the damage, something I didnDt do on the Drop Pods and Bastions but I did on the Knight. I think I have different weathering on all four of these models now which is a little frustrating as consistency across an army is key. But, weathering and battle damage is not consistent so I can rationalise the difference, it;s just you want the entire army to look the same. 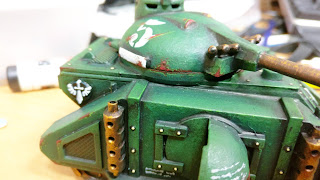 Regardless the results were great on their own, I completed most of it in an evening, which was beyond my expectations. With hindsight I think I should have consulted the Drop Pod and Knight prior to doing this, and the green highlights too for that matter as i tmight have proved an easier proposition - it's amazing how little I think to consult my own blog for tips to move things along. Perhaps I need a new rule to 'consult past projects before progress'. I always work that way in my day job, I've no idea why I'm so blasé about it for my hobby?

I had a few more nights off and then added some Verdigris to the bronze areas. I wasn't paying too much attention and having painted the tracks and exhaust realise I needed to glue in the Las-cannons and couldn't patina those until the glue dried. 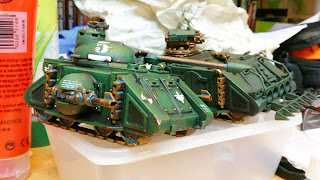 Next night I got the Las-cannons done, I'd also picked out some gun metal scratches on the battle damage, not too much. All that's left to do is the three Las-cannon coils in the middle of the barrel. Also the rear lights need doing, varnishing and its complete! 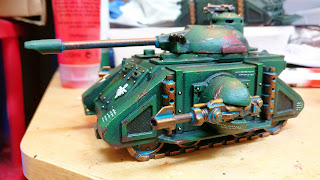 Which prompted me to start bringing the Razorback up to speed. 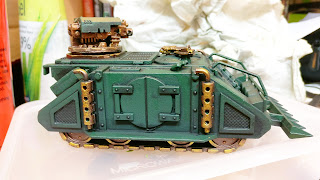 I only think this is additional shading on the green. 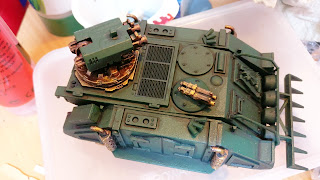 Which is starting look OK. Stipple highlights next and then glazing. 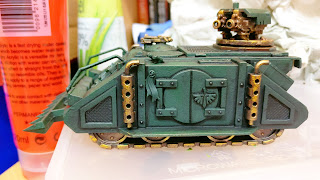