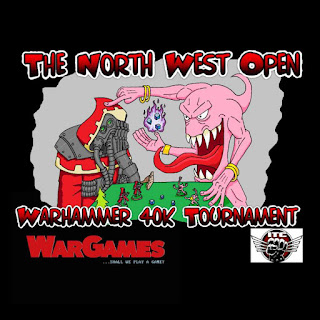 Earlier in the year tickets went on sale for the North West Open - the largest ITC format tournament in the North West [or wider UK, not sure]. This tournament is the brainchild of YouTube legend and all round good guy Aceface hisself, John Hickton.

As such it generates a lot of interest and demand for the 50+ spaces is unsurprisingly high, particularly from those who are after ITC points and other YouTubers/bloggers. You can imagine I was therefore unsuccessful in securing a ticket, but thankfully a couple of cancellations came along last week and for various other reasons I had funds and family support to throw my hat in the proverbial ring.

It's a two day tournament, 2,000pts but with 3 hours per game to take into account all the 8th rules gazing we're likely to do. Granted there are some who are going with a competitive mindset but I thought 5 games under such conditions will either make or break my approach to 8th. Luckily it seems there are a few casual gamers also attending and I think some of the recent FAQs have cleared up some of the [absolute] filthy lists that have begun to crop up.

I'll be taking the 'nids and given the way I've begun to observe 8th, my Fortification of choice will be... the Bastion! Points wise it's ridiculous, the Aegis would have been a better option, but it's really not much to look at. The Skyshield would also be cheaper and is undeniable as a centre piece but without confering cover saves [as well as it's reduced invul save] to those sheltering behind/underneath it I'm much more inclined to take my own LoS blocking terrain piece that is harder to destroy [T9] and has a Quad Gun to attempt to deal with Flyers [although 8 shots at 5s to hit isn't as good as when you could fire it with a single Zoanthrope with twin-linked :( ].

Anyway, the rest of my army is standard fare, just some Warriors, Malanthrope and Rippers added and made sure my Trygon was a Prime for the Synapse. It did mean I threw away my competitive advantage by swapping out the Swarmlord for a Flyrant though, it's almost as if I'm rejecting GWs attempt to help out nid players! I'll just have to see how it all plays out, but then that's the point. I'm a bit apprehensive about such a long weekend, it finishes at 8pm on Saturday and then 5pm on Sunday, but hopefully I'll survive it.

Meanwhile I've been adding some extra touches to my Genestealer Cutlists but nothing worth noting and this has somewhat impacted the blog. I'm hoping the NWO may kickstart my 8th interest, although I don't imagine in-depth battle reports afterwards, whatever we'll play it all by ear.
Posted by 40kaddict at 12:16