Game 5 low down:
Moving down the tables I was on table 26 with only one pair below me and my partner Colin Mill's Dark Angels. However, it turned out the two other players were 'no shows' and as such I'd managed to reach the bottom table - we were indeed fighting for the Wooden Spoon! The added bonus for me was seeing how Dark Angels fare in 8th. Colin had a vehicle heavy list [all lists are here], Razorbacks, couple of Predators, two Dreadnoughts and two Las Cannon Devastators with Azrael to buff his nearby units behind that ruin in the top left. 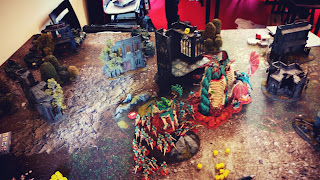 I got first turn and rolled hold objective 1 and 2 for Maelstrom which meant I could swap them for hold 3 objectives. It's a bigger gamble but the rewards were 3 VPs instead on a max of 2. It was doable as all three objectives were within [Death] spittingdistance of my DZ. I mean it was a competitive decision, I felt I had a 65-75% chance of success given the bodies on the board but failure would push me into Wooden Spoon territory. I couldn't ignore the chance, to do so would spurned the gift, so I went for it. 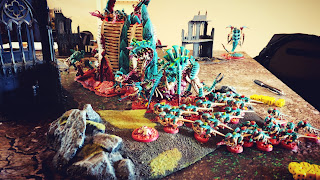 Flyrant and Carnifex moved on one of the Razorbacks, but no First Blood in this game! The Flyrant was spectacularly inneffective against the tank. He really needs a Melee weapon if I'm going to play him like this. I think further insult was added by possibly being killed by Colin in his following turn, he doesn't appear in any further pictures. 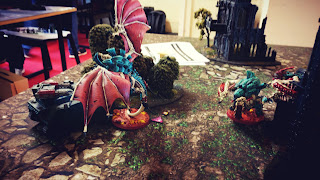 I thinned out the Devastators in the Ruins opposite my DZ but the 2 remaining wouldn't break. 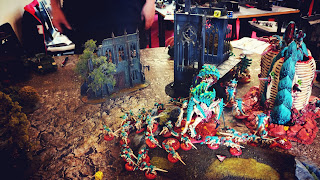 The returned fire by killing the Tervigon. Support from the Predators were surprisingly effective, their Auto Cannon was particularly brutal, propmpting me to consider moving my own one further up my 2017/18 Hobby Season To Do List. Unfortunately it wasn't enough to pull me off my objectives and I gained 3 VPs in my turn. 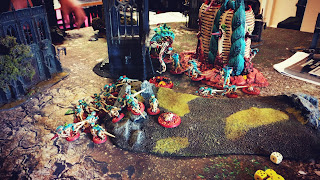 Colin had inadvertanly positioned his units in such a way as to make my Trygon tunnel really difficult to place. I coudl certainly put them down, just nowhere to take benefit of their deployment, with trees and choke points all around. However, I'd drawn objective 1 and 2 again so a second chanc eto convert that to 3 objectives. The odds were prety even in success now. Without the Tervigon the Trygon and Genestealers could soak up the fire while everything else secured the three objectives. 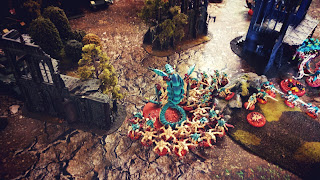 The Carnifex attempted what the Flyrant had failed to do and were equally unable to complete the task. The fact their Thresher Scyth tails is only S4 the reason for their inability to wound the tank. 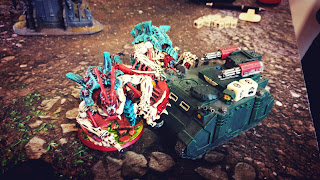 And therefore paid the price as the Razorback fell back leaving them exposed. 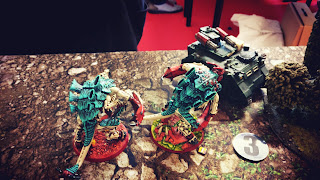 And one Carnifex went down. 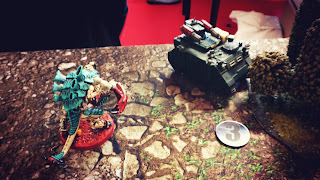 The Trygon Prime was also felled but my line stayed true and I was able to secure another 3 VPs in my turn. 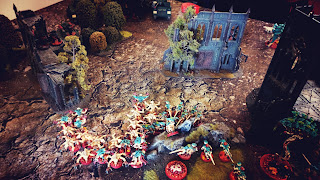 I drew hold objective 2 and kill a unit. I'm not entirely sure what went down in this turn 3 [our final turn, believe it or not]. I know I ultimately scored both Maelstrom objectives. I think the Razorback got destroyed, I couldn't quite get the last Devastator in the ruins and my remaining Genestealers tried to assault the two Razorbacks in the woods, not sure how many survived but the end of the game I'd won 8 VPs for Maelstrom [thanks to the three objective gambles], we tied the Eternal War mission on 4 VPs each and I got Linebreaker for my Carnifex while Colin Scored Big Game Hunter and Slay the Warlord - final score 13-6 to me - a win! 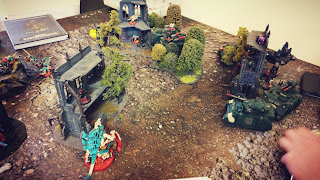 Because of the win I was out of the Wooden Spoon competition and I was convinced Colin had been successful but he actually lost out on that 'accolade' by one VP. I suppose it's no surprise to discover that Colin's experience was limited, this may well have been his first five games of 8th if I recall but his sportsmanship was awesome and such a genuinely friendly bloke, his kilt was also particularly special :) 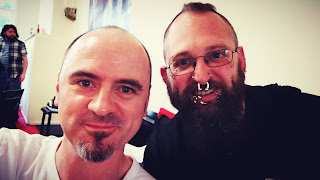 There we have it, five games, one win, about right and Martin [owner of Wargames] did say, with no disrespect, that I'd found my place. The third floor was by far the most relaxed, even Aceface said it got progressively tense the higher up the tables [the lower down the building]. Every game was a treat, every player was a true gentleman of the hobby and as you know I did come away with Best Army and £50 to spend which will cover the Tyranid Codex and perhaps go towards an Exocrine if they ever return. 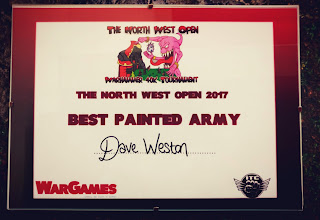 I think as a 'make or break' for 8th it's been apparent in my reports and comments that I still have reservations. It's such a change that it's clear I can't continue to play 8th as I have 5th, 6th and 7th. Bottom line Tyranids are competitive and I currently am not. Whether getting better at the game can be achieved without that need to be ruthless that seems to predicate success I don't know.

The ITC format was interesting in the Maelstrom missions only scoring in your subsequent turn - this certainly led to some tactical thought to ensure you would still score your points after your opponents turn. But beyond that I think tactics in general have taken a huge hit. I keep referring to the first turn - regardless of missions it seems you have to decapitate as much of your opponent as you can because they're sure as hell going to do that to you. Once you've blunted their force you have room to deal with whatever tactical missions are on the cards.

I confess I'm not sure how this is different from me always striving for First Blood. but that can be achieved with just one unit, however small and a wrecked Rhino isn't exactly ruining your day. Purge the Alien missions have always been my least favourite missions but it seems like this forms the core introduction to how 8th games pan out. Maybe there's a little more finesse I'm missing because I'll admit my grasp of how to approach games is sorely lacking. But this is still coming to terms with 8th and so long as my mates are still invested and I'm still having fun, which the NWO provided in abundance I'll be there. Next stop - Nevermind the Blog Wars.
Posted by 40kaddict at 12:03