Game 4 low down:
Day two and after three losses I moved down to table 26, but I was so happy as it was Red Planet BASE! It would transpire my opponent was a 'no show' and as there were two missing I was matched against one of my Double Trouble 2 partners and Birthday Bash Veteran Rob Nathan. However Rob was not bringing his White Scars this time, he'd brought TANKS! and bucket loads of them, including a Shadow Sword! With such a destructive weapon on the board I didn;t see much point in putting the Hive Guard in the Bastion. I assumed as it was such a big target it would be knocked down pretty smartish. 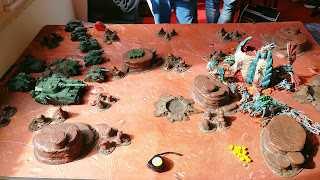 So everything huddled behind the hills, if not in cover at least attempting to be out of sight. Unfortunately not out of sight enough as the Bastion was ignored and the Shadowsword put it's shooting into the Tervigon in Rob's first turn. 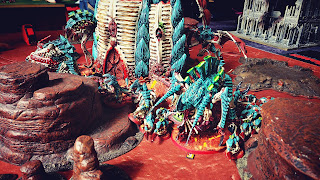 Luckily it's weapons weren't quite fired up and the Tervigon survived on three wounds. 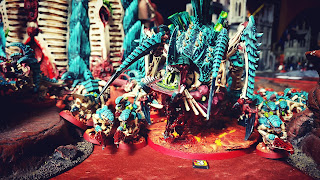 The rest of his tanks drew their aim at my Carnifex. 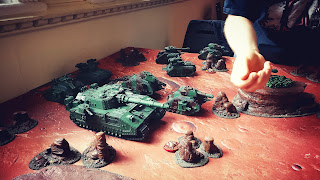 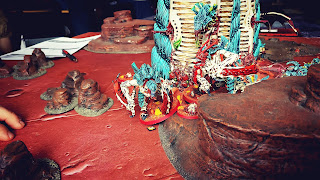 and then the last three to score First Blood and most likely a Maelstrom point. 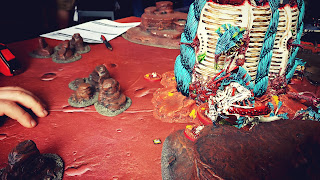 My turn and I had to hold Objective 2, just in front of the Bastion and kill a unit. The remaining Carnifex Advanced, supported by the Flyrant. I targeted the nearest Leman Russ think I managed to degrade it to just a few wounds but ultimately couldn't complete my kill a unit Maelstrom mission. 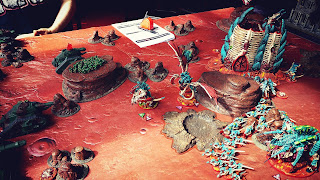 The Tervigon and Termagants also Advanced, with the Brood Mother replenishing any casualties from the first turn of shooting. 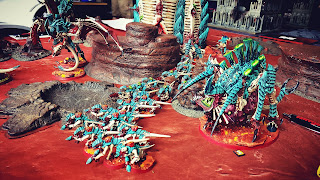 But their progress did not go unnoticed and the Tervigon was shot to pieces. 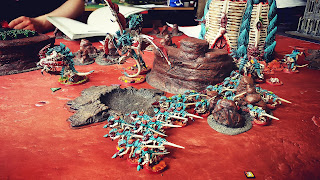 The Carnifex too was judged an immediate threat and reduced to 2 wounds... 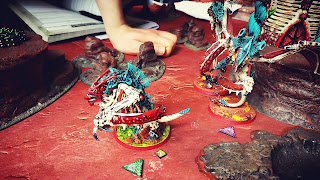 and then none like it's sibling. My push forward was being blunted pretty effectively. 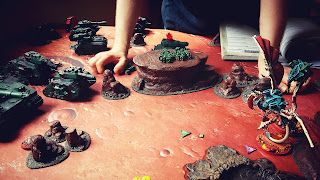 With less threats on the board Rob had opportunity to focus on the Bastion, stripping 13 wounds off it! 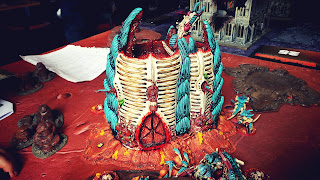 As my assault diminished I tried to hunker down, retreating my Malanthrope to bolster my defences and score both objective 2 and have 3 units and no enemy units in my DZ. I knew how devastating the Guard shooting could be and having the Bastion, Hive Guard, Rippers, Warriors, Termagants and Malanthrope gave me double the units I needed for a bit of redundancy. 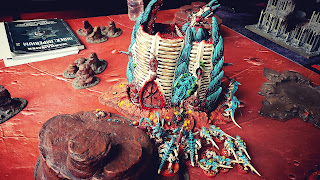 While my push forward added a further distraction when the Genestealers and Trygon arrived in their tunnel.
But before I sent in the ground troops the Flyrant tried to assault the super heavy but they were waiting for him and the Volcan Cannon overwatched him like an insignificant fly.
The Genestealers failed their charge and the Trygon need a charge of 8" to reach the Shadowsword and I typically rolled a 1 and 2. So I used a command point to re-roll the 1 hoping for a 6 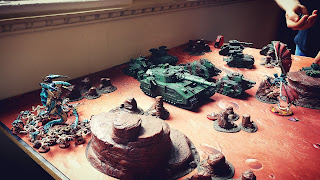 and only went and got it! 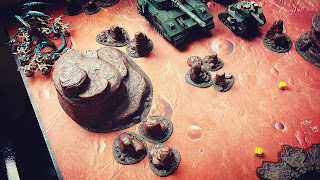 The Trygon managed to take it to 9 wounds, or do 9 wounds, not sure, but Rob said it was equal to the most amount of damage it had received in all the games, unfortunately not half as successful as it should have been. 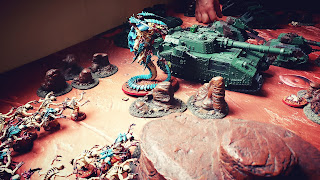 Rob retaliated by destroying the Bastion. 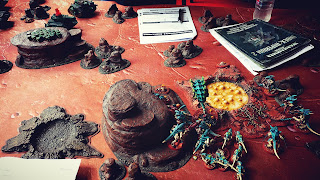 The reveresed out of the combat to shoot the Trygon point blank, then mop up the Genestealers with ease. 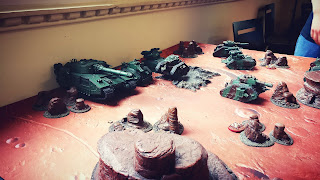 We tied for Eternal War objectives, both holding our own and scoring 4 points each but Rob had the Maelstrom mission for 8, First blood and Slay the Warlord for another 2. Final score was 14:4 another loss, but another great game and nice to pair up with Rob again. This is the great thing about the hobby and these tournaments, gettign to see the same faces again and catching up. 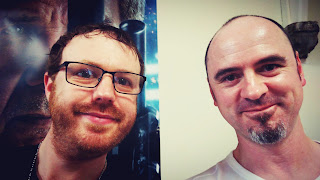 As much as I'm enjoying the games, at this stage I'm a little disappointed about how bad I'm playing. I don't honestly think it's the 'nids, they just feel like a tool I don't know how to use. I think I'm actually going to be in with a shout for Wooden Spoon which would be an achievement of some sort but although it might be coming across as 'protesting too much' about not winning the fact is I don't mind losing so long as I gave it my best and right now my best is pretty rubbish. Still, on to the last game.