You may recall this time last year I was actively sabotaging my Hobby Season goals by avoiding the Land Speeder Typhoons that were so close to completion. This year felt like history was going to repeat itself but it's fatigue more than mindless ambivalence that is putting my new goal at risk. I've managed to overcome the mundane nature of the cultists but unusually by abandoning any sense of a plan! I'm literally flitting from one element to the next without consideration of following it through to completion. That may well bite me at the end but it has brought renewed vigour and purpose. 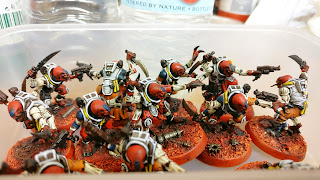 As such all the highlights are done, although I might want to add a few extra touches to the red 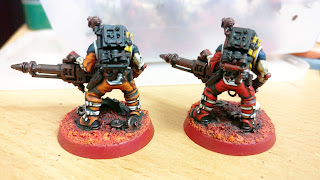 I then added all my Tyranid Chitin highlights and have waethered all the Acolyte weapons with Typhus Corrosion and Ryza Rust. 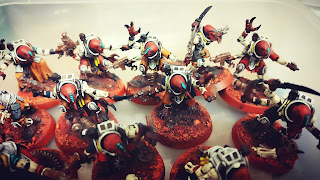 As much as the plan was to reach a point where I focussed predominantly on the Acolytes I'm still very much bringing the Neophytes along with them, they just happen to be a few steps behind in the likes of weathered weaponry... 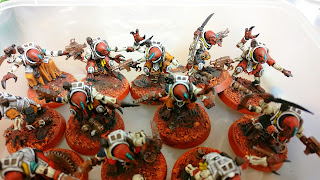 At this stage I should have been working on the Acolytes but given the potential obstacle of the variety of skin tones still to do I saw it as a bit of a challenge to highlight all those heads and hands. 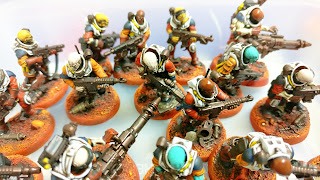 You can just about make out the highlights on the turquoise skinned hybrids, I carried it through with all of the skin tones, but I was less confident doing the dark skinned guys, not sure why, I think its the challenge I face every time I do it with the Dark Angels. 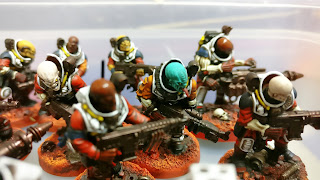 Having varied skintones was always going to be a problem reconciling with my hive fleet colours. I think I've managed it reasonably well but I also know this force is incredibly busy looking, an unholy riot of colours and variety. It disappoints me a little I wasn't able to make it more simplified but it does reflect the ragtag nature of the force at the least and if I wanted them all the same I've done that already with the Tyranids themselves...
Posted by 40kaddict at 12:15