Another boring task that needed addressing - Bonewhite chips on the bases. I'm not sure if it's apparent but I did try and do less of them, partly because it's so tedious but also because I imagine fewer wraithbone chips in and around the heavily industrialised areas of Ferron Proxima. Whether I have limited their inclusion I'm not sure. But I did put some Free Radical Collective logos on the kilted pair of Acolytes. 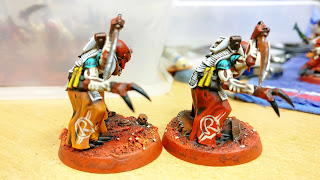 They came out really well considering. Not sure I'm going to do it on all the hybrids, space becomes limited and they're already busy as hell. 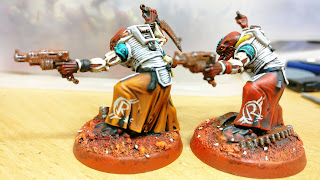 I also added all the blue highlights to their uniform. 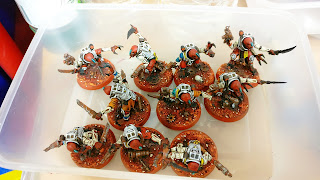 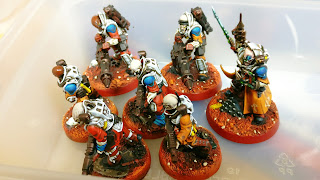 A few more highlights on the skin tones and subsequently added some groovy flushed, veiny back of the skull similar to the Aberrants, which have come out pretty well. I also painted ll the tongues red but flitted off before completing any of the highlights - highly unusual in the OCD way I paint. Eyes and teeth have also been done. 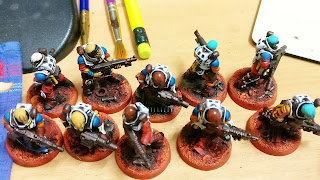 I'm not sure how consistent that sits with the Acolytes and Purestrain Genestealers though: 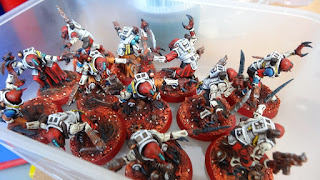 Maybe the purestrains have the bonewhite bit as a stronger substance, then with the first and second gen hybrids that material is replaced with all flesh [the red bits] then the Neophytes mutate the red skin into the natural skin tones of their heritage, with the skin covering the forehead crests, allowing them to blend in with the populace. The Abberants meanwhile are mutated further so the crests aren't covered in skin. Equally the Magus and Primus have exposed crests because of their exalted status and given they're so shadowy in the background they're never seen so their overt mutations are less important in exposing the Coven. 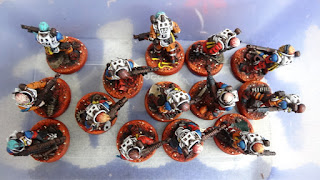 All that's left is claws, talons, anything black, all the little headlamps that have been started with some orange, toxic green elements and then the Neophytes guns need some work. Then base edges, varnish and all the other special FX - gloss varnish, Tamiya Clear Red X-27 etc. I'm almost certain these can all be To Done by the end of the Season but the blog posts themselves are struggling to fit into my current schedule, we'll have to see how that works out.
Posted by 40kaddict at 12:03