Game 3 low down:
Moving down from table 22 to table 24 I was matched with David Woods and his Necrons. Unfortunately I didn't take too many pictures so it's a bit difficult to work out what went on. Additionaly I think this was David's first ever tournament and third game of 8th edition so we spent a lot of time trying to get things right. I believe I won first turn but importantly you should note I totally messed up deployment. My big mistake was putting the bastion between those two ruins. In particular the two storey building meant none of my Monstrous creatures could be deployed inside as they had to climb up one side and down the other to get out as you can no longer 'pass through walls' by barging through with a difficult terrain test! Insead my Tervigon was forced into the single storey ruin on the left. Anyway, I drew Maelstrom objectives 1 and 2, which was possibly by my Bastion and where I brought the Trygon and Genestealers in, hoping to live to my turn 2. I was sure I killed something in turn 1 but it may have just been weight of fire into the Doomsday Ark to strip away all but 5 of it's wounds, at least it degraded a bit. 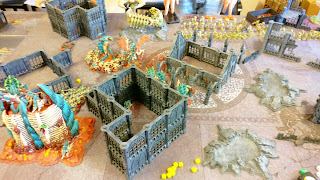 In return the Genestealers and Trygon were wiped off the board! This would deny me securing both objectives in my turn. The Flyrant was also wounded enough to reduce it at least one, if not two tiers of damage [they're really not that good, or I'm not using then correctly]. 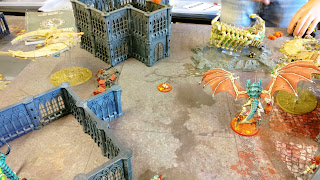 I scored my 1VP and drew Objective one and kill a unit. The Doomsday Ark was my best chance [even though it's Living Metal had repaired one of it's wounds]. The Flyrant swooped forward and I was able to take it down. Additional damage was wrought on the Warriors and Immortals. 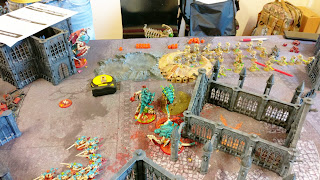 But most of them got back up again in their turn leaving me back where I started. 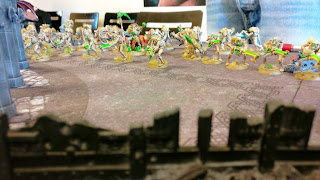 Unbelievably, considering my results, throughout most of the day my dace rolling had been obscenely good. Quite often statistically improbable, which made me wonder just how bad a results I could have had. This I think was a series of saves, FnP and Tenacious Survivor results for my Flyrant leaving him still on the board. 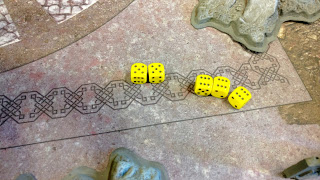 This gave the Flyrant the opportunity to assault one of the Doom Scythes, whose Death Ray was laying down all sorts of hurt with abandon. Unfortunately without any melee weapons I could only take it to 5 wounds left [which it would repair one - Living Metal]. Meanwhile the Carnifex and Malanthrope mad eit into combat but I couldn't kill a unit 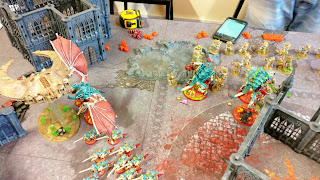 Flying off left the Flyrant exposed and ultimately it was plucked from the sky. I think my conga lined Termagants managed to secure me the Eternal War mission and I got Line Breaker by deploying the Rippers in that Ruin in the back of the board where they couldn't be seen [which is why I left them in there overnight!] I ended with 9 points but David got 11 with Line Breaker, Slay the Warlord and Big Game Hunter and the Maelstrom Mission win. Surprisingly my unit with the highest Power Level for Big Game Hunter was not the Flyrant, Trygon or even the two Carnifex but my Genestealers! 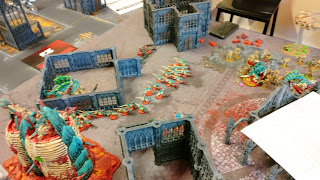 Three games, three losses but again a really good game and David and I had a lot of fun. I totally screwed up my deployment, which highlighted another problem with the way 8th works now. LoS blocking buildings/ruins are so important nowadays to actually offer some protection for larger creatures/vehicles, but those pictured above serve up a massive nightmare for movement. Granted creatures/vehicles have so many more wounds now that the idea of protecting them further seems greedy but they're still dieing in droves because heavy weapons are more destructive and small arms have chances to damage even when there used to be none. 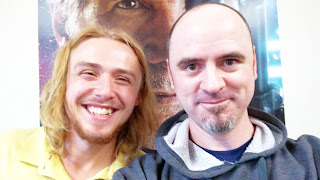 Anyway, it was a great game and I was ready for day 2, perhaps that wooden spoon could be mine...?
Posted by 40kaddict at 12:05