Game 2 low down:
Despite the loss I remained on table 22, which was actually rather convenient and I was up against Max's mate Steve Tiencken [the only Welshman in the tournament according to him ;) ]. Max had some Assault Cannon Razorbacks, Baal Predators, a Sicaran Battle Tank, a Fire Raptor :(, Storm Raven, various Tactical Marines and three Assault Cannon Tarantulas holding his centre [in cover] buffed by a Primaris Captain and Lieutenant [re-rolls of some kind for hits and wounds]. I won first turn and surged forward. 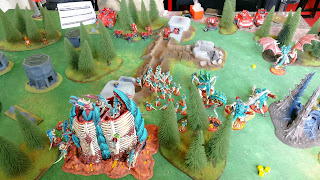 Tyrgon also turned up to draw some fire from the Flyrant. My target priority were the Tarantulas for First Blood and because I thought they would be relatively simple to kill while their survival would put out disproportionately high shooting thanks to the buffs around them. I succeeded but then found out First Blood/Strike was not a bonus mission in this scenario! Meanwhile I had to hold onto my two objectives in my deployment until turn 2. 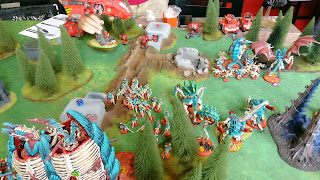 The Genestealers and Trygon did their job too well in Steve's turn suffring 19 Stealer casualties and 7 wounds off the Trygon. 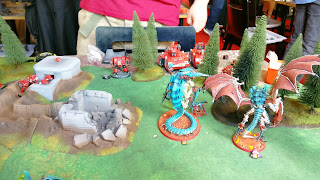 Then the Trygon took even more fire and was killed while the Flyrant was reduced to 8 wounds. 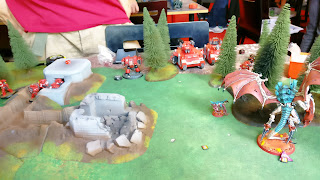 It took a further four wounds and then I think the Tactical squad got some shots on it and my failed saves, Catalyst and Tenacious Survivor failed to stop the remaining damage. 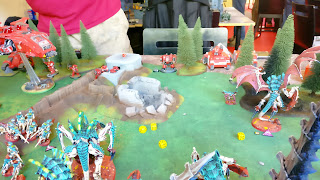 The Flyrant was dead for Slay the Warlord. 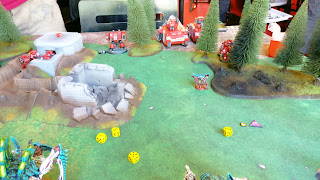 The lone Genestealer was then set upon by the Tactical Squad that disembarked from the Razorback. 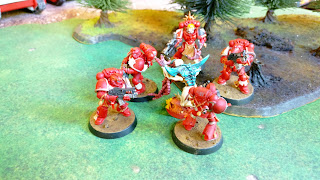 Teh Marines attacking first on the charge meant he could not survive the five to one odds. 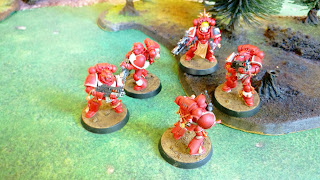 Not sure what I did this turn, clearly the Carnifex barreled forward and charged the Tactical Squad - killing them outrigh. I secured my Maelstrom objectives thankfully and with hold objective 1 and kill a unit I was halfway to scoring another 2 point sin my next turn. 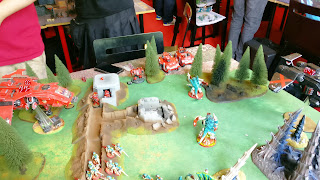 Steve responded by strafing my lines, killing the lead Carnifex. 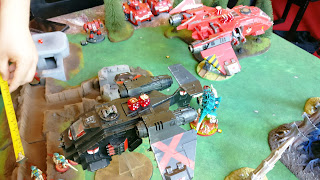 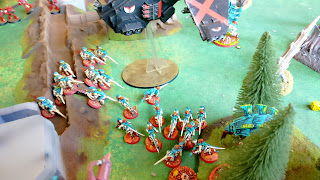 While the Termagants were whittled in numbers as I aimed to hold objective 1 while still advancing up the board. 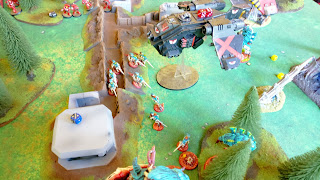 I gain my 2 VPs and draw Objective 1 and Kill a Unit again. I move the Devgaunts and Carnifex up and rain fire down on the Tactical squad in the trench - killing them for my next turn VP. 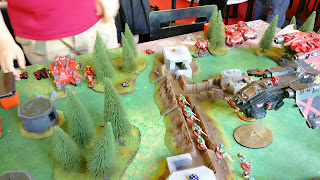 The Storm Raven moves off to the left but targets the Carnifex. 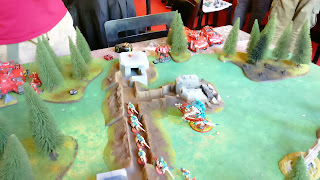 Shooting from the Fire Raptor combines to destroy the Carnifex and subsequently the Termagants. 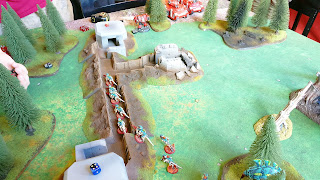 I gain my 2VPs but draw hold my objective 1 and Steve's objective 1. I bring the Rippers up in the trneches, hoping to sneak that enemy objective 1. All my Bastion, Quad Gun and Hive Guard shooting manages to bring the Storm Raven down [probably using a Command re-roll to do it]. 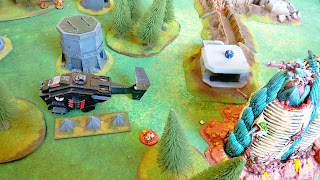 All Steve's shooting went into my Bastion, bringing it down along with one of the Hive Guard in the twisted wreckage. 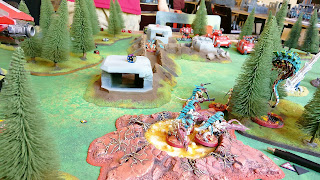 Steve then killed the remaining Hive Guard and most of the Warriors with the Fire Raptor. 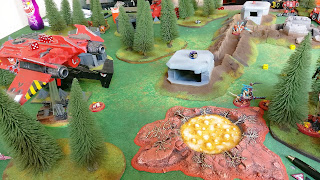 I may be mistaken but I think he subsequently killed everything left on the board - the Rippers, Malanthrope and remaining Warrior leaving me tabled. Not entirely sure but it rings a bell that it went down that way. Ultimately I scored 7 Maelstrom VPs but Steve had been more consistent and took the 8 points for Maelstrom, the 8 Points for Eternal War and potentially the clean sweep of Bonus Points to make it 19:0! Once again defeat and a score line that overlooks what hard won success I did achieve but perhaps reflects more what remained of my army. 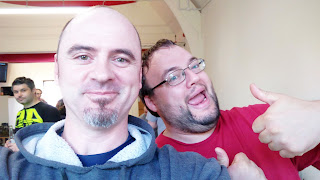 Again, no complaints from me. The Flyers were a challenge to contend with [I only managed to deal with one] and those Primaris HQ units were pretty tough but a perfectly decent list and Steve was a great sport and good fun. On to game 3.
Posted by 40kaddict at 12:07