I mentioned something about counting chickens... I know it's been over a week since my last post, don't worry I'm not going to apologise, I'm just going to blame Lewis Hamilton. I know it's not hobby related but I had the opportunity to go to the British Grand Prix the other weekend [it was a Christmas/Birthday gift] and in some respect the lead up, night away and nights after put serious brakes on my hobby momentum. To be fair though it was an unbelievable experience, I'm still recovering from the assault on the senses. 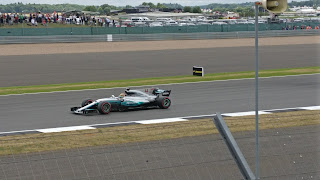 That's not to say I haven't been painting, I've done all the Stonewall Grey highlights and then all the white highlights. At this stage there were just five Neophytes left to highlight and the process had proved less than satisfactory. 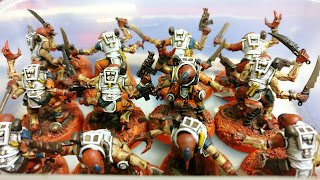 In my last post I'd identified picking out the ridges was less precise than I'd hoped but the white highlights might mitigate where I'd failed. Sadly that didn't quite bear fruit, most of the white highlights are just not fine enough. I really don't know what the problem is here. I think the Army Painter white I use is sufficiently thin, any watering down just results in the paint bleeding into the grooves. 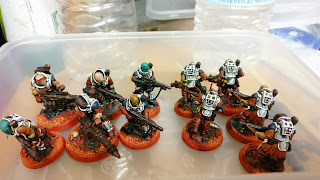 But even unthinned you can see it's far from defined. I was also beginning to struggle with my eyesight, trying to pick out the ridges and I think perhaps I've reached the the limits of my skills, which is a little disheartening, although I can live with it. 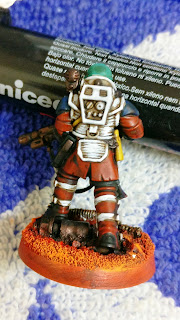 At a distance they'll look fine but given the time I spent trying to be neat I really hoped for better results. Adding in general fatigue and another forthcoming trip away even completing these before the end of the Hobby Season just became a challenge. I'm still going to work on both the Acolytes and Neophytes where possible but I'm pretty sure as the deadline looms I'll switch focus to the Acolytes - there's less of them and the Tyranid elements are familiar and so should be straighforward. 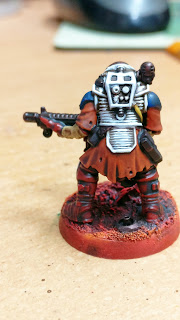 That said I'm far from giving up, I certainly don't envisage the self-sabotage to the 2015/15 Season that I did with the Ravenwing Land Speeders. I still think there's plenty of time to finish both Acolytes and Neophytes but eventually committing to one will most likely guarantee a success with a chance of completing both, rather than jeopardise the whole enterprise to complete both...