Game 1 low down:
First game and it was opposite Max Koch and his lovely Harlequins, now I hadn't intended to do a thorough battle report so forgive the fact I didn't get much of Max's first turn but it's clear those Venoms made some ground into the centre of the board and in the trees on the left. 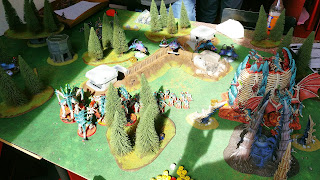 To which I totally got sucked into dealing with. I'm not sure if that was Max's intention but having put 9 wounds on the Tervigon I had to use it to deal with the nearest Venom but in so doing left the Termagants outside of it's range to reinforce and add rerolls to 1s on their shooting! My whole reason for it's inclusion dismissed in the first turn! 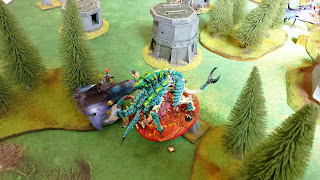 I did manage to get First Strike this turn  - the combined shooting of the Bastion, Hive Guard and Flyrant on the Venom in the top, middle of the board. But with secure Objective 1 [in the centre of the board] and have three Tyranid units and none of my opponents within 12" of my board edge I couldn't quite secure any Maelstrom missions. 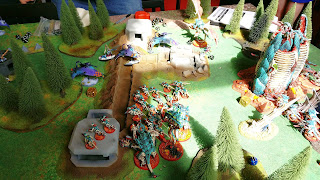 Max disembarked some Harlequins who flipped over my Termagants so they could target the Carnifex with their Fusion Pistols - wiping it out. 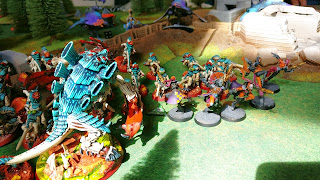 My Trygon Prime and Genestealers had come on in a hope of removing the Dark Reapers in the ruined bunker. They'd failed their charge, or I didn't even bother with the woods adding 2" to their charge. They then paid the price with the Tygon being shot to pieces, I think from a Soulburst action at some point. 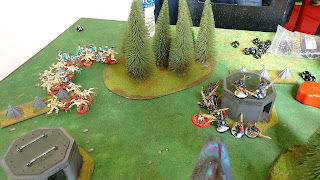 I suddenly remembered I had Command Points so re-rolled a save and he went back in place with just 3 wounds left - foolish? 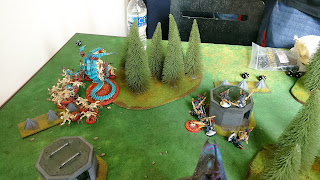 The Venom on my left got destroyed and it's occupants took revenge on the Tervigon - the one saving grace it was too far from my gaunts to cause any synaptic backlash. 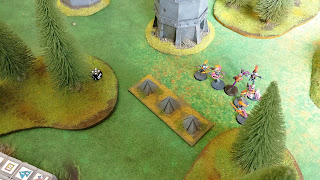 More Harlequins somersaulted through my lines, killing the second Carnifex 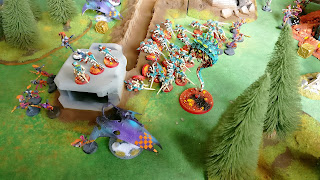 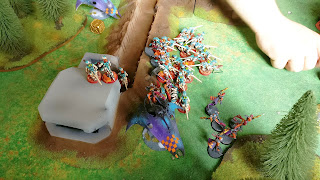 The other Troupe used their Fusion Pistols to surgically take apart the Bastion, killing a Hive Guard in the process. This left the Aeldari exposed allowing my Warriors to whittle their numbers down a bit. 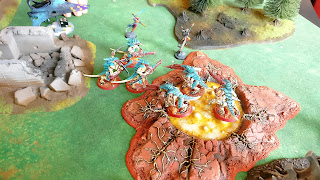 Teragants suffered some more casualties and with no Synapse battle shock took a further toll. 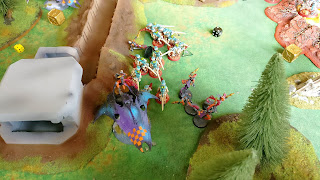 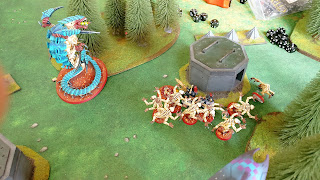 And made them pay the price for their visious long range attacks. Unfortunately their consolidate left them far away from the remaining action and my Rippers were hoping to secure an objective. 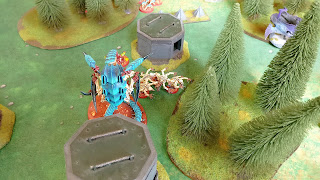 However they were shot off the board and thr game came to a close. 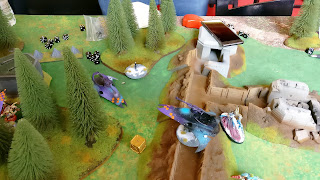 Max had secured the most kill points so scored 8VPs for that. He also beat me for Maelstrom Mission points and gained another 8VPs. He secured 2 bonus VPs for King of the Hill [most units in the centre of the board] and Slay the Warlord. He failed to get First Strike [kill a unit in your first turn] but I got it in mine. Final score 18:1 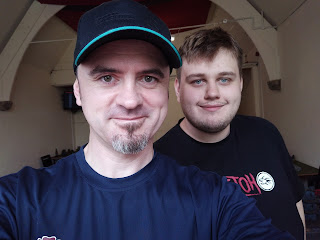 Max was a great player, subsequently I found out he'd previously won the WarhammerFest GT and in his next NWO match tabled Richard Hope from Geeks Wargaming. The fact I still had some units on the board made me feel a little better about the loss, but it was a really relaxed game and any moment where things had gone wrong, he brushed the errors aside with no issue. For instance Max was unaware my Trygon Prime had synapse so hadn't ensured he killed it outright [no doubt thanks to my re-rolled save], when he realised it was anchoring the Genestealers a casual "mistakes were made" and we moved on. To have someone so successful in tournaments and yet play so casually without forcing an issue and so keep the game flowing was a real pleasure, not to mention his army was really nice too. Onto game 2.
Posted by 40kaddict at 12:55