This Country - King of the Nerds 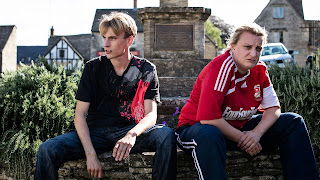 I remember a documentary about fans of Dr Who, where folk reminisced about the glory days of the 80s and 90s and that if the Doctor turned up in any programme other than the show, it was such an 'event' for a Whovian. I'm sure as hobbyists we all get a bit of a thrill when GW turns up in something unexpected, even Newsthump, The Onion or Daily Mash! I mean how many times has that still been shown of Enemy of the State where Will Smith's son is reading White Dwarf? Here it is again, it'll never go away:

Anyway it's not that picture I'm sharing with you for the GW cameo, but something else. Recently I was swayed by a good review of a BBC3 comedy called This Country. Now I'm a big fan of comedies, I strongly believe that life can be miserable enough and spending some time watching programmes made to make you laugh is time well spent [if they're funny of course]. The fact the two main characters wrote, star and even managed to get it made deserves a bit of support.

This Country is a bit of a slow paced comedy, similar in vein to The Detectorists. In fact on first viewing I imagine they inhabit the same locale. It's a 'mockumentary exploring the lives of young people in modern rural Britain.' I'm sure it'd be a wonderful eye-opener about a certain aspect of youth in this country for my international readers, but imagine you can't access it outside the UK. Sorry, that's because of the unique way the BBC is funded.

Anyway, episode 4, entitled 'King of the Nerds' features more than just a passing cameo of Warhammer, although it's not the best episode in the series so far but it's still amusing. It's not quite as cringeworthy as The Office [by which all mockumentaries are judged] but I guarantee most hobbyists will giggle, then rage a little about some random made-up rules and then immediately chide themselves with the subsequent scenes - I did. The jokes aren't completely at our expense so don't worry ;) It is worth noting that that's a Chaos Dreadhold - Overlord Bastion in the shot so I'm wondering if that was bought for the show as everything else looks 'older'. 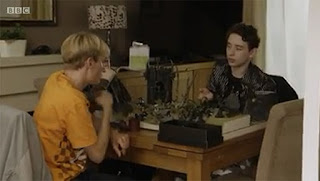 Anyway you can check out the episode here [more episodes in the link above].:
http://www.bbc.co.uk/iplayer/episode/p04sx02t/this-country-4-king-of-the-nerds
Posted by 40kaddict at 12:03