As mentioned yesterday, in a bid to do something, anything other than tackle the black of the Ravenwing I jumped ship to the Genestealer Hybrids and paintign their environment suits grey. The Acolytes were up first, I'm not sure how many I did that first night but it was such an onerous task I was actually regretting this course of action and wondering if those Ravenwing weren't so bad afterall!? 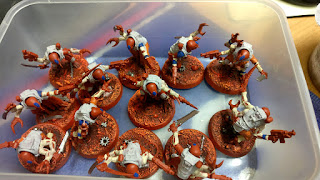 The Neophytes were actually much worse to paint, it was dull and tedious and I think I spread it out over three nights just because I foudn it so unrewarding. As a kickstart to getting back on the Ravenwing it sort of worked but I couldn't leave them half-done so pushed on. 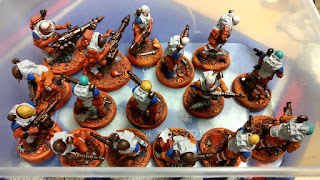 However, the end result is already changing the look and feel of the Hybrids. There's still a lot to do on them but this was a big change to their overall colour balance and chipping away at them like this will once again pay dividends when I tackle them as a priority. Some of the Neophytes need some more base colours on details, there may be some bonewhite to start on the nid arms. Then it's weathering the metals and all the washes which I'm quite looking forward to, despite there being even more to do after that!

Still, it did the trick - I moved them on and I felt the urge to return to the Ravenwing, but can I capitalise on that urge?
Posted by 40kaddict at 12:15