Last of my Genestealer Cult successes so far. As you can see some pretty harsh shadows from the sun on these, that's why two lights help even them out. Still they're not too bad in showcasing what I painted. 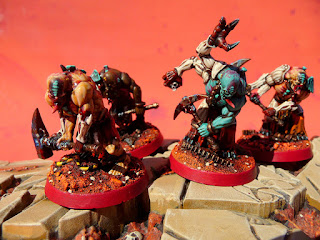 Not 100% sure why these snuck into my painting schedule. Obviously there had been a diversion from the Drop Pods when I was finding them a 'challenge'. I think perhaps because they were only a batch of 4 and with less detail than the Brood Coven they got a head start as something I could just crack on with to feel like I was gettign somewhere. 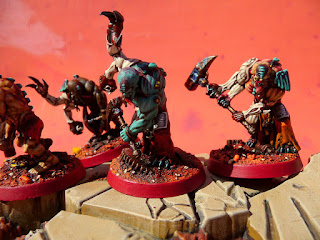 Reconciling my ethnically diverse residents of Ferron Proxima with my Hive Fleet Gorgon was always going to be a challenge. 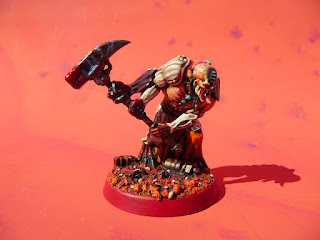 Moreso because of the way they suggest as the hybrids get newer the Genestealer appearance becomes less... Forget that I just did some bits flesh and the other bits nids. Still think I could have added a Free Radical Collective logo on his tabard. 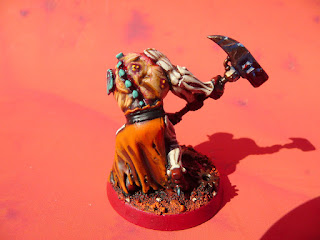 The blue Aberrant was the gamble. I had tried a few when I converted my Dark Vengeance Cultists but I realised this would be a much harder sell. I still wanted that Rogue Trooper feel but this is mixed up DNA where the standard colouration of the Chitin armour has somehow got mixed in with the melanin of the skin. 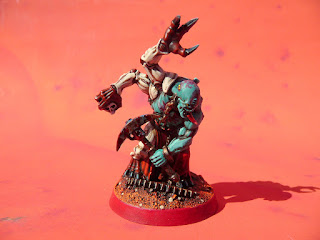 The science is clearly sound, but I htink it worked in the end and even the chitin spine ridges manage to be sufficiently different fromt he skin to stand out. The red/pruple shading in the recesses helped with this. 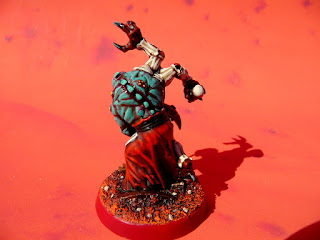 I also wanted a dark skinned Aberrant, again for diversity - the Dark Angel recruits from Ferron Proxima are all dark skinned afterall. It was also an opportunity to try different things, 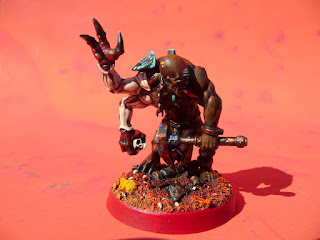 And some of it is much more than I hoped for but I think there's still alot more I can improve. Duncan advises using the Violet wash to make richer shading on dark skinned people [or things] I might need to try it but investing in a wash I'm only going to use once in a while feels like overkill [Deathwatch Overkill?]. 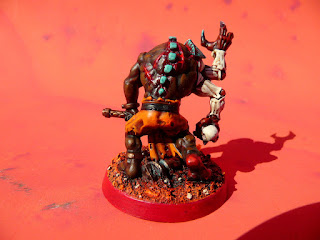 The 'Caucassian' Abberrants actually use my Vallejo Bronzed flesh colour so aren't as pale skinned as both my Magus and Primus. 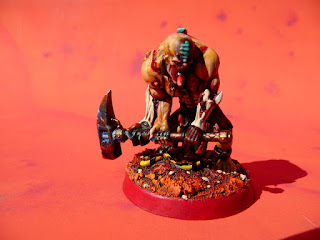 Should I do the other four Aberrants that gives me scope for even more variety but I'm still not sure on what I'll do. 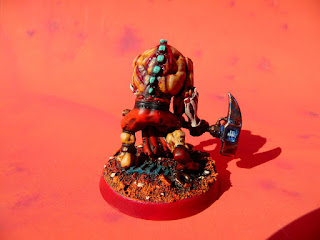 Here we go with the new light box setup. It was a bit of a snap shot, which is why it's a little blurred in places or the focus isn;t quite right. The colours are OK, perhaps a little too much contrast, even for my liking. 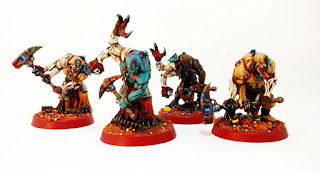 The one disappointment with these was the power weapons, the glows in the coils were OK, it's the 'lightning' effecton the hammers and picks that just didn't work, hence why I tried to cover most of them with Tamiya Clear Red X-27 blood spatter. 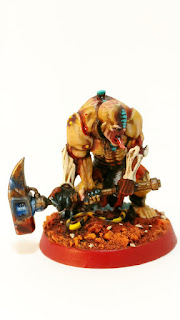 Overall though I can live with it because they're done, I got to do things differently, they don't look bad and best of all they're complete which is why I get the Big Purple Stamp of Approval!