Doogie Doyle was my game 2.

The low down:
His list had some similarities to mine, think it was an Imperial Fists faction with bikes, two units of scouts, two Whirlwinds, three Rapier Quad Guns, a Thnderfire Cannon and a bunch of bikes including a Chapter Master with all manner of upgrades and bonuses 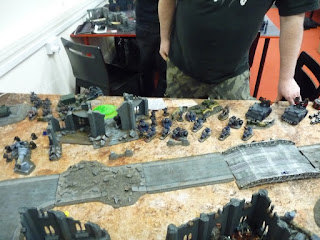 This was my set up and I was lucky enought to steal the initiative. 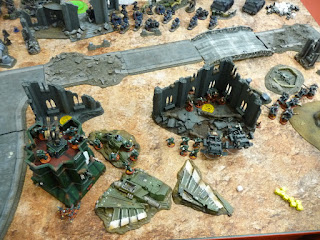 This meant I got my drop-pod in and Brother Cask managed to destroy the missile launcher on one of the Whirlwinds. My Ravenwing managed to kill one of the bikers but the unit had all sorts of saves and re-rolls thanks to the Chapter Master it was nigh indestructable. Knowing how durable the Rapier Battery was and even the scouts I suddenly realised the task I had ahead of me. 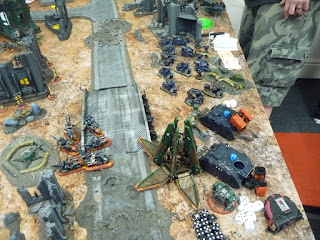 Doogie focussed on the Ravewing in his turn. Not sure how many got killed but they don;t appear in any other pictures so they may have succombed at some point, if not this turn maybe later. Doogie scores a VP for holding Objective 1. 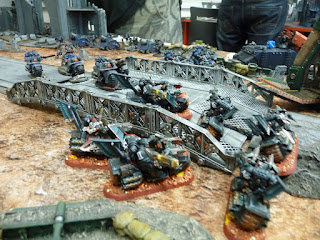 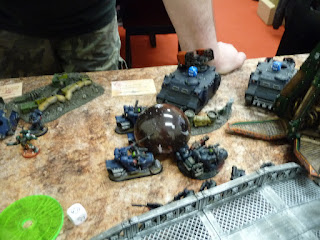 Gotta love D weapons as Doogie's bike squad gets sucked into the warp. Meanwhile my Drop Pod Tactical squad fired ont he Rapier Battery, to little effect. Doogie actually suggested I put the drop pod there to hamper his own shooting, so again the spirit of the event prevailed. 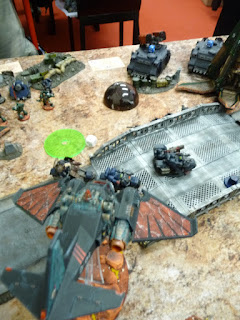 Brother Cask Melta'd the nearest Whirlwind to slag and then vaulted over it's smouldering wreckage with a 12" charge to go punch it's squadron buddy, wrecking that too [First Blood?]! BEAST! 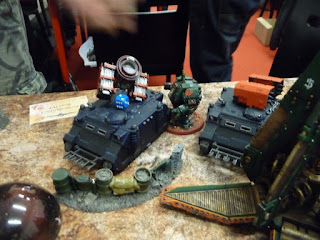 Doogie's turn 2 and the Vortex is drawn to the Dreadnought, stripping a hull point off his sarcophagus. He picks up 2 VPs this turn - making it 3:1 in his favour. 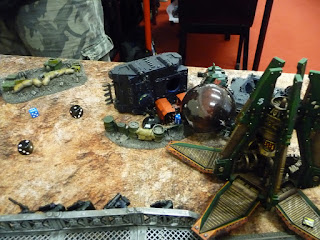 My turn 3. Having targeted ground troops with the Quad Gun I remember skimmers are shot at full BS and there's one sneaking up my flank - not for long! 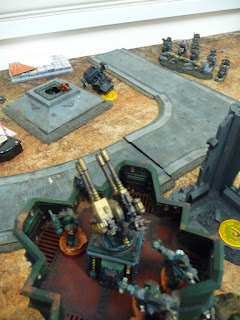 His bikes followed up but with little weaponry strong enough to harm the Bastion they aimed at the Devastators instead. 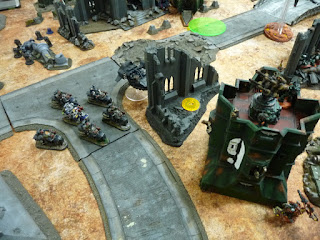 They'd lost two already but they couldn't survive the relentless attack. Doogie scores another 2 VPs for objectives 5 and 1 [because of the mission he could steal my objective card!] 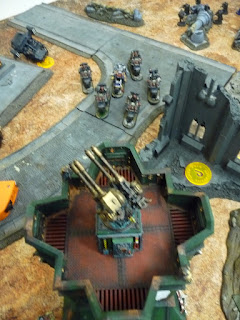 I remembered the Deathwing this time, they mishap though and end up in the corner of the board - idiots! 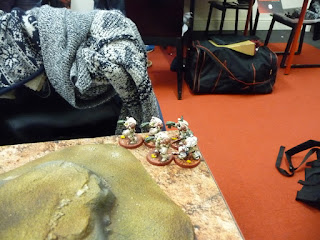 What remained of my Plasma Cannon Tactical Squad entered the bastion with the Techmarine to take control of the building. I manage to score objective 5 for a VP. 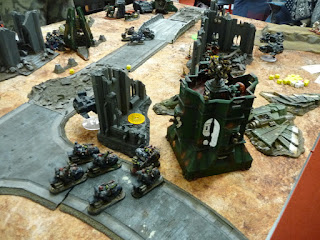 What remains of the Chapter Masters bike squad ends my drop Pod and my Tactical Squad is killed too. 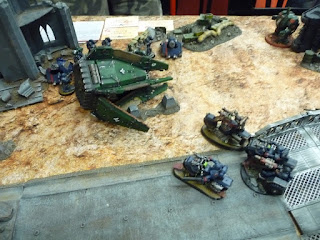 The final score is 4:7 to Doogie. I must work out how to tackle those artillery batteries, they were super tough and durable. The Chapter Master too was nigh unkillable with so many saves and bonuses, He's someone you want in your army! 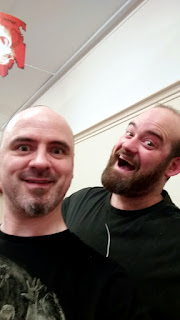