I did my first 'true' Ravenwing feathers near enough a year ago and now I'm back doing them again. I just went with the Army Painter Turquoise first. I did refer back to the original post and was reminded of the two techniques I'd employed and for some reason chose this as my preferred option. So far I have six of the standard bikers done, not to mention all of them have now had their black elements neatened up and even done the highlights for the red seat leathers. 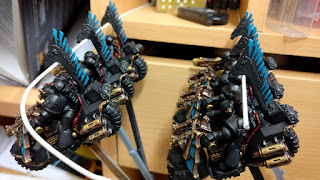 As you can see the Ravenwing banners come in quite handy for resting the bikes as they dry. I'm not sure if I mentioned the whole sprue underneath thing, probably thought it was self-explanatory. However, you can see all the bikes have a piece of sprue glued to the nifty little cuboid underneath the bike footrest. This is to hold the figure while I paint it. Then when the bikes done I can snap/cut it off and a quick dab of black will remove any trace it was there. Of course that means it's a bit difficult to rest as thin paint dries but I discovered this handy tip - hooking the banners on some wire. 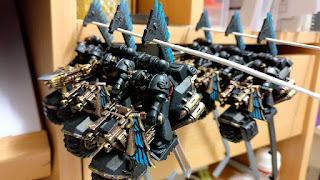 Before I finished for the night I did a qquick highlight on one of the bikes. 2nd gen Anita's provided the 'pre-thinned' turquoise I needed. As you can see, particularly on the back banner, the Army Painter turquoise has quite the contrast with the black. It's not smooth blending at all so I'll have to work out how to feather that in as a coat or two of Army Painter Dark Tone won't quite transition that degree of contrast. I'm sure I'll figure it out, I may even try some Baham Blue in there as there's sufficient room to feather things.

It does seem a bit odd to highlight the bottom edge of each feather but nothing makes sense in the grimdark universe. They all look incredibly bright at the moment, again beecause of the large surface area of each feather on these older back banners. 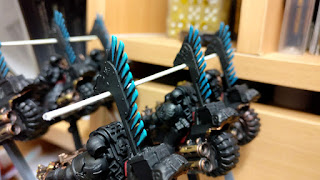 Hopefully I can tone it all down, it's odd to do these bikes with the original Ravenwing upgrade sprue - slighty different challenges to the Dark Vengeance and Ravenwing Command Bikes who all share similar front wing and back banner feather sculpts. Bottom line I found my muse/mojo again. Although I took a night off following these [to be fair I'd had  the day off so had finished the black during the day as well] I'm really eager to get all the feathers done all the bikes, get the colours shaded right back and start highlighting/shading the actual black. Again it's weird as the Land Speeder Dark Shroud or even the Genestealer Cult should be the items I'm focussing on in an attempt to throw them into the Double Trouble mix. The Dark Shroud was achievable but I can't reconcile the mounting of the Icon of Caliban and whether to magnetise it alongside the Plasma Battery for the Land Speeder Vengeance - so it's stalled completely. Likewise the Genestealer Hybrids if completed could potentially make a 750pt GSC alongside my existing kitbashed Cultists and genestealers. But, it;s the bikes that are occupying my thoughts and efforts and they'll be a welcome addition to my Dark Angels if I can get them done.
Posted by 40kaddict at 12:13