As I'm planning to run a Tyrannofex with Acid Spray at Caledonian I thought it worthwhile finishing up this little conversion. With the Tervigon's birthing sac glued in place the normal feed cannot reach around it's gravid womb so I needed to extend the tubes. Perhaps I should have taken some earlier pics but I'm not in a 'posterity' mood at the moment. What I did do was split the ammo feeds and then use floral arrangement wire to extend the pipes. Getting the wires to fit was extremely fiddly and then bulking them out was equally frustrating. I tried rolls of Milliput but it's just not elastic or adhesive enough and the more you roll it into tubes the more it wants to crumble apart. I managed to do two of the feeder pipes and then pulled the remainder off in preference of Green Stuff. 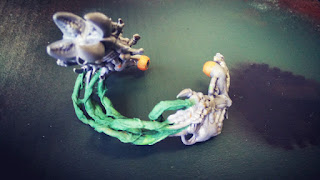 This is in fact the first Green Stuff I've ever bought/used and I must admit it did a much better job of bulking out the wire to look like tubes but my sculpting was slapdash at best so I tried to cover up my difficiencies with my old standby - PVA coated string to create veins. It wasn't too bad although the fibres in the string were far more apparent than I'd hoped. A few coats of liquid greenstuff later and I think I made a much better finish to it. I mean my Green Stuff sculpting is woeful, but this effort is sufficient. With that in mind I undercoated the weapon, gave it a spray of Bonewhite Army Painter where needed and then picked out all the fleshy red bits. 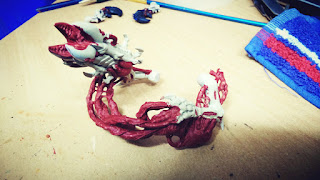 I then painted the chitin plates ready for the first sepia wash. 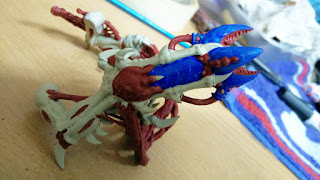 Two birds with one stone - these crushing claws are a hangover from my last Carnifex and I've never found the time to get them finished. As soon as the Acid Spray progress aligns with these I'll be tagging them on to painting so they can be completed. 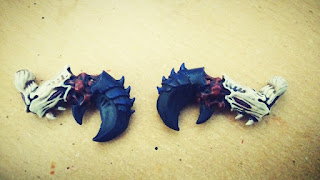 This is actually a nice little 'between projects' job - an amuse-bouche to cleanse the palate and stimulate excitement for the next big job. The only problem with doing these is they don't feel like something worthy of completion. They're not on my list for a start and they're not a complete figure either. However, each claw is similar in scale to a Termagant and the Acid Spray is equivalent to a Lictor at least. I'll get my head round it eventually, it's only a week or two of work afterall and then I can see what's next...
Posted by 40kaddict at 12:17