With the Imperial Knight complete it's time to move onto the Bastions and Quad Gun. Initially the Bastions did not appeal so I went small - the Heavy Bolter emplaced weaponry needed doing and I was really pleased with the shading I did with just watered black that gave quite a dishevelled finish. Still a little weathering and detail on the servo skulls but a good start. 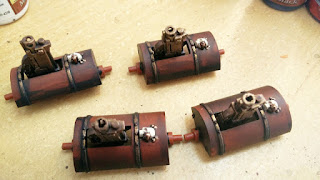 I then moved onto the Quad Gun, got some green highlights on the base, did the metallics on the banding  and the gun itself. 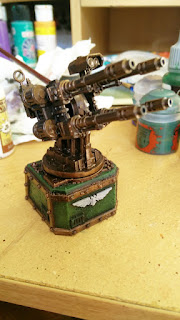 Reconciling the colours on the top section was challenging, it;s been on my mind for a few weeks now but the solution was simple enough once I did it. I still wanted some green on top, it still had to have that Dark Angel connection as too much brass was going to kill it.

As you can see I'm a few days on from this now - three days doing the Quad Gun and still not complete. I also put in a session on the Bastions - more to come next time. 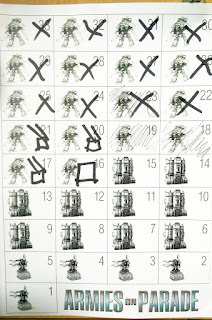