PeteB has just finished his own man cave, of which I'm immeasurably jealous of because it's his garage converted so there's tons of space and not only is there room for gaming but also a couch! So with a bit of effort [borrowing back the Land Raider he traded with me] he's managed to cobble together enough Khorne imps to create a 1500pt army suitable for 40k. That was handy as it fit my Caledonian  requirements and given the combination of Eternal War, Maelstrom and all the 'secondaries' it was the perfect opportunity to try out the combined missions and christen the Man Cave. That said the battle report is a little short on pictures and details as I was paranoid about the tournaments strict 3 hour game limit. but I thought I'd still share it.


The low down:
Pete only deployed the Juggernauts, his Lord biker and the Land Raider so his turn was over in about five minutes with very little to show for it. In return I swooped my Flyrant forward and advanced the Carnifex with Malanthrope support. It was here I began to question his inclusion. For sure his Synapse is welcome, I was painfully aware how limited I was for Synapse but equally he's my cover bonus which is welcome alongside the Hormagaunts and Carnifex but always the cornerstone of my Skyshield defence. That said if the new FAQs are in place I won't get benefit on the Fortification anyway. But the overall thought was - Synapse was in short supply and two Venomthropes might have been preferable [although I only have 1 so perhaps a second is needed?].

Anyway the Tervigon perilled on Dominion [trying to keep the Rippers in Synapse] losing a wound. The Flyrant targeted the Juggers, but with the biker in front he took the brunt of his shooting... 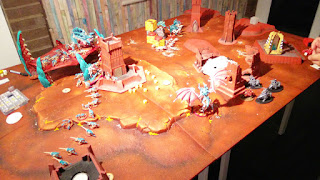 6s and 2s The Flyrant started off quite well. 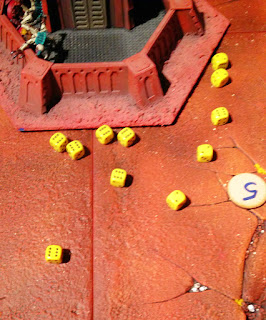 Which resulted in the Biker Lord dieing. This secured me quite a few VPs straight off the bat. I had predominantly non-objective Maelstrom missions so killing units and characters gave me a few VPs, plus Slay the Warlord and First Blood. Pete came back next turn but couldn't really do very much his reserve rolls were hampered by my Warlord Trait. I think the Flyrant was forced to Jink though when his Bloodthirster threw some pretty heavy duty shots his way!

Turn two and I picked up some objective cards that meant I was going to have 3 VPs in the bag should I hold what I already had. The Tyrannofex arrived in the Spore Pod, the Juggers may well have been erased this turn thanks to the shooting I had available but I couldn't touch the Land Raider so just had to ignore it. 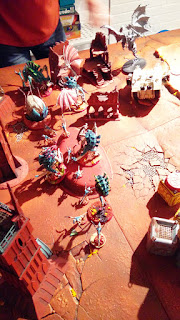 Petes go, and the Chaos Marines charged the Genestealers. Typically I'd already taken two or three casualties so knew I was unlikely to survive this charge. The Broodlord took on the Sergeant, slaughtered him, which got me a VP but he was chopped up with the rest of the brood. I think there were about 5 left in the squad. 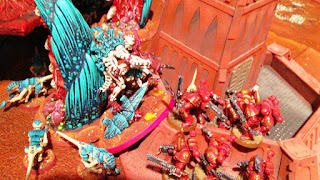 Shooting-wise I was able to put some wounds on the Bloodthirster thanks to the combined Dakkafex and Tyrannocyte he did fall out of the sky at one point [may have been here] but passed his invul save on his final wound. The Bloodletters arrived. 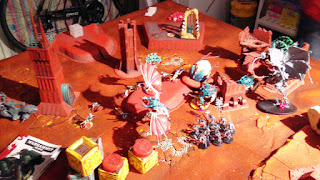 So did the Soul Grinder and some more summoned juggernauts. With the Bloodthirster now on the ground he tag teamed the Soul Grinder and the pincer moved the T-fex killing him with ease. One of the Carnifex had 2 wounds taken off the other was on 1. I debated where to send the Flyrant, in the end he swooped over to the Juggers - Psychic Scream doing the nasty on them and mopped up with Brainleech worms. 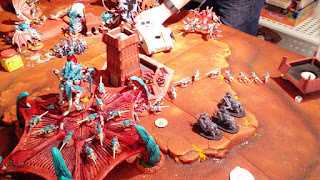 The Soul Grinder managed to kill one of the Carnifex. The Termagants were then tied upwith the remaining Space Marines who did a good job of thinning their numbers. I think it took the addition of the Tervigon to break the deadlock, two or three rounds of combat! 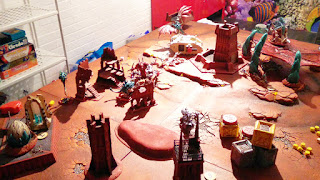 The game came to a close about 11:30 can't recall if the Soul Grinder survived but the Land Raider was unscathed. 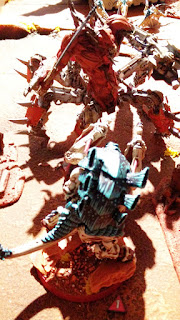 PeteB had scored 3 Maelstrom points and captured one objective for Eternal War. I forgot to check how much it's value was so just scored them all at 3 VPs each. So he came away with 6. I'd scored 12 Maelstrom points and claimed 3 objectives for 9 Eternal War points. I also got Slay the Warlord, First Blood and Linebreaker for 24 VPs. It was an unfortunate return to 40k for Pete, in fairness though a reserve army hampered by -1 to reserve non optimised was a tough match up. That said the make-weight choice of the Land Raider was pretty much the only thing I couldn't touch and it delivered the Marines where they were extremely effective.

I'm at least confident in the list though, definitely the right decision to drop the third Carnifex for the Tyrannofex. He didn't do much but he was a target and two units are better than one. Overall it was confidence boosting and surprising that even when I got the non-objective Maelstrom cards I could deliver, the smaller tournament deck certainly helped.
Posted by 40kaddict at 12:11